Accessibility links
After 'Bizarre' Moves, What's Next For Fractured House Intel Committee? : The Two-Way The chairman discussed evidence with the president without sharing it with the committee. The top Democrat on the committee says that's "disturbing," and the rift between them is raising eyebrows. 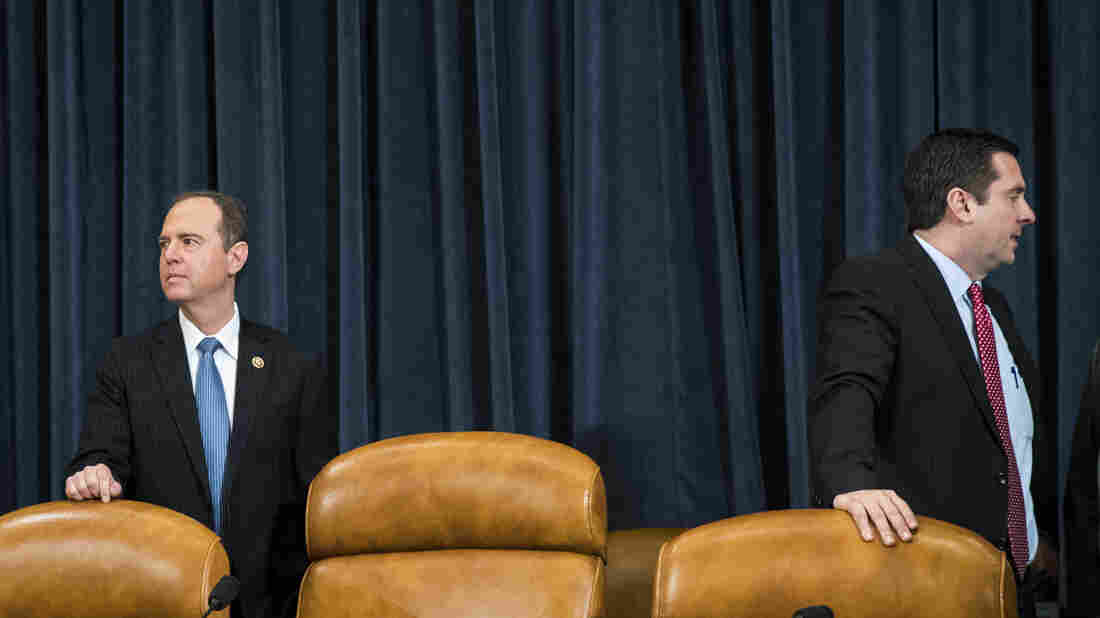 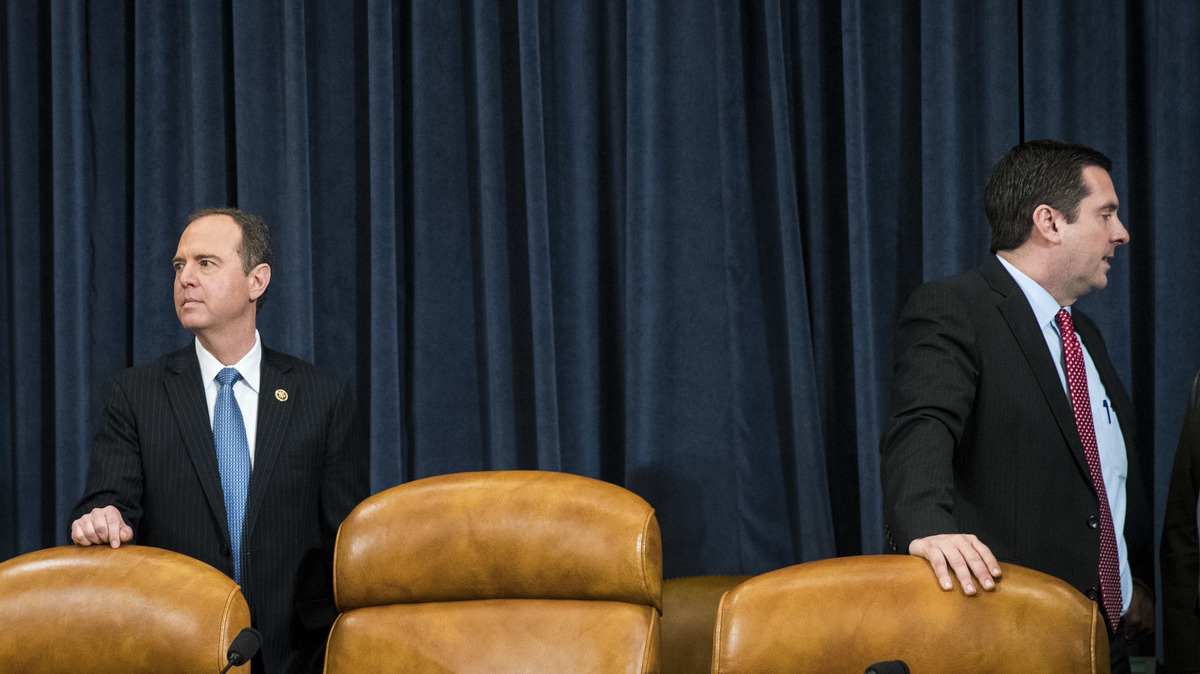 The outlook for a key congressional investigation into potential ties between President Trump and Russia's election meddling remained in doubt Thursday, after an unusual, high-profile flap involving its top two members.

Committee Chairman Devin Nunes, R-Calif., has reportedly apologized for briefing Trump, on what he described as evidence that Trump and his aides were caught up in U.S. surveillance operations, while keeping his committee in the dark. And ranking member Adam Schiff, D-Calif., appeared to confirm reports that the U.S. has serious evidence of coordinated activities between the Trump campaign and Russia during the election.

As NPR reported Wednesday, Nunes raised eyebrows when he said he had "new intelligence" from unidentified sources about members of the Trump campaign being caught up in surveillance of foreign targets. Instead of sharing that information with the members of his committee, he made an announcement to reporters — then briefed Trump.

The outcry on Capitol Hill was immediate and impassioned. Schiff said Wednesday that his chairman will "need to decide if he's leading an investigation into conduct which includes allegations of potential coordination between the Trump campaign and the Russians, or he is going to act as a surrogate of the White House. Because he cannot do both."

Schiff told NPR on Thursday morning that Nunes still hadn't shared the intelligence in question with his colleagues on the committee. He says it was "wholly inappropriate" for Nunes to brief Trump and not the committee, given the active investigations into the Trump campaign.

"Everything about it was wrong," Schiff said. He called Nunes' actions "disturbing" and "bizarre."

Nunes has reportedly apologized to the members of the committee for talking to the press and the president before talking to them.

Dueling disclosures, for and against Trump

At least one person welcomed Nunes' unusual choice of how to handle classified information.

Trump, you'll remember, has accused former President Barack Obama of "wiretapping" him during the election — a stunning claim, presented without evidence, that has been rejected as baseless by prominent lawmakers and the heads of multiple intelligence agencies. Trump said he felt "somewhat vindicated" by Nunes' briefing, although nothing Nunes said suggested that Trump or his associates had been targeted for surveillance.

Meanwhile, Schiff stepped forward after Nunes' surprise announcement to drop a bombshell of his own. He said that the committee had now seen "more than circumstantial" evidence suggesting coordination between the Trump campaign and Russia.

Previously, he had only said there was "circumstantial evidence" of such coordination. He tells NPR the committee has been receiving "additional information" every day, and he sees the current evidence as "not merely circumstantial."

"While I can't go into ... any of the contents of the evidence we've been presented," he said, "I think that's a fair assessment at this point."

That means the top Republican and top Democrat on the House Intelligence Committee are both describing classified material to the press — one of them to bolster the president, another to tear him down.

This is happening even as the committee they helm is investigating, in part, the mishandling of classified information — including the precise kind of intelligence that Nunes, at least, appeared to be describing.

What's next for the investigation?

The tension between the two men is palpable, and the very public failure of bipartisanship in this investigation has raised concerns about whether the House committee will be able to do its job at all.

McCain told MSNBC the astonishing rift between the two men heading the House investigation suggests that Congress lacks the credibility "to handle this alone."

"I don't say that lightly," he said. He said the situation requires a select committee, created just to investigate Russian influence over the election — which Schiff, too, has called for.

But as NPR's Phil Ewing noted Wednesday, calls for an independent investigation raise an obvious question: Would the Republican leadership in Congress be willing to appoint, fund and empower a special panel to investigate their own president?

Meanwhile, there are other investigations into possible coordination between the Trump campaign and Russia — most prominently, by the FBI and the Senate Intelligence Committee.

But those proceedings are happening almost entirely behind closed doors.

The House committee was unusual in holding hearings open to the public.