Accessibility links
U.S. Says Its Mosul Airstrikes Hit Area Where Civilian Casualties Are Reported : The Two-Way As many as 200 civilians were reported killed in western Mosul, where a US-led coalition is fighting ISIS. It's not clear whether the rules of engagement have changed. 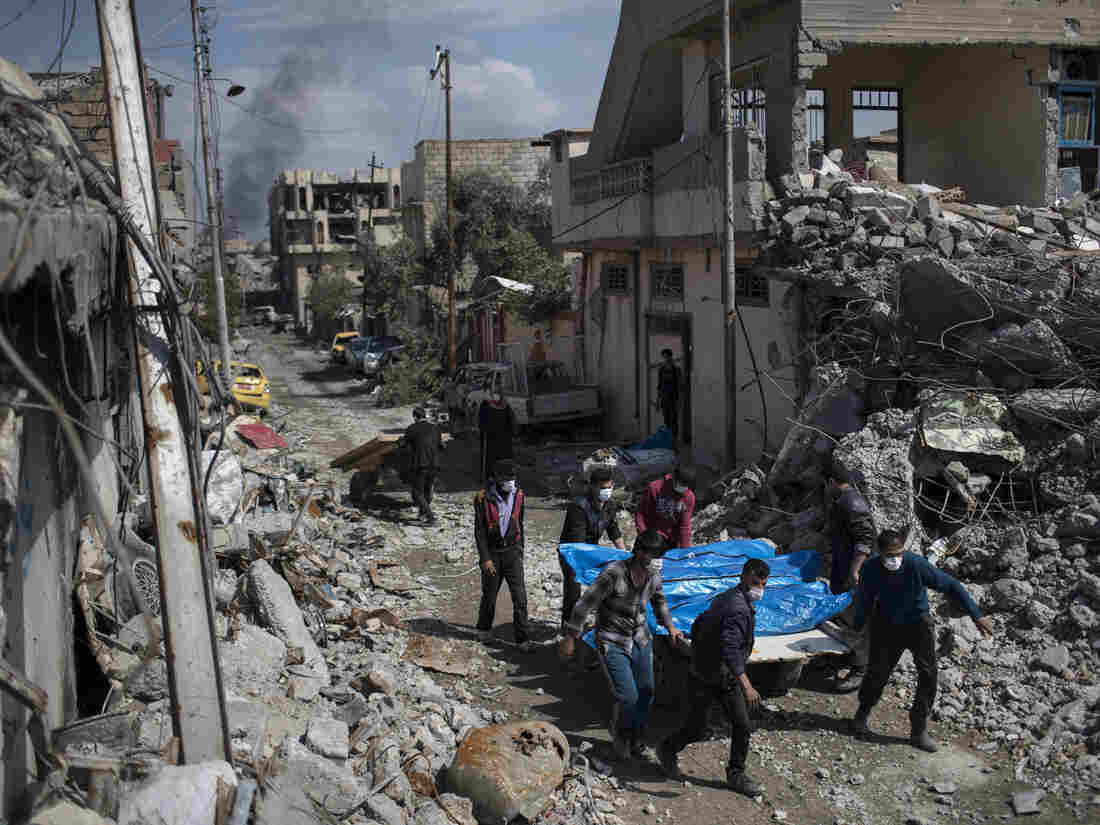 Residents carry the body of several people killed during fights between Iraq security forces and Islamic State on the western side of Mosul, Iraq, yesterday. Residents of the Iraqi city's neighborhood known as Mosul Jidideh at the scene say that scores of residents are believed to have been killed by airstrikes that hit a cluster of homes in the area earlier this month. Felipe Dana/AP hide caption 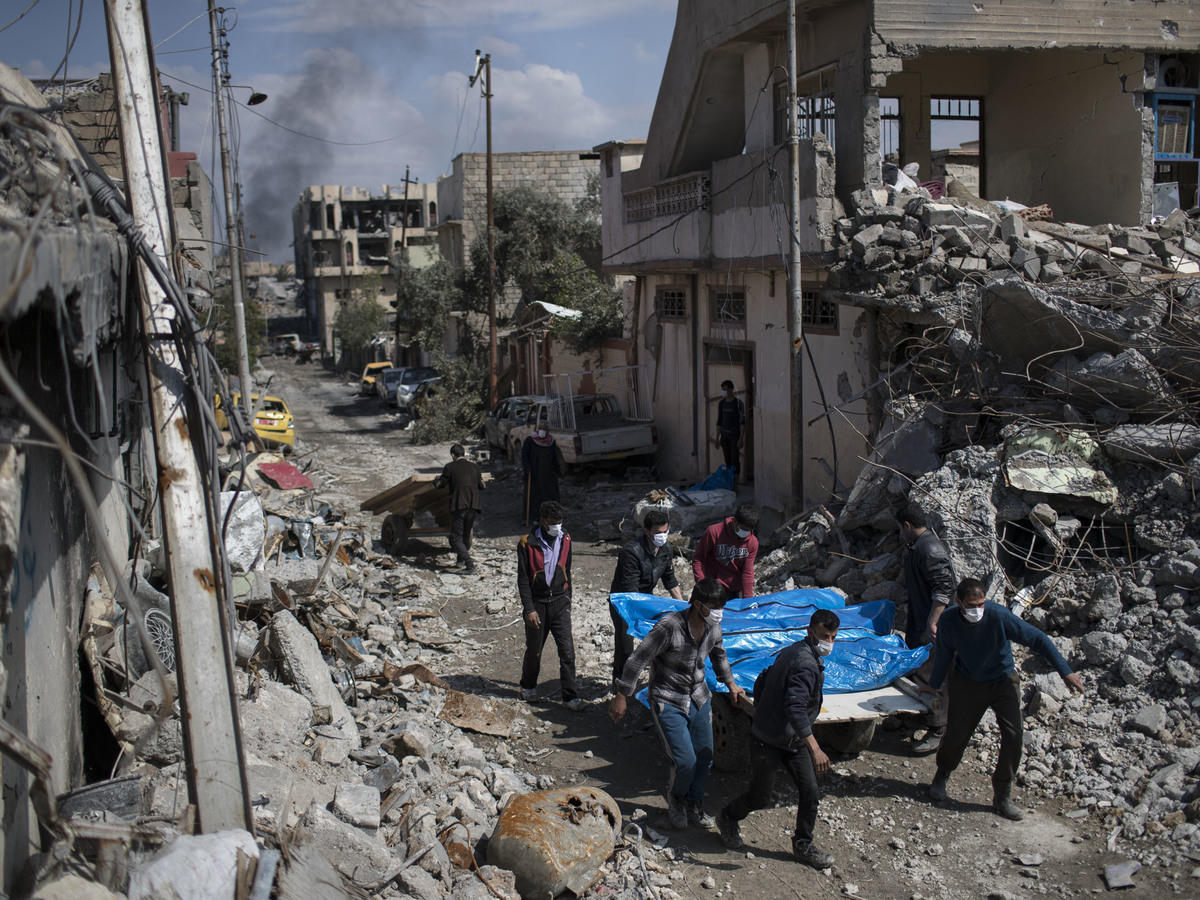 Residents carry the body of several people killed during fights between Iraq security forces and Islamic State on the western side of Mosul, Iraq, yesterday. Residents of the Iraqi city's neighborhood known as Mosul Jidideh at the scene say that scores of residents are believed to have been killed by airstrikes that hit a cluster of homes in the area earlier this month.

As Iraqi forces backed by the United States ramp up efforts to take Mosul back from ISIS, there are reports of scores of civilians killed by airstrikes from a U.S.-led coalition.

In a statement, the United States Central Command admitted that its airstrikes had hit an area where civilian casualties have been reported.

The Central Command said that an initial review of strike data from March 16-23 indicates that "the Coalition struck ISIS fighters and equipment, March 17, in West Mosul at the location corresponding to allegations of civilian casualties." It said a formal assessment had been opened to determine the facts surrounding the strike and the validity of the charges that civilians were killed.

As NPR's Alice Fordham reports, an Iraqi rescue worker, Abdelsalam Abdelkadir, said his team had recovered dozens of bodies and thinks there are many more under the rubble of a densely-populated neighborhood of western Mosul. "He said ISIS was using people as human shields, and that he didn't know whether the strikes were by Iraq's air force or the U.S.-led coalition against ISIS," Alice reports.

There has been no official announcement by the U.S. that restrictions designed to prevent civilian casualties have been lifted, Alice reports. But there has been a sharp uptick in reports of civilians killed in airstrikes in Iraq and Syria in recent weeks.

The Associated Press says its reporters saw at least 50 bodies recovered from the wreckage of buildings following recent airstrikes.

Capt. Jeff Davis, a Pentagon spokesman, told the New York Times that there has been "no loosening of the rules of engagement."

Captain Davis said that the investigation was looking into whether Islamic State fighters were responsible for the explosion in Mosul, or if an airstrike set something off.

"There are other people on the battlefield, too," he said. "It's close quarters."

In an earlier statement this morning, the coalition said that its forces conducted six strikes in Iraq yesterday, including five near Mosul. The six strikes consisted of 46 engagements "coordinated with and in support of the government of Iraq against ISIS targets," according to the release.

Figures on the number of civilians killed by coalition airstrikes in Iraq and Syria since 2014 vary widely, according to the AP. The Pentagon has acknowledged 220 civilian deaths (not including last month's fighting), while independent monitoring groups put the figure might higher, at over 2,700.

The United Nations expressed "profound concern" about the reports of mass civilian casualties in Mosul. "We are stunned by this terrible loss of life and wish to express our deepest condolences to the many families who have reportedly been impacted by this tragedy," said Lise Grande, the UN's Humanitarian Coordinator for Iraq. "International humanitarian law is clear. Parties to the conflict — all parties — are obliged to do everything possible to protect civilians. This means that combatants cannot use people as human shields and cannot imperil lives through indiscriminate use of fire-power."

The UN reports that more than 330,000 people have been displaced by the Mosul crisis. "Families are at risk of being shot if they leave and they are at risk if they stay," said Grande. "Hundreds of thousands of civilians are trapped and they are in terrible danger."