Accessibility links
Russians Take To The Streets In Nationwide Anti-Government Protests : The Two-Way Russian opposition leader Alexei Navalny is among hundreds who were arrested in Moscow and other cities on Sunday, as tens of thousands took to the streets to protest against government corruption.

Russians Take To The Streets In Nationwide Anti-Government Protests

Russians Take To The Streets In Nationwide Anti-Government Protests 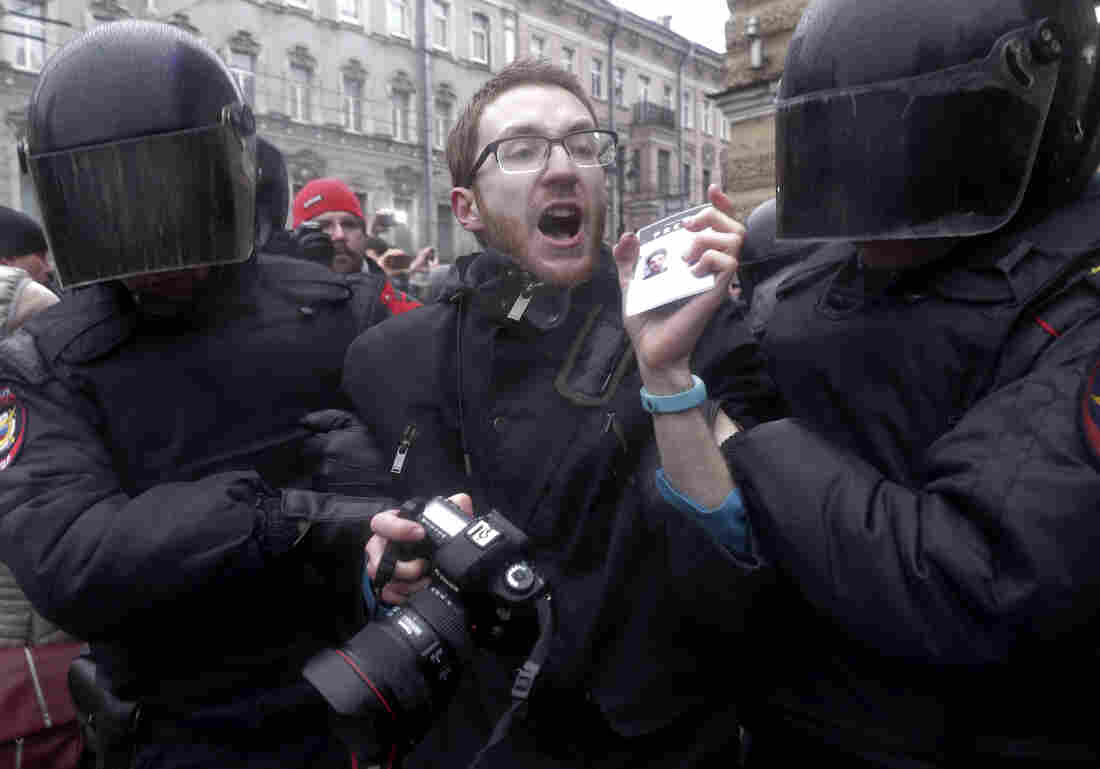 Riot policemen detain a journalist during a protest rally in St. Petersburg, on Sunday, where thousands crowded in for an unsanctioned protest against the Russian government. Dmitri Lovetsky/AP hide caption 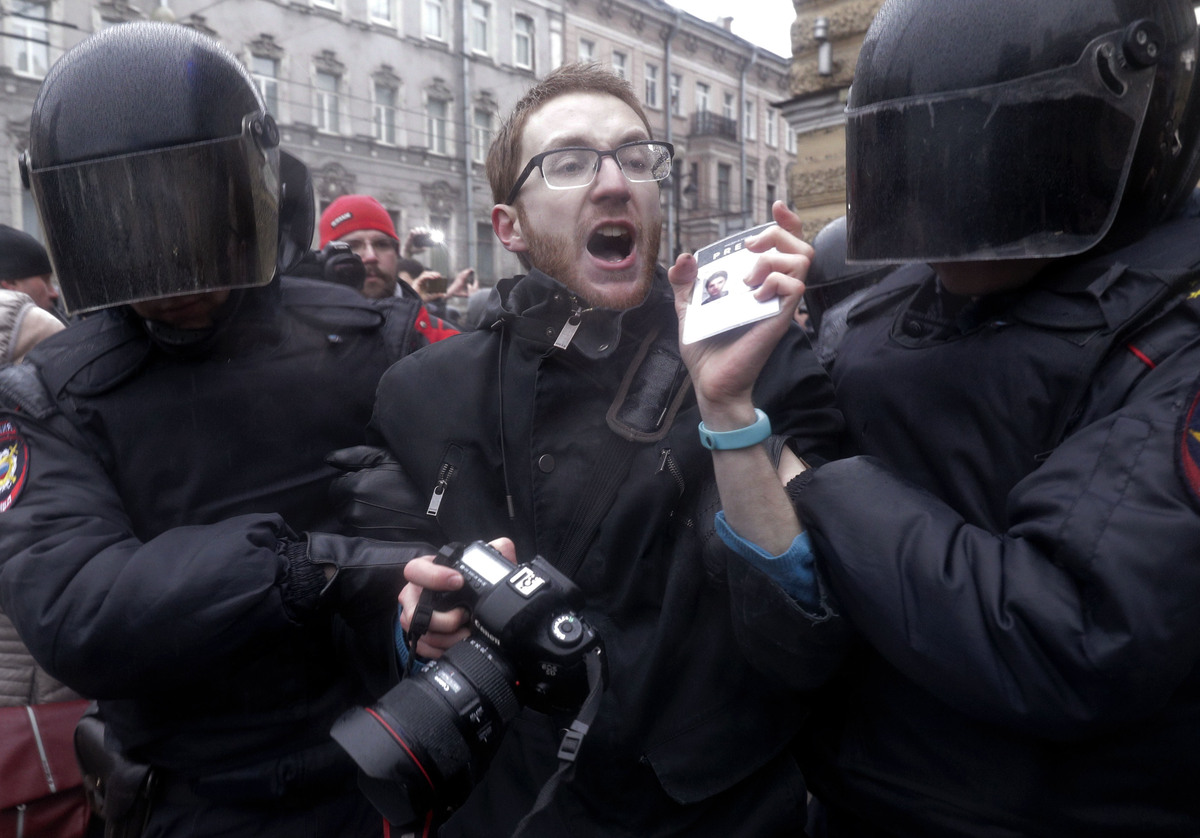 Riot policemen detain a journalist during a protest rally in St. Petersburg, on Sunday, where thousands crowded in for an unsanctioned protest against the Russian government.

In a rare show of force, thousands of Russians took to the streets of Moscow and other cities in the biggest anti-government protests in years.

In Moscow, police arrested hundreds of demonstrators, including prominent Russian opposition leader and anti-corruption activist, Alexei Navalny, who orchestrated the uprising. On Monday, officials announced that Navalny will serve a 15-day jail term, saying that he disobeyed police.

"Under laws passed in the wake of anti-government protests in 2011, Russians must request protests be sanctioned by the government or face imprisonment and fines," reporter Charles Maynes tells NPR from Moscow.

Maynes adds, "Police report over 600 were detained over the rallies — but human rights groups say the number is higher."

As for the Kremlin's reaction, presidential spokesman Dmitry Peskov said the protests were "instigated" by organizers and were carried out by misguided people.

"We cannot respect those who deliberately misled underage minors promising them some payment in return for participating in an unauthorized protest, thereby exposing them to danger," Peskov said, according to state-run news agency Tass.

At least 500 demonstrators were arrested in Moscow, reporter Charles Maynes tells NPR, among the tens of thousands who turned out nationwide — despite warnings from authorities that protesters would face fines and arrest for taking part in the illegal protest.

But Navalny saw little of the protest he organized. Maynes says "Riot police detained the opposition leader as soon as he arrived in downtown Moscow, with Navalny supporters briefly attempting to pry open the police van that held him," in the capital's iconic Pushkin Square.

A total of 17 employees with Navalny's Anti-Corruption Foundation, were also arrested, the foundation's director and press secretary Roman Rubanov tells Reuters. The AP cites sporadic scuffles, most notably, "a gray-haired man whom police dragged along the pavement."

Russian state media, meanwhile, mostly ignored the day's events, save for earlier cursory coverage, and no comments have been reported from top Russian politicians.

Following criticism of the Trump administration's silence on Sunday's crack down, the State Department condemned the arrests by evening, calling the move "an affront to core democratic values." Spokesman Mark Toner said "the United States will monitor this situation, and we call on the government of Russia to immediately release all peaceful protesters," adding that Washington was "troubled" to hear of the arrest of Russian opposition figure Alexei Navalny.

Sunday amounts to "the biggest show of defiance since the 2011-2012 wave of demonstrations that rattled the Kremlin and led to harsh new laws aimed at suppressing dissent," says the AP. At the time, President Vladimir Putin accused then Secretary of State Hillary Clinton of inciting the protests.

Navalny is also credited with instigating those demonstrations, when he first rose as an anti-Kremlin threat through his blog and social media. As NPR's Lucian Kim reported, "he called on Russians to go out on the street and protest voter fraud in the parliamentary elections."

A fierce Putin critic, Navalny plans to run for president next year, when Putin's term ends. Putin is expected to run for a fourth term.

But last month, Navalny was found guilty of embezzlement in a case he claims is politically charged to disqualify him from running for president.

Though the candidate is essentially barred from state media coverage, as reporter Charles Maynes says, his heavy internet presence appears to be helping him use his anti-corruption message to expand his base, and attract younger crowds.

"Navalny has united people who think the same; that people don't agree with the authorities is obvious from what is going on in the country today," 19-year-old Anna Ivanova told the AP at the Moscow demonstration. "I am a bit scared."