Activists Chu Yiu-ming, left, and Chan Kin-man gesture to supporters as they report to be arrested at a police station in Hong Kong. Police say the men and other Umbrella Movement activists will be charged over mass protests that took place in 2014. Jayne Russell/AFP/Getty Images hide caption 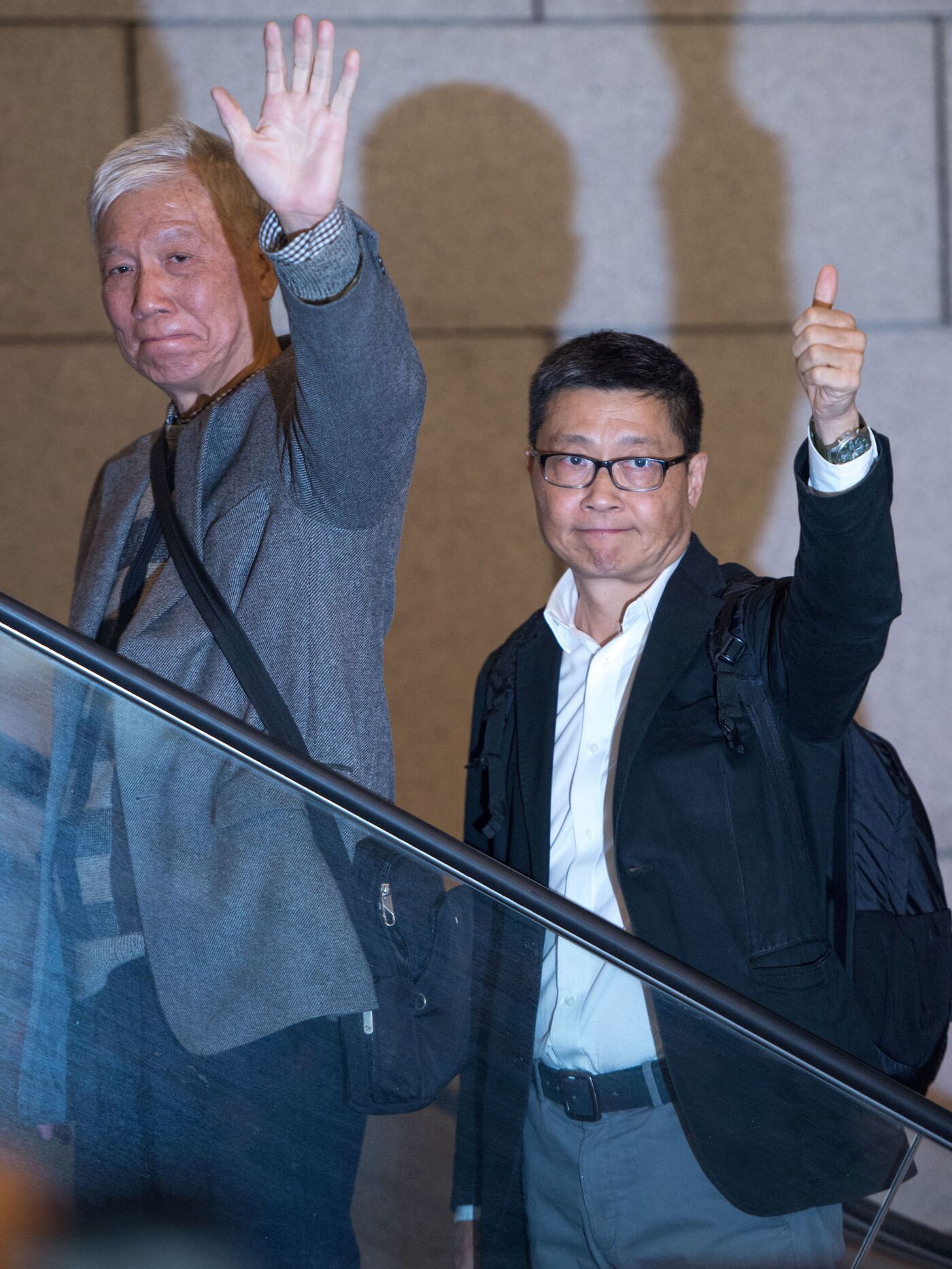 Activists Chu Yiu-ming, left, and Chan Kin-man gesture to supporters as they report to be arrested at a police station in Hong Kong. Police say the men and other Umbrella Movement activists will be charged over mass protests that took place in 2014.

Leaders of the large and unprecedented pro-democracy protests that roiled parts of Hong Kong in 2014 have been told to report to police on charges of causing a public nuisance, in an apparent crackdown that comes one day after Hong Kong selected a new chief executive.

On Monday, police called at least nine people behind the Umbrella Movement demonstrations to inform them of the charges, which could result in jail time, according to the South China Morning Post. In its rolling coverage today, the newspaper said that leaders of the group have reported to a police station to be arrested.

"This kind of political persecution will not destroy our determination to strive for democracy," the Morning Post quotes one of the organizers, Chan Kin-man, saying. Even if I am jailed, I will be proud that I have joined the Umbrella Movement."

Demonstrators gathered at the police station where Chan appeared along with his fellow activists Benny Tai and Chu Yiu-ming.

The arrest orders quickly sparked speculation over whether they were ordered by the current government in collaboration with the incoming chief executive — who spoke about the importance of unity after her win on Sunday — or perhaps with the intent of influencing her policies.

"The arrests come just a day after a mostly pro-Beijing election committee selected Carrie Lam as the city's next chief executive. Lam had backed a Beijing plan to reform Hong Kong's electoral law that spurred tens of thousands of protesters to shut down the city's financial district for more than two months in 2014," NPR's Rob Schmitz reports from Shanghai. "After yesterday's election, Umbrella Movement leaders announced they would organize citywide protests for July 1, Lam's first day in office and the 20th anniversary of Hong Kong's handover from Great Britain to China."

The Umbrella Movement, also called the Umbrella Revolution, was named for demonstrators' use of umbrellas to protect themselves from both the elements and from police pepper spray. The Occupy Central activists had called for the protests after it became clear Hong Kong's residents wouldn't be able to participate in direct democracy, with an open field of candidates.