Accessibility links
AP Calculates North Carolina's 'Bathroom Bill' Will Cost More Than $3.7 Billion : The Two-Way The Associated Press tallied up business lost because of the controversial law, based on interviews and public records. The AP says its estimate of $3.76 billion over 12 years is probably low. 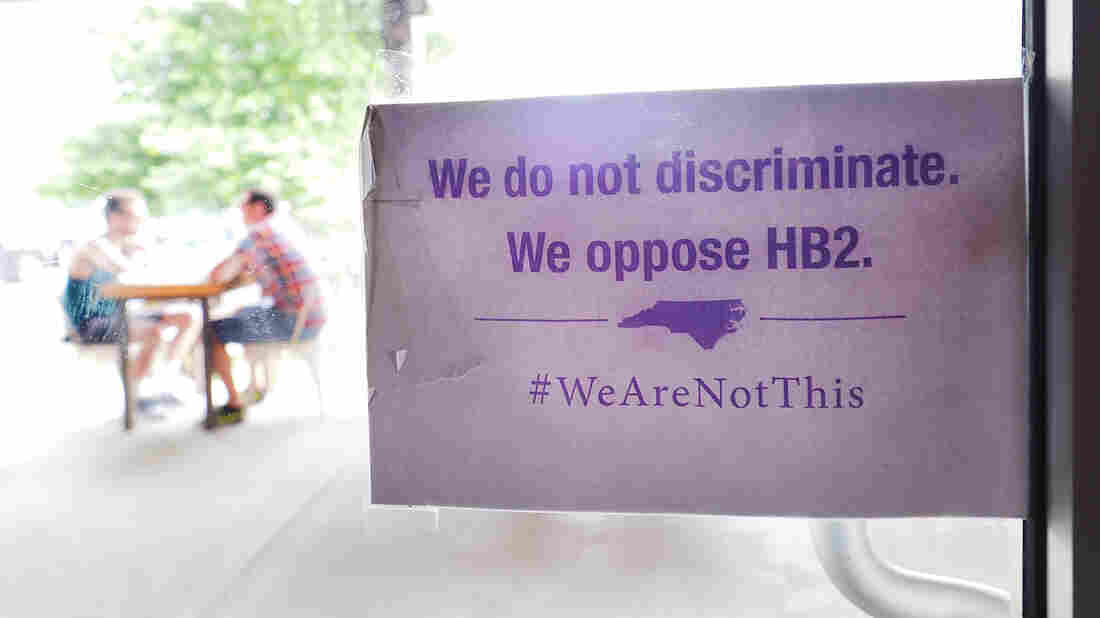 The "We Are Not This" slogan is posted at the entrances to Bull McCabe's Irish Pub in May 2016 in Durham, North Carolina. The sign is protesting a law that has been in place for a year now; the AP estimates it will cost the state some $3.7 billion in business over 12 years. Sara D. Davis/Getty Images hide caption 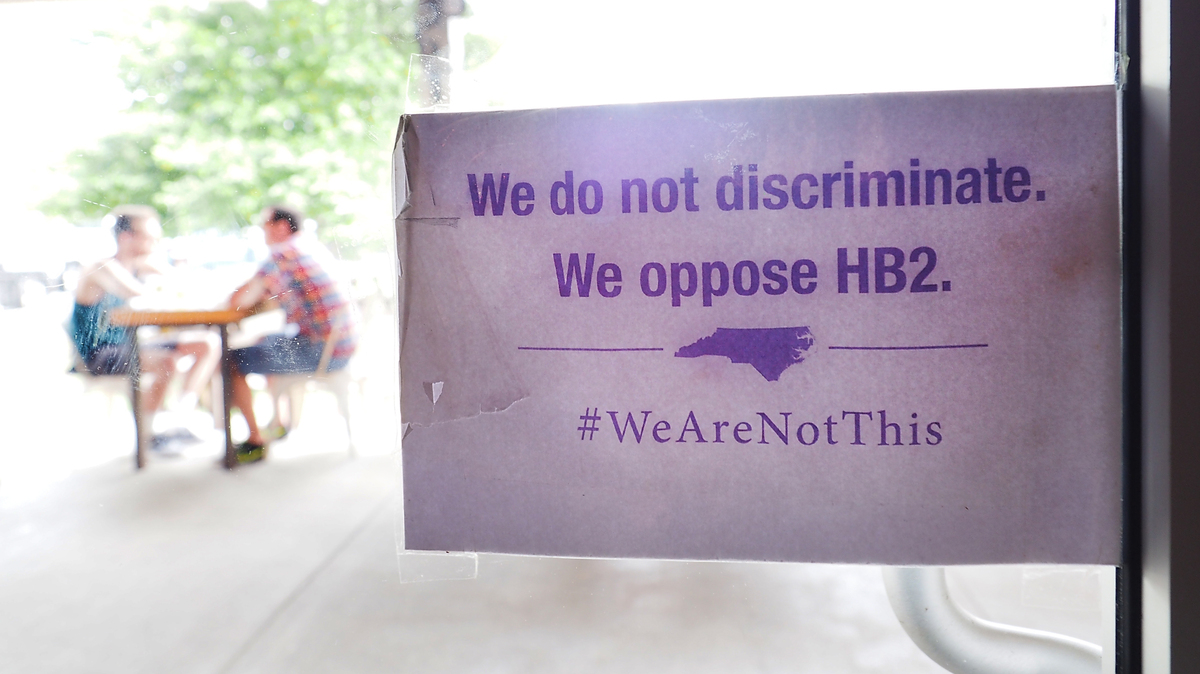 The "We Are Not This" slogan is posted at the entrances to Bull McCabe's Irish Pub in May 2016 in Durham, North Carolina. The sign is protesting a law that has been in place for a year now; the AP estimates it will cost the state some $3.7 billion in business over 12 years.

The Associated Press has tallied up business lost in North Carolina because of the controversial "bathroom bill," and estimates the total cost is at least $3.76 billion over 12 years.

That estimate is probably low, the wire service says.

The law in question, HB2, was passed just over a year ago. It blocks local jurisdictions from passing protections for gay and transgender people, and requires transgender people in government facilities to use bathrooms that match the sex on their birth certificate.

The bill has prompted a backlash from businesses and sports organizations, from Paypal to the NCAA. In December, the state and the city of Charlotte struck a deal to repeal the law, but it fell apart amid accusations of bad faith, and the law remains in place.

To estimate how much the bill has cost the state, the AP drew on interviews and public records to tally up canceled relocations, conventions, projects, concerts and sporting events.

"A business project was counted only if AP determined through public records or interviews that HB2 was why it pulled out," the wire service writes. Some business leaders are concerned that decisions might be made "quietly," where HB2 is a factor but not publicly discussed as such, AP notes.

You can read the full piece from the Associated Press here, and see the full list of events and projects here.

The largest loss is also the highest profile one: $2.66 billion from Paypal backing out of plans to expand a center in Charlotte, creating some 400 jobs.

Other major blows, according to the AP's estimates: a half a billion dollars from Deutsche Bank canceling plans in Cary, N.C., a quarter of a billion from CoStar opening a research center in Virginia instead of North Carolina and $100 million from an NBA All-Star Game being moved out of Charlotte.

The AP notes that North Carolina is, in general, doing well economically:

"The vast majority of large companies with existing operations in the state - such as American Airlines, with its second-largest hub in Charlotte - made no public moves to financially penalize North Carolina.

"Shortly after he signed the law, Republican then-Gov. Pat McCrory issued a statement assuring residents it wouldn't affect North Carolina's status as 'one of the top states to do business in the country.'

"HB2 supporters say its costs have been tiny compared with an economy estimated at more than $500 billion a year, roughly the size of Sweden's. ... Lt. Gov. Dan Forest, one of the strongest supporters, accused news organizations of creating a false picture of economic upheaval."