Accessibility links
Calls Mount For Ban On 'Cyanide Bombs' After Death Of Family Pet : The Two-Way An M-44, which sprays predators with sodium cyanide, detonated on a teen and his dog earlier this month in Idaho. Now the family and others are petitioning the USDA to end its use of the devices.

Canyon Mansfield and his dog were walking the ridge line near his house in Pocatello, Idaho, when the 14-year-old spotted a curious device that looked like a sprinkler nestled in the ground.

When he reached down to inspect it, the device detonated, erupting with a "loud popping noise that knocked Canyon off his feet" and dowsed his face and clothes with an "orange, powdery substance," The Idaho State Journal reports.

After cleaning himself off, Mansfield turned to his dog — only to find the 3-year-old lab with "red froth coming from his mouth and his eyes turning glassy," Mansfield later told the newspaper. 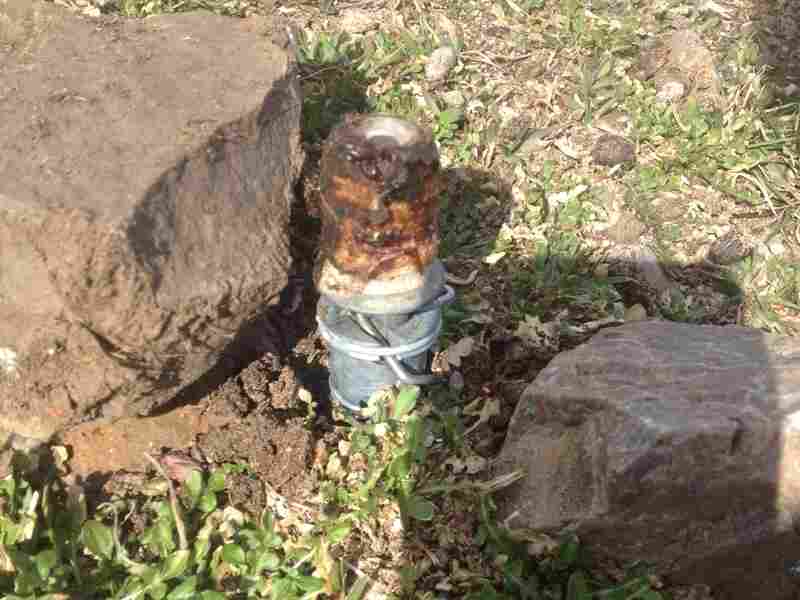 An M-44 device — also known as a "cyanide bomb" for the way it sprays sodium cyanide — sits nested between two rocks. Several petitions are now calling for the removal of these devices used to protect livestock from predators. Mark Mansfield, father of a boy accidentally sprayed March 16 in Idaho, calls M-44s "neither safe nor humane." Bannock County Sheriff's Office hide caption 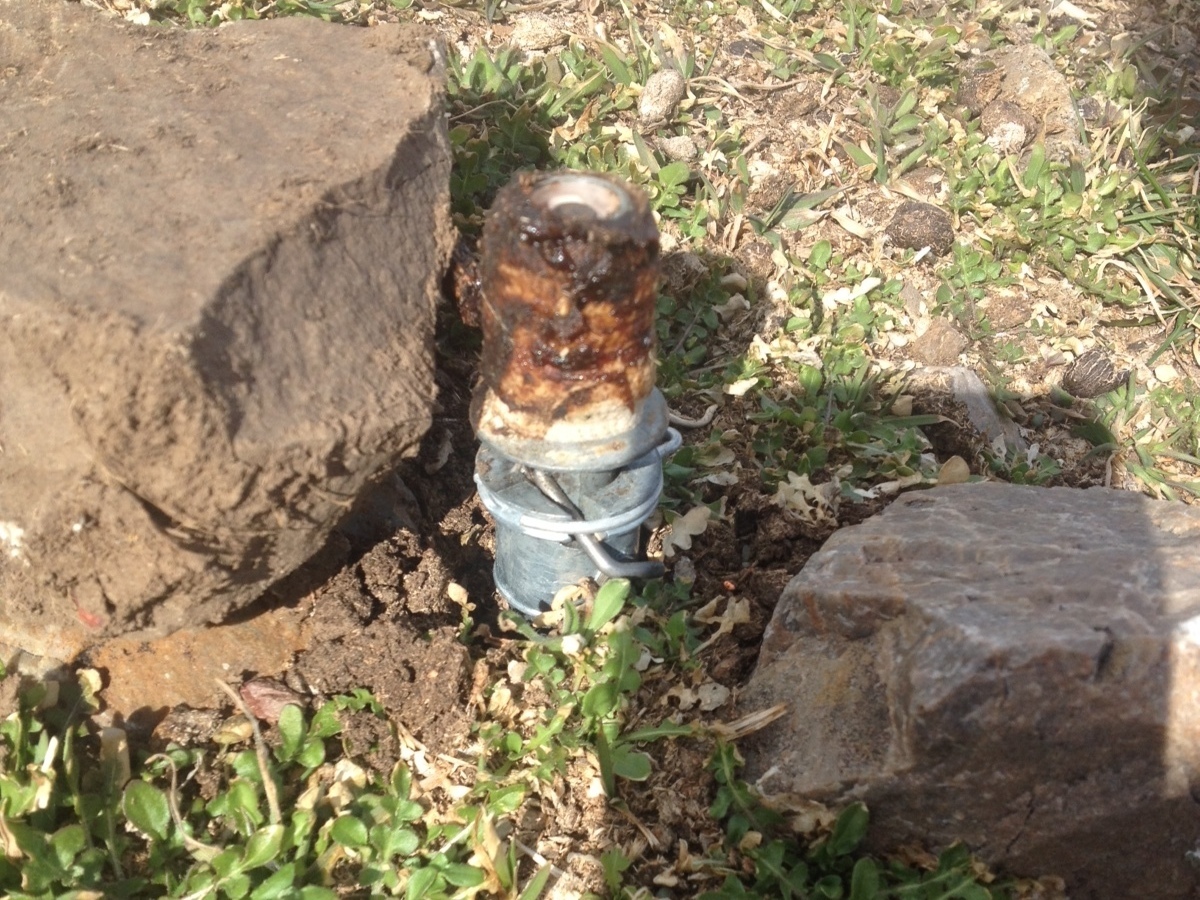 An M-44 device — also known as a "cyanide bomb" for the way it sprays sodium cyanide — sits nested between two rocks. Several petitions are now calling for the removal of these devices used to protect livestock from predators. Mark Mansfield, father of a boy accidentally sprayed March 16 in Idaho, calls M-44s "neither safe nor humane."

The device that detonated in Mansfield's face, sent him to the hospital and, ultimately, killed his dog on March 16 was an M-44. Often known as a "cyanide bomb," it's a device used by the U.S. Department of Agriculture to prevent predators such as coyotes from harming livestock on farm and ranch lands. When triggered, the M-44 spits a potentially lethal dose of sodium cyanide powder at the interloper.

"This device is extremely dangerous to animals and humans," the Bannock County Sheriff's Office said in a statement released the next day. "If a device such as this is ever located please do not touch or go near the device and contact your local law enforcement agency."

Which raises a question, asked by Mansfield's parents, conservation groups and federal agencies alike: What was the "cyanide bomb" doing on land owned by the federal Bureau of Land Management, so close to the house of a family unaware of its existence?

According to a fact sheet published in 2010 by the U.S. Department of Agriculture, its Wildlife Services personnel "do not use M-44s on any property unless requested by the land's owner or manager," and when they use M-44s, they are to be marked with bilingual warning signs.

In a statement after the incident, Wildlife Services said the agency "has removed M-44s in that immediate area" and is conducting a review of what happened.

"The unintentional lethal take of a dog is a rare occurrence," Wildlife Services said, adding: "This is the first unintentional take with an M-44 device in Idaho since 2014."

The agency defends its use of M-44s as effective and well-targeted. The Los Angeles Times, citing government data, reports that 12,511 coyotes were intentionally killed by M-44s nationwide last year, compared to the unintentional deaths of seven domesticated pets or livestock.

The USDA told the State Journal that the device that hit Mansfield was placed by one of its employees, though it would not confirm the M-44 was installed on BLM land — a situation nevertheless confirmed by BLM spokeswoman Erin Curtis, who said it was placed there accidentally in February, according to the newspaper.

Installation of that device, then, came months after the USDA said Wildlife Services "would stop using the devices last November on all federally owned Idaho land to reduce health risks to people and domestic animals," The Associated Press reports.

The federal response to the incident hasn't satisfied either the Mansfields or national conservation groups, both of whom filed petitions this week against the use of M-44s.

"The Idaho-based Western Watersheds Project is leading a coalition of organizations petitioning the U.S. Department of Agriculture's Wildlife Services branch to stop using M-44 devices in the state and to remove all devices currently deployed in Idaho.

"Several cases of humans being injured by so-called cyanide bombs are listed in the petition. The document goes on to cite numerous instances of pets being killed by M-44s, which are sometimes installed on private land without the owner's knowledge or just feet from public roads."

"Clearly, it is unsafe and immoral for Wildlife Services to use these poisonous land mines to target native wildlife for killing on lands of any ownership," Erik Molvar, executive director of Western Watersheds Project, said in a statement.

"The USDA maintains they resolve conflict between wildlife and people 'in the safest and most humane ways possible,' but the nature of the cyanide bomb is neither safe nor humane," physician Mark Mansfield, Canyon's father, wrote in his own petition to the White House, according to the State Journal. "Cyanide gas has been used throughout history to murder masses of people."

Canyon's mother, Theresa Mansfield, offered an even more personal rationale for removing them.

"We're still in shock that this has happened," she told the Idaho paper. "Like, someone put a loaded gun on the top of my hill. Someone planted a bomb right out in my backyard, and the federal government makes it so that this is okay. I see this as murder."