Accessibility links
Tillerson Asserts 'Difficult Choices' Are Ahead For U.S. And Turkey : The Two-Way The U.S. secretary of state's remarks at a joint news conference punctuated a day of delicate discussions in Turkey, which is facing a number of issues at home and abroad. 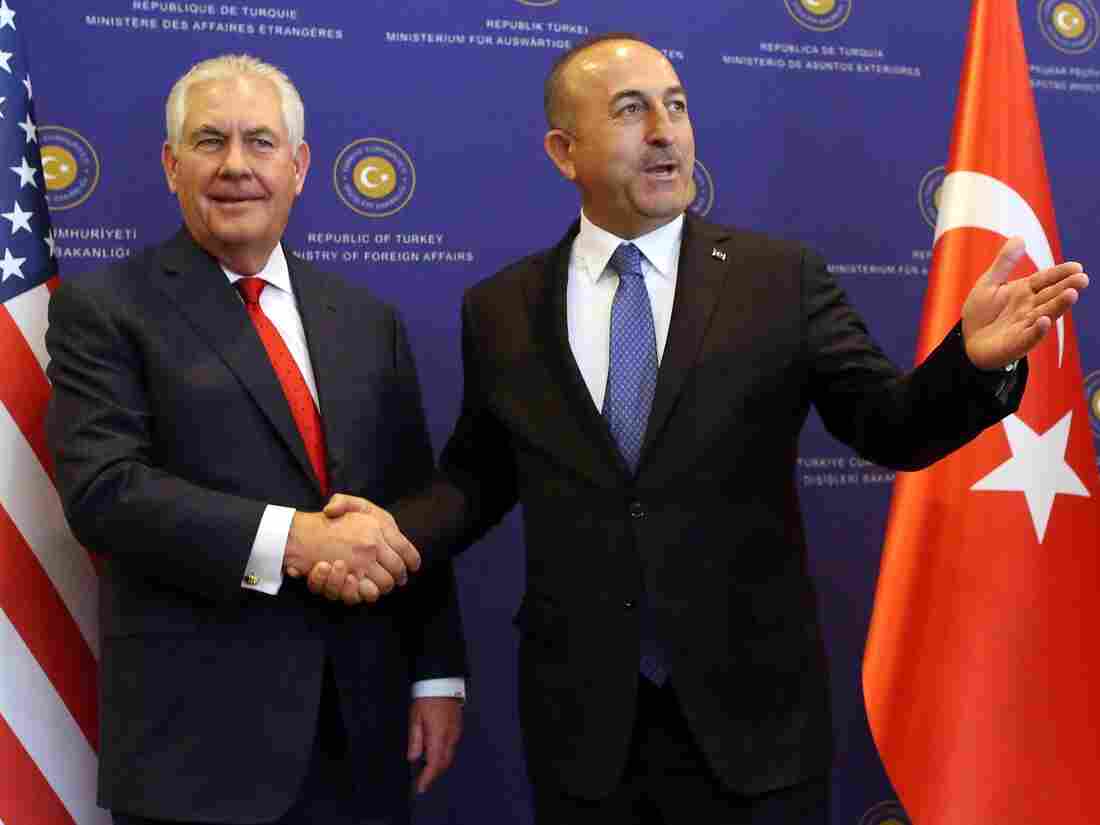 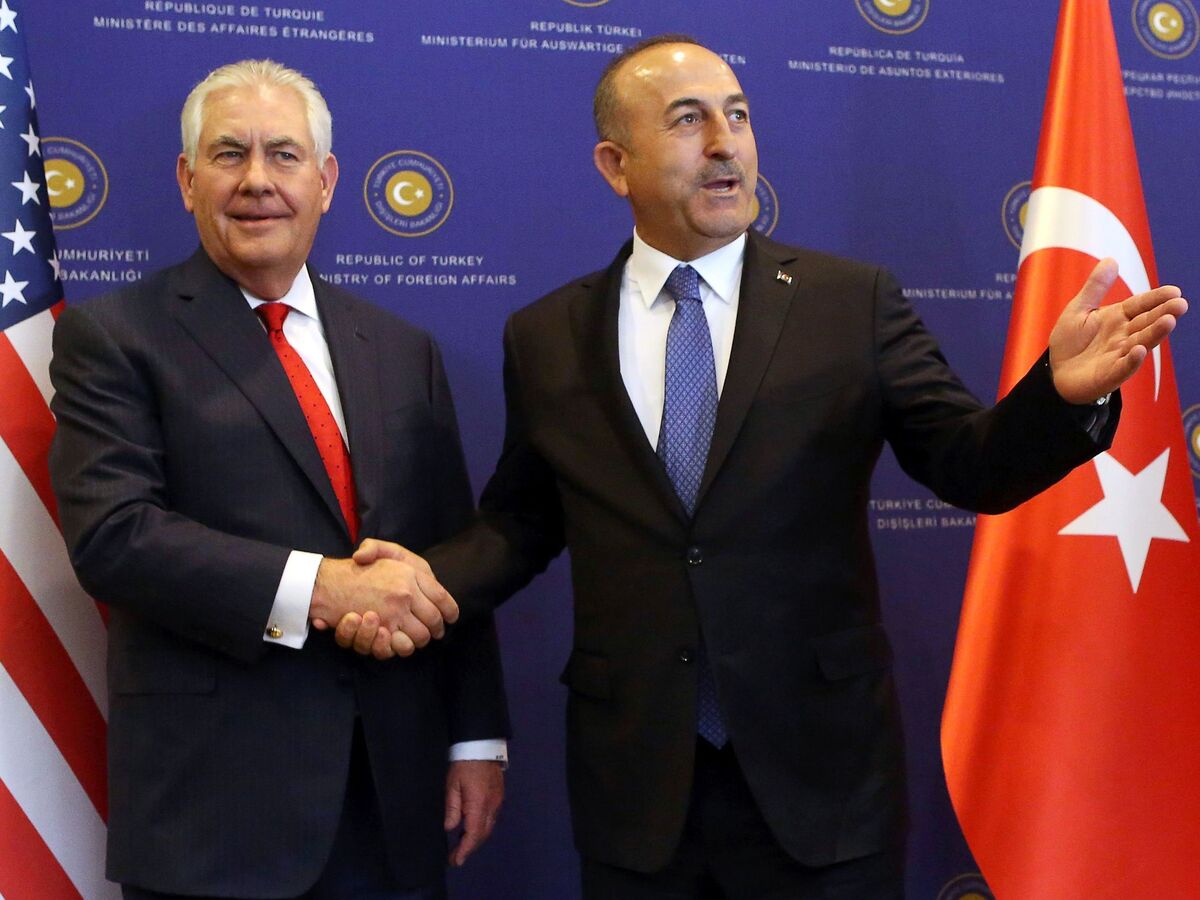 Secretary of State Rex Tillerson appeared at a joint news with Turkish Foreign Minister Mevlut Cavusoglu in Ankara on Thursday.

During his first trip to Turkey as secretary of state, Rex Tillerson said the U.S. and its NATO ally were struggling with "difficult choices" on a strategy to defeat the Islamic State in Syria.

The U.S. has been trying to balance its reliance on Turkey in the fight against ISIS with its support for Kurdish fighters in northern Syria — which infuriates Turkey. Tillerson said he and Turkish leaders discussed options for how to clear the extremist group from its remaining strongholds, such as Raqqa, and stabilize those areas.

"They are difficult options, let me be very frank. These are not easy decisions," Tillerson said at a joint news conference Thursday in Ankara with his Turkish counterpart, Mevlut Cavusoglu.

Still, the secretary of state declared there is "no space" between the two nations in their commitment to the mission.

The remarks punctuated a day of delicate discussions for the American diplomat, who is in Ankara to meet with Turkey's president, Recep Tayyip Erdogan. The visit follows months of political upheaval and a series of devastating terrorist attacks that have left Turkey reeling — and at times at odds with the U.S.

Hints of those points of contention arose during the conference, as Cavusoglu took issue with the arrest in the U.S. of an executive with Turkey's state-run Halkbank who is accused of violating U.S. sanctions on Iran. The foreign minister described the arrest as a "political" maneuver stemming from what he called the former prosecuting attorney's close ties with supporters of controversial cleric Fethullah Gulen.

Erdogan blames Gulen for orchestrating a failed coup attempt in July. The cleric lives in the U.S. and has been a flashpoint for frictions between the two countries. Cavusoglu said Thursday that he expects the U.S. will be taking "concrete steps" toward Gulen's extradition to Turkey.

Tillerson's trip also comes as Turkey grapples with other major issues both domestic and international — such as strained relations with the EU and concerns that a referendum next month will give Erdogan too much power. Here's a closer look at some of them:

Turkey's relations with the European Union are badly strained, with Erdogan comparing Germans and other Europeans to "Nazis and Fascists" after Turkish political events in several European cities were canceled. Those campaign rallies were aimed at getting Turks living in Europe to vote in favor of constitutional changes to give Erdogan broad new executive powers. A number of Western officials have warned that Turkey appears to be heading toward "one-man rule," which Erdogan vehemently denies.

The vote is set for April 16, after which Erdogan has suggested Turks might want to hold another vote — on whether Turkey should continue to pursue its long-stalled effort to join the EU. Analysts suggest both Turkish and European politicians see the current feud as politically advantageous but warn that longer-term damage, both political and economic, could result if ties don't improve.

Turkey's ongoing military conflict with outlawed Kurdish militants from the outlawed Kurdistan Workers Party, or PKK, has destroyed many neighborhoods in Turkey's largely Kurdish southeast. The conflict has also fueled Turkish anger at Washington for working with Syrian Kurdish fighters in the anti-ISIS campaign.

The Pentagon sees the fighters as an effective ground force against a dangerous enemy, with a difficult campaign to oust ISIS from its de facto capital, Raqqa, gearing up. But the Turks see the Syrian Kurds as terrorists, allies of the PKK who are intent on establishing a contiguous Kurdish-controlled zone in northern Syria, something Ankara cannot tolerate.

Tillerson: Defeating ISIS 'No. 1 Goal' for U.S., But Others Should Do More

Turkey has made suggestions for replacing the Kurdish units with other fighters, none of which has drawn a positive response from Washington. Turkey has threatened to attack Kurdish positions in northern Syria if they don't withdraw from certain areas. Washington is keen to keep Turkey on board as part of the coalition, which launches many of its anti-ISIS air strikes from Turkey's Incirlik air base. But it has thus far shown no willingness to abandon the Kurdish fighters, who operate as part of a mixed Kurdish and Arab force known as the SDF, the Syrian Defense Force.

As Thursday's news conference underscored, the failed military coup that rocked Turkey on July 15 continues to be a source of tension between Ankara and Washington.

Turkey is firmly convinced that Gulen, a cleric who has lived for years in Pennsylvania, was behind the uprising that left nearly 300 people dead before it was put down. Ankara has sent boxes of what it calls clear and convincing evidence of Gulen's involvement to Washington, but complains that the Justice Department hasn't acted on its extradition request, either under the Obama or Trump administrations.

The Turkish government's frustration has also fueled significant anti-American sentiment among ordinary Turks, many of whom appear to believe that Gulen is, or was, a CIA asset. Such conspiracy theories often include suspicions that the U.S. either had a hand in or at least had advance knowledge of the coup, which U.S. officials have denied.

Turkey has been under a state of emergency since shortly after the coup attempt, and the government has mounted a massive purge of the military, police, judiciary and civil service — more than 130,000 people suspended, sacked or facing charges. The prime minister recently said he expects the current emergency to be extended for another three months before it expires on April 18. Other officials say no decision on extending the emergency has been taken yet.