Accessibility links
South Carolina Takes Its First Women's NCAA Basketball Title : The Two-Way The lady Gamecocks earned their first national title with a 67-55 win over Mississippi State. It's also a first for former player, Coach Dawn Staley, who had made several Final Fours in her prime. 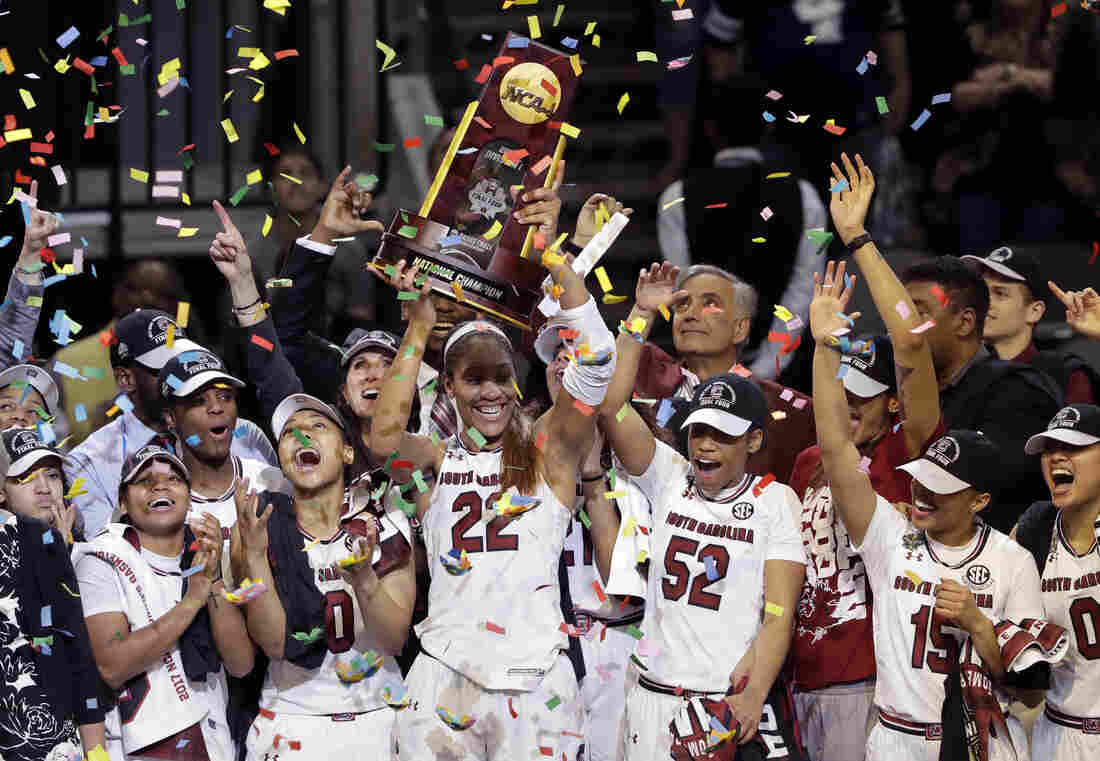 South Carolina forward A'ja Wilson (22) and her teammates celebrate their win over Mississippi State in the final of the NCAA women's college basketball tournament on Sunday. Eric Gay/AP hide caption 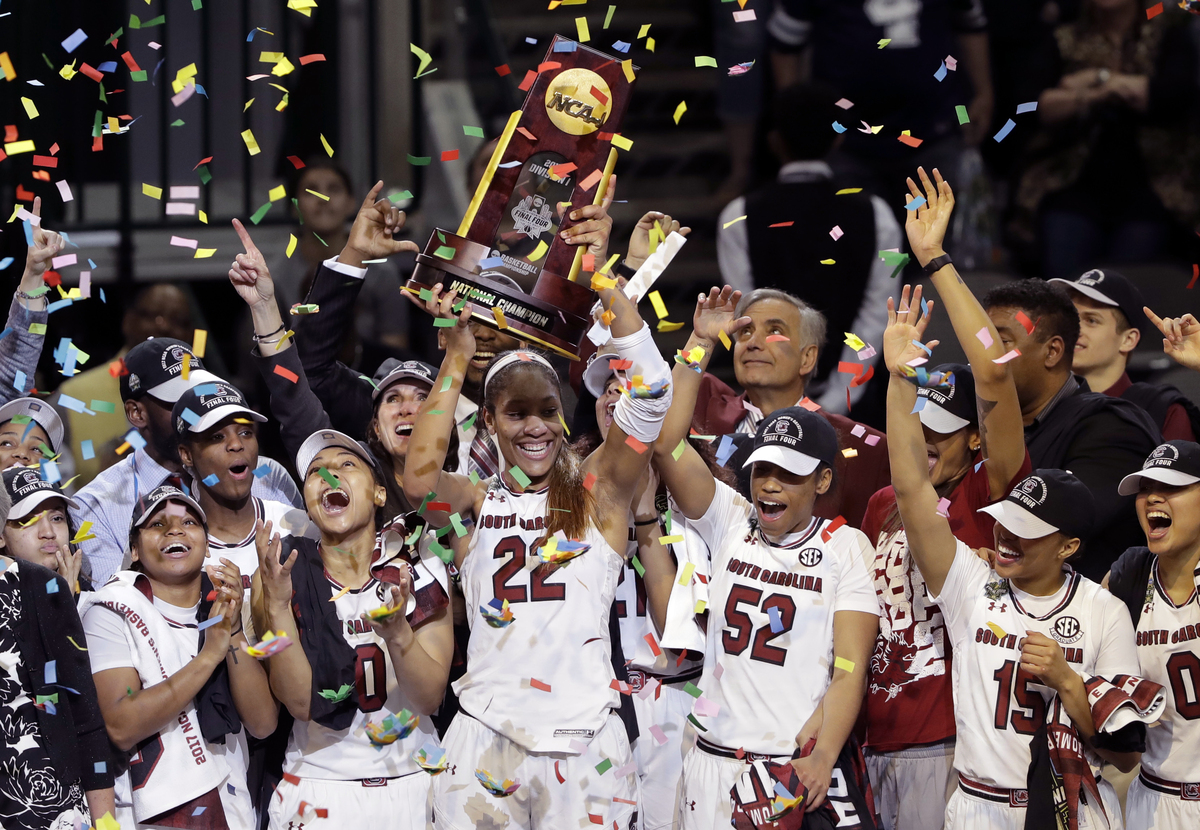 South Carolina forward A'ja Wilson (22) and her teammates celebrate their win over Mississippi State in the final of the NCAA women's college basketball tournament on Sunday.

By now, it's fair to say South Carolina is a better team than Mississippi State. The Gamecocks' 67-55 win in the national title game Sunday was South Carolina's third — and most convincing — win over the Bulldogs this season.

The women's first basketball championship is all the more impressive since the team lost senior center Alaina Coates to an ankle injury before the tournament started.

A'ja Wilson, the tournament's deserving Most Outstanding Player, led the Gamecocks' fourth-quarter surge that put the game away. Six-foot-five-inch Wilson, who scored eight of her game-high 23 points that final quarter, came out in force with rebounds and blocked shots.

But she certainly wasn't the only South Carolina player of note. Shooting guards Allisha Gray and Kaela Davis made their usual contributions: Gray scored 18 points and grabbed 10 rebounds, while Davis scored 10 points.

The Gamecocks, as usual, played excellent defense. Special mention should go to 5-foot-6-inch point guard Bianca Cuevas-Moore. She guarded Mississippi State point guard Morgan William, the Bulldogs star who hit the shot at the buzzer to beat UConn. Cuevas-Moore did a fantastic job of denying William the ball, noticeably taking her out of her game.

The TV broadcasters reported that Mississippi State head coach Vic Shaefer yelled at William in the huddle, asking her if she was going to put in the maximum effort. Schaefer benched William for the entire fourth quarter — a painful moment for a player who came into the game as the tournament darling.

Asked if Vic Schaefer explained why she was out all 4th quarter, Morgan William showed total respect: "He doesn't have to, he's the coach."

The victory also was the first national championship for head coach Dawn Staley, who was a highly decorated player in high school, college and the Olympics. She made it to several Final Fours playing for Virginia, but never won.

Mississippi State plays South Carolina today for the championship of women's Division I college basketball and no, that is not a typo. Four-time defending champion UConn is not playing for a fifth straight title because, of course, Mississippi State upset the Huskies Friday night in a national semifinal game.

What's being called the greatest upset in the history of women's college basketball delivered impressive TV ratings and was, according to ESPN, the most-streamed Women's Final Four game ever, based on total viewers.

Will it be a hard act to follow? Definitely. But for fans who marveled at the way Mississippi State outplayed UConn for most of the game, they can expect more of the same great basketball today.

"To make it this far and not finish it off, that would be tough," Bulldogs point guard Morgan William told the Washington Post yesterday.

"We'd just be the underdogs who got lucky." 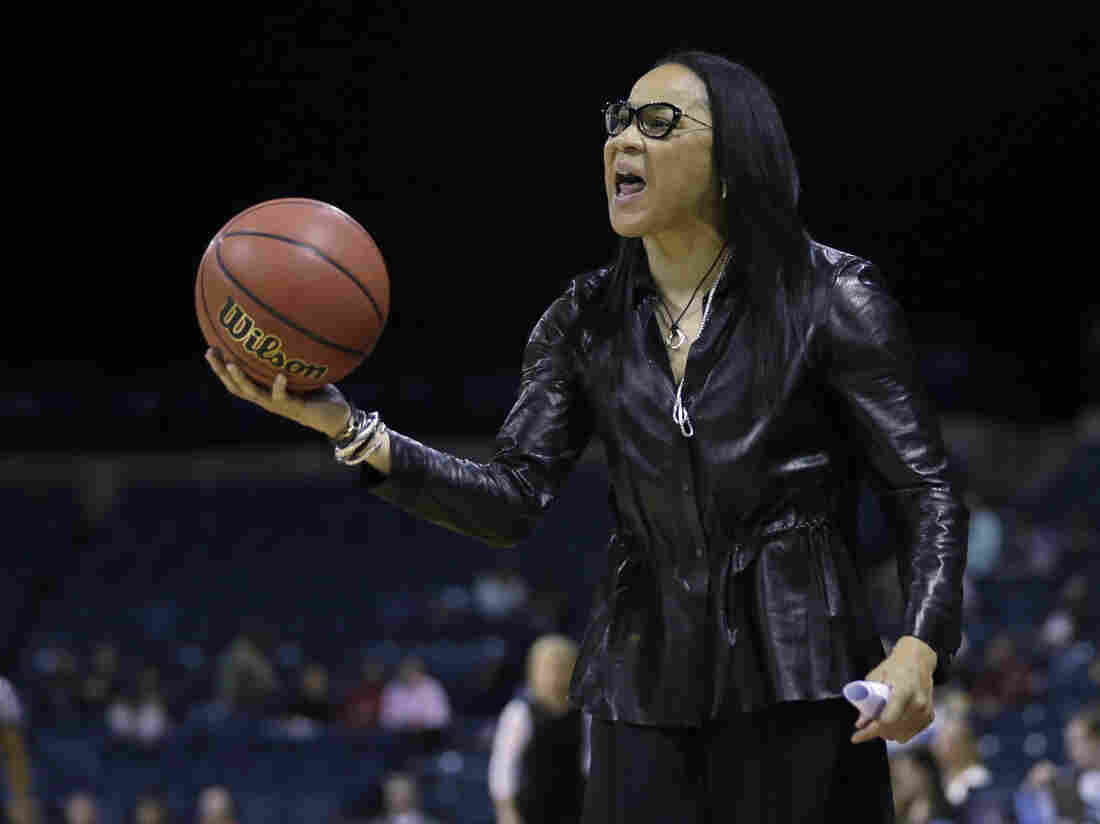 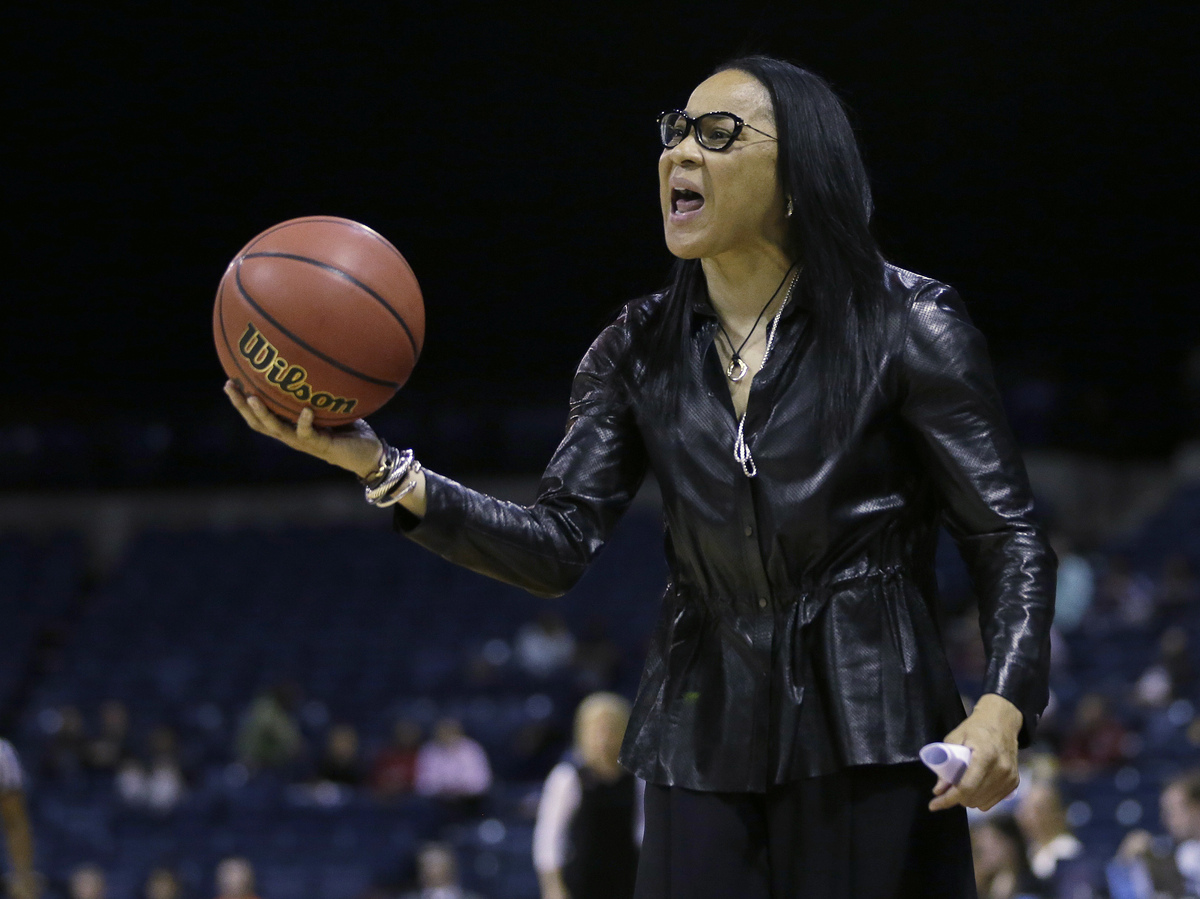 Finishing it off means beating a South Carolina team that won both of its matchups with Mississippi State this season — the most recent, a 10-point win in last month's Southeastern Conference Tournament championship game.

But as the Bulldogs showed Friday, they are a talented, driven group that has every reason to believe the sports adage that it's hard to beat a team three times.

William, of course, is the Bulldog of the moment — the 5–foot-5-inch player nicknamed "Itty Bitty," sank the winning jump shot at the buzzer against UConn. It was her second straight spectacular performance. She scored 41 points in Mississippi State's win over number one seed Baylor in the Elite Eight.

"I feel like with her and with us it's heart over height," Bulldogs forward Breanna Richardson said in the Washington Post. "You can't dictate the play of someone based on how short they are. You have to take them for who they are, and I feel like Morgan is making a statement for that across the world."

"Heart over height" is a nice motto. But in fact, height also is one of the reasons Mississippi State is playing for the championship. Six-foot-7-inch sophomore center Teaira McCowan gave UConn fits inside. Senior post player Chinwe Okorie is 6 feet 5 inches tall.

Junior guard Victoria Vivians is another important part of this team. ESPN.com women's basketball writer Mechelle Voepel says Vivians was the recruit head coach Vic Schaefer pursued the hardest when he took over the program in 2012.

Voepel says Vivians has struggled at times this season with her scoring. Schaefer took her out of the starting lineup at the start of the NCAA tournament, but put her back in before the Regional final against Baylor. Vivians responded and, Voepel says, "She's been a really crucial factor in the wins over Baylor and UConn."

But while Mississippi state has the talent, heart and a sudden national following, the Bulldogs face an extremely tough opponent in South Carolina.

Third time a charm? Maybe not

Yes, it's hard to beat a team three times –- but there are a number of reasons why the Gamecocks could do that with Mississippi State.

South Carolina head coach Dawn Staley is past her playing prime but the former college, pro and Olympic star has her Gamecocks poised to make the most of their first-ever appearance in the championship game.

Morgan William darts like a waterbug on the court, but South Carolina guards have a lot of speed as well, particularly the Gamecock's itty bitty, 5-foot-6-inch point guard Bianca Cuevas-Moore. 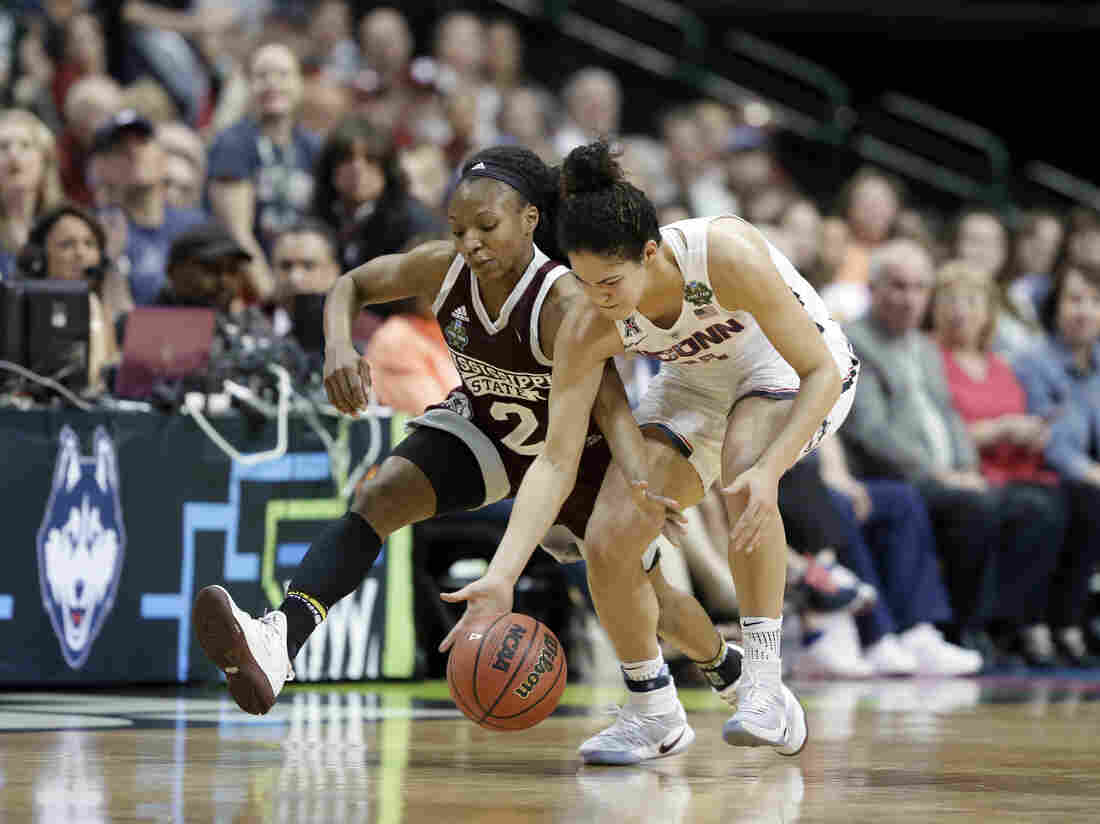 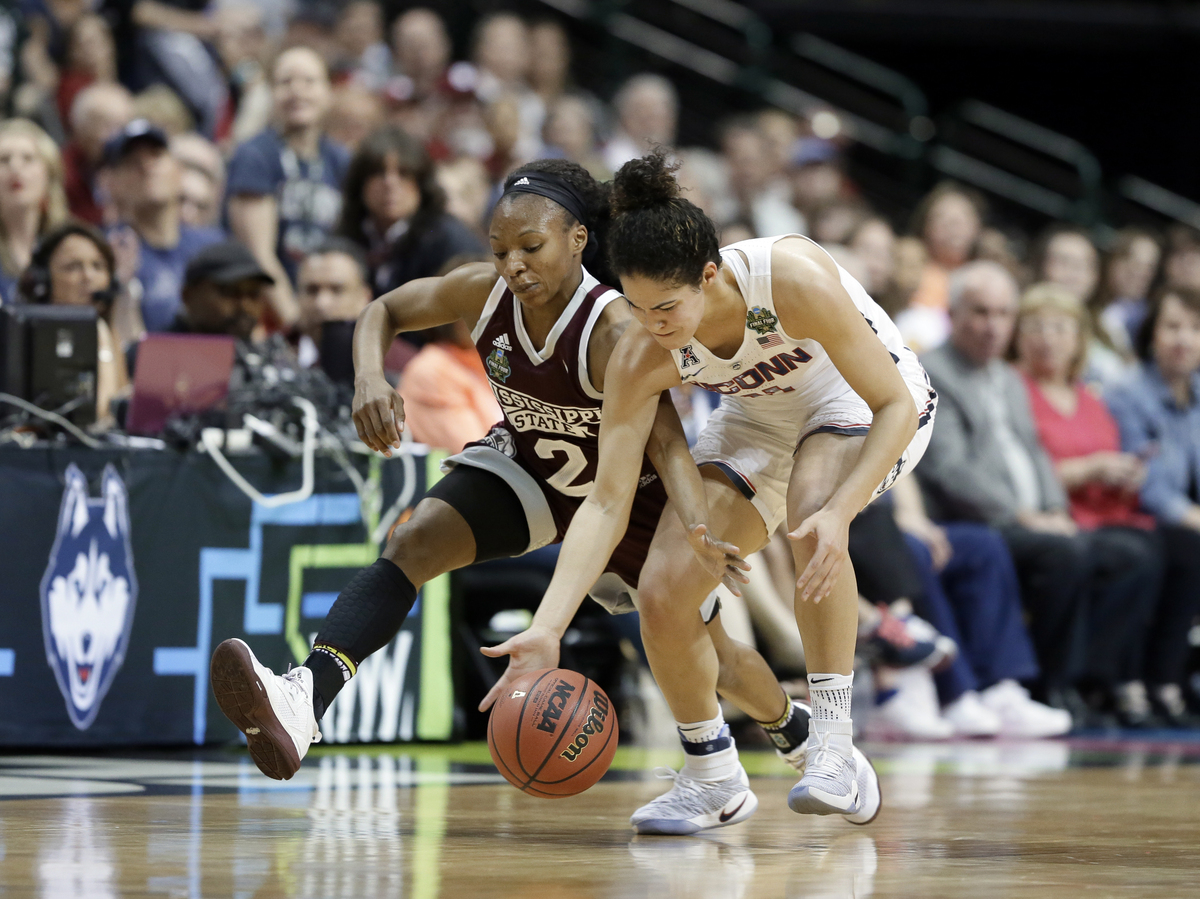 As is often the case with South Carolina, a big factor in Sunday's game is how well A'ja Wilson plays. Wilson is a 6-foot-5-inch first team All American. She doesn't have her counterpart, senior center Alaina Coates, to share duties around the basket. Coates has been out with an ankle injury for the entire tournament and Wilson's had to carry the load inside. How she battles Mississippi State's "bigs" could play a big role in the game's outcome.

Even if the Bulldogs contain Wilson, South Carolina can rely on offense from shooting guards Allisha Gray and Kaela Davis and defense. Always defense with the Gamecocks, who, in the two games against Mississippi State this season, held Bulldogs top scorer Vivians under her season average.

This will be the first time since 2012 that women's Division I college basketball crowns a champion not named UConn. But don't shed a tear for the Huskies – it appears they'll be back in the title picture very soon.

All the key players who went 36-0 this season before losing Friday night, will be back next season. UConn signed the top incoming high school player in the country, high-scoring 6-foot-1-inch guard Megan Walker and the Huskies have two top transfers, both post players, including 6-foot-6-inch Azura Stevens who played two seasons at Duke and whose transfer prompted criticism of UConn head coach Geno Auriemma. Friday, his critics had a measure of satisfaction. But anti-UConn gloaters beware. The Huskies now have the best talent, again, and an edge. Losing makes a team cranky even if the losses are several years apart.

And as ESPN.com's Mechelle Voepel points out, the last time UConn lost in the NCAA tournament was 2012. Notre Dame beat the Huskies in overtime, in a national semifinal game.

UConn went on to win the next four national championships.

Meaning, perhaps, Mississippi State, or South Carolina — enjoy tonight while you can.