Accessibility links
Justice Department To Review All Civil Rights Agreements On Police Conduct : The Two-Way The order by Attorney General Jeff Sessions and the bid to reassess an agreement in Baltimore may signal that the Trump administration plans to scale back investigations and reopen past deals. 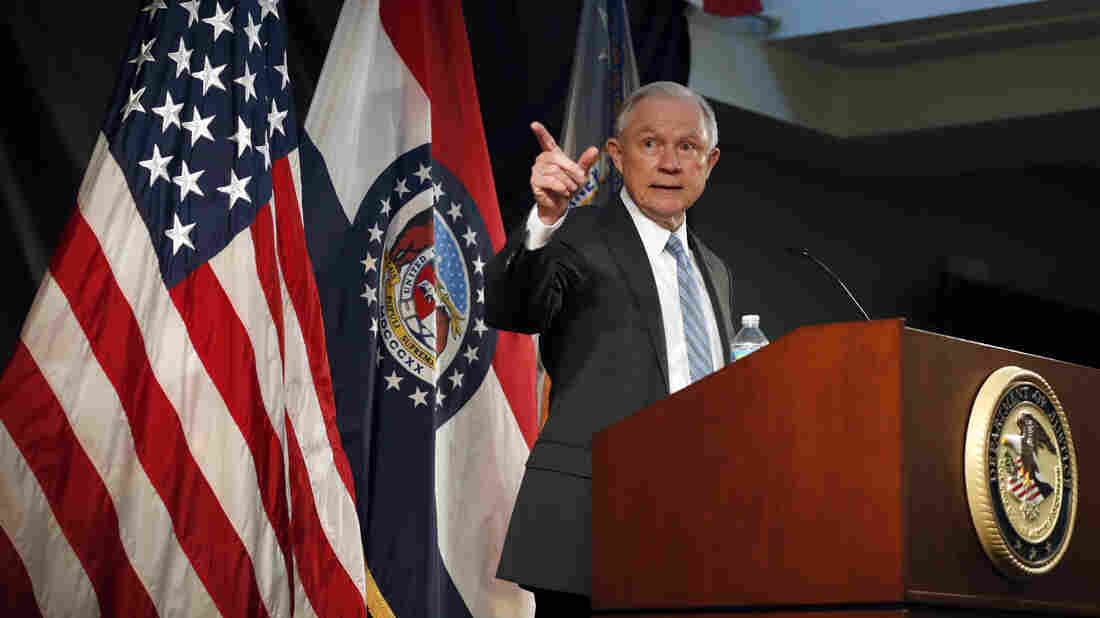 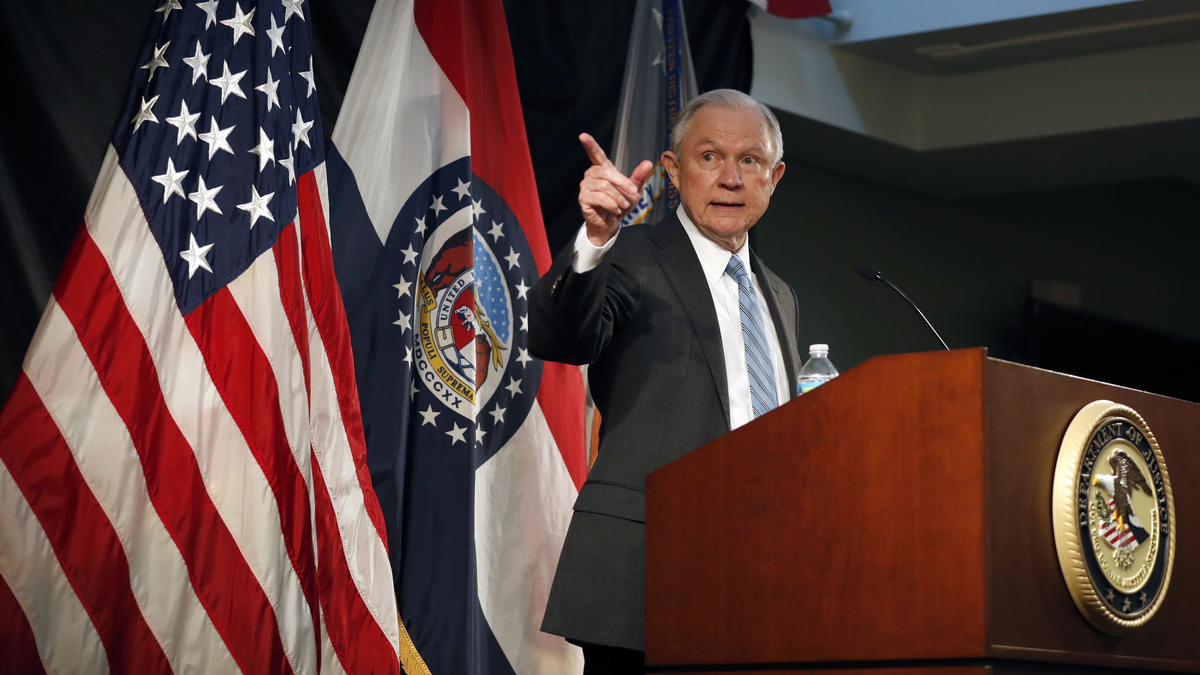 Attorney General Jeff Sessions has ordered a review of all Justice Department agreements with cities about police conduct. He is pictured speaking about crime to local, state and federal law enforcement officials last week in St. Louis.

The leader of the U.S. Justice Department has ordered federal authorities to emphasize building partnerships with local law enforcement over hard-nosed investigations of them, asking a federal judge in Baltimore to delay a hearing this week on a deal to overhaul the city's troubled police force and casting a cloud over a host of other federal consent decrees that target unconstitutional law enforcement practices.

The new directive by Attorney General Jeff Sessions and the bid to reconsider an agreement in Baltimore are the strongest signs yet that the Trump administration not only plans to scale back the number of new investigations it launches into unconstitutional policing, excessive force and other law enforcement misconduct allegations but also the likelihood it will seek to reopen agreements the Obama civil rights unit had already negotiated.

"Local control and local accountability are necessary for effective local policing," Sessions wrote in a memo to department officials and U.S. Attorneys late Monday. "It is not the responsibility of the federal government to manage non-federal law enforcement agencies."

In the two-page memo, Sessions urged federal authorities under his command to do more to promote officer safety and morale. He also directed the deputy attorney general and the associate attorney general to review "all department activities—including collaborative investigations and prosecutions" to ensure they follow his lead. "The misdeeds of individual bad actors should not impugn or undermine the honorable work that law enforcement officers and agencies perform in keeping American communities safe," he added.

But police reform advocates and former Justice Department investigators said the extraordinary change of course by the Trump administration is missing the point. Most of the two dozen police investigations the Obama administration pursued under a law passed after the brutal beating of Rodney King in Los Angeles uncovered patterns of brutality and racial discrimination, problems the DOJ attributed to sweeping, systemic problems in local law enforcement agencies, not a few bad apples on the force.

"The request for a delay is alarming and signals a retreat from the Justice Department's commitment to civil rights and public safety in Baltimore," said Vanita Gupta, who ran the civil rights division under President Obama until January. Gupta added that the Baltimore agreement had been the product of extensive input from the city, residents, the police department and a law enforcement union "in order to address serious constitutional violations that had undermined public trust and public safety in the city."

A spokeswoman for the attorney general said Justice Department lawyers are merely asking the judge in Baltimore for more time to review the agreement, considering the new Sessions memo "and the progress toward reform Baltimore has made in the pasts several months." The spokeswoman, Sarah Isgur Flores, said more time "will help ensure the best result is achieved for the people of the city."

Local officials in Baltimore, including the mayor and the police commissioner, said they saw no reason to delay the court hearing, scheduled for Thursday, and that they hoped to continue working to build trust between law enforcement and community members there.

In Chicago, where Obama Justice officials released scathing findings about police shortly before they left government, but did not reach an agreement on changes to pursue, the fate of any federal consent decree over policing is very much up in the air. Mayor Rahm Emanuel said he could not speak for the U.S. Justice Department, but that he had pledged to advance his own "reforms."

The Sessions memo also raised anew the specter that cities and states whose law enforcement agencies accept federal monies from the Justice Department could see a cut off if they do not adhere to federal laws. The attorney general's new review will cover not only police probes but also federal grant awards, offers of technical assistance and participation in law enforcement task forces. The department has already warned it could slash grant funds to jurisdictions that call themselves "sanctuaries" from federal immigration agents.