Accessibility links
Court Rejects Lawsuit Against Mississippi State Flag's Confederate Symbolism : The Two-Way A black Mississippi resident sued the state, saying the use of the Confederate battle flag amounted to state-sanctioned racial discrimination. The 5th Circuit Court of Appeals has dismissed the suit. 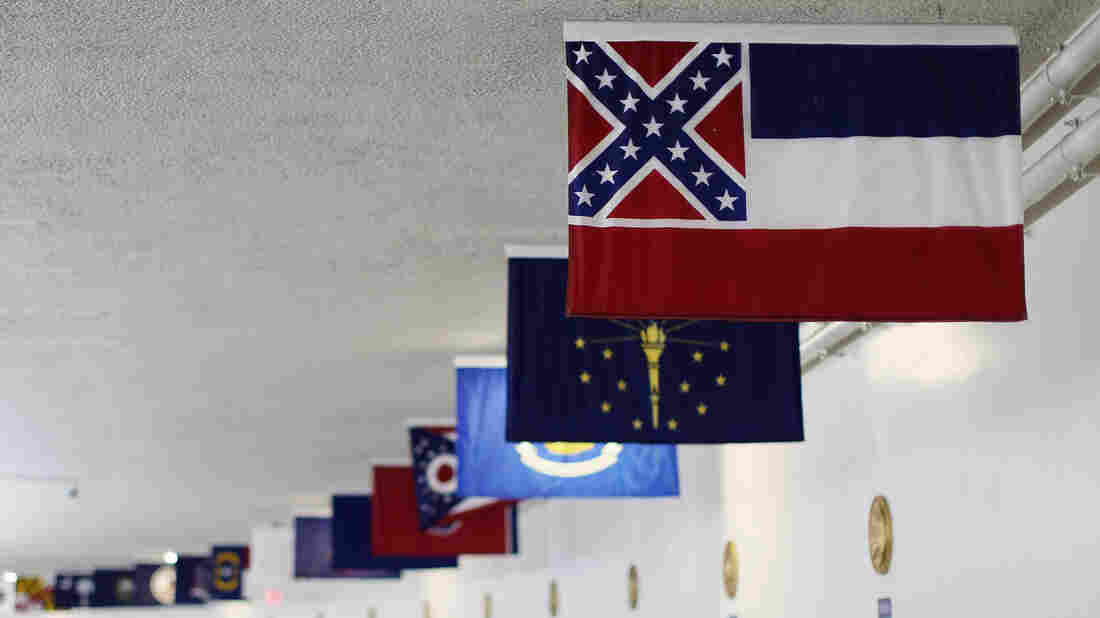 The state flag of Mississippi, which incorporates the Confederate battle flag in the top left corner, is displayed with the flags of the other states and territories in the tunnel connecting the Senate office building and the U.S. Capitol in 2015. Chip Somodevilla/Getty Images hide caption 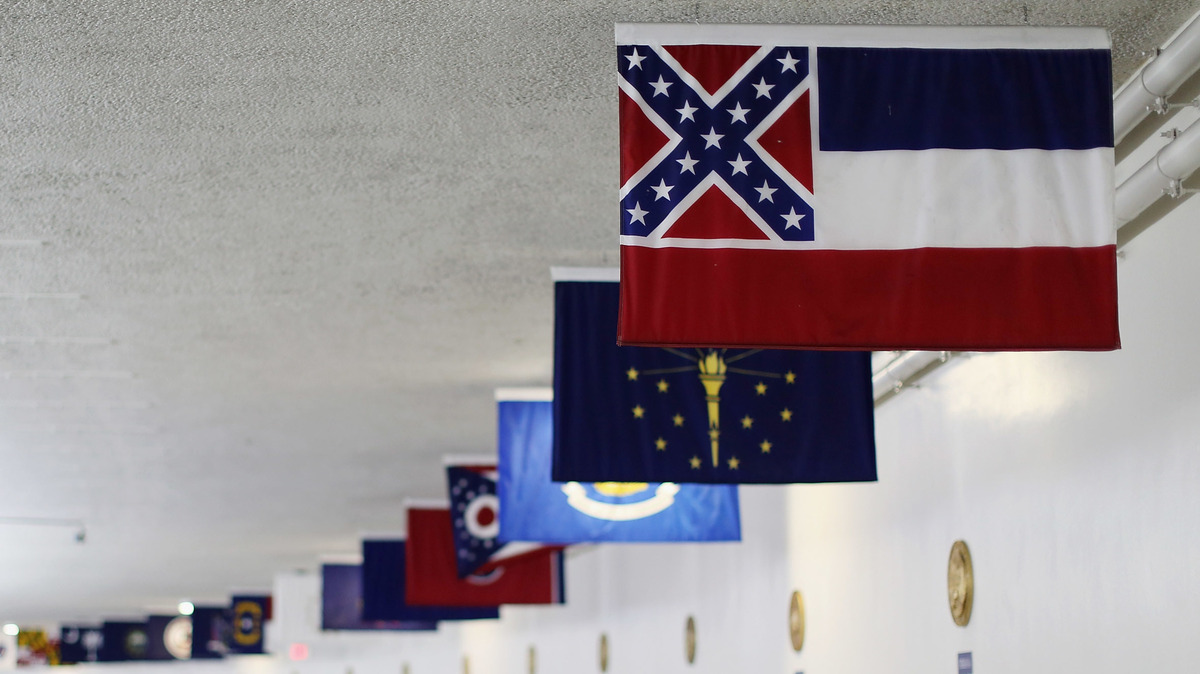 The state flag of Mississippi, which incorporates the Confederate battle flag in the top left corner, is displayed with the flags of the other states and territories in the tunnel connecting the Senate office building and the U.S. Capitol in 2015.

A federal appeals court has rejected a lawsuit against Mississippi over the use of the Confederate battle flag in the state flag.

A black Mississippi resident said that the use of the Confederate symbol amounted to state-sanctioned racial discrimination. But the 5th Circuit Court of Appeals ruled that any emotional harm caused by the flag is irrelevant, legally speaking, and doesn't give him grounds to sue.

Mississippians have been debating their flag for a very long time. In 2001, the state voted to stick with the controversial design. But some official bodies — cities, counties and universities, including the flagship University of Mississippi — refuse to fly the banner.

The lawsuit that was dismissed on Friday was brought by a black lawyer who said he suffered because of the "painful, threatening and offensive" flag, which made him feel like a second-class citizen. He noted that as a lawyer, he saw the flag frequently in court, compounding the pain it caused him. He cited both emotional and physical harms, including high blood pressure and anxiety.

The central question was whether the man had standing to sue — which depended on whether he had experienced an "injury in fact." The appeals court didn't deny that the flag might have a deep and personal effect on the man. They said he demonstrated that he feels stigmatized.

But feeling stigmatized, they said, isn't the kind of injury you can sue the state over.

"[E]xposure to a discriminatory message, without a corresponding denial of equal treatment, is insufficient to plead injury in an equal protection case," the three-judge panel ruled.

The case had already been rejected by one federal judge, as NPR's Debbie Elliott reported last month.

"U.S. District Judge Carlton Reeves threw out the case last year," Debbie reported. "But it's interesting to note the words that Judge Reeves used. He's also African-American ... And he wrote that there's no constitutional right to be free from anxiety at what he describes as a state display of historical racism. He called the Confederate emblem a repulsive symbol of the past, 'born of the South's intention to maintain slavery.' "

The 5th Circuit was less critical of the flag, although it did suggest that the stigmatizing effect of the flag might possibly be "strongly, sincerely and severely felt," without legal redress being possible.

The 5th Circuit also rejected a claim on behalf of the Mississippi man's daughter, who, under Mississippi law, will be taught "the proper respect" for the state flag in school and learn the state pledge of allegiance to the flag.

The man said that being forced to respect or pledge allegiance to a flag with Confederate imagery would violate his daughter's First Amendment rights.

The Circuit Court responded with an argument that, in a roundabout way, suggests the Mississippi flag might not be worth respecting. That is, they said "proper respect" for the flag is the "correct" or "suitable" respect, not a particular amount of respect.

So, they concluded, "all that is required to be taught is the history of the flag and the respect that it is due, whatever that may be."

And that, they said, does not violate the Constitution.