Accessibility links
Joe Arpaio's Infamous Tent City Jail In Maricopa County Will Shut Down : The Two-Way The former Maricopa County sheriff routinely pointed to the notorious outdoor facility as a symbol of his "tough on crime" stance. The new sheriff says it is costly and not a deterrent. 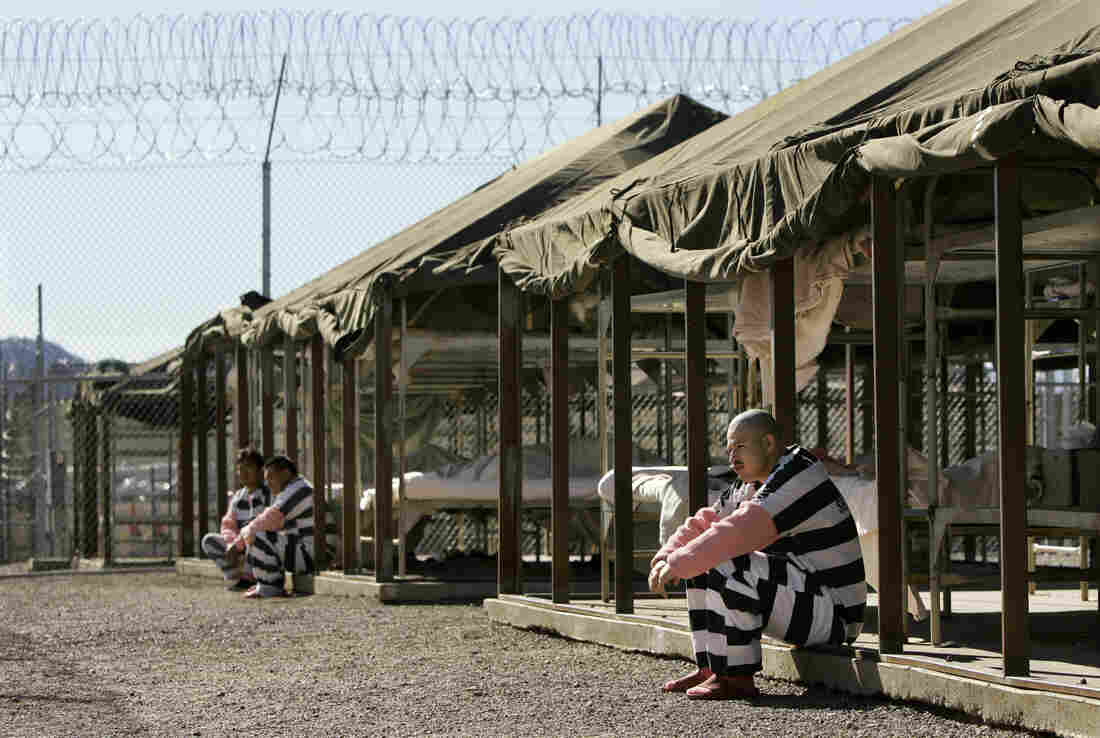 Inmates sit next to their bunks in the courtyard of the Tent City Jail in Arizona's Maricopa County. Charlie Riedel/AP hide caption 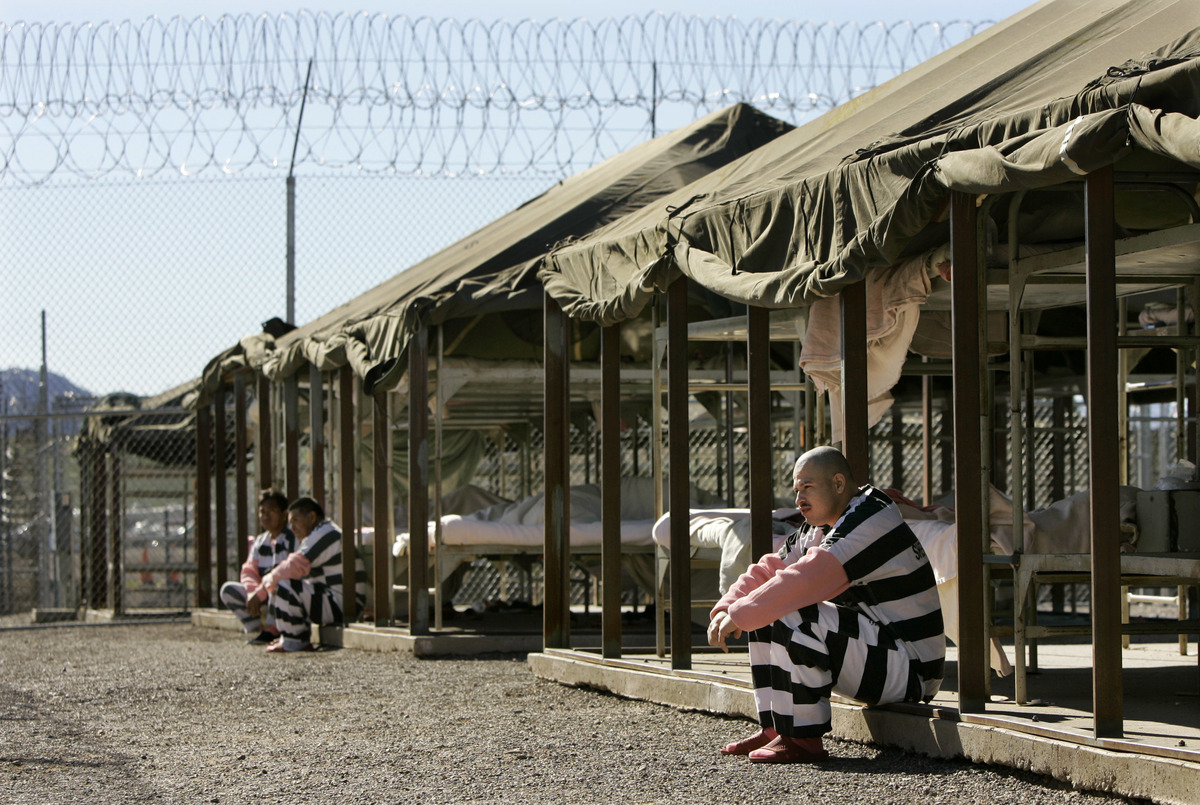 Inmates sit next to their bunks in the courtyard of the Tent City Jail in Arizona's Maricopa County.

Former Maricopa County Sheriff Joe Arpaio routinely pointed to the notorious, outdoor Tent City Jail he opened in the 1990s as a symbol of his "tough on crime" stance. Inmates live in tents through the sweltering Arizona summer heat and are issued old-fashioned striped prison jumpsuits and pink underwear.

Now, it's shutting down.

"This facility is not a crime deterrent, it is not cost efficient, and it is not tough on criminals," newly-elected Sheriff Paul Penzone told reporters at a news conference Tuesday.

"This facility became more of a circus atmosphere for the general public." Penzone said. "Starting today, that circus ends and these tents come down."

Penzone projected that at least half of the tent population will be moved indoors within 45-60 days. He said it may take several months to address those inmates who spend only part of their time at the Tent City Jail, such as those on work furlough.

Closing the facility and sending the inmates to other detention centers will save about $4.5 million, Penzone added. It will also allow personnel to be deployed to other locations that are understaffed.

The facility opened in 1993, the year Arpaio was elected sheriff, ostensibly to handle a surging jail population. It was widely criticized by rights groups as humiliating and inhumane.

Arpaio frequently took reporters on tours of the facility, which boosted his public image as the self-styled "toughest sheriff in America."

During his campaign to oust Arpaio, Penzone criticized his celebrity status: "It shouldn't be that I go to another place in the country or outside the country and they know who our sheriff is. ... And it's for all the wrong reasons, and that's what is even more disturbing."

During the news conference, Penzone said a methodical review found that counter to Arpaio's claims, there's no evidence that Tent City Jail and its tough reputation made people less likely to commit crimes. 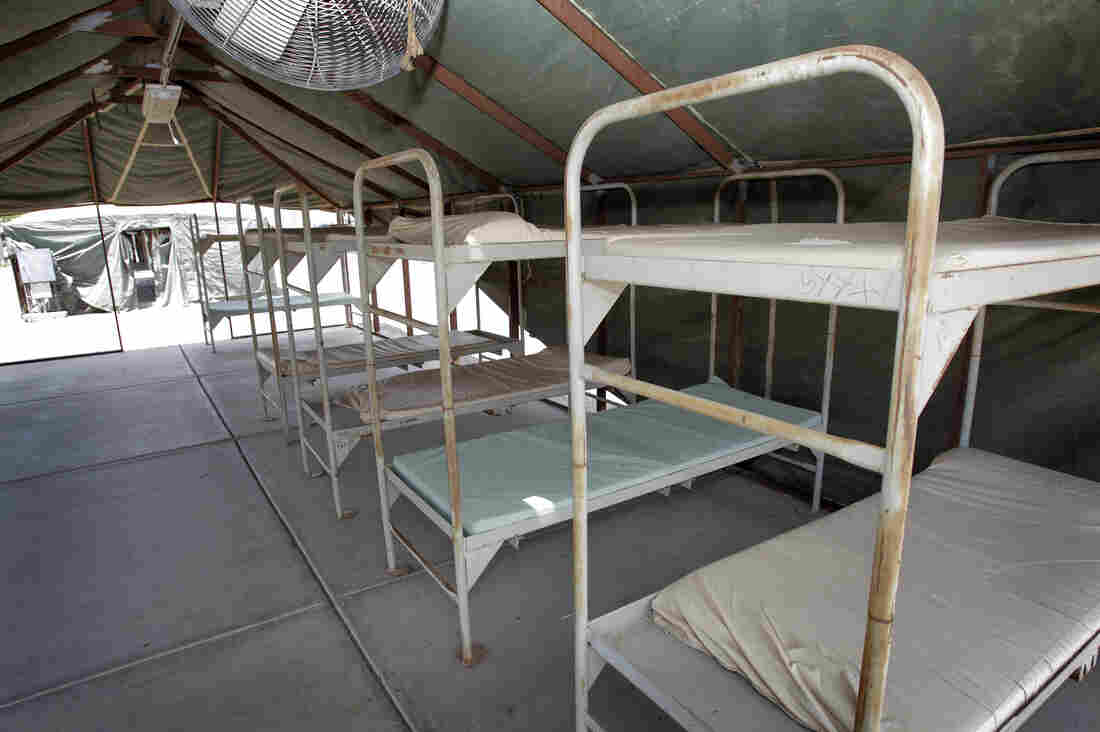 In fact, he said, it had become a "preferred location and a choice" for the inmates. "That undermines and goes against all the things that we've been told for far too long," Penzone said.

"What does that tell you? It tells you that this negative image that we've gotten since 1993, that we are so tough on prisoners in Maricopa County that this is how we treat them — that this is false," Grant Woods, who led the review, said at the news conference.

"The good news is that we weren't guilty of that — they have an environment there that they choose to be in, and think it's OK and prefer it to the alternative of being cooped up 23 hours a day," Woods added. "The bad news is that the rest of the country thinks we're that sort of person that would abuse and humiliate prisoners and put them in such harsh situations."

The Tent City Jail's population peaked at 1,700 inmates but now stands at 700-800, Woods said. At the same time, staffing continued at the same levels, meaning the cost per inmate approximately doubled.

After Tuesday's announcement, Arpaio insisted in an Associated Press interview that "inmates found the complex to be a harsh place." He added that he wasn't upset, saying that he "didn't do it for the legacy."

Alessandra Soler, executive director of the American Civil Liberties Union of Arizona, said it is a "good step forward" but that "there's still work to do."

She added: "Maricopa County should use its savings from closing Tent City to improve care for mentally ill detainees, as well as invest in programs and services that treat the root causes of crime, like drug and mental health diversion programs, increased access to mental health care, and job training and education."