Accessibility links
Congressional Leaders Urge Trump Administration For Broader Syria Strategy : The Two-Way Lawmakers voiced cautious support for the decision to launch strikes in Syria, but leading voices in both parties want the administration to collaborate with Congress on where the strategy goes now. 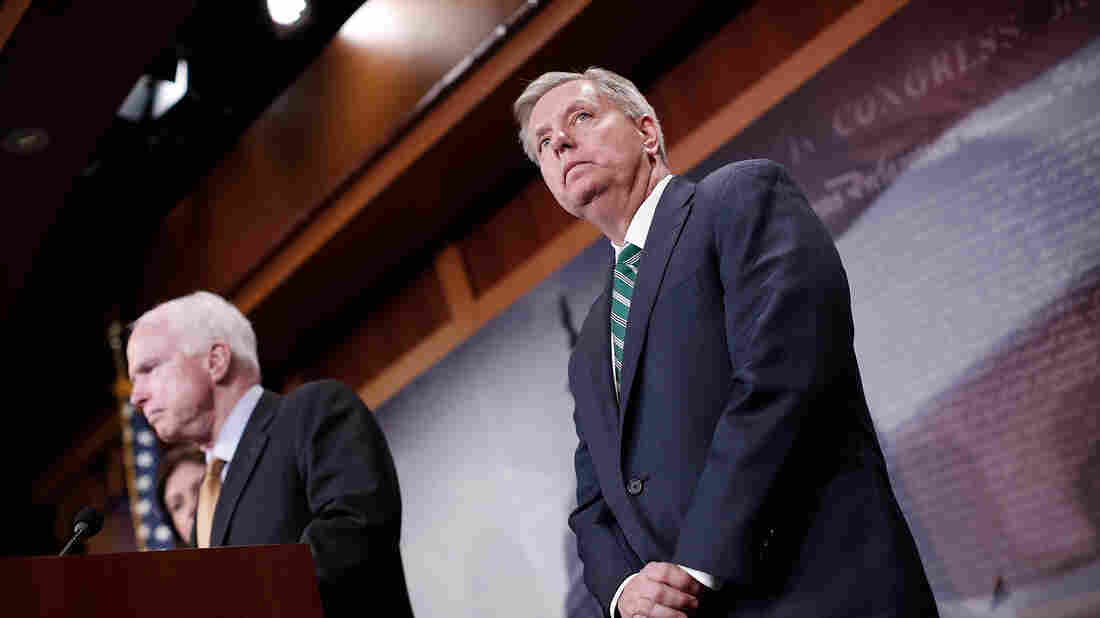 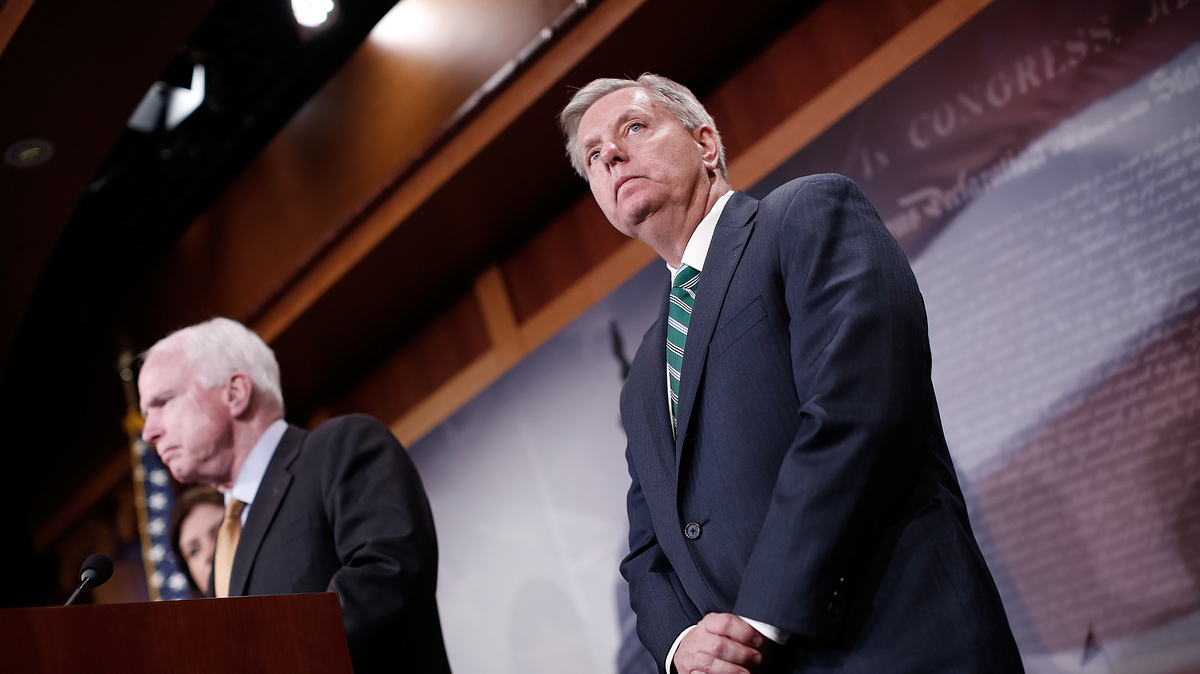 Sens. John McCain and Lindsey Graham in 2015. "President Trump confronted a pivotal moment in Syria and took action," they said in a statement.

"I think it was appropriate but I would like to say, despite all the enthusiasm we see this morning, if I might quote [Winston] Churchill, 'It's the end of the beginning, not the beginning of the end,' " Senate Armed Services Chairman John McCain, R-Ariz., told MSNBC on Friday morning.

He added: "We have a Middle East in chaos, the Europeans being destabilized, the spread of [the Islamic State] throughout the world. This is the challenge of Bashar al-Assad, and then we have also got the challenge of ISIS, so there's a lot more to go."

Speaking on the Senate floor, Majority Leader Mitch McConnell, R.-Ky., urged the administration to collaborate, and elaborate, on where the strategy goes from here. "In the days ahead, I am committed to working with the administration to continue developing a counter-ISIL strategy that hastens the defeat of ISIL and establishes objectives for dealing with the Assad regime in a manner that preserves the institutions of government in an effort to prevent a failed state," he said.

"Making sure Assad knows that when he commits such despicable atrocities he will pay a price is the right thing to do," Senate Minority Leader Chuck Schumer, D-N.Y., said late Thursday. "It is incumbent on the Trump administration to come up with a strategy and consult with Congress before implementing it."

Senators were scheduled to hold a classified briefing with military and intelligence officials Friday afternoon. The Senate adjourns Friday afternoon for the two-week Spring recess; the House has already left town for the break.

Some Democrats, and at least two Republicans, are questioning the strikes' constitutionality. The military action also is reviving debate over Congress' role in the matter and whether the president needs to obtain congressional authorization for any prolonged military engagement in the region.

The President needs Congressional authorization for military action as required by the Constitution.

That notion is supported by Rep. Barbara Lee, D-Calif. — a prominent liberal supporter of Congress passing a new authorization for the use of military force (AUMF). On Twitter, Lee characterized the airstrikes as "an act of war."

Airstrikes are an act of war. Atrocities in Syria cannot justify departure from Constitution, which vests in Congress power to commence war.

Lee tweeted: "I was the lone vote against 2001 AUMF. Syria strikes are far beyond the scope of this war authorization. Speaker Ryan needs to bring a vote."

I was the lone vote against 2001 AUMF. Syria strikes are far beyond the scope of this war authorization. @SpeakerRyan needs to bring a vote.

President Trump — like President Barack Obama before him — has launched airstrikes against ISIS targets using as legal justification the 2001 war authorization Congress passed after the attacks of Sept. 11, 2001. But lawmakers are split over whether that justification covers attacks against the Assad government.

House Speaker Paul Ryan, R-Wis., said the strike was "appropriate and just" and signaled that he also wants the Trump administration to consult Capitol Hill lawmakers on the matter. "I look forward to the administration further engaging Congress in this effort," he said.

A previous version of this story incorrectly referred to Rep. Justin Amash, R-Mich., as a U.S. senator.