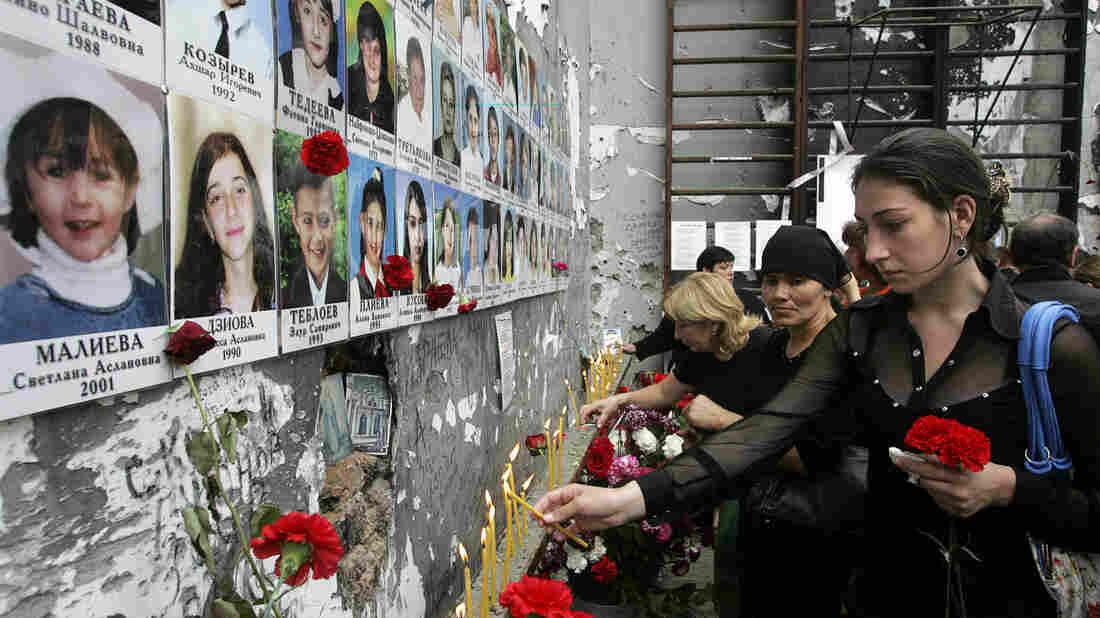 A lack of official coordination and the use of powerful weapons contributed to the casualties during a terrorist takeover of a school in Beslan, Russia, in 2004, a European court says. Here, people lay flowers and light candles at the school gym in 2009, marking the fifth anniversary of the attack. Kazbek Basayev/AFP/Getty Images hide caption 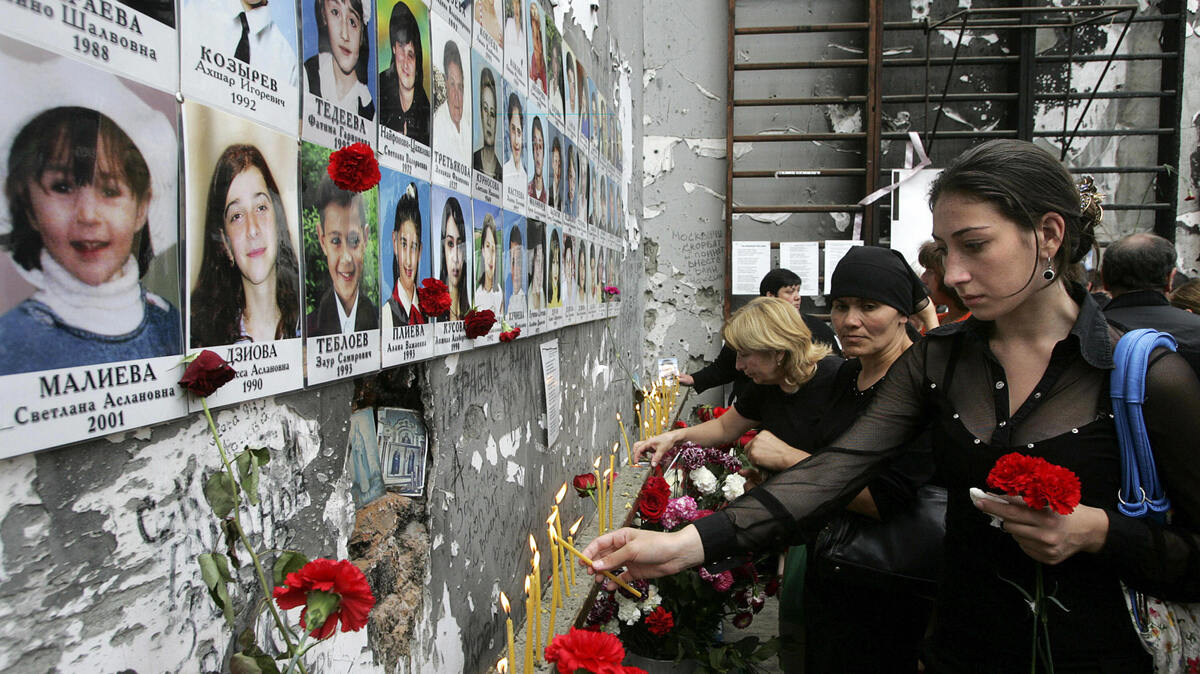 A lack of official coordination and the use of powerful weapons contributed to the casualties during a terrorist takeover of a school in Beslan, Russia, in 2004, a European court says. Here, people lay flowers and light candles at the school gym in 2009, marking the fifth anniversary of the attack.

Russia failed to prevent a 2004 attack on a school in the town of Beslan and then overreacted by using grenades, tanks and flamethrowers to end a three-day siege that killed more than 330 people, the European Court of Human Rights says, ruling in a case brought by victims of the attack and their families.

The court is ordering Russia to pay the plaintiffs nearly 3 million euros ($3.2 million). Russia's Justice Ministry says it will appeal the ruling. Under the European court's protocols, any party to the case has three months to appeal to the Grand Chamber of the Court.

On Sept. 1, 2004, Beslan School No. 1 in the Russian republic of North Ossetia was taken over by dozens of militants who were demanding freedom for nearby Chechnya. They held more than 1,100 people hostage, more than half of them children. The separatists corralled the hostages into the gymnasium, stringing bombs along the floor and ceiling. Soldiers arrive outside the school. (See NPR's timeline).

On Sept. 3, two strong explosions hit the gym, and a gunfight ensued as desperate hostages tried to escape. The roof caught fire and collapsed.

More than 180 children died in the incident, and more than 750 people were hurt. The European court ruled in a case brought by 409 Russian nationals who accused the Russian government of a string of failures in its response to the attack.

"The Court could not avoid the conclusion that this lack of responsibility and coordination had contributed, to some extent, to the tragic outcome of the events," the judges say, discussing a lack of formal leadership among officials and agencies in forming a rescue plan.

"In the absence of proper legal rules, powerful weapons such as tank cannon, grenade launchers and flame-throwers had been used on the school," the European court says, adding, "This had contributed to the casualties among the hostages" in violation of laws concerning the use of lethal force.

In 2002, a similar attack on a theater in Moscow resulted in the deaths of more than 120 people, after Russian forces pumped poisonous gas into the building.

Here's a breakdown of problems the court found in the Beslan case:

Before the attack: "The authorities had been in possession of sufficiently specific information of a planned terrorist attack in the area, linked to an educational institution. Nevertheless, not enough had been done to disrupt the terrorists meeting and preparing; insufficient steps had been taken to prevent them travelling on the day of the attack; security at the school had not been increased; and neither the school nor the public had been warned of the threat."

During the attack: Russian authorities failed to plan and conduct a rescue operation in a way that would minimize the risk to life, the court says, adding: "There were delays in setting it up and inconsistencies in determining its leadership and composition, and the lack of any records highlights the appearance of a void of formal responsibility."

That failure also extended to a lack of coordination among medical, rescue and firefighting teams.

After the attack: Investigators "failed to conduct full forensic examinations of the majority of the victims (in order, for example, to identify and match external objects like bullets or shrapnel); and had failed to properly record the location of the vast majority of the hostages' bodies. For one third of the victims, the exact cause of death had not been established."

Investigators also "failed to properly secure and record other evidence before the site was irreparably altered by large machinery and the lifting of the security cordon on the day after the end of the rescue operation."

The official inquiry didn't adequately examine the use of deadly force — and did not determine what weapons had been used, where and by whom — despite evidence that security forces had used weapons "capable of causing indiscriminate harm to the people inside the building, such as grenade launchers, flame-throwers and tank cannon."

Officials also repeatedly refused to release expert reports on the use of lethal force and the cause of the initial explosions that struck the school's gym, the court says.