Accessibility links
U.S. Drops 'Mother Of All Bombs' In Afghanistan : The Two-Way The so-called Mother of All Bombs was dropped Thursday in Afghanistan. The Pentagon says it hit an underground ISIS complex. 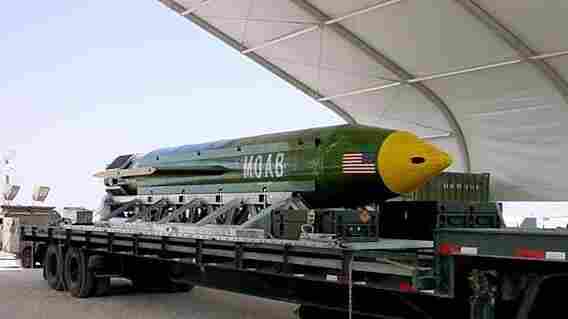 A photo provided by Eglin Air Force Base shows the GBU-43/B Massive Ordnance Air Blast bomb. The Pentagon says U.S. forces in Afghanistan dropped the military's most powerful non-nuclear bomb on an Islamic State target on Thursday, the first-ever combat use of the weapon. Eglin Air Force Base/AP hide caption 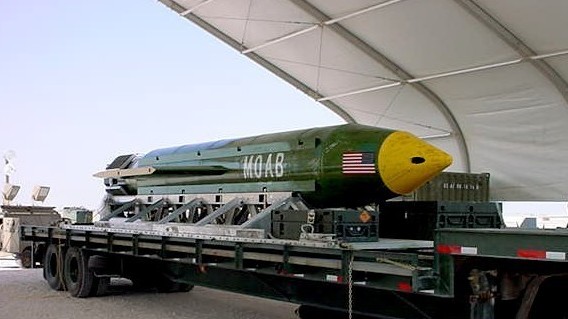 A photo provided by Eglin Air Force Base shows the GBU-43/B Massive Ordnance Air Blast bomb. The Pentagon says U.S. forces in Afghanistan dropped the military's most powerful non-nuclear bomb on an Islamic State target on Thursday, the first-ever combat use of the weapon.

The U.S. has dropped the most powerful conventional weapon ever used in combat to hit an underground ISIS complex in Afghanistan, Pentagon officials say.

The nearly 22,000-pound "MOAB" — standing for Massive Ordnance Air Blast, or as it's also known, the "Mother of All Bombs" — was designed during the Iraq War but had never before been used on the battlefield.

The U.S. has used the bomb's predecessor, a smaller but still massive weapon known as the "Daisy Cutter," in Afghanistan before.

The Pentagon says it dropped the MOAB in Nangarhar province at around 7:30 p.m. local time, to counter ISIS efforts to use bunkers and tunnels as defense mechanisms.

"This is the right munition to reduce these obstacles and maintain the momentum of our offensive against ISIS-K," or the Islamic State in Afghanistan and Pakistan, Gen. John Nicholson, the commander of U.S. forces in Afghanistan, said in a statement.

The Pentagon says the U.S. "took every precaution to avoid civilian casualties" in the strike.

At a news conference Thursday, White House press secretary Sean Spicer said the bomb used was "a large, powerful and accurately delivered weapon." He declined to comment on whether the U.S. would use the weapon again, in Afghanistan or elsewhere.

Speaking later Thursday, President Trump was asked if he had authorized the bombing. He said he's given the military "total authorization," apparently referencing actions against ISIS in general, and praised the "incredible leaders" of the military.

He said he didn't know if the use of the weapon sent a message to North Korea, and that it "didn't make any difference" if it did or not.

"The GBU-43/B has been in the U.S. arsenal for more than 14 years, deployed to bases in the Middle East where it could be loaded aboard an American aircraft but never used until now. At more than 30 feet long, it's too big to fit inside the weapons bay of a standard Air Force bomber. Instead, troops load it into the cargo compartment of a specialized transport, the MC-130 Combat Talon, which releases it over the target by opening its ramp in the same way it might for paratroopers or air-dropped supplies. The bomb is guided by satellite to its target.

"The MOAB is a replacement for the earlier, smaller, unguided BLU-82 'Daisy Cutter,' which was about 15,000 pounds. The Air Force used Daisy Cutters early in the war in Afghanistan to destroy al Qaeda and Taliban cave complexes, like the ISIS base the Pentagon described destroying in Nangarhar Province on Thursday."

When deployed in combat, the smaller Daisy Cutter could be felt from miles away.