Accessibility links
More Than 100, Including 68 Children, Killed In Suicide Attack On Syrian Evacuees : The Two-Way The Syrian Observatory for Human Rights says most of the victims were families evacuating from two Shiite villages, Fuaa and Kefraya, long besieged by rebels. No group has claimed responsibility. 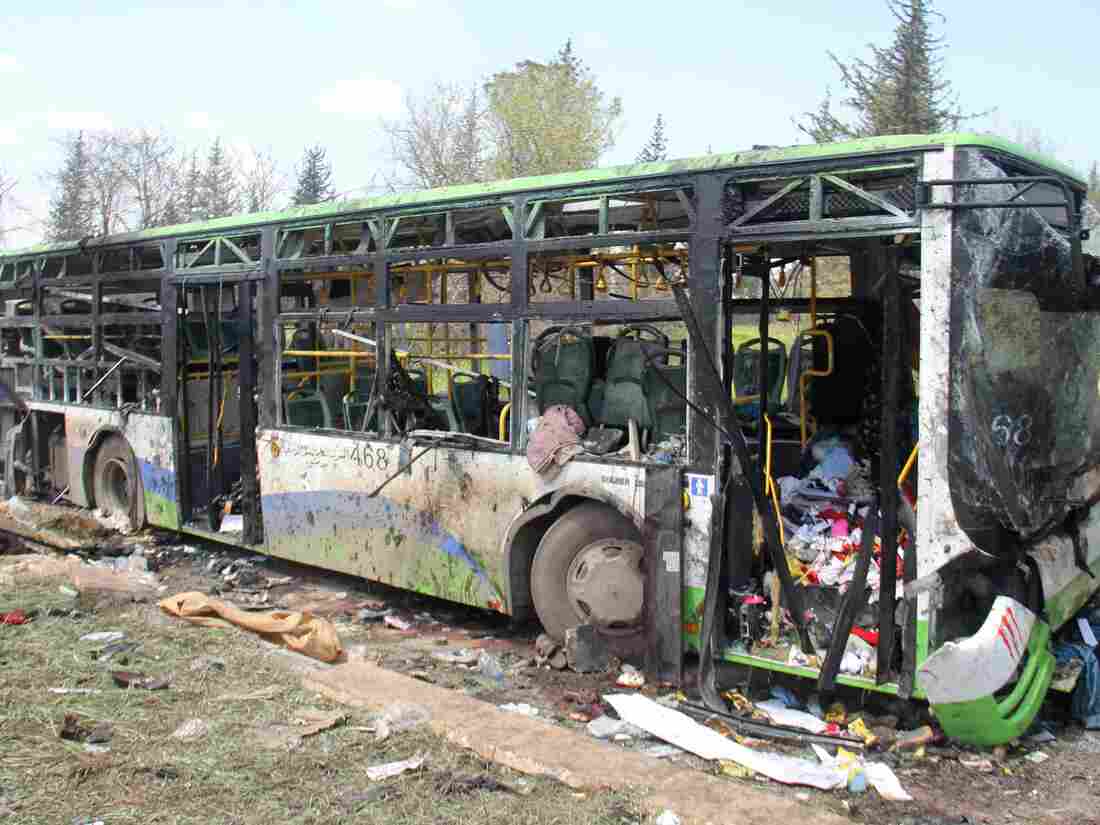 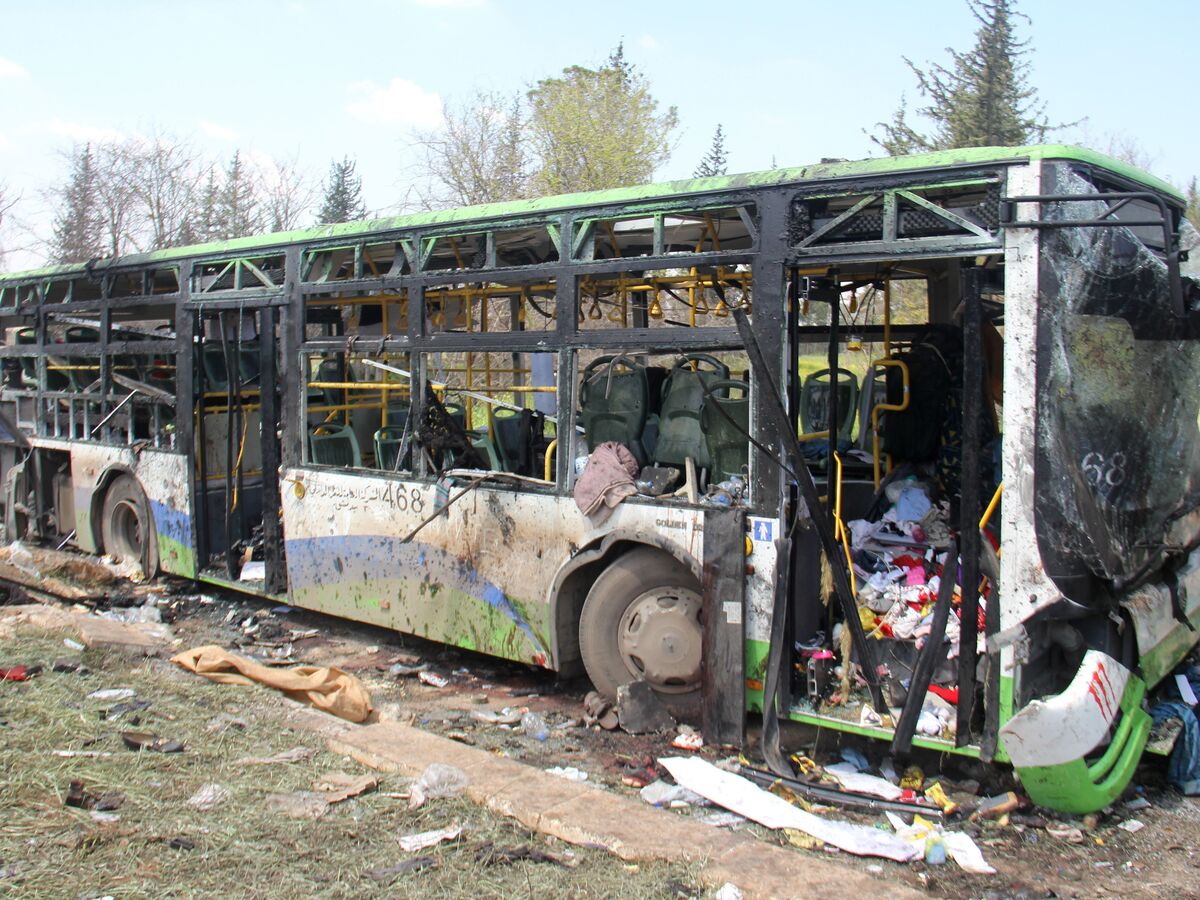 More than 100 people, including 68 children, were killed in a suicide attack on Saturday in rebel-held northwestern Syria. The Syrian Observatory for Human Rights says the vast majority of the victims were families evacuating from two Shiite villages, Fuaa and Kefraya, long besieged by rebels. They had been promised safe passage out of rebel-held territory, as part of a reciprocal deal to evacuate two besieged pro-rebel towns, Madaya and Zabadani, on the opposite end of the country.

The population exchange stalled on Saturday, amid disagreements over the terms of the evacuation. The line of buses from Fuaa and Kefraya parked on the outskirts of Aleppo city, still trapped in rebel-held territory.

There was a car distributing potato chips to the children. ... The children started to chase after the car, and then it exploded.

The situation appeared under control, even serene, in the run-up to the attack. Videos uploaded to YouTube by opposition media outlets show Fuaa and Kefraya families passing the time alongside the line of parked buses. Many children had gotten out of the buses to play in the sun, staying within eyesight of their mothers. Others stayed inside the buses, whether for comfort or fear for their safety, and those children shouted to their friends outside.

Old men paced back and forth on the curb. Syrian Arab Red Crescent workers surveyed the scene in their bright red jackets. Farther back, rebels on walkie-talkies waited for the final OK to allow the convoy to proceed into government-held Aleppo.

From serenity to pandemonium

Suddenly, the scene changed from serenity to pandemonium. Women were heard screaming and smoke was seen rising in videos filmed in the immediate aftermath of the attack.

As cameramen get closer, body after charred body is seen strewn on the grassy embankment and the road. Others died in the buses. The body of a child hangs limp from a bus window.

"There was a car distributing potato chips to the children," a man in an ambulance, purportedly a witness, told the opposition-leaning media outlet Zaman al-Wasl. "The children started to chase after the car, and then it exploded."

A powerful al-Qaida-linked rebel alliance holds sway over the region of northern Syria where the attack took place and was the key guarantor for the convoy's safe passage. A separate hard-line rebel group, Ahrar al-Sham, condemned the "cowardly" attack and said it was investigating who was behind it. It said that many of its own men were also killed in the attack.

No group has claimed responsibility.

It was not the first time efforts to relieve pressure on the Shiite villages came under attack. A deal to evacuate Fuaa and Kefraya residents in conjunction with the evacuation of rebels and families from eastern Aleppo was nearly sabotaged late last year. The buses were torched in a rebel-held town en route and at least one driver left dead.

Prominent opposition figures have long rejected a total evacuation of the Shiite villages, one of the last pressure points to be used as leverage in dealings with the government and its powerful Shiite ally Iran. One hard-line cleric with more than 3 million Twitter followers recently posted that anyone who allowed the Shiites to leave was either a fool or a sellout.

Dozens of wounded still unaccounted for

Saturday's evacuations were eventually able to proceed. Videos posted by pro-government media showed the convoy of buses passing into government-held Aleppo by night. Dozens of wounded are still unaccounted for, possibly scattered in opposition hospitals.

Despite fears of reprisals against evacuees from two rebel-held towns, their buses were able to proceed safely to northern rebel-held territory — their security guaranteed by the Shiite militant group Hezbollah.

It was only one stage of the evacuation, which foresees the emptying of the isolated Shiite community in the north and the two pro-rebel towns in the Damascus countryside.

Residents of the pro-rebel-held towns theoretically have the option to remain, but opposition activists say the majority of families will leave to avoid the Syrian military army for their sons or over fears of detention. Opposition activists have decried the deal as forced demographic change on sectarian lines. But others, with relatives in the besieged towns, say they are tired of hunger and long days hunkered down in basements.

Syrians from the Shiite villages had long expressed hope the army and its allies would advance and break the siege. The evacuation deal, however painful, was meant to offer them safety.

A Facebook page dedicated to Fuaa and Kefraya now displays the silhouette of a child hanging upside down, evoking the image of the child hanging from the bus window. It asks, "For what sin did they die?"

In a previous version of this story, we incorrectly said the security for the convoy was provided by the group Ahrar al-Sham. In fact, an al-Qaida-linked rebel alliance was the security guarantor.