Accessibility links
Pence Tells North Korea: 'The Era Of Strategic Patience Is Over' : The Two-Way "All options are on the table," U.S. Vice President Pence said during his visit to South Korea, amid rising tensions with North Korea over its nuclear and ballistic missile program.

Pence Tells North Korea: 'The Era Of Strategic Patience Is Over'

Pence Tells North Korea: 'The Era Of Strategic Patience Is Over' 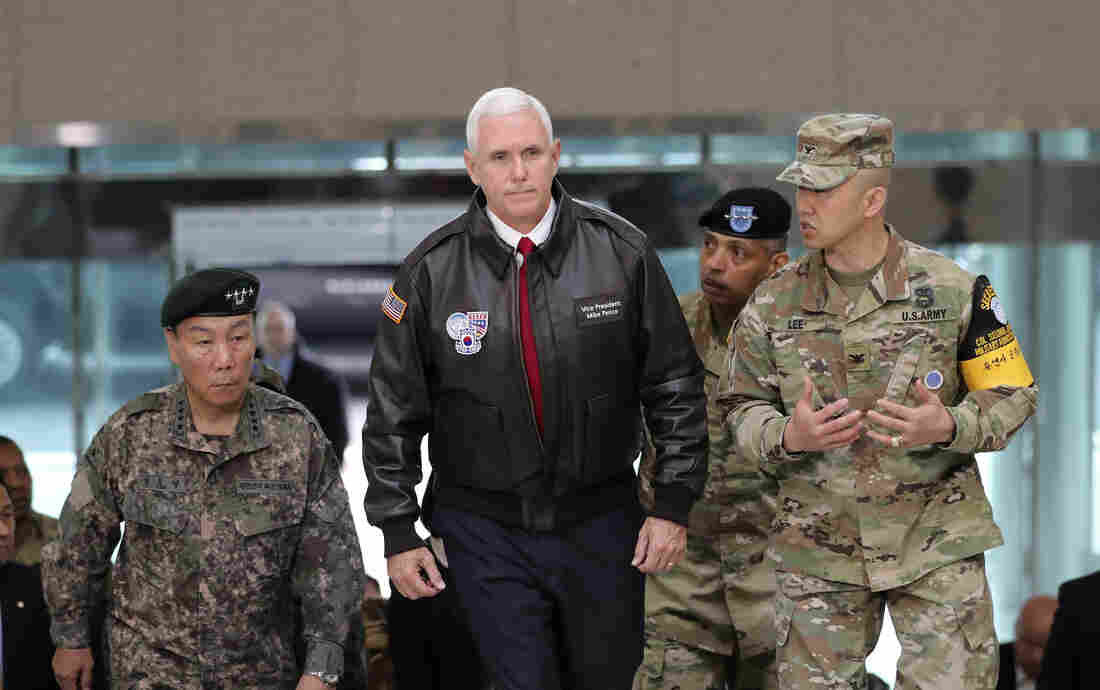 Vice President Pence arrived Monday at the South Korean border village of Panmunjom in the Demilitarized Zone, which has separated the two Koreas since the Korean War. Lee Jin-man/AP hide caption 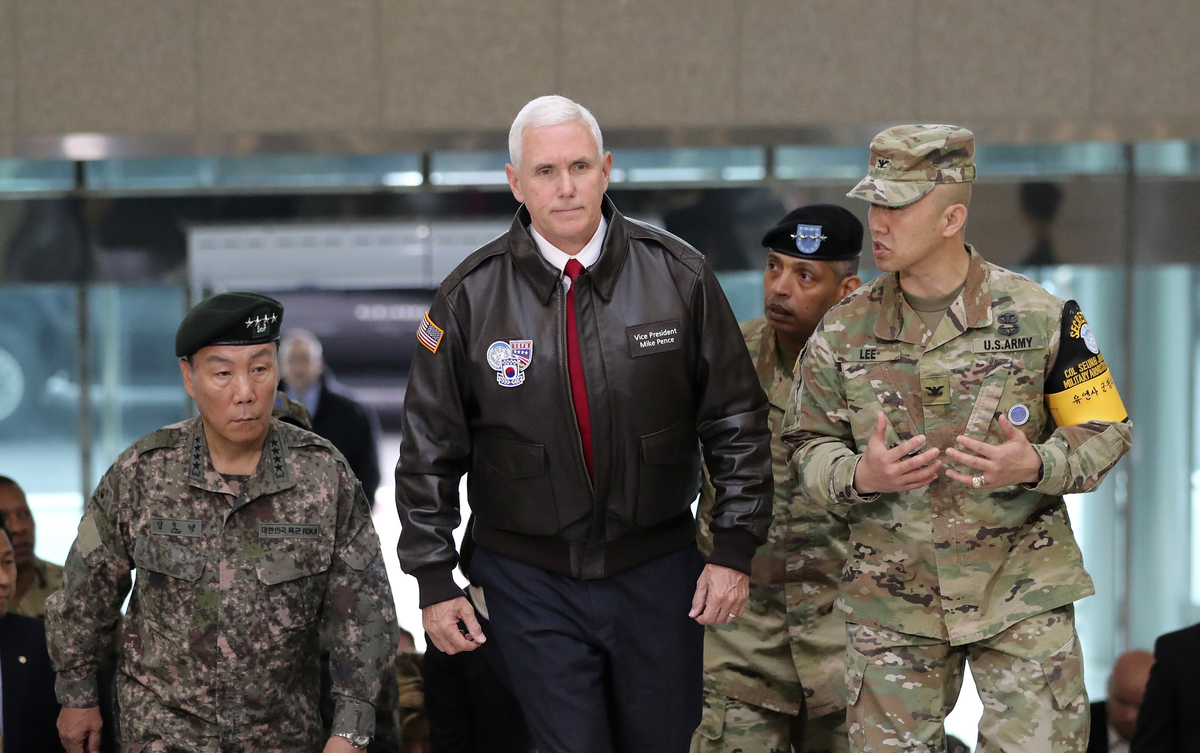 Vice President Pence arrived Monday at the South Korean border village of Panmunjom in the Demilitarized Zone, which has separated the two Koreas since the Korean War.

Vice President Pence said on a visit to South Korea on Monday that the U.S. "era of strategic patience is over" regarding North Korea and its nuclear and ballistic missile program.

"Since 1992, the United States and our allies have stood together for a denuclearized Korean Peninsula," Pence said at a joint news conference with acting South Korean President Hwang Kyo-Ahn in Seoul. "We hope to achieve this objective through peaceable means. But all options are on the table."

Pence, whose father is a Korean War veteran, earlier visited the Demilitarized Zone between the Koreas, where he could see North Korean soldiers across the divide.

Amid rising tensions with North Korea, Pence pointed to recent high-profile U.S. military actions in Syria and Afghanistan as evidence of the Trump administration's "strength and resolve."

"North Korea would do well not to test his resolve — or the strength of the armed forces of the United States in this region," the vice president warned.

Pence vowed "unwavering support" for South Korea, adding, "We are with you 100 percent."

Just ahead of Pence's arrival in Seoul, the North attempted and failed to launch an unidentified missile in its latest weapons test, further raising international concerns. The day before, it "brandished what appeared to be long-range and submarine-based missiles as part of a military parade, celebrating the 105th birthday of its late founder, Kim Il Sung," as we reported.

The U.S. moved a Navy strike group toward the Korean Peninsula earlier this month, which elicited threats from Pyongyang of "tough counteraction" should the U.S. attack, as The Two-Way reported.

So why the recent escalation of tensions with North Korea? Joel Wit, senior fellow at the U.S.-Korea Institute at the Johns Hopkins School of Advanced International Studies, explains on Morning Edition:

"Secondly, President Trump has a very different approach to North Korea than President Obama, who practiced what was called 'strategic patience.' Essentially trying to put pressure on North Korea and hoping it would come back to the negotiating table. But President Trump is really ratcheting up the pressure while still keeping open the possibility of negotiations."

Wit, who has recently met with North Korean officials, adds: "I think we should not underestimate North Korea's resolve to resist pressure from the United States."

Trump has stated that he wants to see China take a larger role in pressuring the North Korean regime. Monday afternoon, Chinese Foreign Ministry spokesman Lu Kang called for the resumption of "multi-party negotiations that ended in stalemate in 2009," according to The Associated Press.

Pence's comments at the news conference elicited concern from Russia's foreign minister, Sergey Lavrov. As the news service reports, "Lavrov told journalists in Moscow that if Pence's words can be understood as a threat to take unilateral action against North Korea, 'then this is a very risky path.' "

Pence is on an Asia-Pacific tour that will include visits to Japan, Indonesia and Australia.