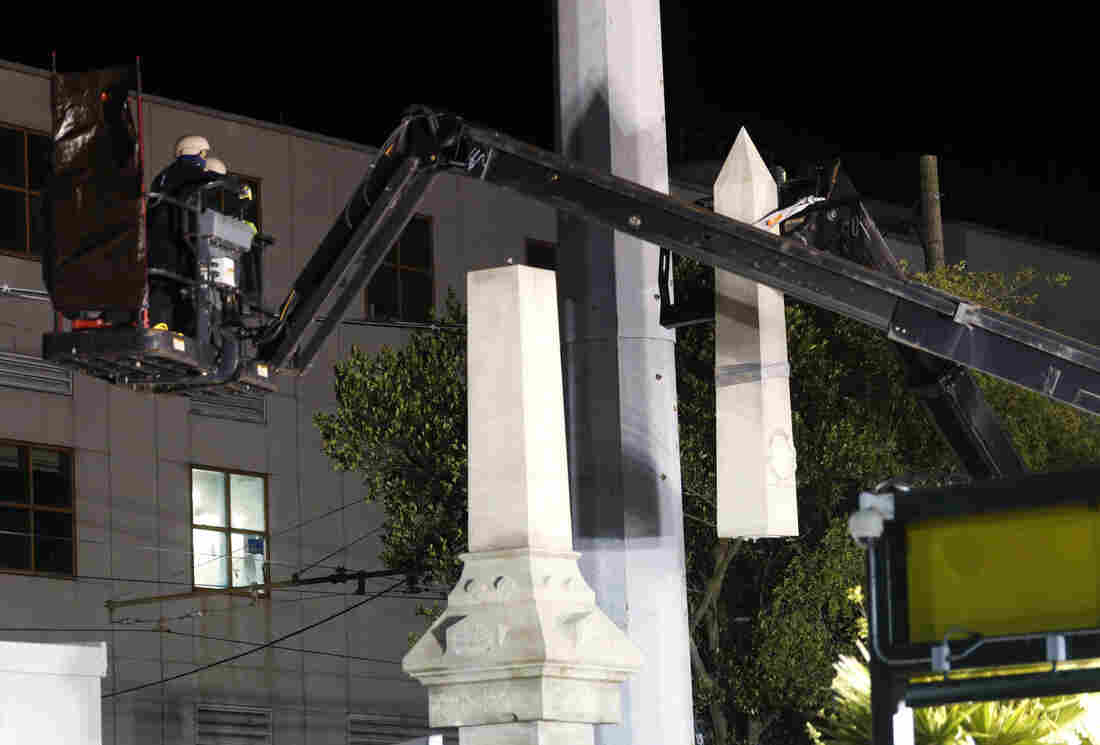 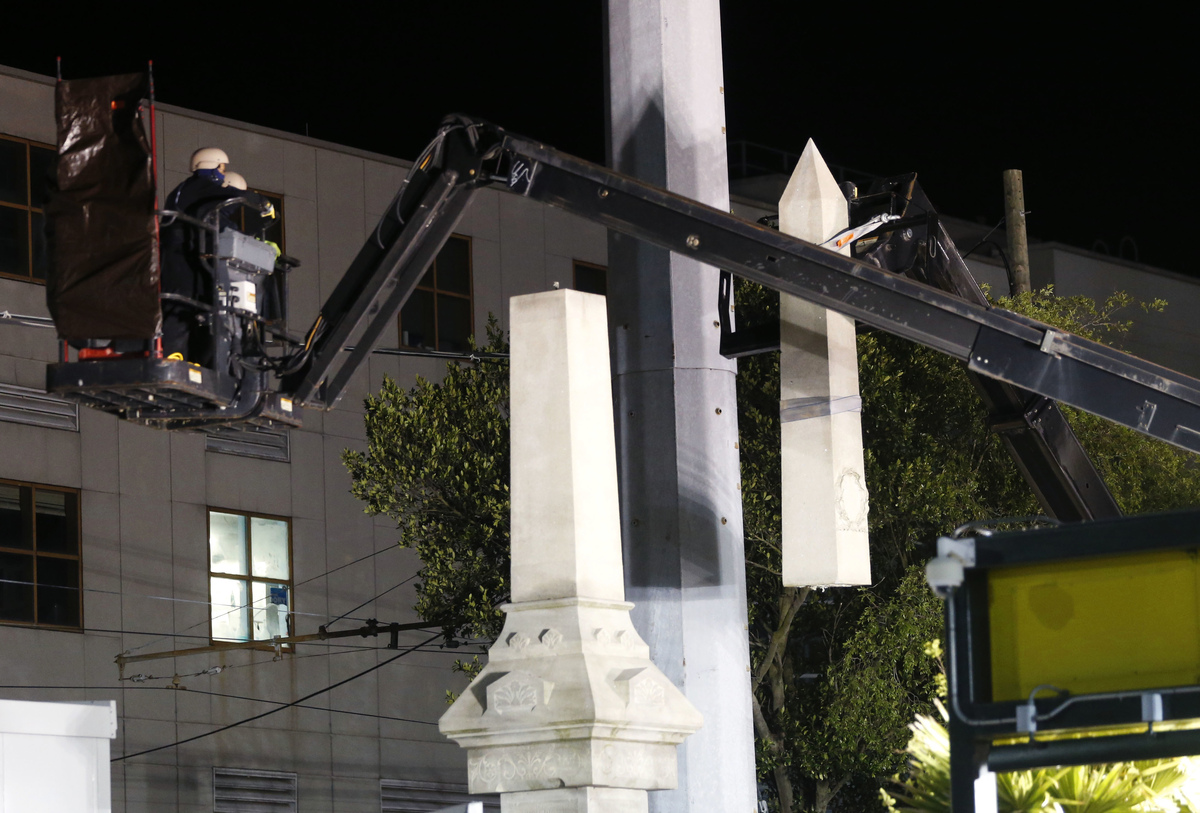 Workers dismantle the Battle of Liberty Place monument on Monday in New Orleans.

After years of legal wrangling and intimidation, New Orleans has begun the process of dismantling four monuments of the Confederate and Jim Crow eras.

The first monument, which honors members of a white supremacist paramilitary group who fought against the city's racially integrated, Reconstruction-era police force in 1874, was dismantled and removed before the sun rose Monday.

Reverence And Rage: Southerners Battle Over Relics Of The Confederacy

Following death threats, the contractors wore flak jackets and helmets as they broke down the Battle of Liberty Place monument, as WWNO's Tegan Wendland reports.

"We will no longer allow the Confederacy to literally be put on a pedestal in the heart of our city," New Orleans Mayor Mitch Landrieu was quoted as saying by The Associated Press.

Landrieu has called for the statues to be removed since 2015. He described the Liberty Place monument as the "most offensive" of the four, according to The Times-Picayune.

Relocating these confederate statues is not about taking something away from someone else. It’s about choosing a better future.

In 1989, the Liberty Place monument was removed from its prominent location on Canal Street due to construction, and repositioned to a location off the main drag in 1993.

The mayor's office said that in 1932, the city placed a plaque on the monument stating that the battle memorialized was intended to "overthrow of carpetbag government, ousting the usurpers," and "the national election of November 1876 recognized white supremacy in the South and gave us our state."

When the monument was moved in 1993, that plaque was covered with a new one that said: "In honor of those Americans on both sides who died in the Battle of Liberty Place. ... A conflict of the past that should teach us lessons for the future."

The Advocate newspaper reports that "no statue in New Orleans has had as slow or tortured an exit from the public stage as the monument to the Battle of Liberty Place." Here's more on the long, contested history:

"Up through the 1970s, respectable opinion held that the battle really had nothing to do with race. As one newspaper editorial put it after the obelisk was defaced with black paint in 1970, it was a battle against 'interlopers ... sent to the community to loot, to confiscate lands and to otherwise misrule Louisiana.'

"Like the obelisk itself, this view has been largely discarded, at least among professional historians."

About a dozen protesters gathered as the workers began to dismantle the monument, according to the Times-Picayune. "Supporters of the monuments say they're part of the city's history," Wendland added.

But Mayor Landrieu said that "relocating these Confederate monuments is not about taking something away from someone else. ... This is about showing the whole world that we as a city and as a people are able to acknowledge, understand, reconcile — and most importantly-- choose a better future."

The four statues will be initially moved to storage, then the city will look into relocating them to a museum or other location.

The city isn't releasing details about the other statues' removals due to security concerns, but has said that it has secured private funding for the jobs as of Monday. It did not state the source of the funding.