Accessibility links
New Evidence Suggests Humans Arrived In The Americas Far Earlier Than Thought : The Two-Way Until now, the earliest signs of humans in the Americas dated back about 15,000 years. But new research puts people in California 130,000 years ago. Experts are wondering whether to believe it. 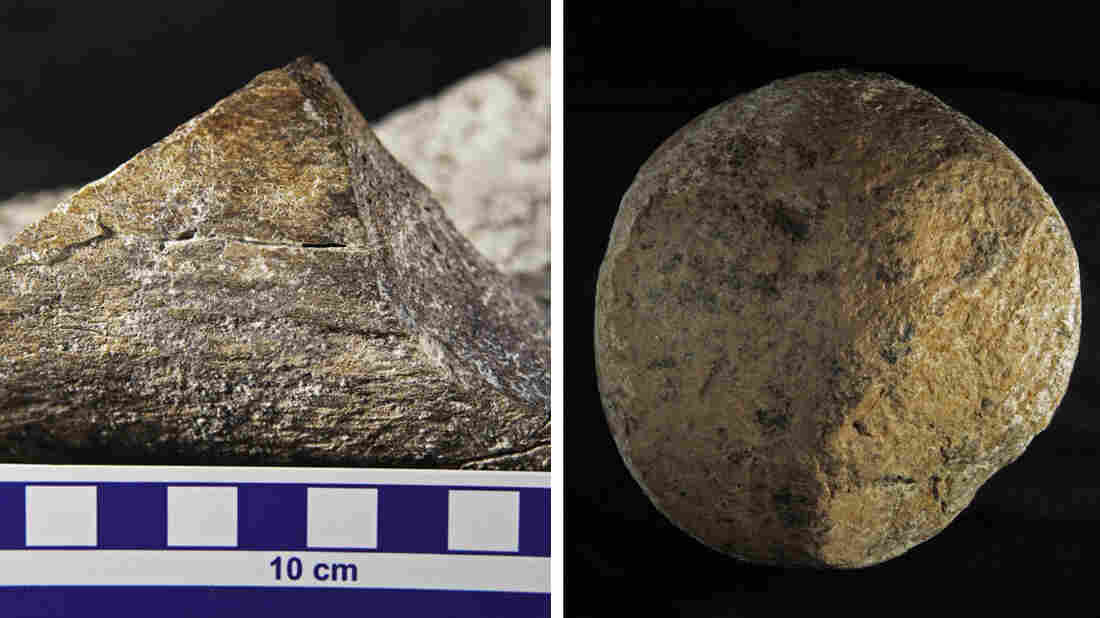 (Left) A close-up view of a spirally fractured mastodon femur. (Right) A boulder discovered at the Cerutti Mastodon site in San Diego County thought to have been used by early humans as a hammerstone. Tom Démeré/San Diego Natural History Museum hide caption 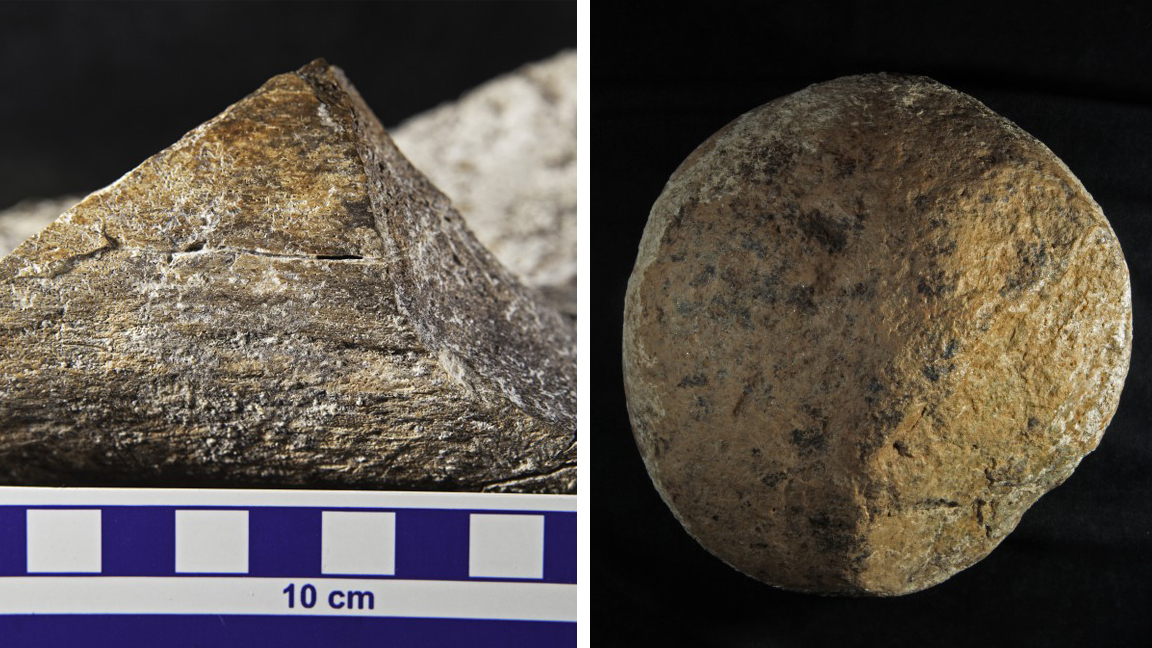 (Left) A close-up view of a spirally fractured mastodon femur. (Right) A boulder discovered at the Cerutti Mastodon site in San Diego County thought to have been used by early humans as a hammerstone.

If it's true, it would be the oldest sign of humans in the Americas ever — predating the best evidence up to now by about 115,000 years. And the claim has scientists wondering whether to believe it.

In 1992, archaeologists working a highway construction site in San Diego County found the partial skeleton of a mastodon, an elephant-like animal now extinct. Mastodon skeletons aren't so unusual, but there was other strange stuff with it.

"The remains were in association with a number of sharply broken rocks and broken bones," says Tom Deméré, a paleontologist at the San Diego Natural History Museum. He says the rocks showed clear marks of having been used as hammers and an anvil. And some of the mastodon bones as well as a tooth showed fractures characteristic of being whacked, apparently with those stones.

It looked like the work of humans. Yet there were no cut marks on the bones showing that the animal was butchered for meat. Deméré thinks these people were after something else. "The suggestion is that this site is strictly for breaking bone," Deméré says, "to produce blank material, raw material to make bone tools or to extract marrow." Marrow is a rich source of fatty calories. 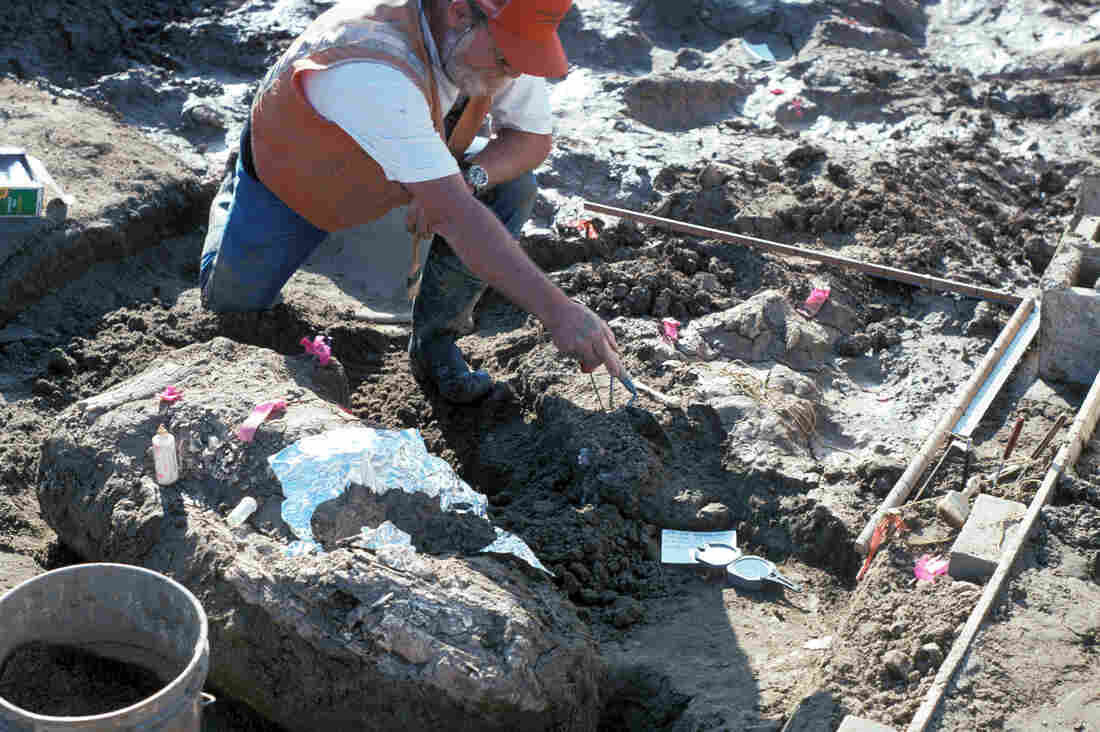 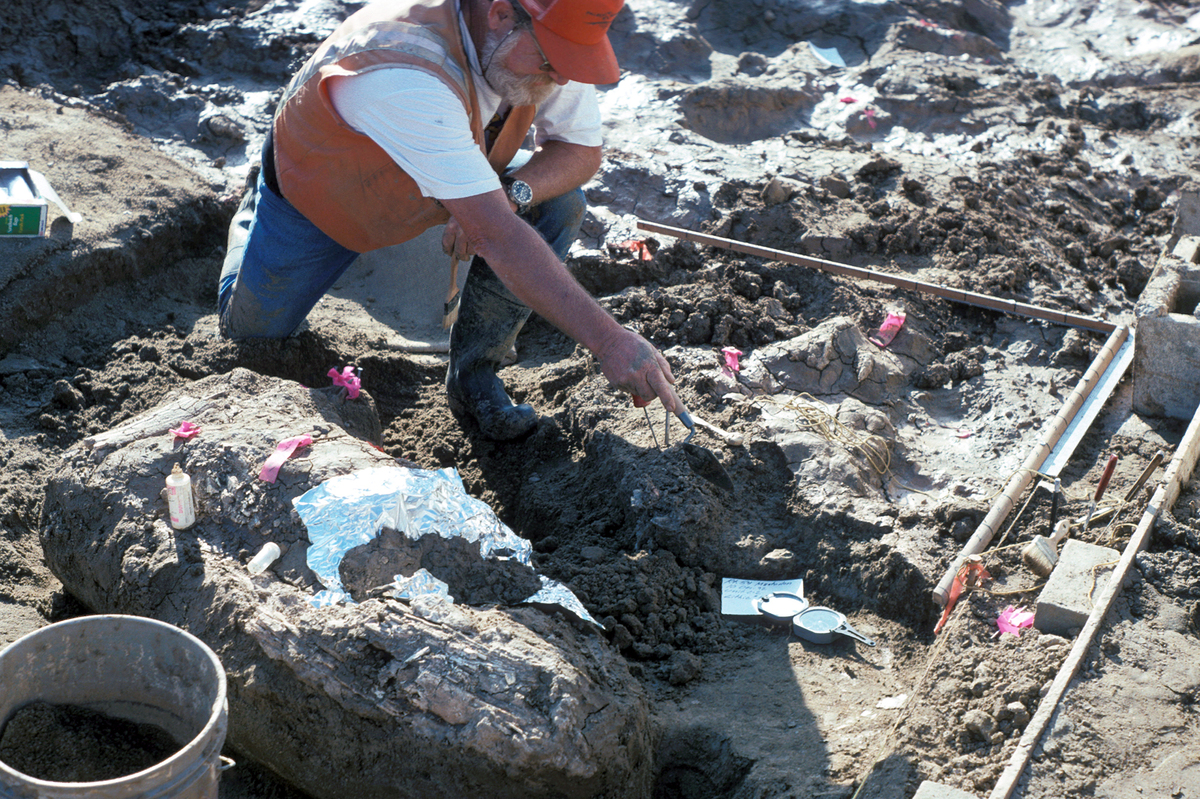 Don Swanson, a paleontologist with the San Diego Natural History Museum, points at a rock fragment near a large horizontal mastodon tusk fragment.

The scientists knew they'd uncovered something rare. But they didn't realize just how rare for years, until they got a reliable date on how old the bones were by using a uranium-thorium dating technology that didn't exist in the 1990s.

"That is an order of magnitude difference. Wow," says John Shea, an archaeologist at New York's Stony Brook University who specializes in studying ancient toolmaking. "If it's correct, then there's an extraordinarily ancient dispersal to the New World that has a very different archaeological signature from anything left behind by recent humans."

Shea says it's different because Stone Age toolmakers usually leave behind stone flakes — sharp pieces broken or "knapped" from certain kinds of rock that serve as cutting implements. There were none at the California site. Another odd thing: no signs that the mastodon was butchered for the meat.

"This is weird," Shea says. "It's an outlier in terms of what archaeological sites from that time range look like everywhere else on the planet." He suggests these bones might have been broken up by natural causes — by a mudflow, perhaps, or by the trampling of animals sometime after the mastodon died.

Another skeptic is John McNabb, an archaeologist at the University of Southampton in England. His question: How did those people get to California?

Twenty thousand years ago, archaeologists agree, people did cross over to Alaska from Siberia, perhaps more than once. Sea levels were lower then and there was a land bridge connecting the continents. In an interview with the journal Nature, which published the California research, McNabb says that land bridge wasn't there 130,000 years ago. "The sea lane in between the two continents [was] wider [then]," he says, "so that's one problem with this: How do we get humans across?"

McNabb says what's needed to really prove that this is truly an archaeological site are bones from the people who got there.

The California team counters that it has spent over 20 years examining the evidence. "I know people will be skeptical with this because it is so surprising," says team member and archaeologist Steve Holen, "and I was skeptical when I first looked at the material myself. But it's definitely an archaeological site."

Holen, with the Center for American Paleolithic Research, says these early people could have come across in boats. As for the broken bones, he says the type of fracture isn't accidental. And the way the hammerstones and bones were distributed in the ground doesn't look natural.

One question the team can't answer is who these people were. A genetic technique that uses mutations in a population's genome as a sort of "clock" says the first common ancestor of Native Americans lived about 20,000 years ago. So if there were indeed earlier settlers, it could be they made an arduous migration from Siberia, only to die out without leaving any descendants.