Accessibility links
Fyre Festival Turns Out To Be Half-Built Scene Of Chaos : The Two-Way Tickets cost thousands for what organizers were calling "the cultural event of the decade." But when visitors arrived on Grand Exuma, they found a tent city without enough power, security, or food. 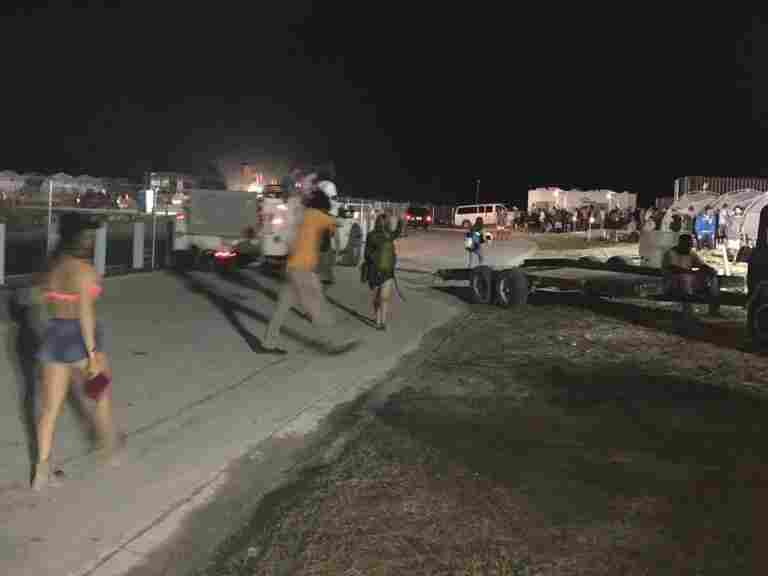 Fyre Festival attendees walk around the event site on Thursday night in Grand Exuma, Bahamas. Festivalgoers had paid thousands of dollars for villas and lodges on the beach, but instead found a chaotic tent city. Miles Braun hide caption 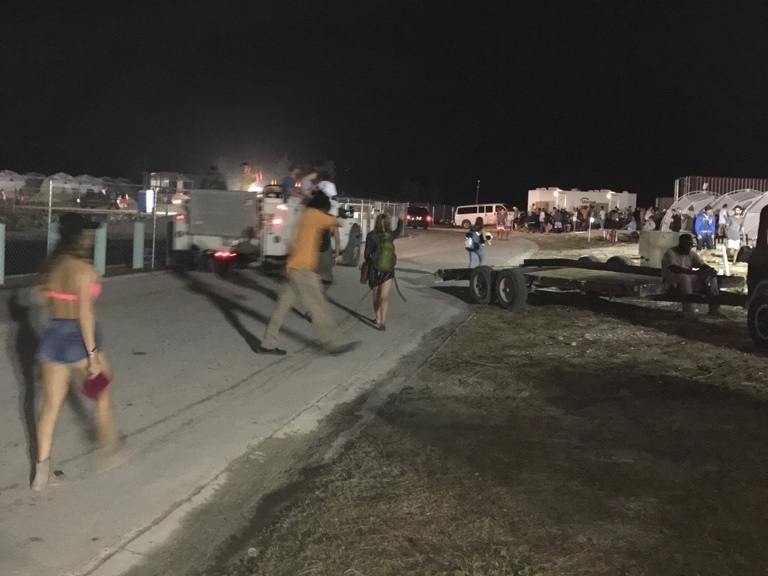 Fyre Festival attendees walk around the event site on Thursday night in Grand Exuma, Bahamas. Festivalgoers had paid thousands of dollars for villas and lodges on the beach, but instead found a chaotic tent city.

Perhaps you're a person who buys festival wear but finds Coachella too plebian. Perhaps you find other music festivals off-putting because you can't bring your own yacht. Or maybe you just think it sounds awesome to hang out on an island in the Bahamas and you have a few thousand dollars to blow.

In that case the Fyre Festival was supposed to be the event – nay, cultural moment! – for you.

(And yes, that's FYRE, not fire, because it was going to be LIT. And also because Fyre Media Inc. is the name of rapper Ja Rule's talent-booking company, which organized the luxstravaganza, or #dumpsterfyre, as you'll soon see.)

In a promo video posted in January full of frolicking models, the Fyre Festival promised (in seemingly random order) "the best in food, art, music and adventure / once owned by Pablo Escobar / on the boundaries of the impossible / Fyre is an experience and festival / A quest / to push beyond those boundaries."

Thursday was to be the first day of the two-weekend event.

"You'll be flown roundtrip on a custom, VIP configured Boeing 737 aircraft between Miami International Airport and Exuma International Airport on Great Exuma," said the festival's website. "Guests will be staying in modern, eco-friendly, geodesic domes. ... Unplug from the everyday and ignite your flame in the Exumas."

The acts scheduled to perform included Major Lazer and Blink-182, as well as a DJ "who specializes in producing '70s and '80s rock remixes for clients that include Middle Eastern and European royalty," as The Wall Street Journal reported.

The organizers built buzz by having celebrities tweet and Instagram about the festival. In a now-deleted tweet from March 27, Ja Rule wrote, "This is where the cool kids will be April 27-30 May 5-8!!! #fyrefestival #fyre."

Ticket prices were steep – but of course they were, since it was going to be "the cultural event of the decade." The Los Angeles Times reported in January that passes, which included accommodations and chartered flights from Miami, started at $1,595 and stretched to $399,995, which included dinner with a performer. (Though prices varied widely according to accommodation, and attendees interviewed by NPR said tickets could be had for as little has $900.)

But there were signs of trouble in paradise.

According to Journal's article from April 2, the organizers missed a series of payments to performers, though it had begun making progress in paying them. The newspaper noted that festivals typically lose money in their early years, and face high upfront costs.

No matter. Just days before the festival was to begin, @fyrefestival was shaking the sand out of its hair and Instagramming without concern.

But there was to be no dancing on the beach.

Yesterday, ticketholders began arriving at the festival, and found the site in disarray. Instead of the promised (and paid for) villas and lodges, festivalgoers found instead row after row of the same white tents.

"You just get dropped off on this island, and you're just standing there," said Seth Crossno, who had flown to the Bahamas with three other friends from Raleigh. "It looked like a disaster relief area." He said that cars and trucks were driving around, and that shipping containers littered the area.

Crossno said a man stood on a table shouting out directives.

"They had no way to communicate with anybody," said Crossno. "I don't know why no one went on the main stage and got on the microphone to get the crowd's attention and tell people what was going on. Just total incompetence." He added that house music blared in the background.

He estimated that a thousand people were there, and more kept arriving.

Crossno arrived at the festival around 5:30 p.m. Thursday night, and within a couple of hours, he and his friends were trying to get off the island. "It was a huge mess from the start," he said. Together, Crossno said he and his friends paid about $12,000 to attend.

Janan Buisier, who traveled from Dallas, said she spent more than $1,300 to go to the event. At first, she and her friends wanted to make the best of a bad situation, she said, "but then we saw how it started getting dangerous." She said the site didn't have enough security, lights, or food. 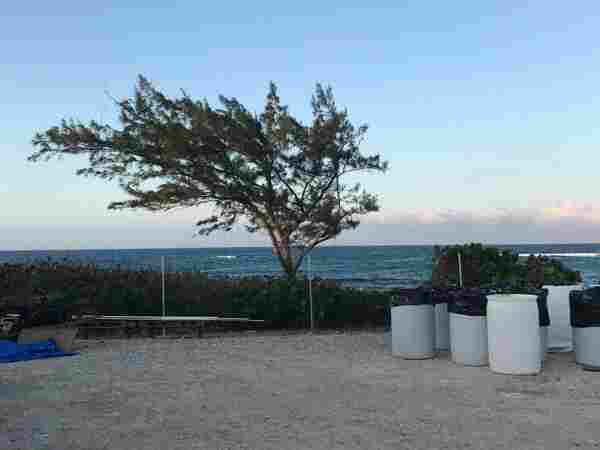 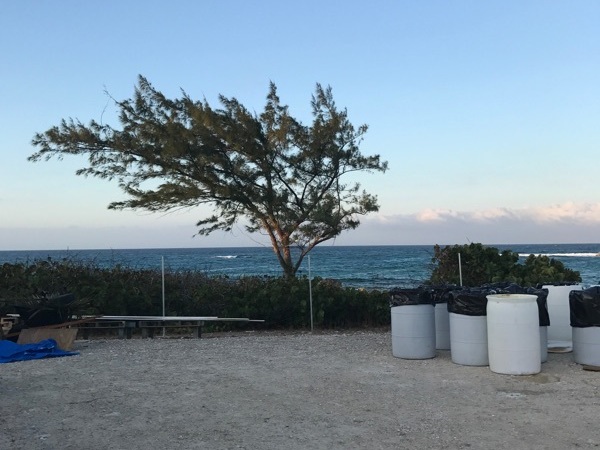 The view from Fyre Festival.

The festival started arranging flights to get people back to Miami, including ones that Crossno and Buisier were able to get on.

The Bahamas Ministry of Tourism tweeted out a statement Friday morning, saying it was "extremely disappointed in the way the events unfolded yesterday" and said that although it was not an official sponsor of the festival, it had lent its support when asked. "The event organizers assured is that all measures were taken to ensure a safe and successful event but clearly they did not have the capacity to execute an event of this scale."

It added that it hopes festival visitors would consider returning to the Bahamas in the future "to truly experience all of our beauty."

Not long after, the Fyre Festival website posted its own statement:

Fyre Festival set out to provide a once-in-a-lifetime musical experience on the Islands of the Exumas.

Due to circumstances out of our control, the physical infrastructure was not in place on time and we are unable to fulfill on that vision safely and enjoyably for our guests. At this time, we are working tirelessly to get flights scheduled and get everyone off of Great Exuma and home safely as quickly as we can. We ask that guests currently on-island do not make their own arrangements to get to the airport as we are coordinating those plans. We are working to place everyone on complimentary charters back to Miami today; this process has commenced and the safety and comfort of our guests is our top priority.

The festival is being postponed until we can further assess if and when we are able to create the high- quality experience we envisioned.

We ask for everyone's patience and cooperation during this difficult time as we work as quickly and safely as we can to remedy this unforeseeable situation. We will continue to provide regular updates via email to our guests and via our official social media channels as they become available.

Whether the circumstances were truly out of the Fyre Festival's control will probably be a matter for the lawyers. Crossno, who on Friday morning was back in Miami after a very strange trip, said that if he doesn't get his money back, he will sue.

But first, he has a warning for those who bought tickets for next weekend: "Do not go to this festival," he said. "It's a scam. It's not real."

All Things Considered producer Greg Dixon contributed to this report.