Accessibility links
Gunman Kills 1, Wounds 6 In Shooting At A Pool Party In San Diego : The Two-Way Witnesses say the gunman, who was white, was holding a beer as he fired into the crowd. All of his victims are people of color.

Gunman Kills 1, Wounds 6 In Shooting At A Pool Party In San Diego

Gunman Kills 1, Wounds 6 In Shooting At A Pool Party In San Diego 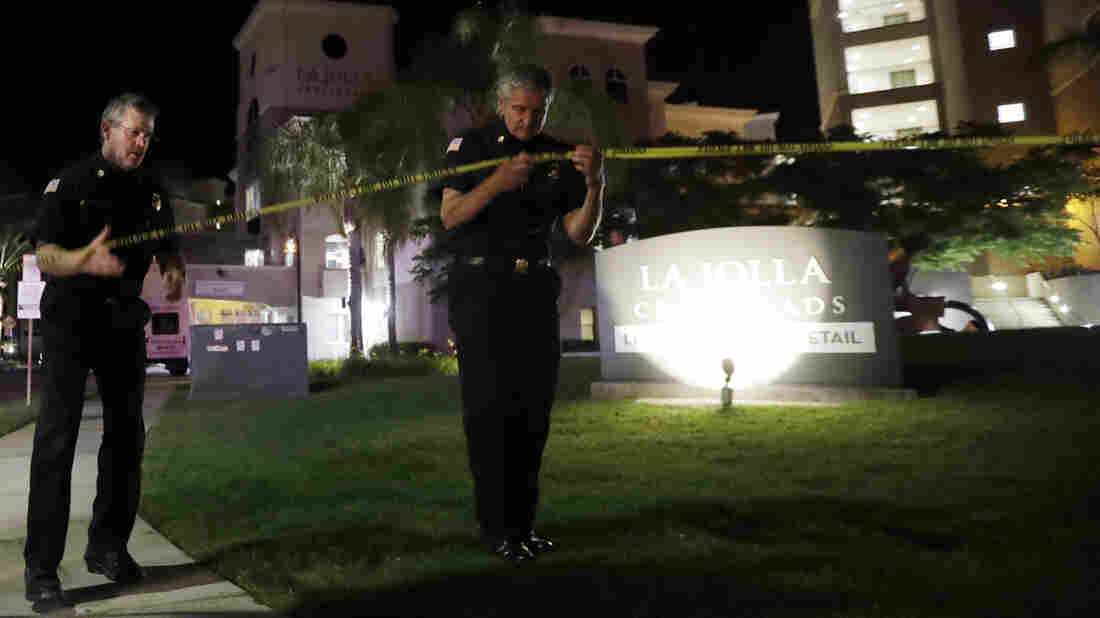 San Diego police officers work outside the scene of a shooting at an apartment complex Sunday, after a gunman opened fire on a crowd of people. Gregory Bull/AP hide caption 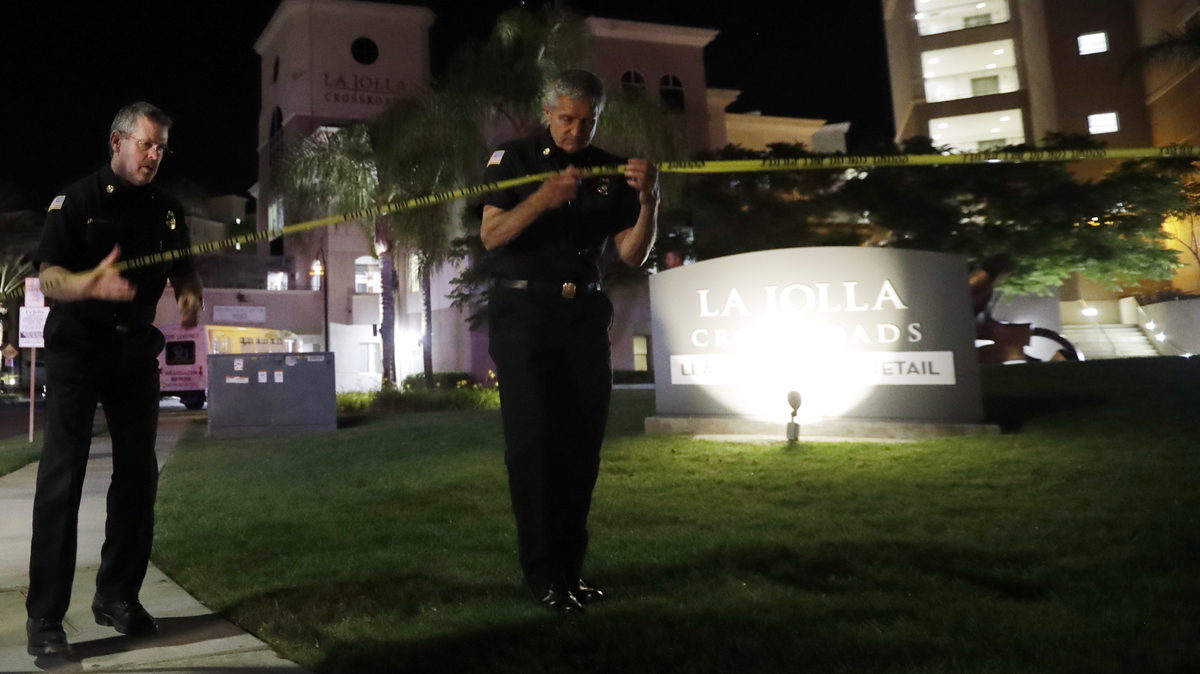 San Diego police officers work outside the scene of a shooting at an apartment complex Sunday, after a gunman opened fire on a crowd of people.

San Diego police shot and killed a man suspected of shooting seven people at an apartment complex near the University of California Sunday. Witnesses say the man fired on a birthday pool party as he sat in a deck chair.

One woman died after being shot at the party. Three officers confronted the shooter after a police helicopter reported that the suspect seemed to be reloading what Police Chief Shelley Zimmerman called "a large-caliber handgun."

Police are still trying to determine a possible motive, said Zimmerman, who did not rule out the possibility that the attack was a hate crime. The suspect was white; all of the shooting victims are people of color — six African-Americans and one Hispanic man. In addition to those shot, one man fell and broke his arm as he fled the area of the violence.

Speaking at a news conference early Monday morning near the scene of the shooting. Zimmerman identified the deceased suspect as Peter Selis, 49, a resident of the at the La Jolla Crossroads apartments complex where the shooting took place in University City. She said it wasn't yet clear if Selis knew any of the victims.

The shooting was reported shortly after 6 p.m. Sunday, at what Zimmerman described as a large party. Witnesses have told local media that the gunman made no attempt to hide or flee the area.

"We could see the shooter sitting there with a beer in one hand, and the gun in the other," a man who was at the apartment complex tells local TV news ABC 10.

Police say Selis fired into the crowd of people at the birthday party. A police helicopter was the first to arrive over the scene, spotting multiple victims and the suspect.

"The helicopter was able to direct the ground units, as to exactly where the suspect was in the pool area," Zimmerman said.

Selis was a father and a car mechanic who had "faced crushing debt," the San Diego Union-Tribune reports, citing a 2015 bankruptcy filing.

The newspaper also spoke to a witness who reported that moments before the shooting started, a friend had offered Selis something to eat and drink at the party.

"There was no indication that he was there to do evil," witness Drew Phillips tells the Union-Tribune.

All of the people who were shot Sunday are adults, police say, including four women.

"This was truly a horrific act of violence that took place here today," Mayor Kevin Faulconer said at the news conference. He credited the police response with preventing more bloodshed and loss of life.