May Day Marchers Around The World Celebrate Workers, Immigrants

May Day Marchers Around The World Celebrate Workers, Immigrants

May Day protests and rallies around the world and across the U.S. are celebrating labor, calling for greater protections and benefits for workers and highlighting the contributions of immigrants.

At least one protest has turned violent: In Paris, protesters threw "gasoline bombs and other objects" at police, while officers threw tear gas at the crowd and clubbed some demonstrators with truncheons, Reuters reports. Three police officers were injured, including one who was seriously burned, the wire service says.

In Turkey, police used tear gas against protesters attempting to march to Istanbul's Taksim Square, where demonstrations were prohibited, AFP reports. At least one protester was arrested for defying the ban.

Thousands of garment workers in Bangladesh gathered to demand wage increases, according to The Associated Press. Unions in Greece marched and critiqued austerity measures. Left-wing parties in Poland protested the conservative party in power, calling for protections not just for workers but for civic rights. In Moscow, two marches drew from "nostalgia for Soviet times," the AP writes. 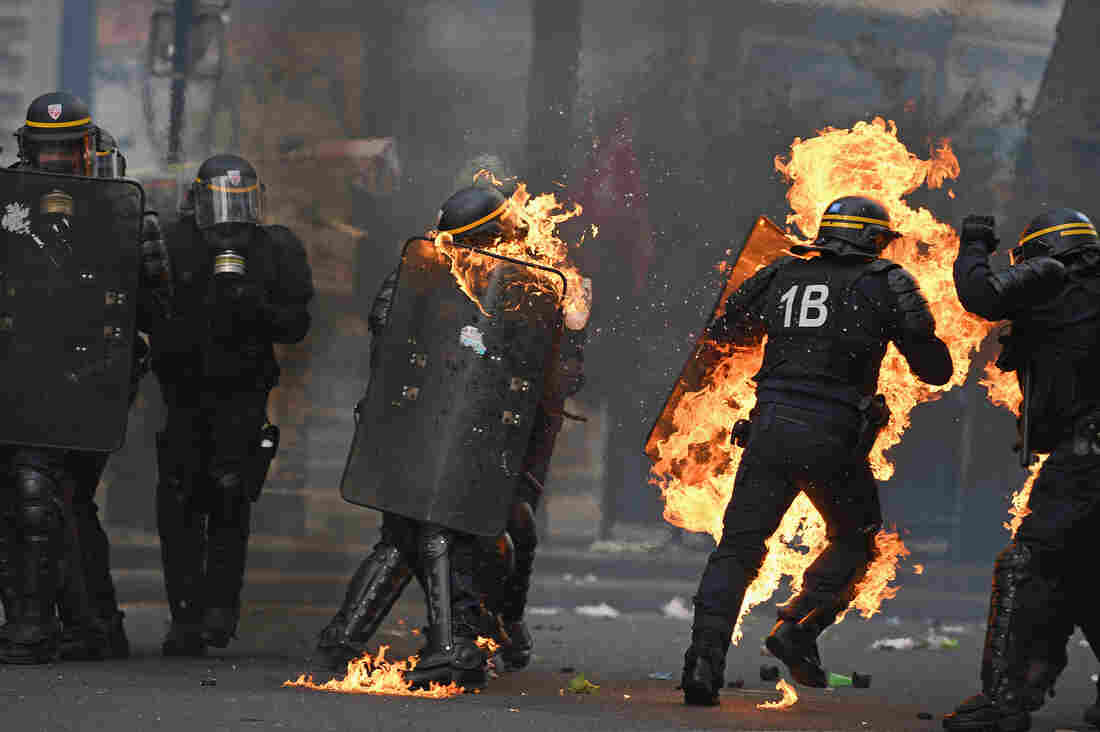 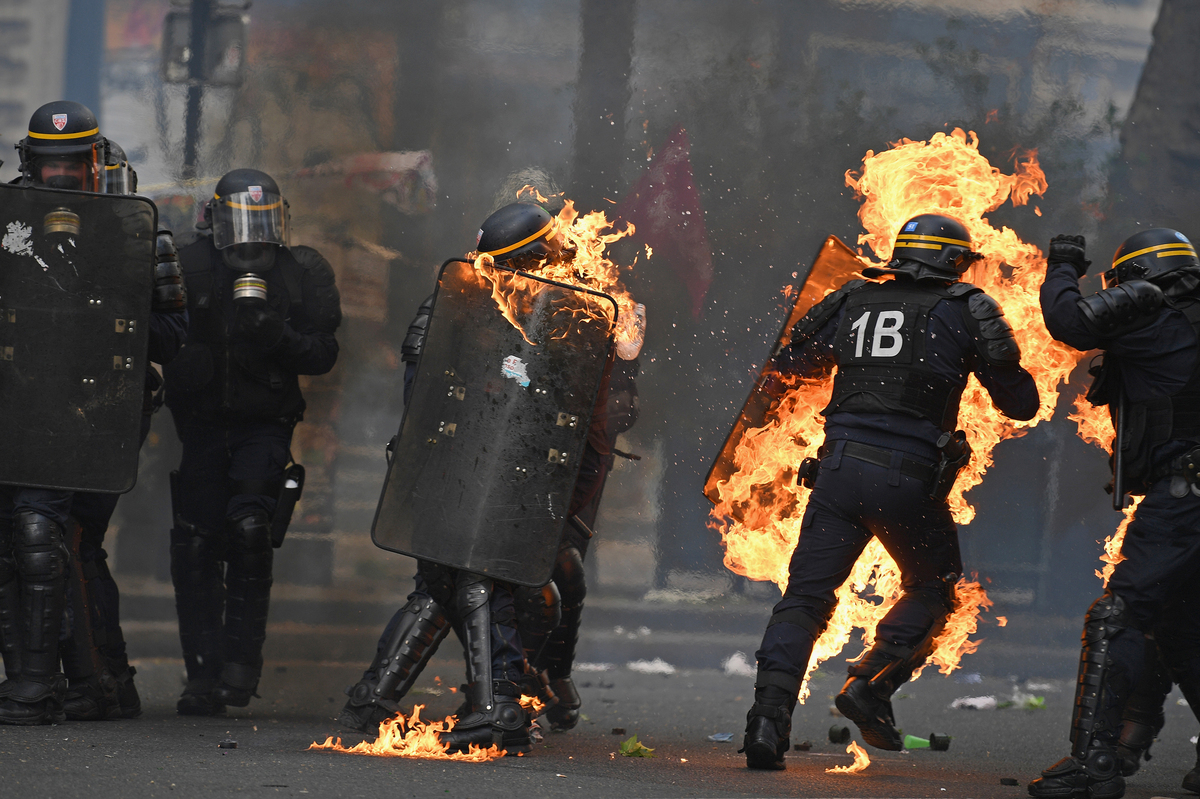 In Paris, May Day protesters threw gasoline bombs, causing fire on the streets and leaving at least one police officer badly burned on Monday.

In Venezuela, there are competing marches, both for and against the government, Al Jazeera reports.

The first day in May has been a holiday for labor groups and leftist organizations for more than a century. May Day is a national holiday in many countries, but not in the U.S.

But as NPR's Kirk Siegler has reported, protests in the U.S. are expected to be larger this year than usual, driven by opposition to President Trump's policies.

Many U.S. protests are focusing on immigration. In 2006, May Day in the U.S. was marked by major immigration protests across the country, including a boycott of school and work.

Organizers are calling for another nationwide strike by immigrants and their allies this May Day. It will be the second such strike since Trump took office; Feb. 16 was also a "day without immigrants," organized in response to Trump's immigration policies and travel ban.

In Kennett Square, Pa., about an hour west of Philadelphia, a few dozen people gathered at a march. Most of the immigrants who showed were farmworkers, reports NPR's Joel Rose. 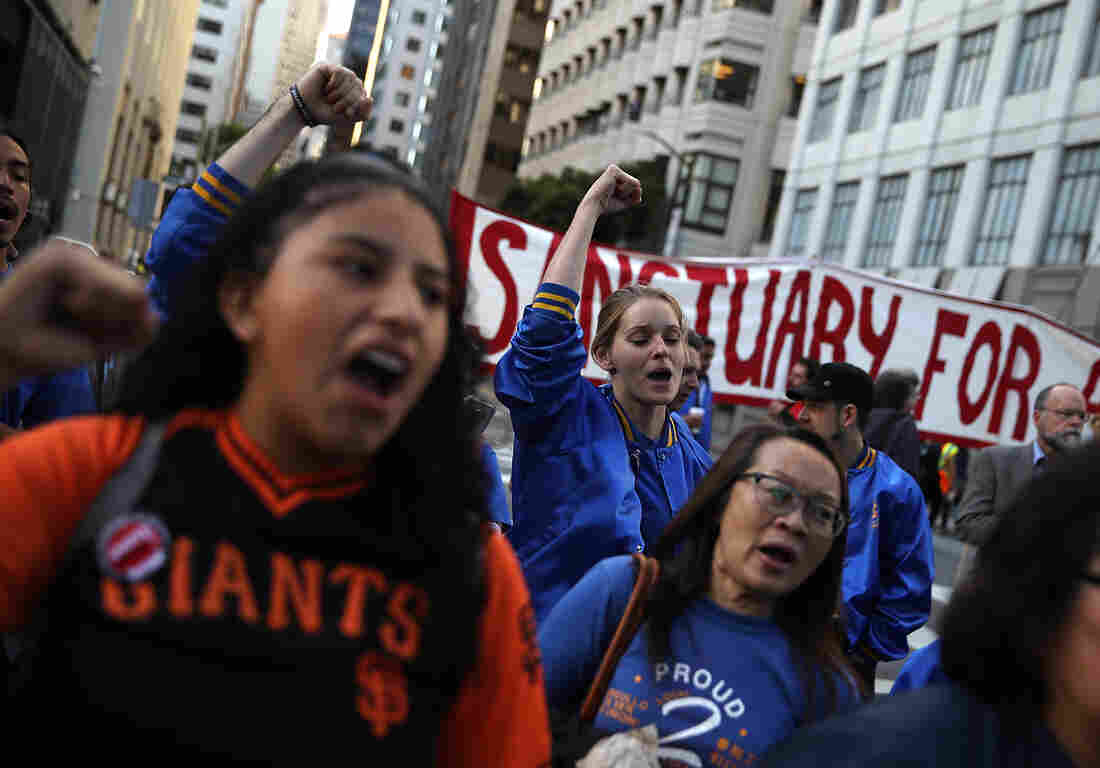 Protesters chant during a May Day demonstration outside a U.S. Immigration and Customs Enforcement office in San Francisco on Monday. Thousands are expected to take to the streets across the United States to participate in May Day demonstrations. Justin Sullivan/Getty Images hide caption 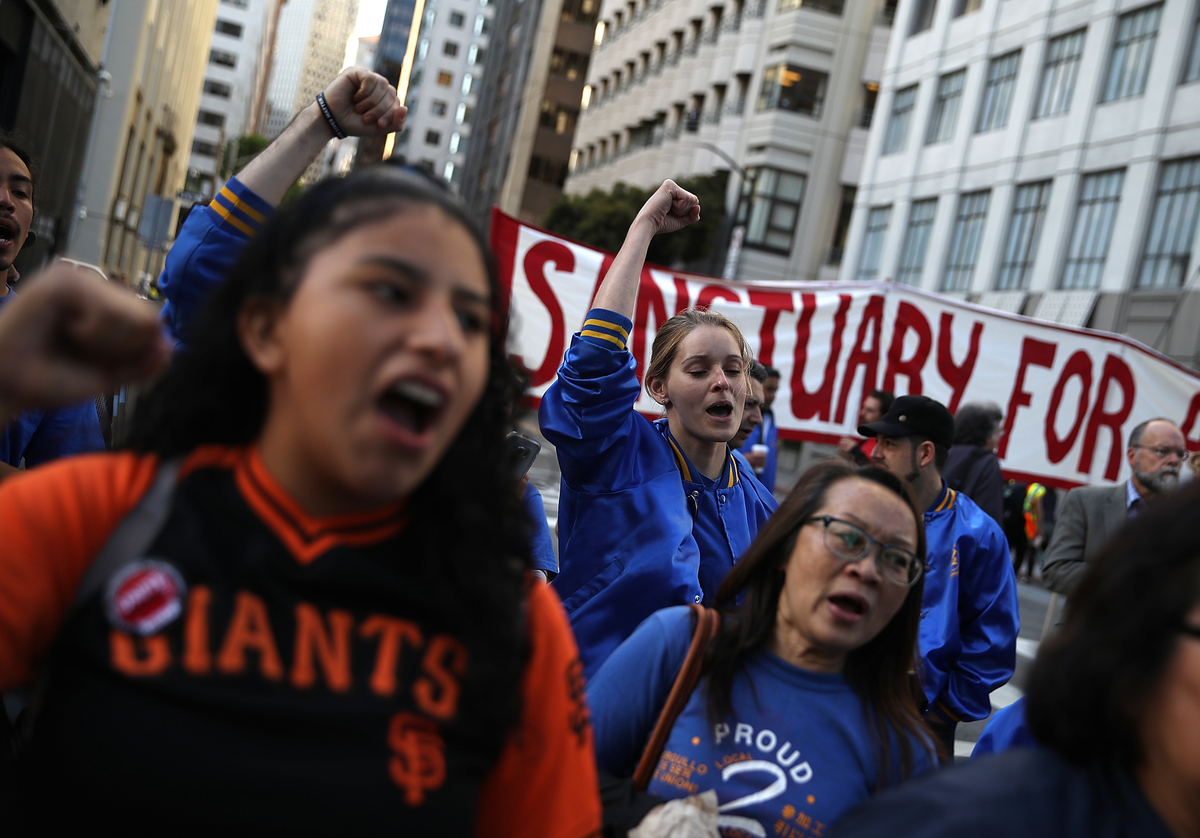 "They gathered at a park and then marched through the center of town chanting and holding up banners," Joel says. He reports that there were recently immigration raids at a nearby mushroom producer — mushrooms are a major industry in the area. The immigration officials were reportedly looking for information about four men.

"They didn't find them, but they did arrest at least a dozen others and put them in deportation proceedings," Joel says. "Organizers say that likely drove down turnout for the march today because people are scared."

Rallies and marches are happening nationwide.

'No ban, no #wall, #sanctuary for all': Brass Liberation Orchestra at #MayDay2017 rally in San Francisco, via @bertjohnsonfoto pic.twitter.com/Mf5a27r7Jl

In Seattle, previous May Day marches have turned violent, with police using pepper spray against rock-throwing protesters. But this year, authorities are worried about a different kind of violence — "crowd-on-crowd conflict," as Seattle Police Capt. Chris Fowler puts it.

"A group of Trump supporters is expected to counter-protest," explains Simone Alicea of member station KNKX, in addition to the "anti-fascist and anti-capitalist groups who are likely to demonstrate."

"Last week, he again defended Trump administration immigration efforts, as media reports indicate Clarke may get a job with the Department of Homeland Security," Quirmbach says.