Accessibility links
Puerto Rico Makes Unprecedented Move To Restructure Billions In Debt : The Two-Way The territory, which is ineligible for bankruptcy, filed to begin a similar procedure tailor-made for its more than $70 billion debt crisis, which is likely to dwarf Detroit's 2013 Chapter 9 filing. 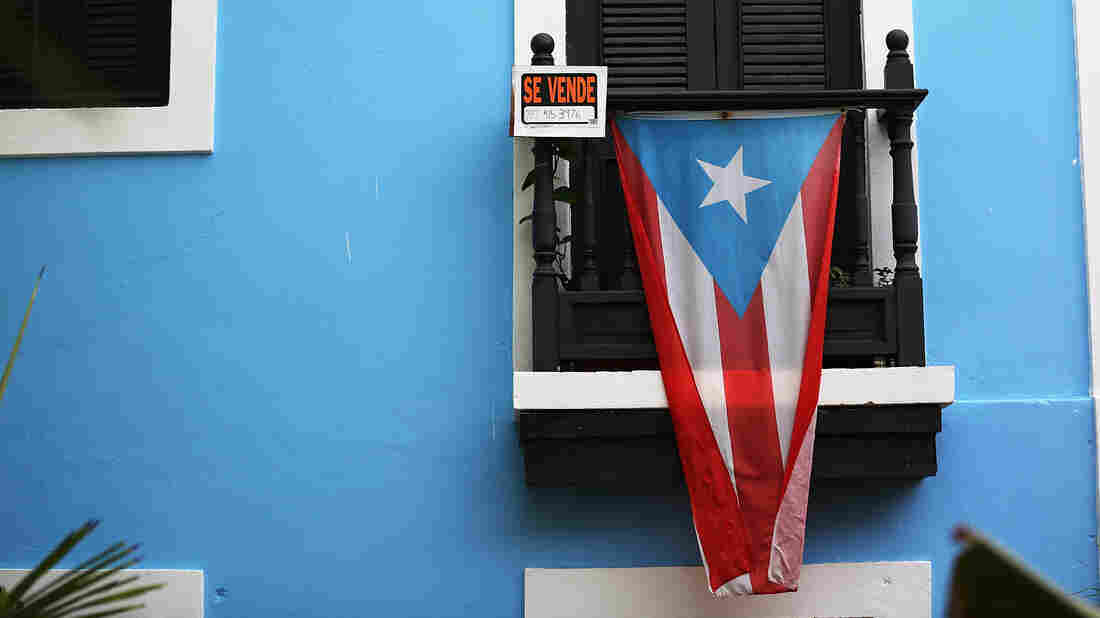 A Puerto Rican flag hangs beside a for-sale sign on a balcony in San Juan in summer 2015. Joe Raedle/Getty Images hide caption 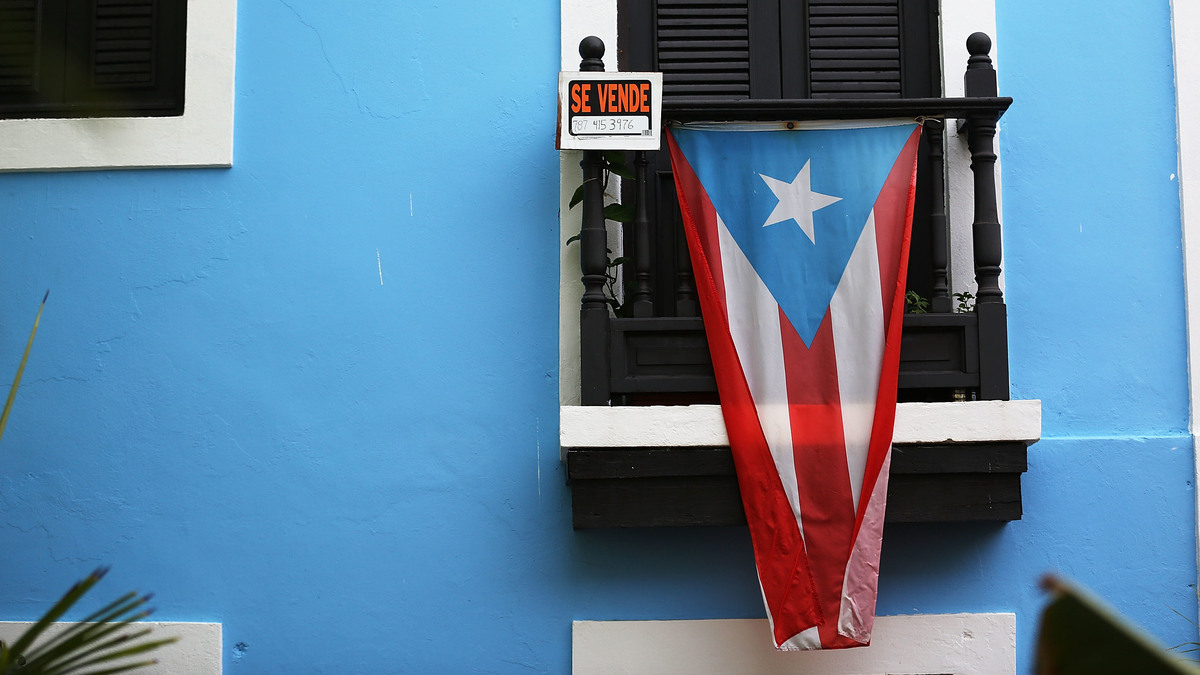 A Puerto Rican flag hangs beside a for-sale sign on a balcony in San Juan in summer 2015.

Puerto Rico has asked for a form of bankruptcy protection to help it grapple with more than $70 billion in public-sector debt. The unprecedented maneuver, requested by the governor and filed shortly afterward by a federal oversight board, sets in motion what would likely be the largest municipal debt restructuring in U.S. history.

By comparison, Detroit's 2013 bankruptcy, which sought relief from some $18.5 billion in debt and liabilities, made it the largest such filing in the country's history at the time.

"After extensive discussions in good faith and the opening of the financial books of the Government of Puerto Rico to the creditors, there has not been sufficient progress in the negotiations," the U.S. territory's governor, Ricardo Rossello, said in a statement.

After the inability of obtaining an agreement with creditors, we request to the FOM Board the protection for PR under Title III of PROMESA. pic.twitter.com/qnrPdQ8GsR

The situation now heads to federal court, where the struggle between Puerto Rico and its disgruntled creditors will be decided. The territory also has more than $49 billion in pension liabilities.

But don't call it a "bankruptcy," exactly, since the territory isn't technically eligible for the same Chapter 9 protection as states. Rather, Congress passed a law last year specifically to deal with Puerto Rico's debt problem, which has been simmering for years. Among other things, the law, called PROMESA, set up a federal oversight board to handle the territory's debt negotiations and imposed a stay on financial obligations it owed.

It set up a bankruptcy-like process tailor-made for Puerto Rico. NPR's Camila Domonoske recently broke down the procedure:

"PROMESA doesn't call this 'bankruptcy,' and it's not identical to Chapter 9. But the underlying principles are the same.

" 'It mirrors conventional bankruptcy processes that are ordered and arbitrated through a court system,' says Eric LeCompte, the executive director of Jubilee USA Networks, a religious development organization that supports debt relief and debt forgiveness.

"The 'Title III' process, as it's called in PROMESA, allows Puerto Rico to address all of its debts at once, in a comprehensive process — which even Chapter 9 doesn't allow, LeCompte says. It's essentially a bankruptcy process custom-built for Puerto Rico's debt crisis."

The island has been grappling with runaway debts for years, though the situation finally reached a crisis in 2015, when the island's governor at the time announced that its debts were unpayable as long as it hoped to provide basic services to residents.

Camila notes that since then, Puerto Rico has been buffeted by "defaults on loan payments, budget cuts and tax hikes" — including significant austerity measures for Puerto Ricans.

And those economic woes have taken their toll. In a court filing Wednesday, the federal oversight board laid out some grim numbers:

The stay imposed by PROMESA expired overnight Monday, and The New York Times reports that right on cue, "bondholder groups and at least one bond insurer sued" on Tuesday.

As The Wall Street Journal reports, Puerto Rico will now "face off against angry hedge funds, mutual funds and bond insurers in the court-supervised proceeding known as Title III, a legal mechanism created by Congress to restructure debts by force if negotiations broke down."

In its filing, Puerto Rico's federal oversight board expressed optimism about the legal wrangling to come.

In other words, the board remains "hopeful that continued negotiations (including through mediation) will lead to consensual resolutions such that Puerto Rico will once again be able to experience economic and social prosperity after this difficult process is resolved."