Accessibility links
'Is That Your New Pink Leg?!': A Girl Is Embraced As She Shows Off Her Prosthesis : The Two-Way Footage of a girl wearing a new sports blade at her school in Birmingham, England, goes viral, inducing effects that range from involuntary "Awwws" to spontaneous tears. 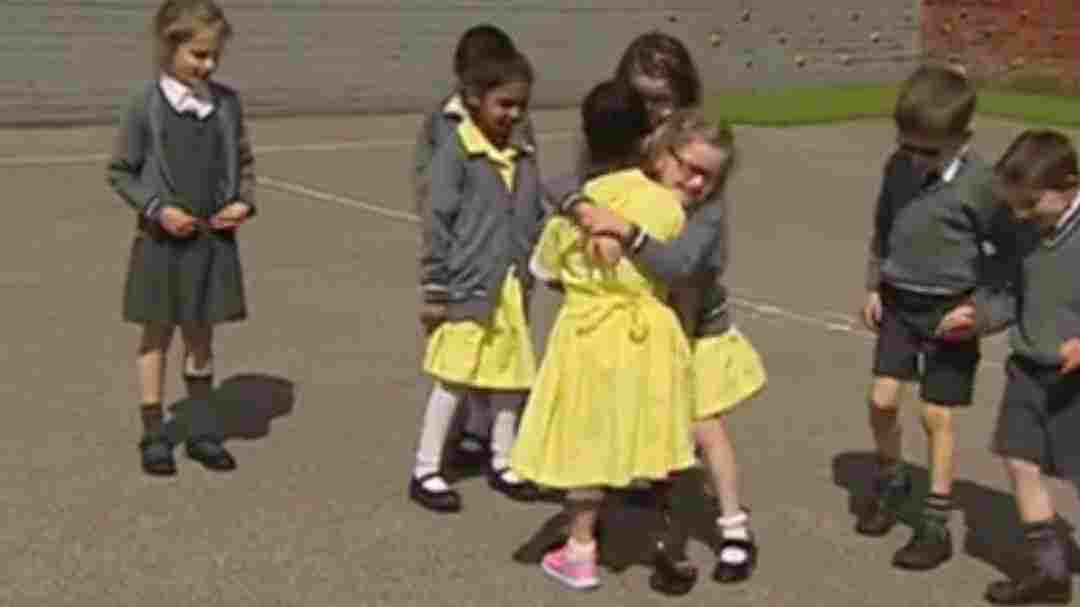 Schoolmates give Anu, 7, hugs after she wore her new prosthetic sports blade on the playground at her school in Birmingham, England. BBC Midlands hide caption 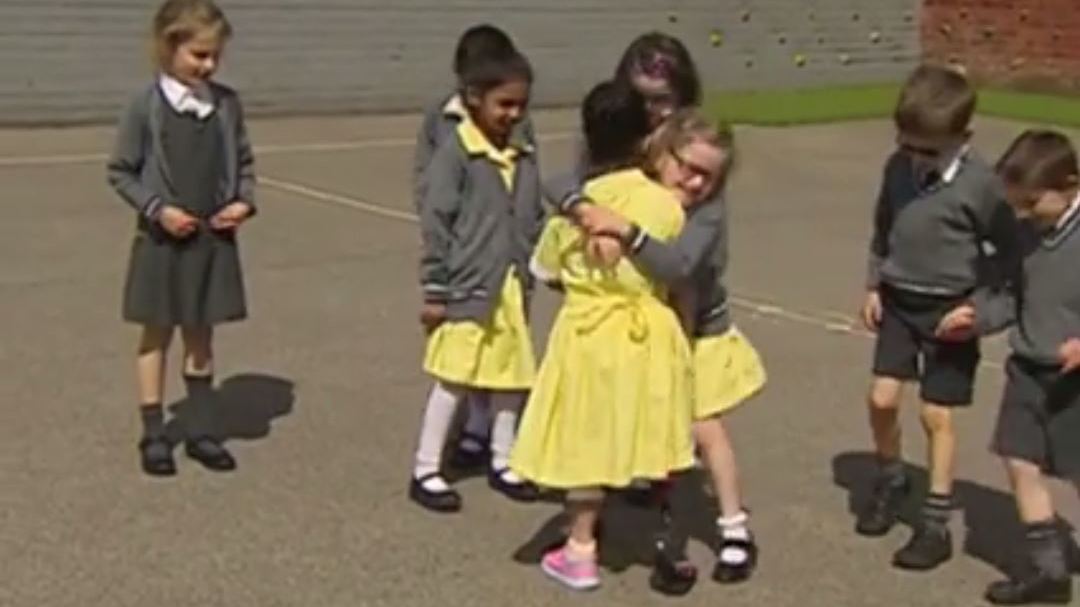 Schoolmates give Anu, 7, hugs after she wore her new prosthetic sports blade on the playground at her school in Birmingham, England.

Anu is seven and goes to school in Birmingham. Look what happened when she showed her friends her new sports blade. It's just gorgeous!🏃‍♀️ pic.twitter.com/Aa1UlnhlQy

Video of a little girl running onto the playground to show off her new sports blade prosthesis has gone viral — and we'll warn you that the video may induce effects ranging from involuntary "Awwws" to spontaneous tears.

Anu, a cute and plucky 7-year-old, is at the heart of the video from BBC Midlands, which posted footage of the girl wearing her new prosthetic leg at her school in Birmingham, England, for the first time, in a version of show-and-tell on the playground.

"Look what happened when she showed her friends her new sports blade," BBC Midlands said in a tweet that was liked thousands of times. "It's just gorgeous!"

"Is that your new pink leg?" one girl can be heard asking Anu in the video, as kids gather around her. Anu's friends give the girl hugs, and she's the center of attention. But within seconds, she's off and running with her schoolmates.

"I'm not crying, it's just allergies," reads the most popular reply to the posting.

"It makes me run faster and do my street dancing faster," Anu tells BBC Midlands, describing the prosthetic blade that was customized for her.

"My favorite color's pink," Anu told the network — and because a child is allowed more than one opinion, she added, "but violet is my favorite color, too."

Anu has grown up using a regular prosthetic leg — her right leg had to be amputated shortly after she was born because her umbilical cord had wrapped tightly around her leg and cut off blood circulation, according to the Birmingham health foundation that worked with her.

But Anu — short for Anupurba — has survived and thrived, going from being on a respirator to help her heart and lungs to dancing and running with her school friends.

"We've never had such a wonderful reaction to something we've filmed," BBC Midlands said in an update via Facebook, adding that it has received hundreds of messages about Anu.

One of those reactions came from Rozanne Brown, who wrote, "Kids give me hope!! This is beautiful." She added, "We could really learn from them."

The BBC spent time with Anu and her family as it reported on Britain's program to aid children who need prosthetic limbs to pursue sports. The National Health Service got a grant of some $2 million for that effort after last summer's Paralympics, but the money was split between research efforts and the "active limbs" program, and further funding is in doubt.

The cost of a new prosthetic leg can range from around $5,000 to tens of thousands of dollars, according to the Hospital for Special Surgery in New York, which specializes in orthopedic surgery.

While some prostheses can last 2-5 years or longer when worn by adults, children "need a change of socket every year to accord with their growing bodies," according to the Comprehensive Prosthetics and Orthotics group in Illinois.