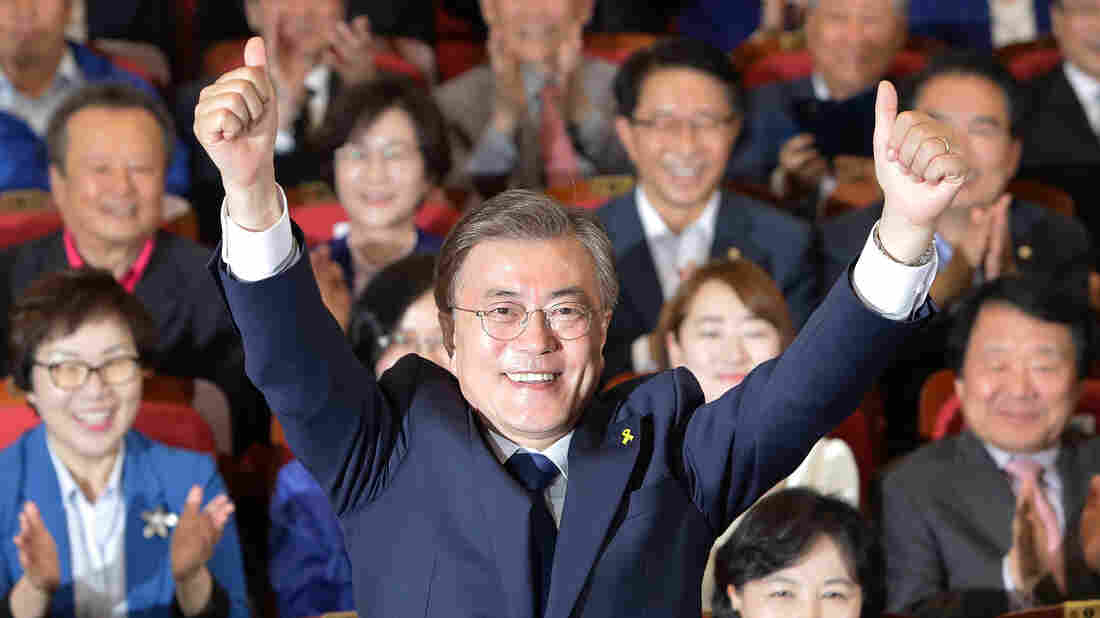 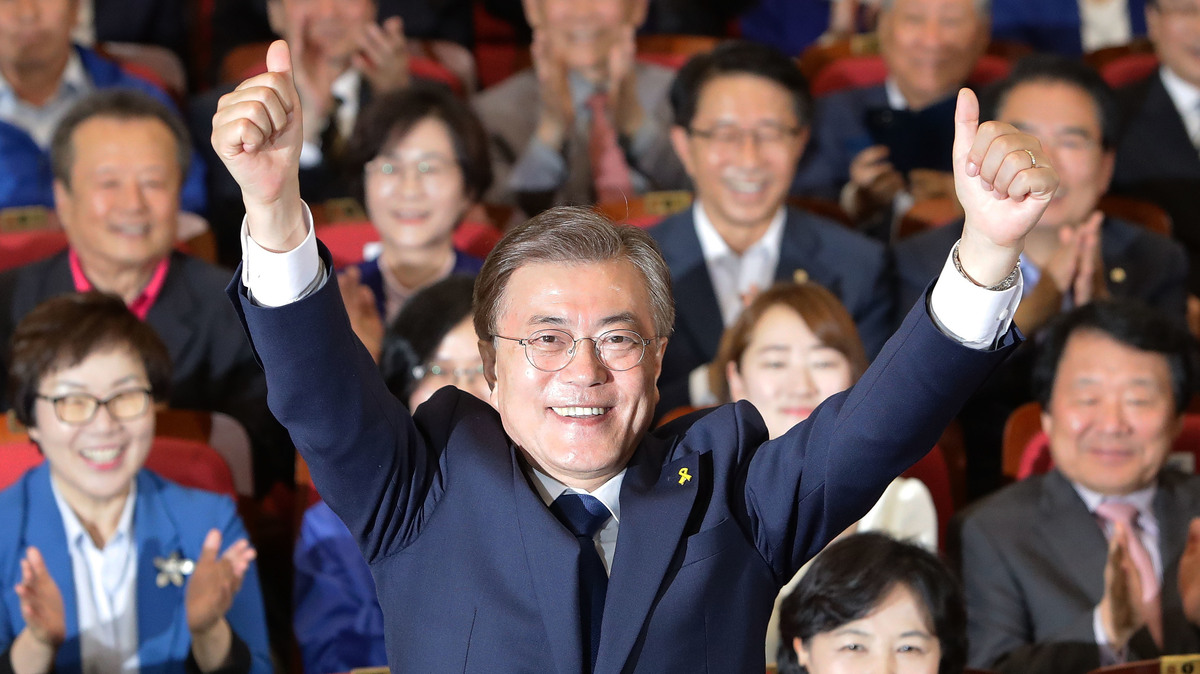 South Korean presidential candidate Moon Jae-in of the Democratic Party of Korea reacts to exit polls suggesting his victory, in the National Assembly in Seoul, South Korea, on Tuesday.

A liberal human rights lawyer born to North Korean refugees has won South Korea's presidential election with a promise to improve the economy and hold talks with the nuclear-armed North.

Moon Jae-in, 64, of the Democratic Party, is a former student protester, special forces soldier and presidential aide. He has promised to add public sector jobs, engage Pyongyang in dialogue and rethink South Korea's close relations with the United States.

Moon had a strong lead of more than 41 percent of the vote among a field of 13 candidates, according to unofficial exit polls conducted by South Korean media.

His closest contenders — a far-right conservative and a centrist — have conceded defeat.

Moon is most closely associated with the left-wing politics of another South Korean president, Roh Moo-hyun, who served from 2003 to 2008 and committed suicide in 2009 amid a family corruption scandal. Moon was Roh's chief of staff, law partner and best friend and is expected to revive his so-called Sunshine Policy of dialogue and economic aid to North Korea.

Moon's victory was in a special by-election to replace former President Park Geun-hye, who was impeached late last year and removed from office in March. Last week, she went on trial in Seoul for corruption; if convicted, she could spend life in prison. The head of the country's largest conglomerate, Samsung, has also been indicted.

"I want the next president to make sure Park faces punishment," said accountant Kim Il-young, 26, outside a polling station Tuesday in Seoul. "Politicians, even if they're convicted, sometimes get pardoned easily and are punished much less severely than average citizens."

Once official results confirm his win, Moon is expected to make a victory speech in a central district of Seoul that has been the makeshift base for protesters calling for Park's ouster. Throughout his campaign, Moon has spoken figuratively of moving the base of power out of South Korea's version of the White House and into those squares where protesters gathered.

While campaigning, several presidential candidates said they would consider pardoning Park, but Moon has said he refuses to do so. He lost the 2012 presidential election to Park but got support in this election from her critics, many of them younger voters.

Under Moon, South Korea is expected to reach out to North Korea, but analysts warn not to expect immediate talks.

"He will push for an inter-Korean summit meeting, but this will only come after a meeting with President Trump," says political scientist Kim Hong-guk, a professor at South Korea's Kyonggi University. "At this point, communication between the two Koreas is completely cut off, which is why he would focus on improving the situation and gathering momentum, such as discussing ways to reopen the Kaesong industrial complex."

That's a joint industrial facility where tens of thousands of North and South Koreans work together just north of the Demilitarized Zone that separates the two countries. It has been closed for more than a year. Moon has proposed reopening it.

North Korea, for its part, called on the eve of the South Korean election for an "end to conflict" between the two Koreas and the start of "a new era of reunification."