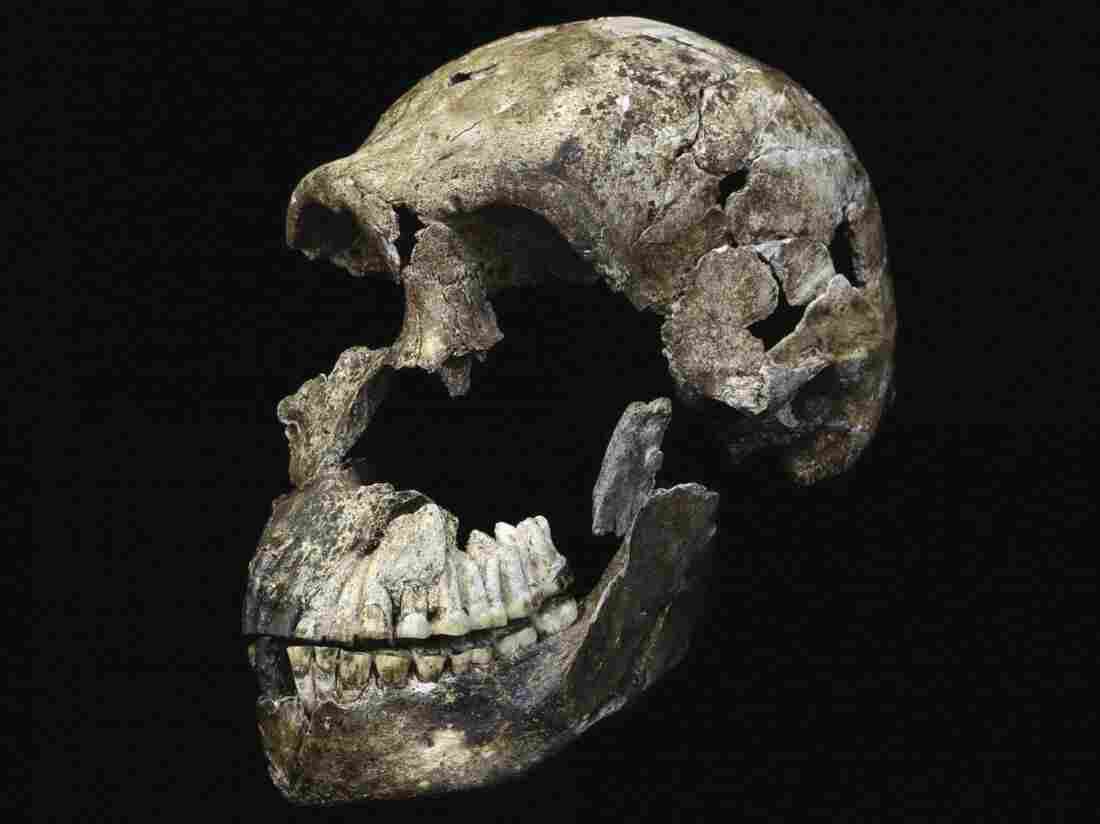 This is a skull of Homo naledi from the Rising Star cave system in South Africa. Wits University/John Hawks hide caption 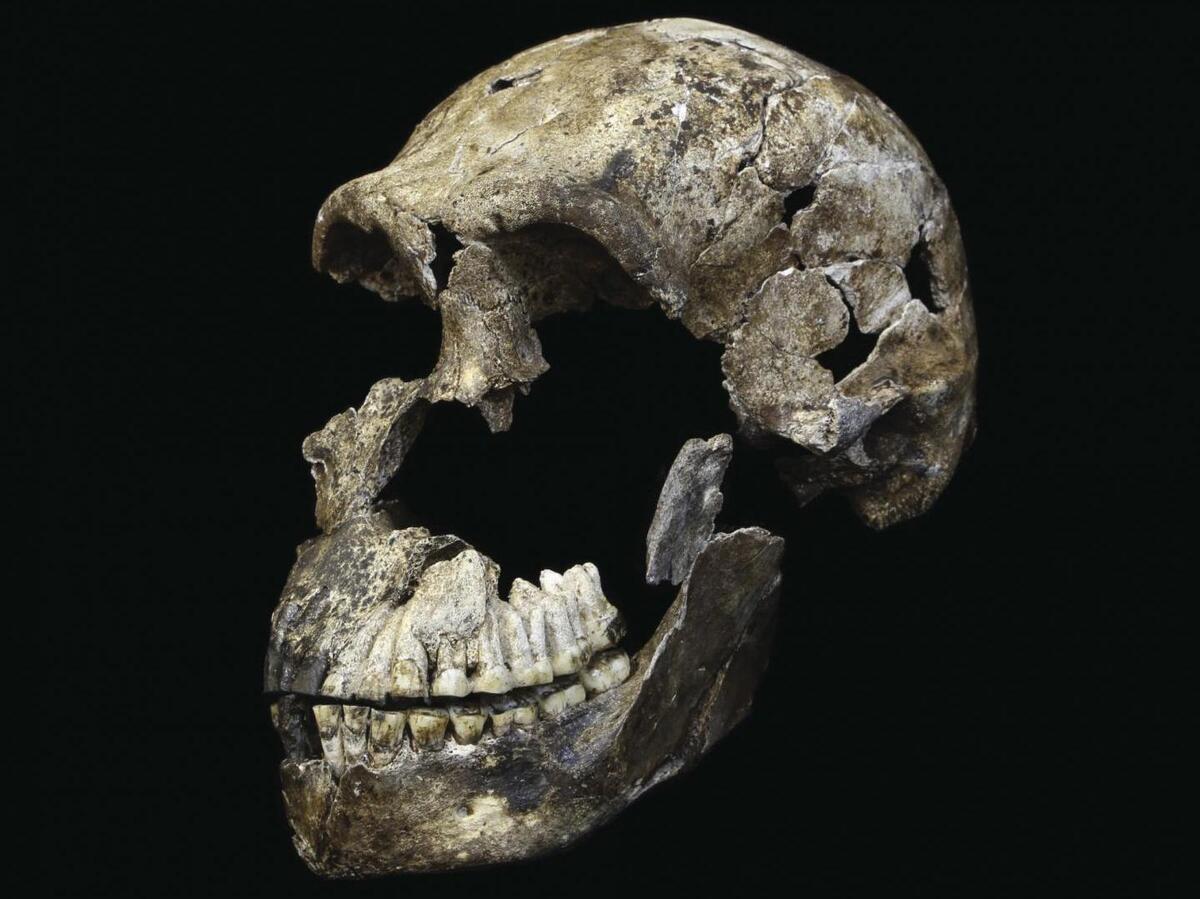 This is a skull of Homo naledi from the Rising Star cave system in South Africa.

The bones of a humanlike creature have puzzled scientists ever since they were found in a South African cave in 2013.

Homo naledi is primitive in some ways, with a small brain and other physical features reminiscent of our early ancestors. But it also walked upright, and had hands that may have been capable of making tools.

This perplexing combination of features raised questions about when the animal walked the Earth. But in new research published Tuesday in eLife, scientists have come to the conclusion that it lived between 335,000 and 236,000 years ago. That's only about a tenth of the age some experts previously predicted.

It suggests that this humanlike creature may have lived alongside early humans, or Homo sapiens. "It's a much more complex picture of human evolution that is rising," lead author Paul Dirks of James Cook University and the University of Witwatersrand tells The Two-Way.

Dirks says that the research team wanted to be absolutely certain about the surprising finding before releasing it. "So we took our time, I must say," he says. "We did six different techniques side by side to make sure that things were consistent. For the most important techniques, we did double-blind dating, so we had independent labs dating the same materials twice, sometimes three times to make sure the things could be reproduced and corroborated between different labs."

Richard Potts, the director of Smithsonian's Human Origins Program, who was not involved in the research, tells NPR that he finds the dating methodology to be sound and describes the conclusion as "reasonable and cautious."

The research team also announced today that it has discovered a new chamber containing additional Homo naledi fossils in the Rising Star cave system, where the first specimens were found four years ago. 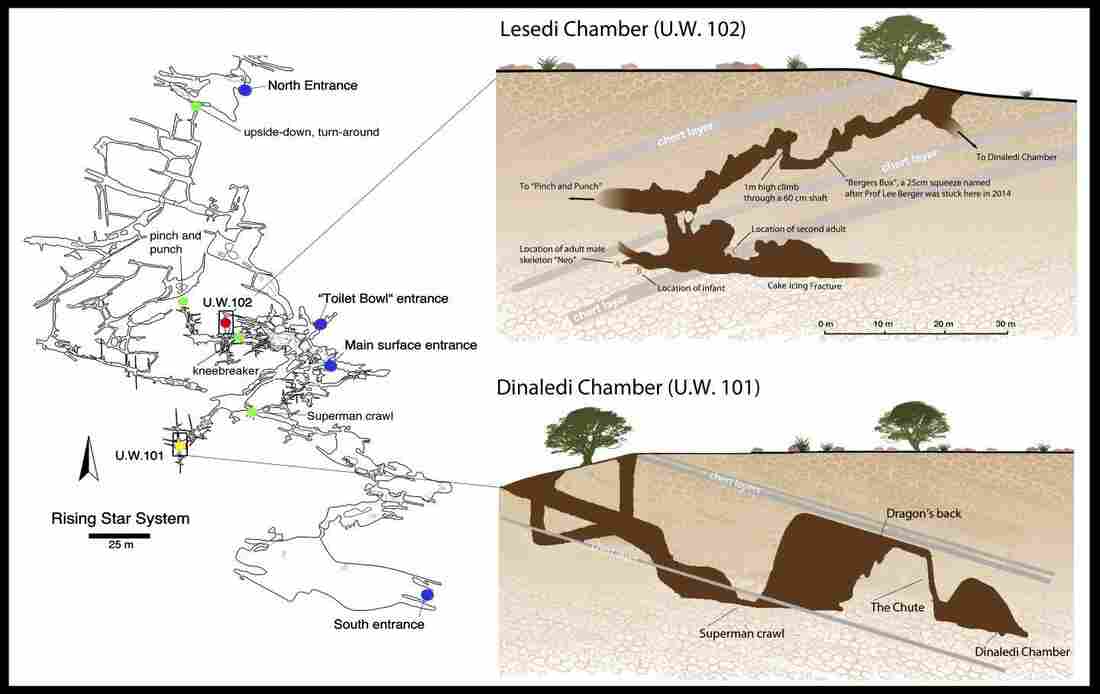 A schematic of the Rising Star cave system, where the Homo naledi fossils were found. Marina Elliott/Wits University hide caption

Homo naledi's age and other recent discoveries complicate previous ideas of how humans evolved. "Traditionally, not all that long ago, human evolution was pretty much viewed as a linear sort of progression towards larger-brained animals," Dirks says.

But the finding that this creature is young enough to have lived alongside early humans means "the whole evolutionary process may have happened slightly differently than a simply linear process," he says. "There may have been a number of different species evolving side by side."

This raises interesting questions about how the two species may have interacted, and whether tools previously attributed to early humans may have actually been created by Homo naledi, Dirks says:

"On the African landscape, there's lots of stone tools and stone tool industries. And the time period that we've now dated the Homo naledi fossils at coincides more or less with the start of the Middle Stone Age, which is a more advanced stone tool industry. Now traditionally, Middle Stone age tools have all been attributed to ... the immediate ancestors of Homo sapiens."

That conclusion is "less clear and less certain now," he says.

It's a controversial suggestion. Potts calls it a "nonstarter," pointing out that no evidence of tools has been found with the Homo naledi remains. "There's nothing about naledi that implies it was the originator of that novel way of life." He says that he thinks a likely explanation for the creature is that it actually "evolved and persisted isolated" from other relatives of humans.

And yet another mystery: How did the bones end up in these caves at all, and why? One extremely controversial suggestion is that it was part of a burial ritual. "There are other possibilities as well," says Dirks, and he says sorting out the history of these caves will be a "formidable task."