Accessibility links
WATCH: Education Secretary Betsy DeVos Speaks Over Torrent Of Boos During Bethune-Cookman Speech : The Two-Way The lightning-rod secretary of education delivered her commencement address to the historically black university despite turned backs and loud shouts of "go home" from some graduates in the crowd. 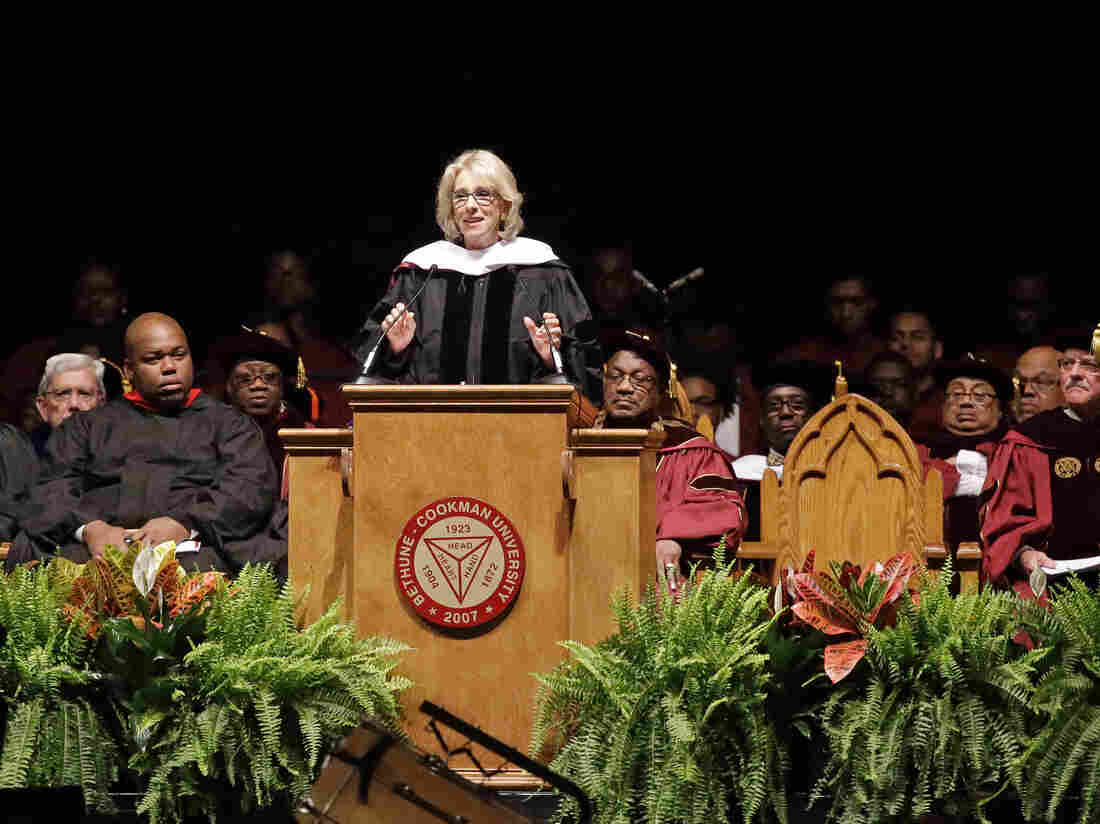 Education Secretary Betsy DeVos speaks to graduates at Bethune-Cookman University on Wednesday in Daytona Beach, Fla. For much of the address, she struggled to speak over boos and shouts from the crowd. John Raoux/AP hide caption 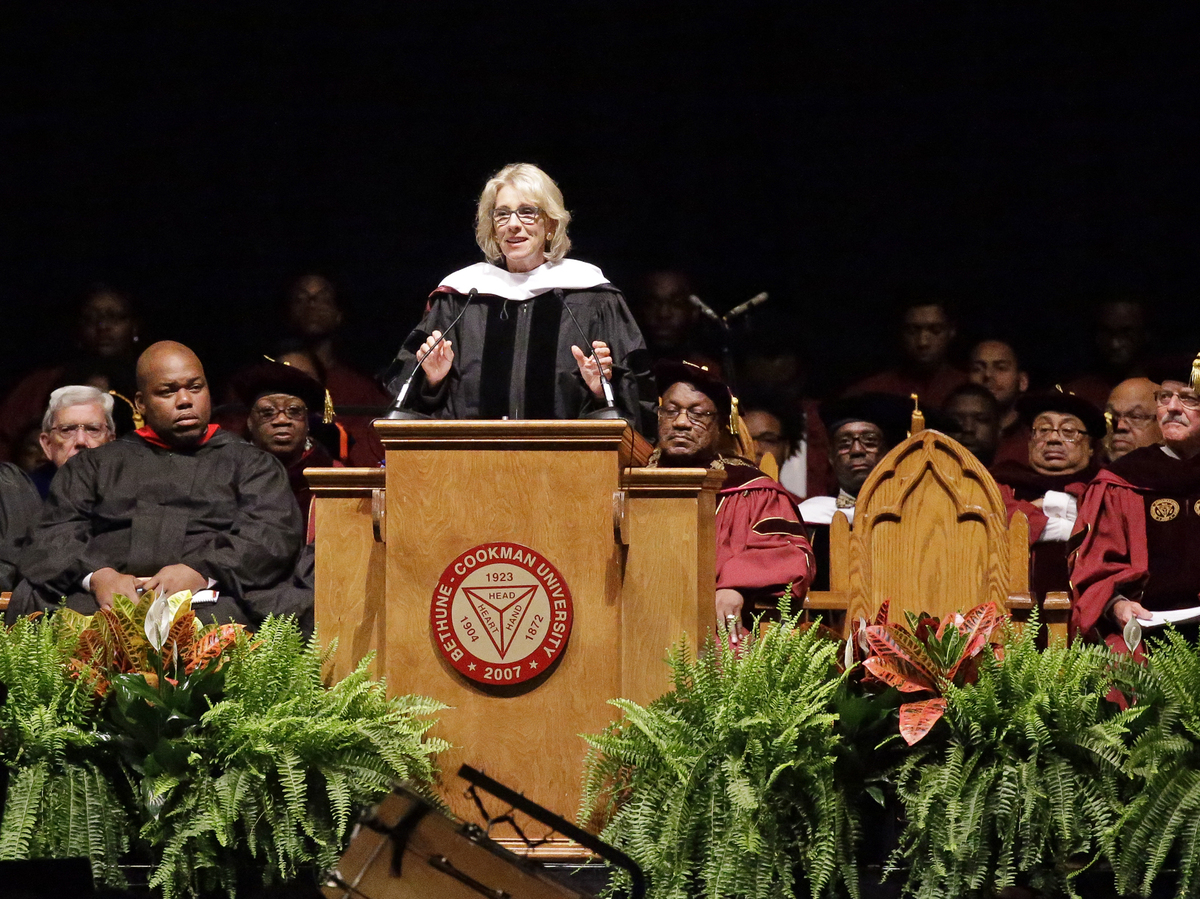 Education Secretary Betsy DeVos speaks to graduates at Bethune-Cookman University on Wednesday in Daytona Beach, Fla. For much of the address, she struggled to speak over boos and shouts from the crowd.

Betsy DeVos spoke through waves of boos and shouted protests during her commencement speech at Bethune-Cookman University on Wednesday, delivering a celebratory address with what seemed at times to be grim-faced resolve.

In the week and a half since the historically black university announced DeVos would be delivering the address, protest petitions drew thousands of signatures and calls for the school president's resignation have cropped up — as NPR's Anya Kamenetz laid out here.

The reaction to the speech itself — which you can watch below — was often no different.

As the lightning-rod secretary of education stepped behind the lectern, she was greeted with immediate boos from the students — a deepening roar that had begun in smatters minutes earlier when she received her honorary doctorate from school President Edison O. Jackson.

Yet it was also clear DeVos had anticipated this response, opening her speech with a call for understanding.

"One of the hallmarks of higher education and of democracy is the ability to converse with people with whom we disagree," DeVos told the crowd, her voice raised slightly to be heard above the boos. "We can focus on differences that divide us, or we can choose to listen and learn from each other's experiences."

Jackson: "Our next candidate for an honorary doctorate is the honorary Betsy DeVos"

As Anya explained, much of that anger among students and alumni was inspired by comments DeVos had made earlier this year:

"DeVos called HBCUs "real pioneers when it comes to school choice," a remark she was forced to walk back after protests; in fact, these colleges were founded as the only option for students, when other colleges were still legally segregated. Just this week, DeVos found herself clarifying comments by President Trump that seemed to suggest that a key form of funding for HBCUs might be unconstitutional."

Within hours of the announcement at the start of this month, the school in Daytona Beach, Fla., began actively defending its decision to invite DeVos.

"One of the lasting hallmarks of higher education is its willingness to engage, explore, and experience that which we deem as 'other,' " Jackson said in an open letter to the school community the same day as the announcement.

"When we seek to shelter our students and campus communities from views that are diametrically opposed to their own," he continued, "we actually leave our students far less capable of combating those ideas. ... We cannot, and we will not, ever accomplish this if we continue to exist in ideological, social, and racial silos."

At the ceremony Wednesday, Jackson interrupted DeVos shortly into her address in order to quiet graduates in the crowd, some of whom had risen to their feet to turn their backs on DeVos in protest. 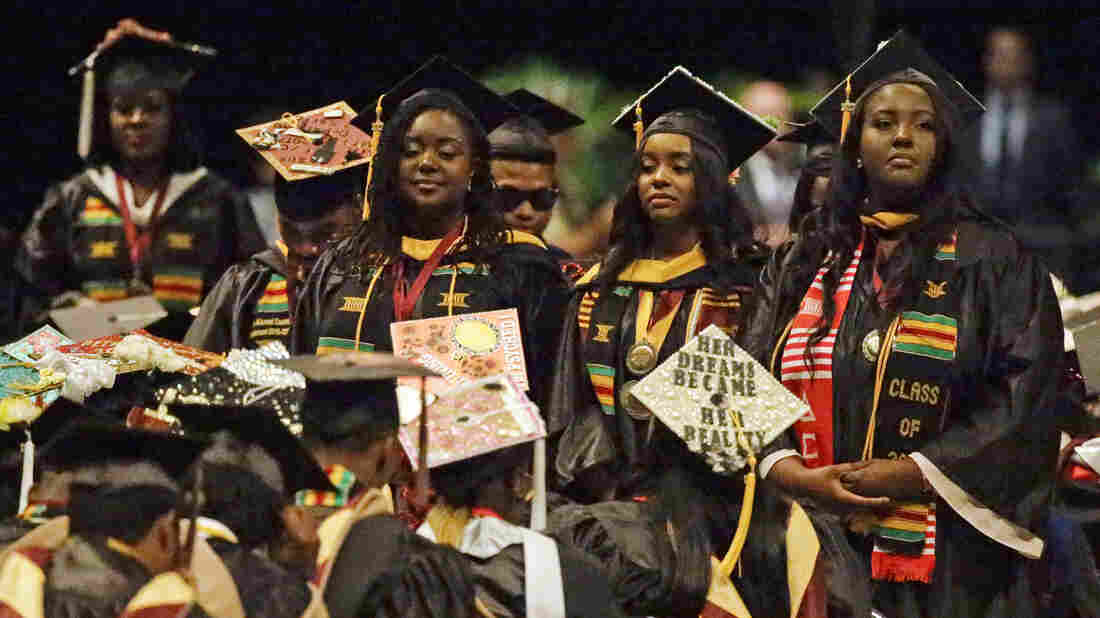 Students stand and turn their backs on DeVos during her commencement speech at Bethune-Cookman on Wednesday. John Raoux/AP hide caption 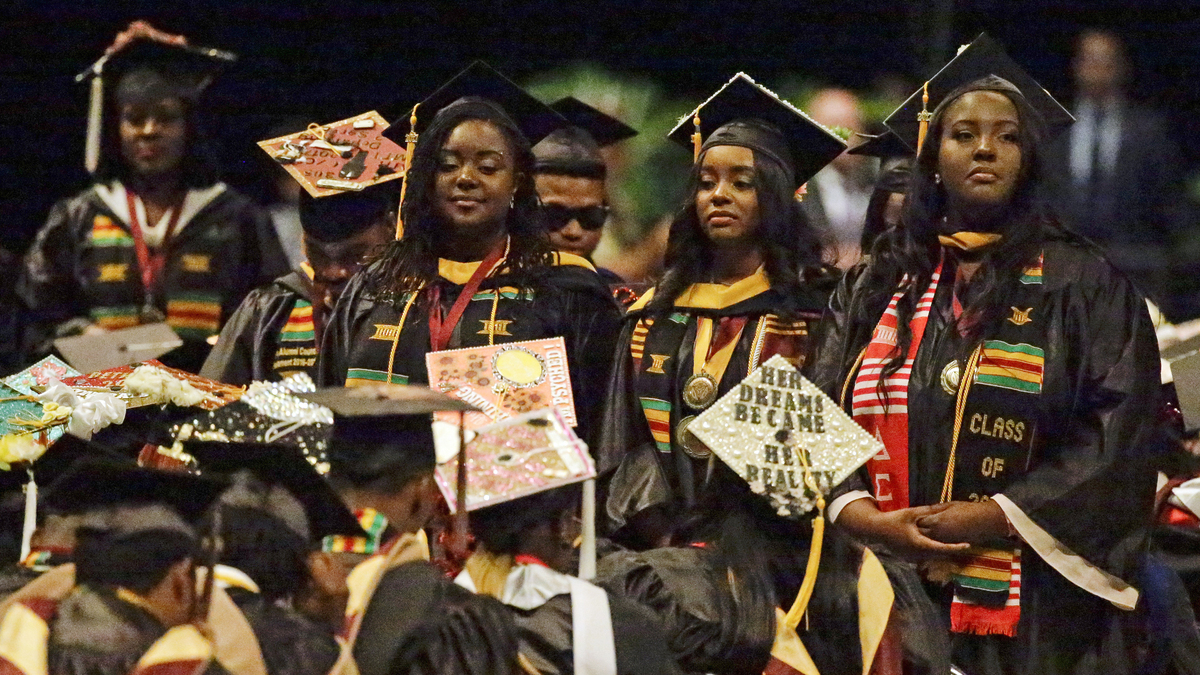 Students stand and turn their backs on DeVos during her commencement speech at Bethune-Cookman on Wednesday.

"If this behavior continues, your degrees will be mailed to you," Jackson threatened. "Choose which way you want to go."

The faculty and staff on stage stood several minutes in silence before the jeers from the crowd had ebbed enough to proceed.

Still, some of the graduates made their choice known — loudly. Perhaps no louder than when DeVos promised to go to the grave site of Mary McLeod Bethune later in the day to pay her respects, a promise nearly drowned out by the sounds of shouting.

In the end, though, the boos gradually subsided and DeVos concluded her prepared remarks — though not before she delivered a few more pointed comments on difference and understanding.

"We must first listen, then speak, with humility to understand the perspectives of those with whom we disagree."