Accessibility links
Jefferson Davis Statue Gone From Its Pedestal In New Orleans : The Two-Way Mayor Mitch Landrieu and his allies say monuments to Confederate-era figures celebrate the "cult of the Lost Cause" and hold the city back. 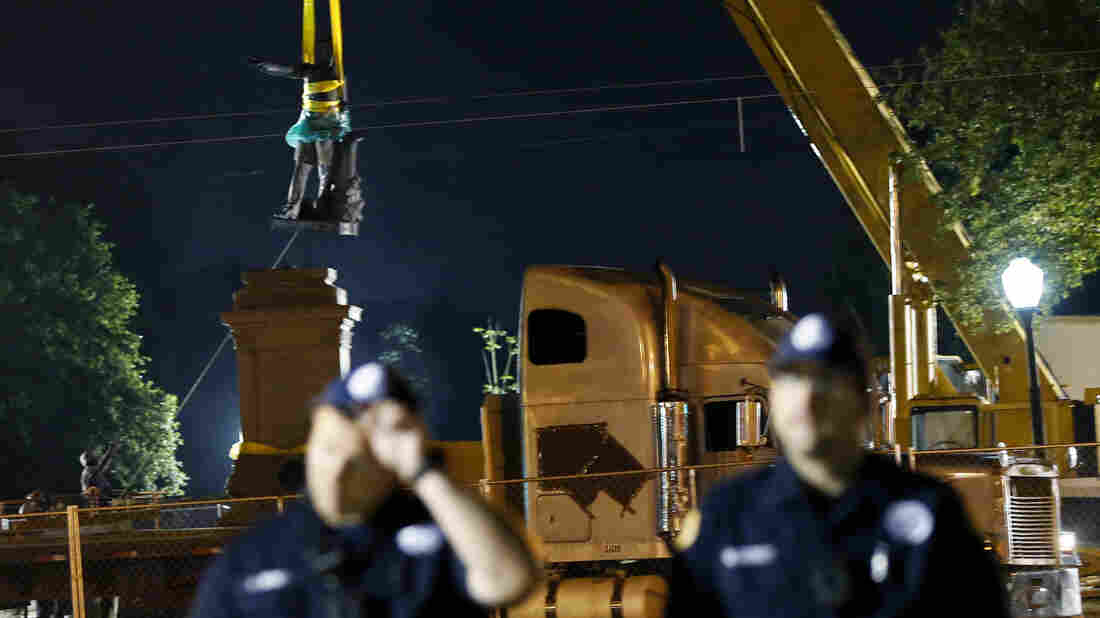 The statue of Jefferson Davis is removed from its base in New Orleans as police officers stand watch early Thursday. Demonstrators both for and against the removal of Confederate-era statues had gathered at the site. Gerald Herbert/AP hide caption 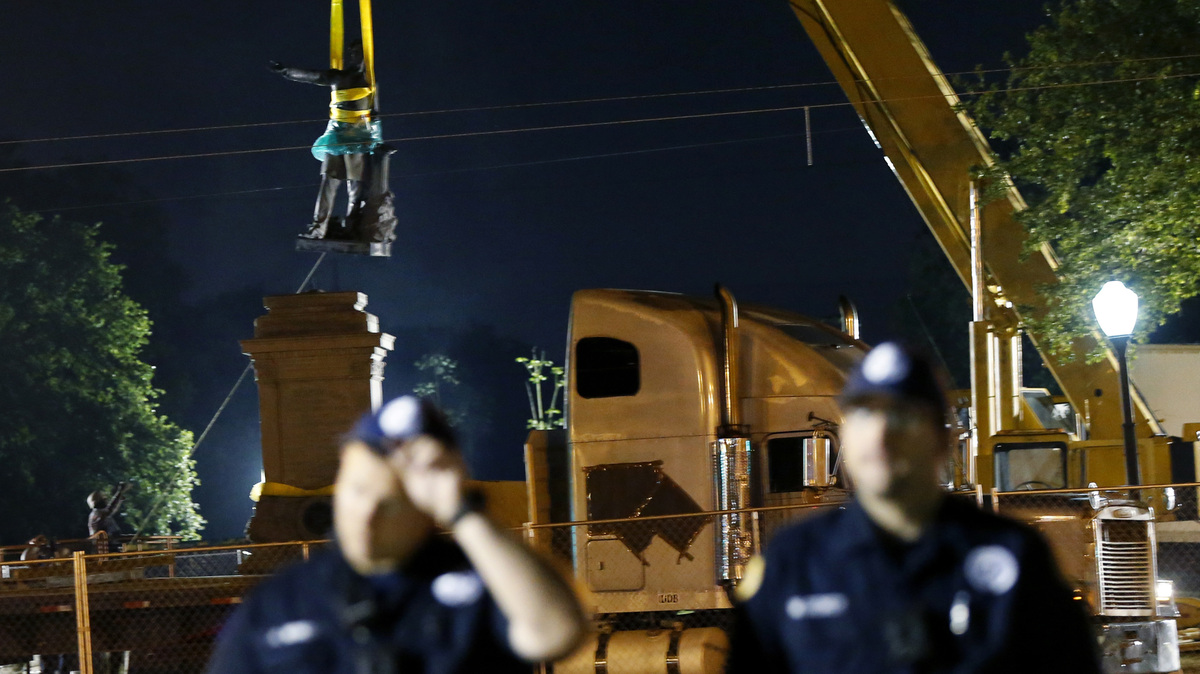 The statue of Jefferson Davis is removed from its base in New Orleans as police officers stand watch early Thursday. Demonstrators both for and against the removal of Confederate-era statues had gathered at the site.

Workers in New Orleans dismantled the city's Jefferson Davis monument early Thursday, removing the prominent statue of the Confederate leader that had stood for more than 100 years.

"This historic moment is an opportunity to join together as one city and redefine our future," Mayor Mitch Landrieu said as he announced that crews had begun removing the statue, the second of four planned removals of Confederacy-related monuments.

As workers slung a strap around the statue's waist and lifted it off its pedestal, "at least 100 people cheered from across the street, outnumbering the few dozen protesters, some waving Confederate flags," member station WWNO's Laine Kaplan-Levenson reported.

"We would have preferred it to be in the daytime," monument opponent Malcolm Suber told Kaplan-Levenson, "so everybody could see it in the light of day. But we'll take this."

This historic moment is an opportunity to join together as one city and redefine our future. #Nola pic.twitter.com/BreiED5ds4

Like an earlier removal, this one was performed in the dark because, Kaplan-Levenson said, of "death threats against city officials and contractors."

Before the monument could be removed, police had to clear the immediate area of demonstrators — both supporters of the monuments and those who want them taken away. Barricades were used to keep the sides separated, NOLA.com reported. The news outlet said chants by monument supporters included "Where's Mitch?" while opponents chanted, "Hey hey, ho ho, white supremacy has got to go."

Legal fights over the statues have slowed the removal of the monuments, but a federal appeals court said in March that the city could remove them. The New Orleans City Council endorsed the plan in December 2015, as member station WWNO has reported.

The first to go was the Battle of Liberty Place monument, which commemorated not a Civil War clash, but a white supremacist-led insurrection during Reconstruction.

The remaining two monuments honor Gens. Robert E. Lee and P.G.T. Beauregard, and like the Davis statue, they're in prominent spots. The Davis monument stood at the intersection of the parkway that bears his name and Canal Street. Lee's is in Lee Circle, and Beauregard's is at the entrance to City Park.

The inscription on the Davis statue reads, "His name is enshrined in the hearts of the people for whom he suffered, and his deeds are forever wedded to immortality." But Landrieu and his allies say the monument and others like it are holding New Orleans back by celebrating the "cult of the Lost Cause," referring to the Confederacy's deadly and doomed fight against the Union.

From the mayor's statement released Thursday:

"These monuments have stood not as historic or educational markers of our legacy of slavery and segregation, but in celebration of it. I believe we must remember all of our history, but we need not revere it. To literally put the Confederacy on a pedestal in some of our most prominent public places is not only an inaccurate reflection of our past, it is an affront to our present, and a bad prescription for our future. We should not be afraid to confront and reconcile our past."

Those who want the monuments to remain include the Sons of Confederate Veterans, which has urged its members and supporters to hold vigils at the statues to prevent their removal. Earlier this month, the group's chaplain urged members to write their state legislators in support of a bill that forbids removing Confederate monuments, saying a "war on Southern heritage is raging."

Other backers of keeping the monuments include two Louisiana historic preservation groups and the Monumental Task Committee, a nonprofit that says its volunteers have "taken care of ALL New Orleans monuments for over 25 years."

Landrieu aired his plan to remove the four Confederate monuments a week after the Charleston church massacre of 2015, when nine black worshippers were killed by a white gunman who had displayed a Confederate-era flag.

As WWNO reports, the mayor's plan calls for the monuments to be put in museums.