Accessibility links
'Saturday Night Live' Brings Back 'Spicey,' Baldwin's President Trump : The Two-Way In the end, perhaps, the bar was set too high for the Saturday Night Live episode that was to follow an already baffling series of news events. 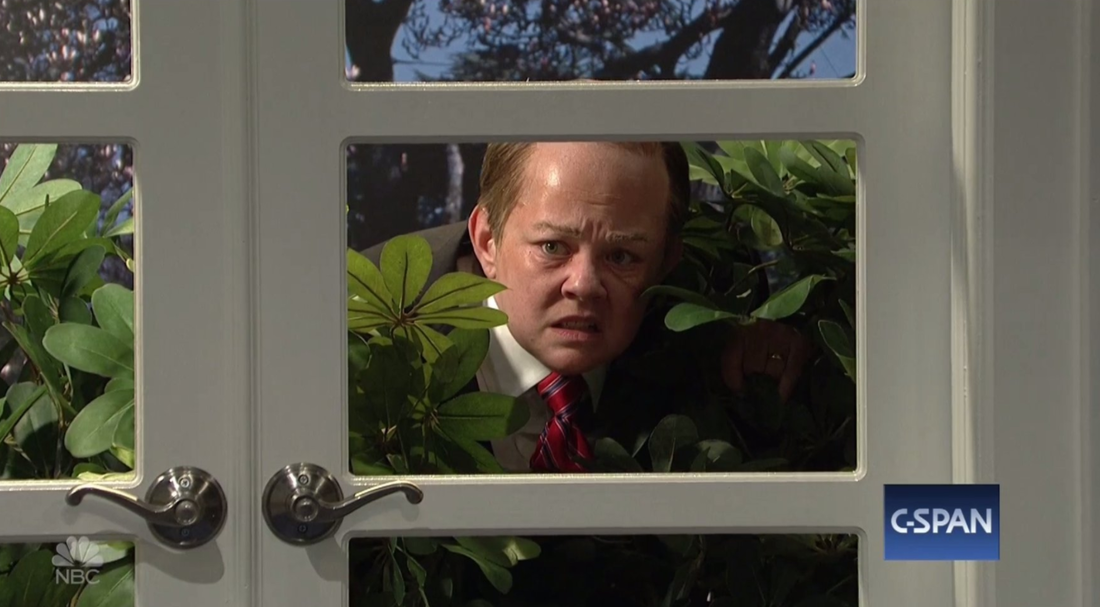 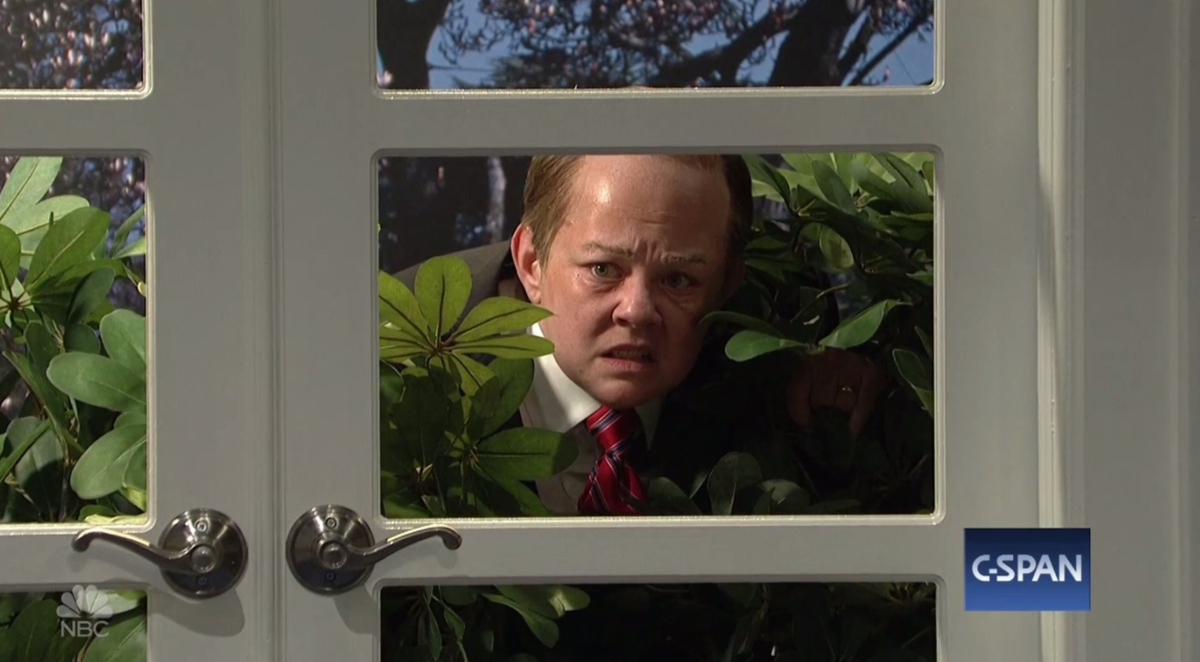 Sean Spicer is back. And so, too, is Melissa McCarthy's impression of him as the bullying, prop-wielding, obfuscating "Spicey."

Chances are, SNL was going to center on the the fan-favorite character whether or not the real Spicer returned to the lectern this week. But the fact that the press secretary made some comical headlines upon his return left no doubt about it — which only heightened hype for Saturday's show. In the end, perhaps, the bar was set too high for the sketch comedy staple, which was to follow an already bizarre series of news events.

"I know we think this every week, but this week was crazy," quips Colin Jost, to kick off Weekend Update.

You could say the show began even before it went live on Saturday. On Friday, social media captured Melissa McCarthy's Spicey — who often lifts up his lectern and uses it to intimidate reporters — rolling through Manhattan traffic via motorized lectern, yelling at cars to get out of the way. The scene was later broadcast in a pre-taped sketch Saturday night.

In the cold open, Alec Baldwin returned as President Trump in a take on a NBC Nightly News interview with Michael Che as host Lester Holt. But to Baldwin's character, he was "jazz man," "OJ" and "Tupac."

"Your staff has been saying all week that you didn't fire him because of his Russian investigation?" asks Holt, to which Trump admits he fired Comey "because of Russia."

"Wait so, did I get him? Is this all over?" asks a baffled Holt. But the host then echoes a voice on the other end of his earpiece, "Oh no I didn't? Nothing matters? Absolutely nothing matters anymore?"

Holt then implores, "Are you trolling us?"

Either way, it was SNL's turn to troll the Trump administration.

"Can you just do this full time?" the press pool reporters plead. "You are articulate and charming, whereas Sean is bullish," a reporter adds. That comment sets off "Spicey," who emerges from his hiding spot in the bushes, in a re-enactment of this week's true-story narrative. The Washington Post captured the bizarre Tuesday night scene, in which "Spicer spent several minutes hidden in the darkness and among the bushes" before he emerged and agreed to take questions from reporters, so long as the cameras were off.

President Trump's surprise dismissal of Comey left the White House staff scrambling for hours to explain why. Spicer was not prepared to brief reporters. He refuted the way the Post "falsely described the situation," according to Politico. As a result, the newspaper ran an editor's note, to clarify he was not in fact "in" but "among" the shrubbery.

But in this sketch, McCarthy's character is back to torment White House reporters, taking a fire extinguisher to the "liar liar pants on fire" reporter's nether regions and hurls a pillar at another reporter.

An impatient Spicey ousts Bryant's Sanders at the lectern to reluctantly take questions, mostly batting down inquiries about Russian collusion. When words aren't enough, McCarthy turns to a Russian nesting doll to explain the White House's rank and file.

"The only Russian thing is my dolly," Spicey says, holding the biggest doll, President Trump. That's followed by "James Comey" as Jake the Dog from Cartoon Network's Adventure Time. The next doll up is Maleficent from Sleeping Beauty, presented as "Hillary Clinton." Inside Putin ("Oops," McCarthy says, swiftly tossing that doll aside), follows "Steve Bannon," or Slimer from Ghostbusters. Ultimately, Comey's firing is traced to "Trump's good friend" Jeff Sessions who's symbolized by Pikachu.

When pressed on whether Trump is lying to him, Spicer insists "he wouldn't do that, he's my friend." Driven to ease his insecurity, the press secretary leaves the briefing in search of his boss.

He rolls through Manhattan traffic via motorized lectern, promising to "talk better." His journey ends at a New Jersey golf course, where he asks Baldwin-as-Trump: "Have you ever told me to say things that aren't true?"

"Only since you started working here," Trump replies. The two share a passionate embrace before Trump says, "Sean, kiss me... I'm famous, it's OK."

"No! Is this like The Godfather where you kiss me and no one ever sees me again?" Spicer asks.

Comedians and Trump critics who've used the president as the subject of a same-sex joke have drawn accusations of homophobia — most recently, Late Show host Stephen Colbert, who alluded to the common Trump-as-Putin's-puppet criticism with a joke painting a close sexual relationship between the two world leaders.

Next week is the show's season finale, with Baldwin already locked down to play Trump. And if Sean Spicer's future as press secretary is in jeopardy, SNL fans may also see less of McCarthy.

The original version of this story said it was the first coast-to-coast live broadcast. The first live coast-to-coast broadcast was April 15. Also, White House press secretary Sean Spicer traveled via motorized lectern to a golf course in New Jersey, not in New York.