Accessibility links
Appeals Court Hears Arguments Over President Trump's Travel Ban : The Two-Way An executive order banning travel from six majority-Muslim countries has been blocked by multiple courts. A three-judge panel in Seattle heard arguments Monday over whether it should be reinstated. 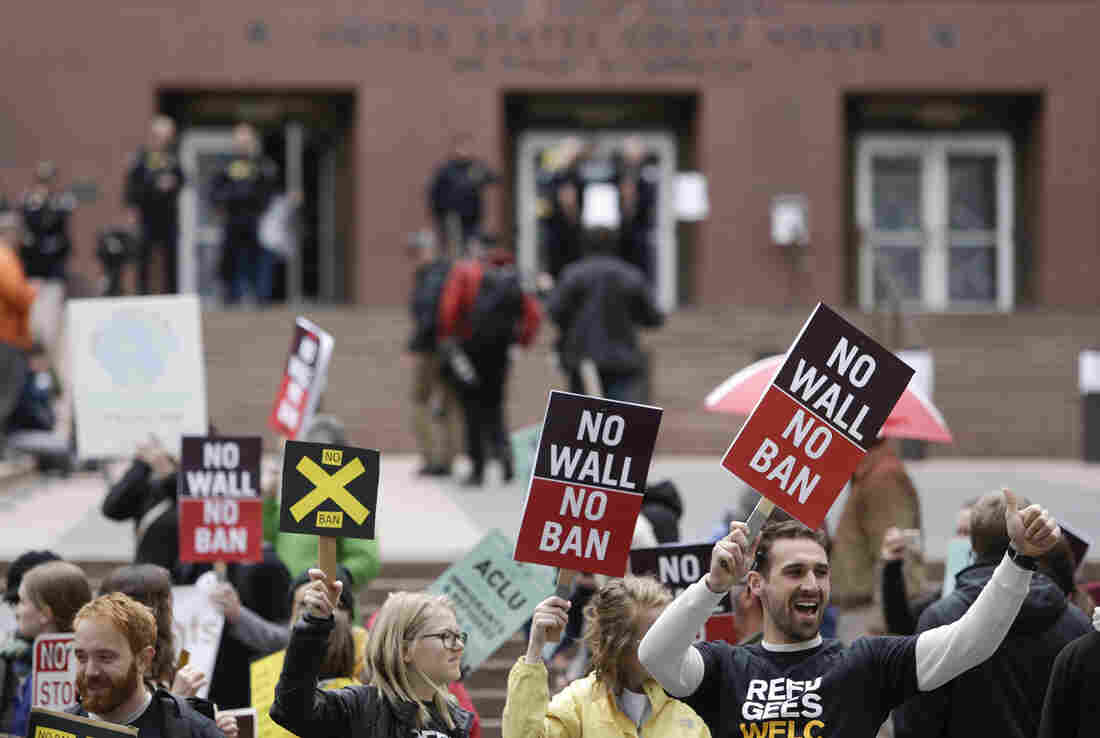 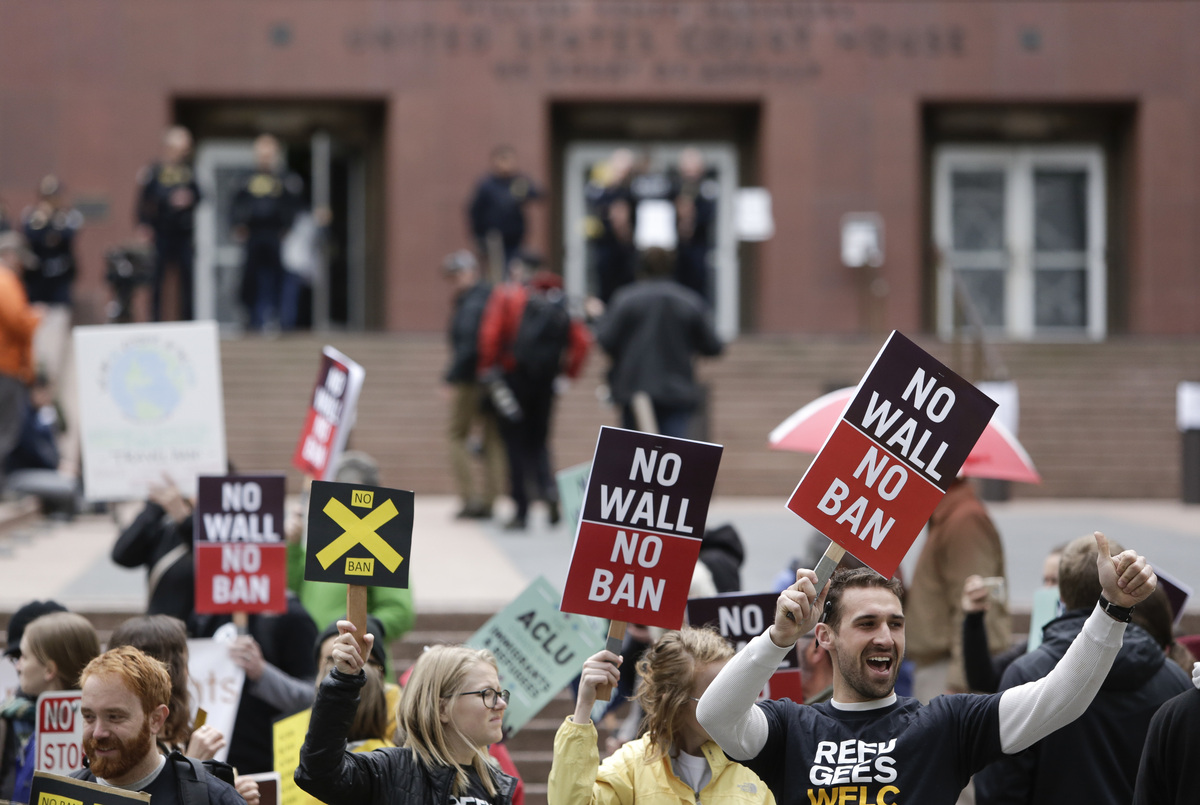 People protest outside as the 9th U.S. Circuit Court of Appeals prepares to hear arguments on President Trump's revised travel ban in Seattle on Monday.

At a Seattle courtroom on Monday, in the latest battle in the legal war over President Trump's currently suspended travel ban, lawyers and judges pushed and pulled on the swirling questions over Trump's intentions and the legal limits on executive power.

A three-judge panel of the 9th U.S. Circuit Court of Appeals heard arguments from lawyers for the U.S. government and the state of Hawaii over the executive order that would block travelers from six majority-Muslim countries.

Lawyer for Hawaii: "this is unprecedented." A president is establishing a disfavored religion, Islam, with "real consequences"

The arguments were carried live on some cable news channels. As the debate unfolded, supporters of immigrants and refugees rallied outside the Seattle courthouse, chanting and carrying "No Ban, No Wall" signs, The Associated Press reports.

In Seattle, the three judges — all appointed by Bill Clinton — threw questions at acting Solicitor General Jeffrey Wall, representing the federal government, and at Neal Katyal, himself a former acting solicitor general who is now representing Hawaii.

That executive order was upheld by the U.S. Supreme Court at the time. It's now nearly universally recognized as being unconstitutional and profoundly unjust, born of "race prejudice, war hysteria and a failure of political leadership," as a congressional apology put it.

Wall said that internment then, and the travel ban now, are absolutely different — and that he wouldn't be defending the executive order otherwise. But he also said he hasn't read the text of Roosevelt's order.

The justices also pushed Wall on whether President Trump has ever disavowed his campaign statements about a "Muslim ban" — statements that have loomed large in the legal conflicts over this executive order (which is a revised version of an earlier, chaos-inducing order that referenced religion.)

Wall said the president has clarified his remarks.

Katyal, when it was his turn to speak, said Wall "could not actually point to any disavowal" because "there is no such statement."

The judges on the panel pressed Katyal about arguments he had made before the court back when he was responsible for representing the federal government. They pointed out that he argued the president has broad authority when it comes to immigration.

And we're done. In closing, both lawyers say the case has big implications for future POTUS decisions -- but disagree on what those are

"Katyal said he stands by those arguments, but that doesn't mean the president's authority is unbounded," the AP reports.

"In closing, both lawyers say the case has big implications for future POTUS decisions — but disagree on what those are," reports NPR's Joel Rose, who was in the courtroom.

It's not clear when the judges will rule. It's widely expected that one of the pending lawsuits will, eventually, be appealed to the Supreme Court.