Accessibility links
Violence Erupts During Protest At Turkish Ambassador's Residence In Washington, D.C. : The Two-Way Nine people were injured and two arrests were made on Tuesday during an altercation, authorities say. 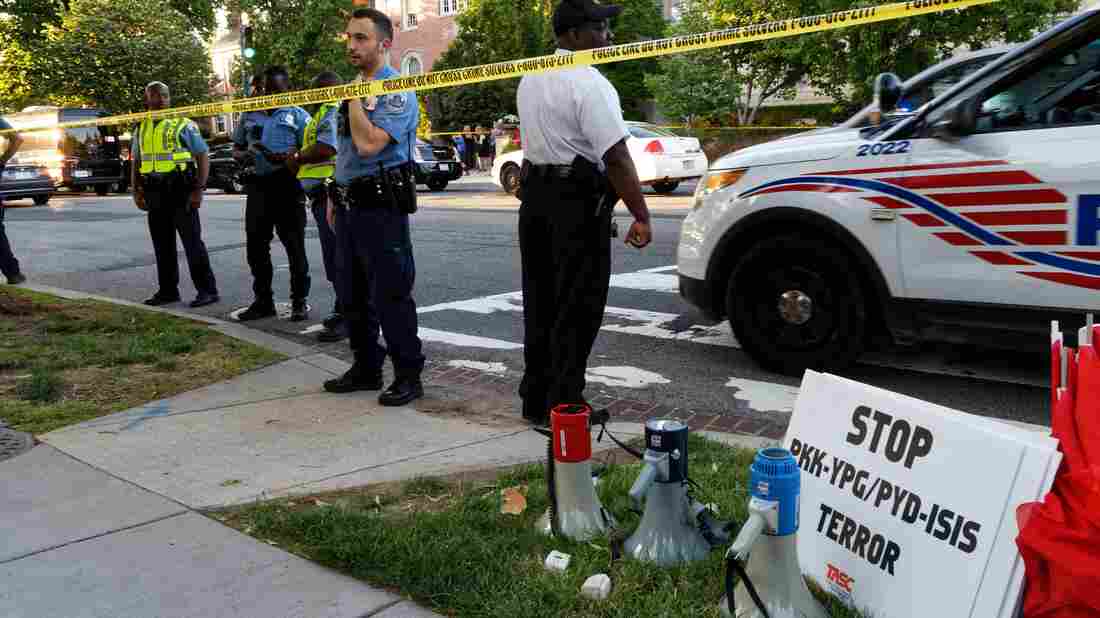 Police secure the street outside the Turkish Embassy in Washington, D.C, on Tuesday. Nine people were injured when a fight broke out during a demonstration outside the embassy. Turkish President Recep Tayyip Erdogan was in town to meet President Trump at the White House. Dave Clark/AFP/Getty Images hide caption 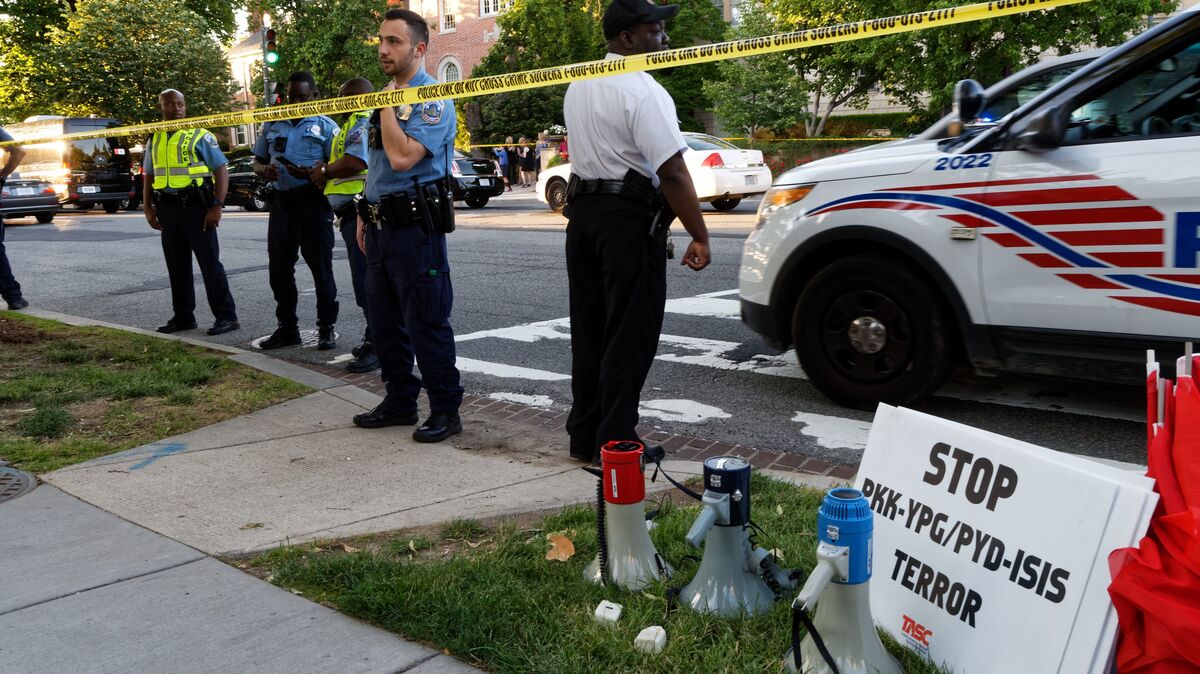 Police secure the street outside the Turkish Embassy in Washington, D.C, on Tuesday. Nine people were injured when a fight broke out during a demonstration outside the embassy. Turkish President Recep Tayyip Erdogan was in town to meet President Trump at the White House.

On the same day that Turkish President Recep Tayyip Erdogan visited President Trump at the White House, protesters were gathered outside the Turkish ambassador's residence in Washington, D.C.

During Tuesday's demonstrations, an altercation broke out and nine people were injured, two seriously, and two arrests were made.

Dustin Stenbeck, a spokesman for the Metropolitan Police Department, says the fight was between two groups.

He didn't elaborate, but did say that one of the people arrested was charged with assaulting a police officer.

CNN reports a Facebook video showed several protesters who were injured, some covered in blood:

"We are protesting (Erdogan's) policies in Turkey, in Syria and in Iraq," said Flint Arthur of Baltimore, Maryland.

"Arthur accused Erdogan supporters of breaching police lines and attacking protesters on at least three separate occasions. "They think they can engage in the same sort of suppression of protest and free speech that they engage in in Turkey," Arthur said. "They stopped us for a few minutes ... but we still stayed and continued to protest Erdogan's tyrannical regime."

The altercation outside the ambassador's residence occurred hours after the Trump-Erdogan meeting.

The Washington Post reports: "Erdogan is staying at Blair House across from the White House during his visit, and was apparently not at the embassy during the demonstration."

At their White House meeting earlier, Trump and Erdogan had nice things to say about each other — even after the U.S. decided to arm Kurdish fighters in Syria.

Miles Parks reported for The Two-Way:

"The Turkish president made it clear that the Trump administration's decision to arm one group of Syrian Kurds fighting the Islamic State will "never be accepted."

"U.S. military officials have long argued in favor of supporting the Kurds in Syria against ISIS because they are such competent soldiers. The decision to arm them came last week, amid preparation for an offensive to retake what is effectively the capital of ISIS, the city of Raqqa in northern Syria. Military officials say the Syrian Kurds are key to that mission.

"Erdogan's administration, however, considers the Syrian Kurds terrorists because of their ties to Turkish Kurds who have been waging an insurgency to create an independent state for the past three decades. The U.S. and the European Union agree with Turkey that the group of Kurds in Turkey known as the PKK are indeed terrorists, and the Trump administration has sought to ease Turkish worries that the weapons provided to Kurds in Syria would not end up in the hands of the Turkish Kurds.

Trump said Tuesday that the U.S. would ensure the PKK has "no safe quarter."

The headline on a previous version of this story incorrectly said the altercation took place outside the Turkish Embassy, rather than the ambassador's residence.