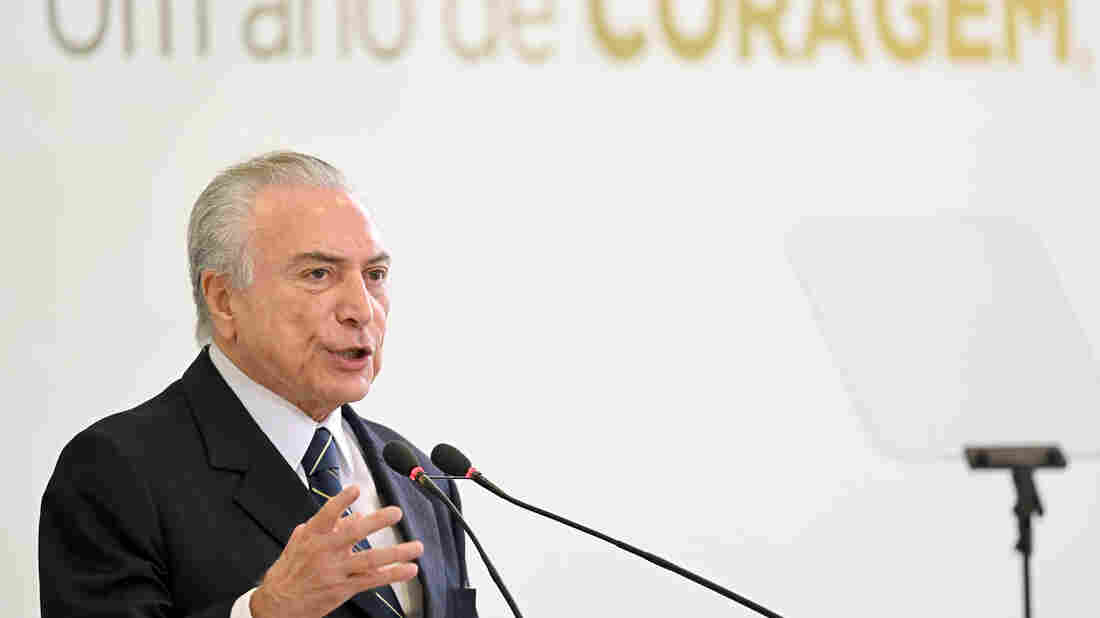 Brazilian President Michel Temer delivers a speech at the Palacio do Planalto in Brasilia, Brazil, on May 12. On Thursday he denied allegations of corruption and rejected calls for his resignation. Evaristo Sa/AFP/Getty Images hide caption

Brazilian President Michel Temer says he won't be resigning over allegations that he endorsed hush money payments to a former ally, denying the charges in an address on TV.

A major newspaper in Brazil, O Globo, is reporting that Temer was caught on tape discussing bribery payments.

Temer has been in office for just over a year. He came to power as interim president after embattled former President Dilma Rousseff was suspended and impeached on charges of financial mismanagement.

At the same time, a massive corruption scandal involving the state oil company Petrobras was unfolding. Rousseff was not directly implicated; Temer, however, was accused of participating in the graft.

The new allegations of bribery are tied to that larger political crisis.

There were reports that Temer was planning to resign over the accusations, but instead, he gave a defiant speech, NPR's Philip Reeves reports:

"Temer has weathered many crises during his short term in office, but this is by far the most serious. A leading newspaper says Temer was caught on tape endorsing payments to buy the silence of a former ally caught up in Brazil's massive 'Car Wash' corruption investigation.

"The news sent stocks into a tailspin, amid investor fears that Temer will now be unable to carry through his long plans to overhaul pension and labor laws — and pull Brazil's economy out of deep recession.

"Temer denies wrongdoing, but his political support is ebbing, and his ratings are in single figures. The latest scandal is being met with a chorus of voices calling on him to stand down, or face impeachment."

Instead, Temer said he plans to fight the charges.

"I will not resign. I know what I have done," he said, according to a BBC translation. "I never authorized any payments for someone to be silent. I did not buy anyone's silence. I fear no accusations."

The Guardian describes the accusations published in O Globo in more detail. They center on tapes that came to light through a plea bargain by brothers Joesley and Wesley Batista, businessmen in the meatpacking industry, the newspaper writes:

"Temer is alleged to have talked with Joesley about cash payments to Eduardo Cunha, the former speaker of the House who has been jailed for his role in the sprawling Petrobras corruption scandal. ...

"In covert recordings made during two conversations in March, Joesley tells Temer he is paying Cunha to keep him quiet, to which the president allegedly replies: 'You have to keep it going, OK?' "

"According to Globo, police also have audio and video evidence that Temer's aide Rocha Loures negotiated bribes worth 500,000 [reals] (US$160,000) a week for 20 years in return for helping JBS overcome a problem with the fair trade office."