Accessibility links
How The Biggest Animal On Earth Got So Big : The Two-Way Whales might be the largest animals on the planet, but they haven't always been so huge. Researchers say the ocean giants only became enormous fairly recently, and over a short period of time. 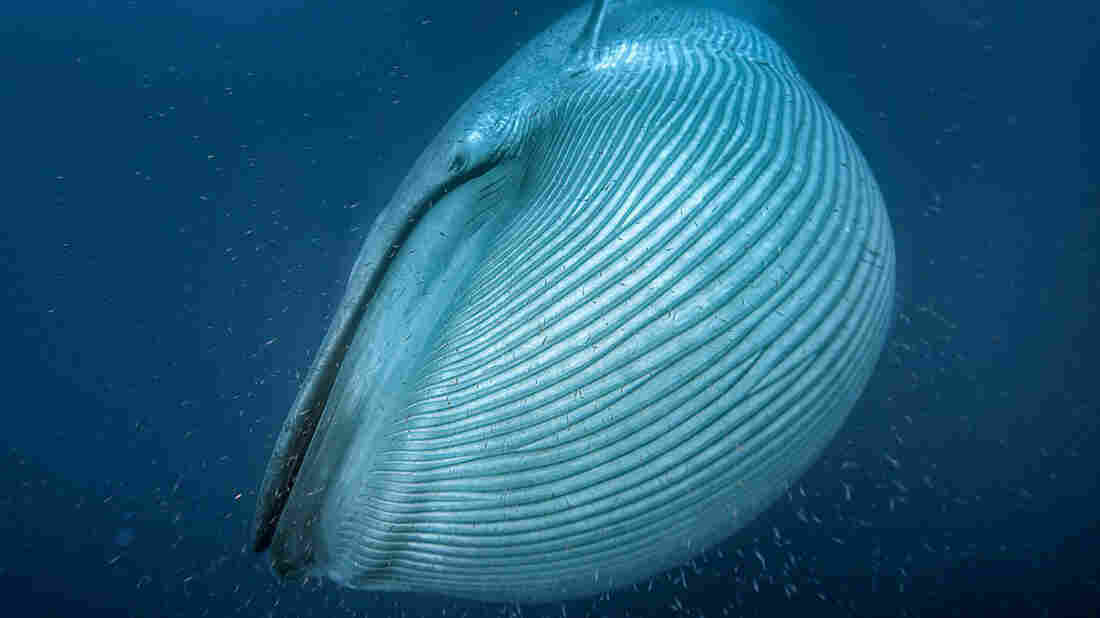 A blue whale, the largest animal on the planet, engulfs krill off the coast of California. Silverback Films/BBC/Proceedings of the Royal Society B hide caption

toggle caption
Silverback Films/BBC/Proceedings of the Royal Society B 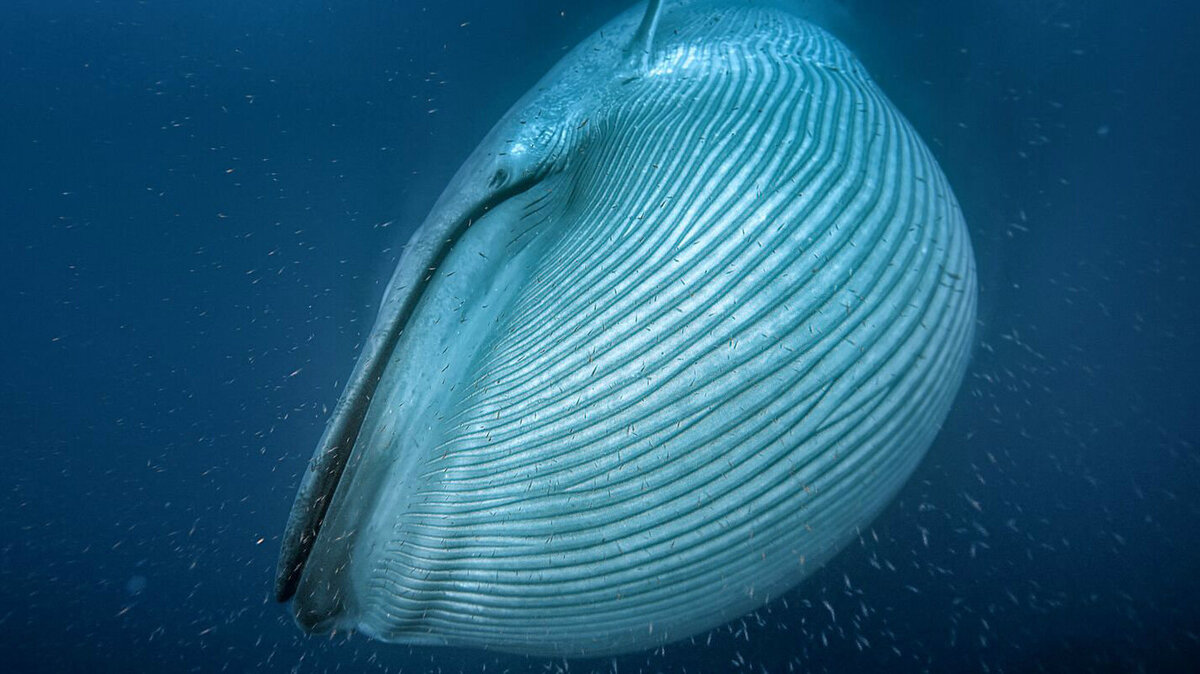 A blue whale, the largest animal on the planet, engulfs krill off the coast of California.

Silverback Films/BBC/Proceedings of the Royal Society B

Whales are the largest animals on the planet, but they haven't always been giants. Fossil records show that ancient whales were much smaller than the currently living behemoths.

So when did whales get so big, and how?

A new study suggests it might be due to changes in climate that affected the food that some whales eat: krill and small fish. Instead of being spread throughout the ocean, lots of krill started being packed into a small area. Bigger whales were simply more efficient at eating the dense pockets of krill, and they beat out their smaller cousins.

These whales use filters to feed on the tiny krill. Known as baleens, they include the largest whale on Earth — the blue whale. The baleen filter looks like bristles of a comb and is made up of keratin — the same stuff in our fingernails. To eat, the whale opens its mouth and takes in a huge gulp of water. Then it spits the water back out, and food like krill are caught in the baleen filter. It's a highly efficient way to eat, allowing whales to pack on the pounds.

But according to Stanford University researcher Jeremy Goldbogen, it can't be the only reason whales got so big. "Baleen evolved about 20 million years ago, and we didn't see the evolution of gigantism until about very recently, about 3 million to 5 million years ago."

Goldbogen's group looked back to see what was happening in the ancient oceans, and if there were any clues about what caused the massive growth spurt.

They found that around the time baleens began growing larger, the ice ages started. The researchers think changes in climate led to increased runoff and more nutrients pouring into the coasts. At the same time, there was an increase in ocean upwelling, which occurs when wind pushes surface waters off-shore and causing deeper ocean waters underneath surface waters to replace it. Those deep waters are often full of nutrients and food for the whales.

The combination of the ice ages and more upwelling resulted in dense patches of food in the ocean — setting the stage for massive whales to win out.

During upwelling, wind-displaced surface waters are replaced by cold, nutrient-rich water that "wells up" from below. NOAA hide caption

During upwelling, wind-displaced surface waters are replaced by cold, nutrient-rich water that "wells up" from below.

Think about it this way: It takes a lot of energy for a giant whale to open its giant mouth. If a lot of food is packed into a small space, those whales can swallow it up in one big gulp and it's worth all the energy it takes. But if the food is spread out and the whales have to swim around opening and closing their mouths a lot — then it's not great to be a big ol' whale.

So big whales are more efficient at eating the dense patches of food, while smaller whales might be more suited to eating food dispersed throughout the ocean.

The changes in the ocean also allowed to whales to get really big, really fast. The researchers reported in the journal Royal Society B on Tuesday, that the whales increased in body mass from 10 tons to 100 tons in just a few million years.

Although it's hard to draw a direct connection between whale size and ocean dynamics 3 million years ago, other studies support the hypothesis. "There are cases where food limitation or food production can basically control body size changes on very short time scales," Goldbogen says referring to a 2013 study published in the ICES Journal of Marine Science. Therefore, "the inference here is that if you have enough food available and very very efficient animals, that perhaps they can evolve larger and larger body sizes."

Goldbogen is more than a little excited to be studying these ocean giants. "We're totally living in a time of giants. Unlike no other time in Earth's history" he says. "We have a unique opportunity to study how the largest animals of all time function in these different ecosystems, and that's a lot of fun."

Goldbogen thinks the next question is, "Are whales still getting bigger? If we fast-forward a few million years into the future if food is not limiting, can they evolve even greater body sizes?"

We'll have to wait to find out.