Accessibility links
What Does It Mean When ISIS Claims Responsibility For An Attack? : The Two-Way When the Islamic State says its "soldiers" carried out an attack, it doesn't necessarily mean the group planned or directed the terrorist act — or even knew about it in advance. 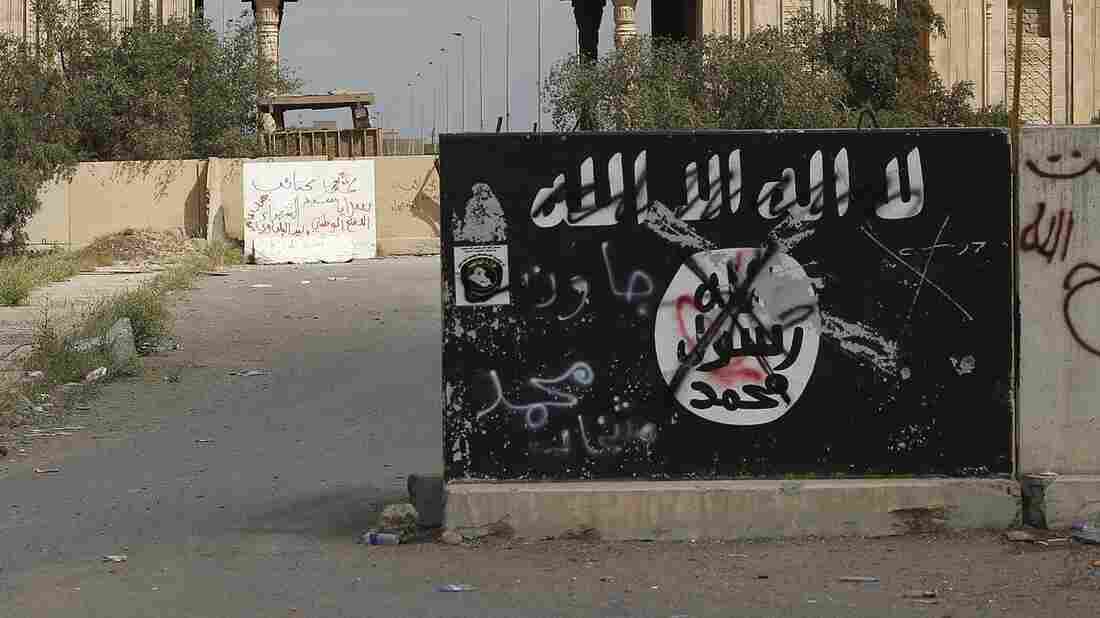 A defaced Islamic State flag is emblazoned on a wall in Tikrit, Iraq, in 2015. ISIS will generally claim responsibility for an attack within one day, though it can sometimes take longer. Mohammed Sawaf/AFP/Getty Images hide caption 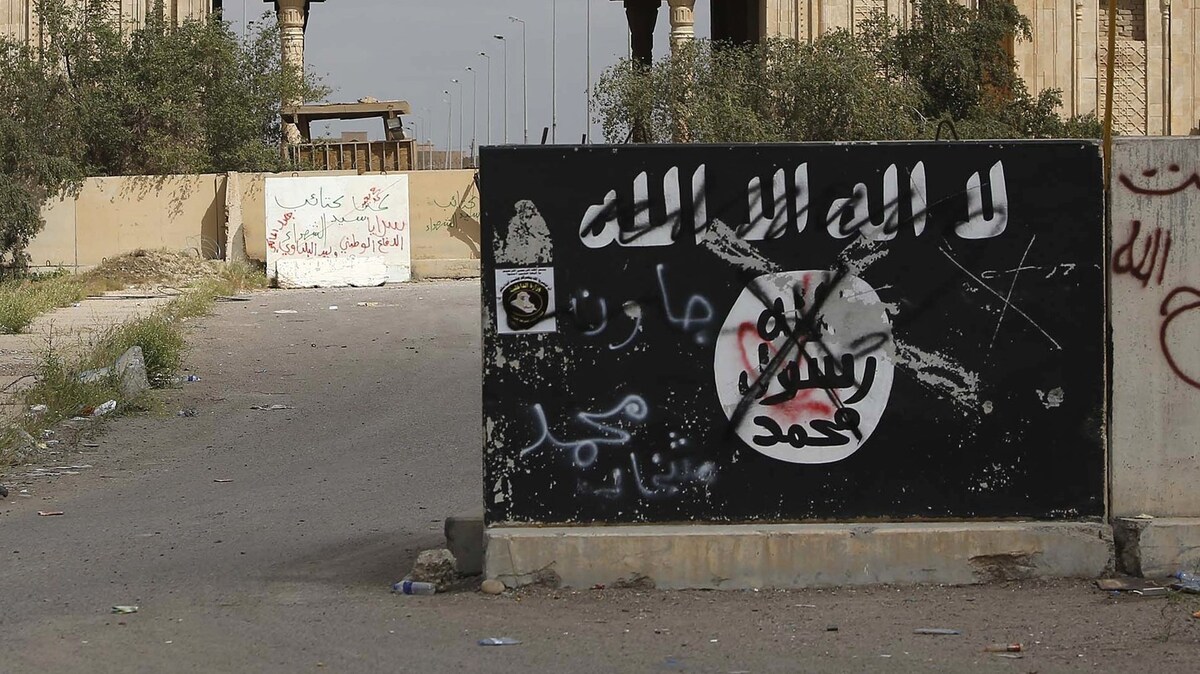 A defaced Islamic State flag is emblazoned on a wall in Tikrit, Iraq, in 2015. ISIS will generally claim responsibility for an attack within one day, though it can sometimes take longer.

It's a simple, frequently recurring phrase: "The Islamic State has claimed responsibility for the attack." But it raises some questions: Is the claim credible or just an empty assertion, and if it's true, what does "responsibility" actually entail?

Experts who closely follow the Islamic State say that in general when it comes to attacks in the West, an ISIS claim of responsibility usually means there was some sort of connection. But the attack might have been planned, funded and directed by ISIS — or it could just have been inspired by the group's propaganda.

Here's a look at where that simple sentence comes from, and what, exactly, it can mean.

ISIS, which sees itself as a state, has its own news outlet — Amaq News Agency. It "purports to be independent" but is actually an ISIS propaganda arm, said Thomas Joscelyn, senior editor of the counterterrorism publication The Long War Journal.

Amaq stories get posted on social media and the agency's website. The site has to move URLs, because it's frequently taken down.

A Mass Shooter 'Pledges Allegiance' To ISIS. What Does This Mean?

So one way to claim responsibility is for Amaq to run a story tying an attack to ISIS, citing "sources" within the Islamic State. "It's a little coy," Joscelyn said, but it amounts to a claim of responsibility by ISIS leaders.

The other route is more direct though less common: The Islamic State issues a statement itself, with no intermediary. The Nashir Media Foundation is considered the official ISIS channel, and its statements are considered to come directly from the group, said Rita Katz, the director of the SITE Intelligence Group.

"When these claims show up, it's an indication of the role that ISIS played," she said.

Katz also said she saw a flood of communication among ISIS supporters shortly after Monday night's attack in Manchester, England, reminiscent of other large ISIS attacks. That was a strong signal to her that ISIS was directly behind the bombing.

On Tuesday, as she expected, ISIS issued its own statement, strengthening her belief that it was directly involved. The Amaq News Agency followed shortly afterward with a bulletin of its own.

Either way, outlets like the Long War Journal and SITE Intelligence Group monitor what's being posted. When a claim has been made, they'll translate it and publish it online.

Reporters can be fairly confident the claims come from ISIS, because the extremist group has been very conscious of controlling and spreading its message. In addition, ISIS has a radio station and uses other social media, so it could respond in multiple ways if it sees something that is not its official position.

Has ISIS ever claimed responsibility for attacks that turned out to be totally unrelated to it?

"We have not been able to find a real lie from ISIS," said Katz, who follows the group's social media obsessively with a critical eye. "Despite the fact that they are a terrorist organization, they want to provide their followers and supporters with authentic information."

Joscelyn said he can't think of an example of an outright false claim by ISIS in the U.S. and western Europe. There are plenty of exaggerations — on death tolls, for instance — and the statements shouldn't be assumed to be true. (For instance, the ISIS claim for the attack on a concert in Manchester didn't describe a suicide bomber, and had slightly inflated numbers of the dead and wounded.)

The Shaky State Of The Islamic State

But in the West, "when ISIS claims something ... usually there's something there," Joscelyn said.

That's not true in Turkey and other parts of the world, where claims can be murkier, he said.

What does it mean to be "responsible" for an attack? Does the Islamic State distinguish between attacks it inspired and attacks it planned?

Joscelyn said ISIS will credit "a soldier of the caliphate" for an attack, regardless of whether it was planned by ISIS or just carried out in the group's name.

"The way they issue claims mixes and mingles different types of operations," he said. Groups of ISIS-trained operatives have carried out ISIS-planned bombings. ISIS handlers in Raqqa, Syria, have guided untrained people in Europe through online communications. And at the far end of the spectrum, there are "lone wolf" attacks planned and carried out independently, based on ISIS propaganda.

"You can have somebody who had no direct ties to ISIS whatsoever, at least that we're aware of — someone who was inspired by the Islamic State but not actually directed by them at all," Joscelyn said.

The attackers responsible for mass shootings in San Bernardino, Calif., and Orlando, Fla., for instance, were claimed by ISIS though they appeared to have no direct ties to the group.

ISIS is equally willing to claim them all. The distinction seems to make no difference.

How long does it usually take for an ISIS claim to go up?

ISIS will generally claim an attack within one day, although it can sometimes take longer.

If ISIS puts up a statement immediately after an attack, if there is a prerecorded video made by the attacker, if the group provides the name and other details of the attacker ... these all suggest a carefully planned ISIS attack.

Conversely, if it takes longer than usual to respond, and if there are no details about the attacker, and if the information is coming only from the Amaq News Agency and not directly from ISIS, then it suggests that ISIS was not aware of the attack in advance.

Does ISIS claim every attack?

No, Joscelyn said — for reasons that are often unclear, ISIS will sometimes never lay claim to an attack that turns out to be linked to them.

That means a lack of an ISIS claim doesn't necessarily mean it wasn't ISIS-inspired, or even ISIS-directed.

What does it mean for a claim to be "unconfirmed"?

It can take weeks to get sense of ISIS' involvement, and months for the full picture of what happened to be uncovered by authorities. That work is necessary not just to confirm an ISIS link, but to determine what kind of link it is.

That's why early reporting will say that ISIS "claimed responsibility," but stories published later might note that the group either "carried out" or "inspired" an attack.