Accessibility links
After Botched Raid, Philippines Tries To Reclaim A City Under Siege : The Two-Way With an island under martial law and civilians escaping Marawi City, which is occupied by ISIS-linked militants, President Rodrigo Duterte struck a hard line Wednesday: "If you fight us you will die."

After Botched Raid, Philippines Tries To Reclaim A City Under Siege

After Botched Raid, Philippines Tries To Reclaim A City Under Siege 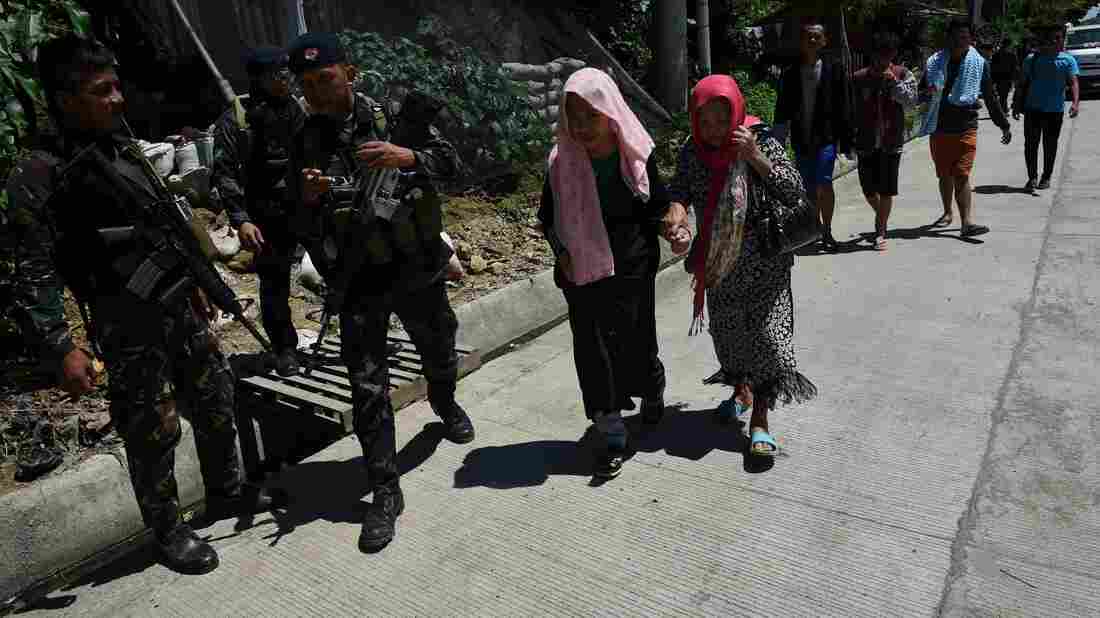 Philippine security forces escort Marawi City evacuees at a checkpoint near a neighboring city on the southern island of Mindanao on Wednesday. President Rodrigo Duterte declared martial law on the island, and government forces have been trying to drive militants from Marawi since they began occupying it Tuesday. Ted Aljibe/AFP/Getty Images hide caption 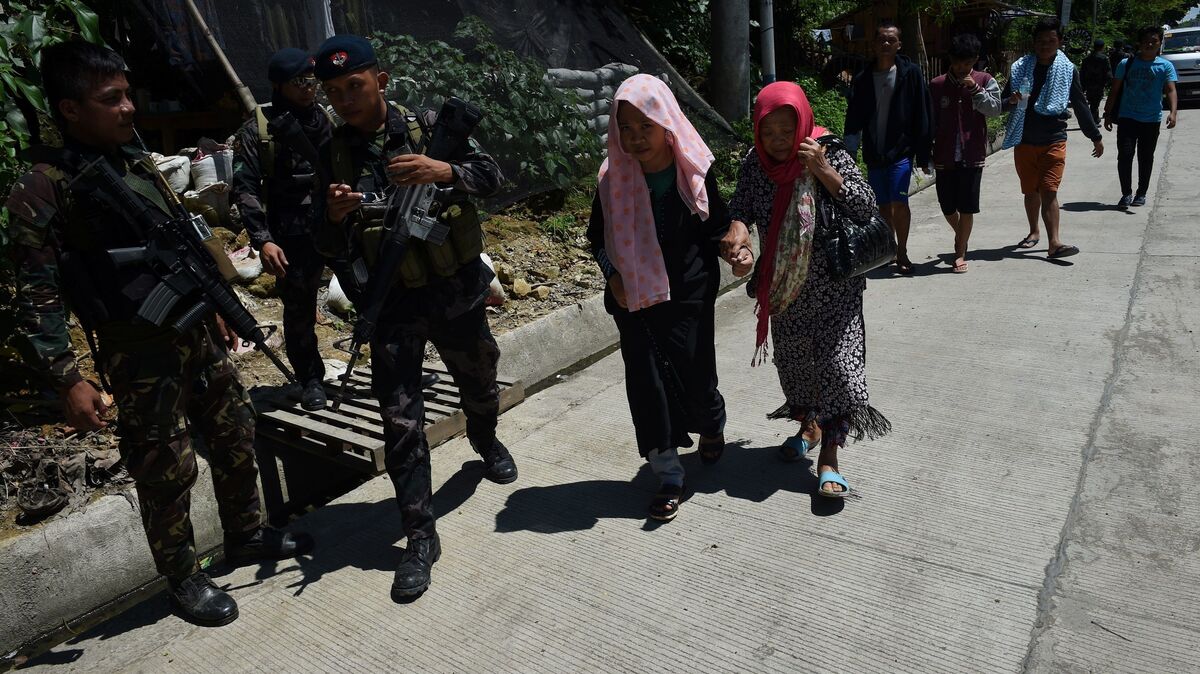 Philippine security forces escort Marawi City evacuees at a checkpoint near a neighboring city on the southern island of Mindanao on Wednesday. President Rodrigo Duterte declared martial law on the island, and government forces have been trying to drive militants from Marawi since they began occupying it Tuesday.

Newly arrived from Moscow, just hours after cutting short his diplomatic visit to Russia, Philippine President Rodrigo Duterte stepped behind a lectern to explain his decision to declare martial law in the southern island of Mindanao.

With his right hand raised, Duterte made a stark pledge.

As he spoke in Manila, members of the military gathered on the outskirts of Marawi, one of Mindanao's largest cities. Reinforcements were setting up in barracks, manning checkpoints and preparing to resume an effort to reclaim Marawi City from ISIS-linked militants, who have occupied the area since a raid went awry Tuesday.

The military had aimed to quickly capture Isnilon Hapilon, a senior leader with Abu Sayyaf, only to be surprised midafternoon Tuesday by an influx of roughly 100 jihadi fighters backing him.

Between that botched operation and Duterte's speech, Abu Sayyaf militants and their allies in the Maute Group raised the black flags of ISIS above some public buildings, burned some other buildings and killed at least three members of the security forces, according to Philippine authorities. Among those killed, Duterte said Wednesday, is a police officer who was abducted and beheaded.

Archbishop Socrates Villegas, president of the Catholic Bishops' Conference of the Philippines, also said jihadi fighters had taken a priest and at least a dozen other people hostage.

"They have threatened to kill the hostages if the government forces unleashed against them are not recalled," Villegas said in a statement. "[The priest] was not a combatant. He was not bearing arms. He was a threat to none."

Civilians have also flooded out of the city to escape the violence, which one witness described to Al-Jazeera as unrelenting. 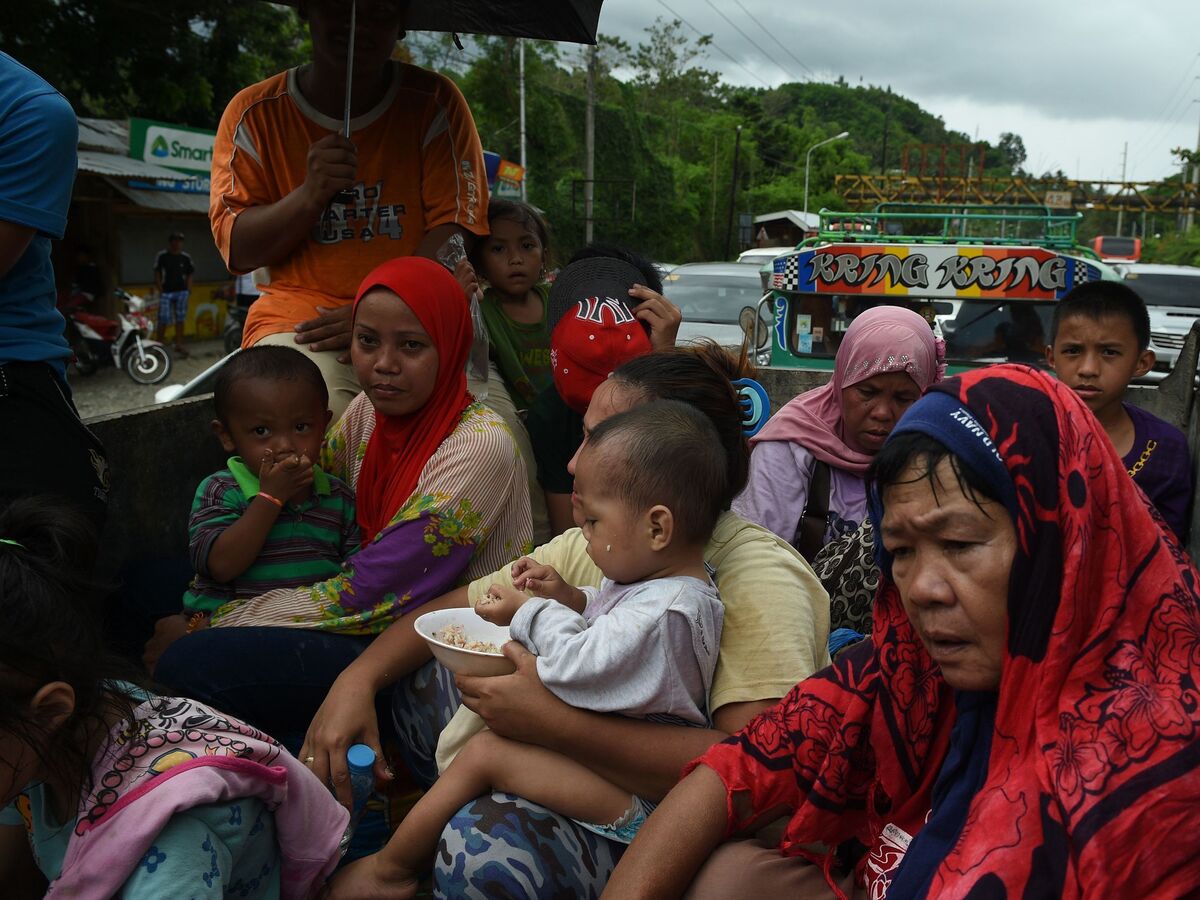 Residents fleeing Marawi City sit cramped in a truck that's stuck in gridlock near a police checkpoint at Iligan City, nearby on Mindanao.

"Please pray for us here," Mohammad Abedin, president of the Lanao Del Sur Medical Society in Marawi, told the publication. "We can see houses burning and we don't have electricity now."

In response, Duterte not only interrupted his trip to Russia and declared martial law in the island of 22 million people — he suggested the possibility of expanding martial law nationwide.

"I might also decide to suspend the writ of habeas corpus in the Visayas," the president said at the news conference Wednesday, saying the country's central set of islands is within walking distance of Mindanao.

He added: "If I think that ISIS has taken a foothold also in [the main northern island of] Luzon, and terrorism is not really far behind, I might declare martial law throughout the country."

Martial law in the Philippines is restricted to 60 days — though Duterte, who has been accused of crimes against humanity for alleged extrajudicial killings, alarmed many observers by saying his use of martial law would be similar to that of the Philippines' longtime dictator Ferdinand Marcos.

"To those who have experienced martial law, it would not be any different from what President Marcos did," Duterte said on his flight back to the Philippines. "I'll be harsh."

Marcos himself declared martial law in 1972, using the maneuver to help him maintain his grasp on power for nearly a decade.

The National Union of Peoples' Lawyers, a human rights group, decried Duterte's move in a statement, saying it "appears as a sledgehammer, knee-jerk reaction."

"The recent pronouncement made by the President that the martial law in Mindanao will be as harsh as Marcos' martial law is a dangerous edict," NUPL Secretary-General Ephraim B. Cortez said. "The declaration of martial law should be an option of last resort and should be strictly within the bounds, requirements, and limitations of the Constitution."

Duterte, however, has cast the decision as one he made reluctantly — and one that, now that he's made it, he's resolved to carry through to its conclusion.

"I have always said, 'Do not force my hand into it,' " he declared Wednesday, "because if I start to declare martial law, I will solve all the problems of Mindanao connected with law and order."