Accessibility links
Jeremy Joseph Christian, 35, Charged With Killing 2 In Portland, Ore., Knife Attack : The Two-Way The disturbance began when a man started yelling on train, including slurs at two apparently Muslim women. When others tried to intervene, the man stabbed three of them. 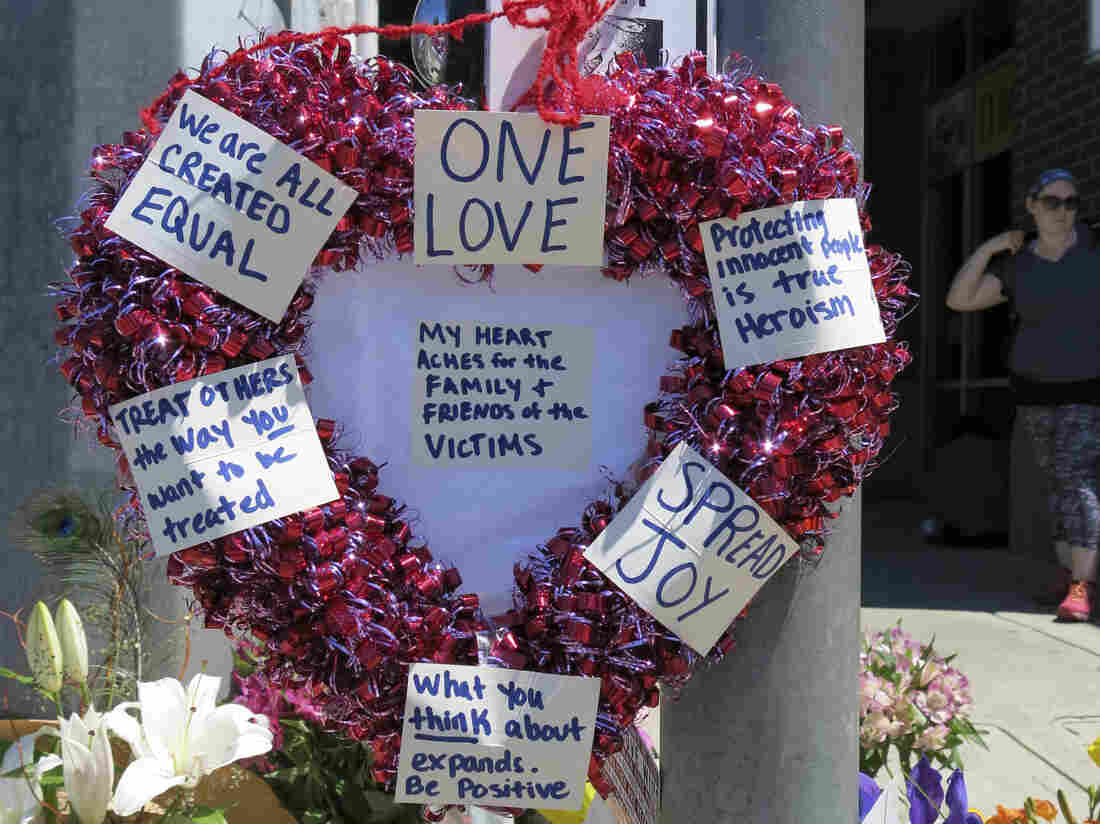 A heart-shaped wreath covered with positive messages hangs on a traffic light pole Saturday at a memorial for two bystanders who were stabbed to death Friday on a light-rail train in Portland, Ore. Gillian Flaccus/AP hide caption 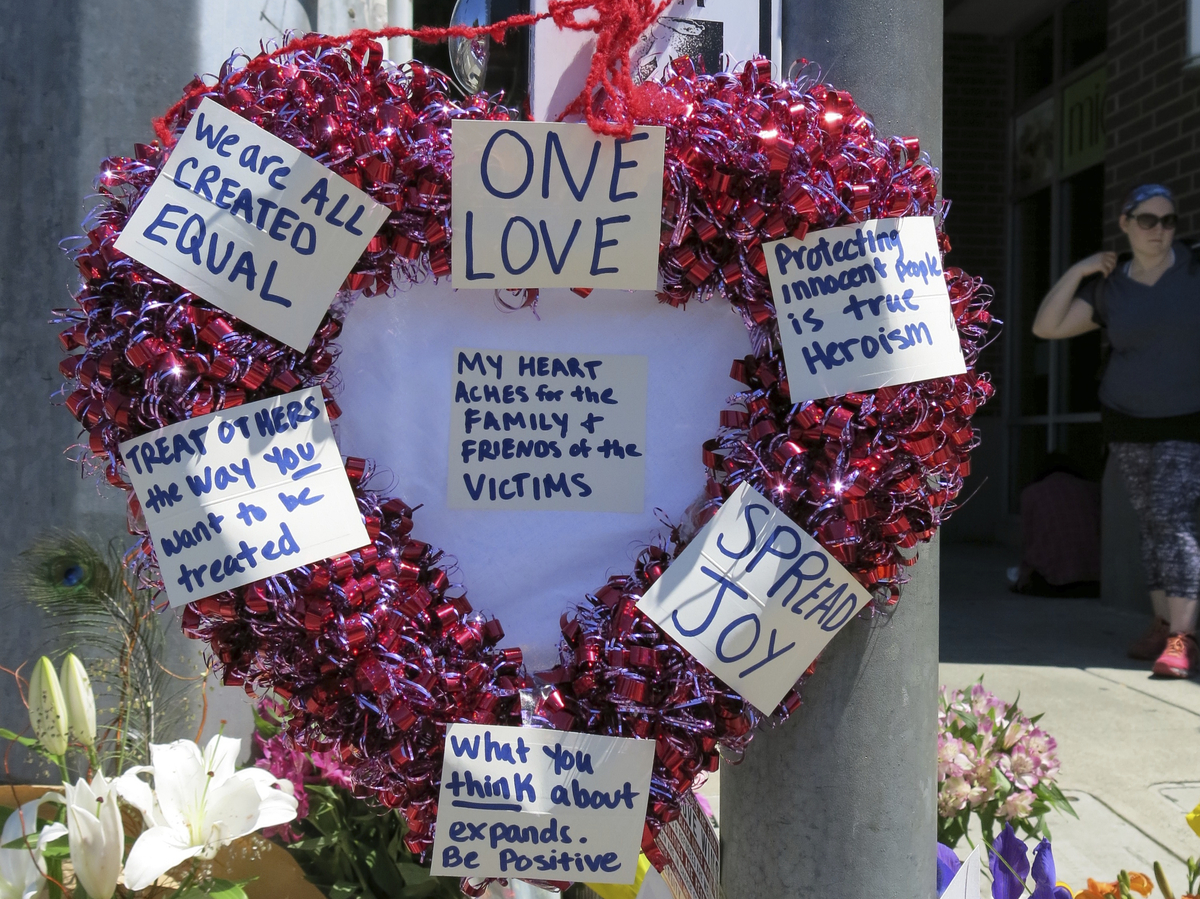 A heart-shaped wreath covered with positive messages hangs on a traffic light pole Saturday at a memorial for two bystanders who were stabbed to death Friday on a light-rail train in Portland, Ore.

Two people are dead and one was injured after a stabbing on a train in Portland, Ore., on Friday afternoon.

Police say the disturbance began when a man on a light-rail train "began yelling various remarks that would best be characterized as hate speech toward a variety of ethnicities and religions." Among the subjects of his diatribe were two young women who appeared to be Muslim; one was wearing a hijab. 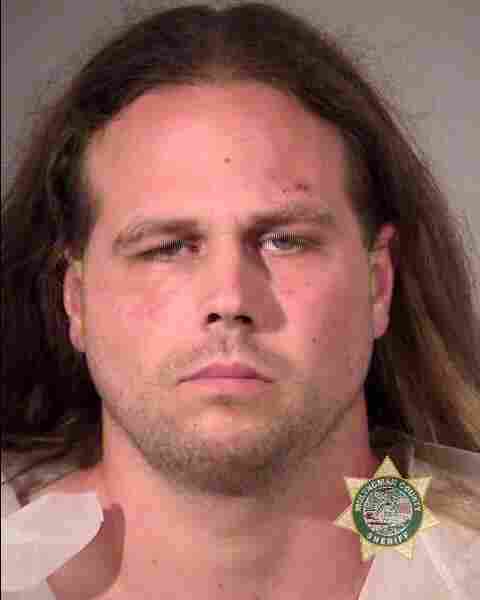 "In the midst of his ranting and raving, some people approached him and appeared to try to intervene with his behavior and some of the people that he was yelling at," Sgt. Pete Simpson told The Oregonian. "They were attacked viciously."

The suspect stabbed three men before fleeing the train; police located him and took him into custody.

A third man, 21-year-old Micah David-Cole Fletcher, is injured but expected to survive.

Taliesin Myrddin Namkai Meche, My dear baby boy passed on yesterday while protecting two young Muslim girls from a racist man on the train in Portland. He was a hero and will remain a hero on the other side of the veil. Shining bright star I love you forever.

Police identified the suspect as 35-year-old Jeremy Joseph Christian of North Portland. He has been booked on two counts each of aggravated murder and intimidation in the second degree, and one count each of attempted murder and being a felon in possession of a restricted weapon.

Police Sgt. Pete Simpson describes the attack on a Portland train on Friday.

Oregon Public Broadcasting reported that Simpson said that, though the attack happened just before the start of Ramadan, police weren't yet sure the attack was "religiously motivated."

"According to some preliminary witness statements, he was kind of spewing hate about a lot of different things," said Simpson. "So not specifically and exclusively anti-Muslim. ... So that's why it's hard to say at this point was he directing it at any one person, or was it just kind of in general to everyone around him."

Imtiaz Khan, president of the Islamic Center of Portland, told OPB that since the election, hate speech and harassment of the Muslim community have increased.

"We are very sad. Ramadan started just a couple hours ago," said Khan. "We are very sorry for the two men who tried to do the right thing."

Khan said that "of course people from the Muslim community are concerned. And unfortunately the easy targets are women because of the headscarf."

Police say they have identified and been in contact with the two women, whose identities were not released.

The Portland Mercury reports that the suspect was a "known local white supremacist." The alternative weekly published photos and video of Christian at a "March for Free Speech" on April 29, to which he brought a baseball bat. Draped in an American flag, he yelled "I'm a nihilist," and shouted profanity and racial slurs.

In a February 2016 post, he wrote: "I'm sure most of you don't remember but the American Nazi Party was taking care of a stretch of highway in Oregon about 10 years ago until ODOT took down their sign. Apparently Nazis don't have the freedom to exercise their civic duties in this State. Why? Because we live in a Fascist Police State run By 'Liberal' 'Multicultural' NAZIS!!!"

In a statement released Saturday, police say they will "extensively examine" Christian's background, "including the information publicly available about the suspect's extremist ideology" in their investigation. Christian wasn't flagged as a gang member, "nor does he have any known mental health history listed," the department said.

Court records show that Christian was convicted in 2002 of robbery, kidnapping and a weapons charge, according to the AP.

Police say the state medical examiner was conducting autopsies on the victims on Saturday.

Christian will be arraigned on Tuesday and could face additional charges.