Accessibility links
Jim Bunning, Hall Of Fame Pitcher And Former U.S. Senator, Dies At 85 : The Two-Way Bunning was one of few ballplayers to pitch no-hitters in both leagues; in 1964, he pitched a perfect game. As a politician, the Kentuckian was known as cantankerous and staunchly conservative. 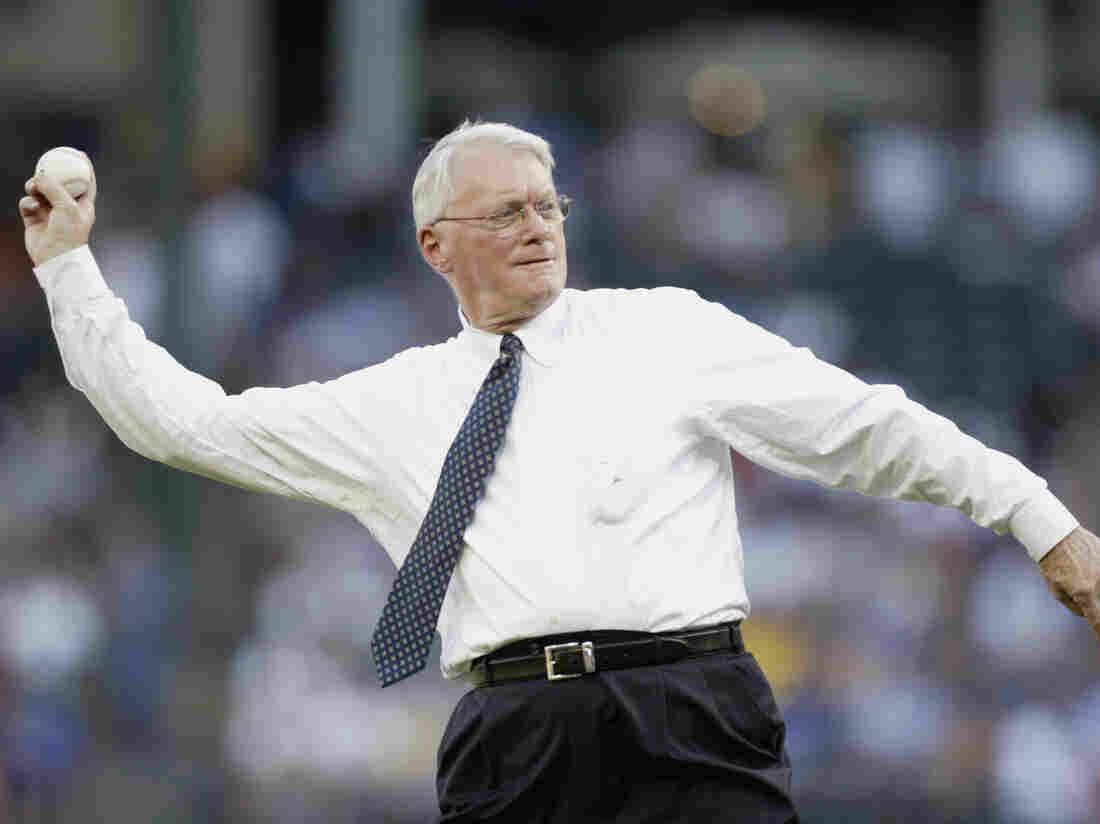 Then-Sen. Jim Bunning, a Hall of Fame pitcher, delivers a pitch prior to a game in Arlington, Tex., in 2003. Bunning died Friday at age 85. Ronald Martinez/Getty Images hide caption 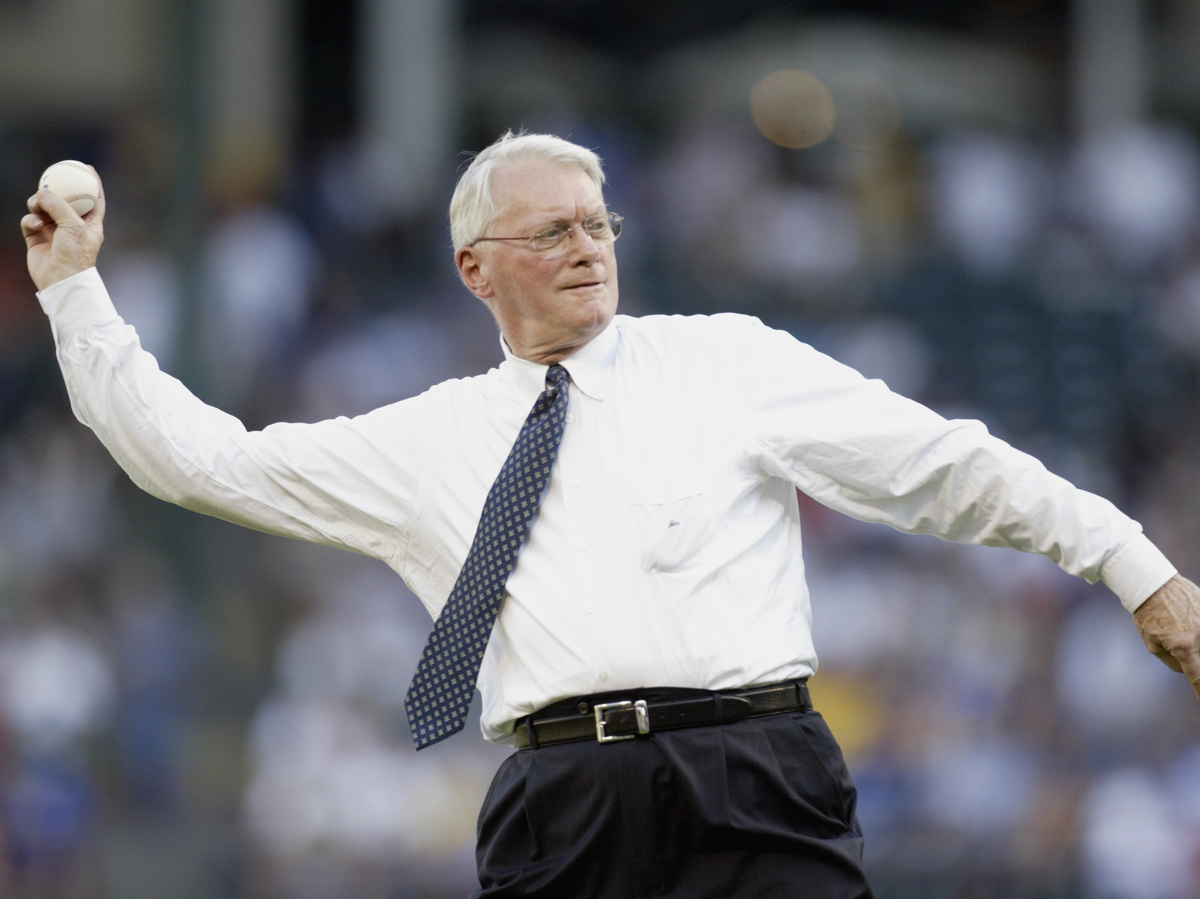 Then-Sen. Jim Bunning, a Hall of Fame pitcher, delivers a pitch prior to a game in Arlington, Tex., in 2003. Bunning died Friday at age 85.

The New York Times reports that he had a stroke last October. The AP confirmed the death with Bunning's former chief of staff, Jon Deuser.

Bunning served six terms in the House and two in the Senate. As a major league pitcher from 1955 to 1971, he played for the Detroit Tigers, Philadelphia Phillies, Pittsburgh Pirates and Los Angeles Dodgers. He was the only Hall of Fame baseball player to have served in Congress, according to the AP.

The six-foot-three ballplayer had a reputation as intimidating. As the Louisville Courier-Journal writes:

"In his 15-year career in the big leagues, Bunning developed a reputation for throwing the ball close to batters, trying to back them off the plate. 'If he had to brush back his mother, I think he'd do it to win,' former Detroit Tigers second baseman Frank Bolling said of his one-time teammate.

In his second career, instead of baseballs, Bunning went after opponents and issues with strong rhetoric and an intense certainty in the correctness of his own views.

That was especially true with abortion. A Roman Catholic with nine children, Bunning voted consistently to limit abortion as an option for women and had contempt for colleagues who softened their position on the highly emotional issue."

In 1964, Bunning pitched a perfect game, one of just 23 in the modern era. It was the first perfect game pitched in the National League since 1880. In addition to throwing no-hitters in both the American and National Leagues, he was also the second pitcher after Cy Young to win 100 games and pitch 1,000 strikeouts in both leagues, according to the Hall of Fame. Bunning was inducted into the Hall in Cooperstown, NY., in 1996.

On June 21, 1964, Bunning pitched a perfect game, the ninth in major league history.

In 1968 he led Athletes for Nixon, according to the Courier-Journal; Bunning first entered politics in 1977, winning a seat on Fort Thomas, Ky., city council. He was elected to the House of Representatives in 1986 and to the Senate in 1998.

The Courier-Journal reports that in his 1998 Senate race, Bunning tried to look more moderate, "talking about the need to clean up the environment and educate children, endeavors that he had not emphasized previously. In fact, in the House he voted to cut the Environmental Protection Agency budget and kill the U.S. Department of Education," it says.

"Bunning was best known for his efforts to safeguard Social Security benefits, sponsoring, among other things, legislation that made the Social Security Administration a separate agency," writes Politico. "He also supported legislation to aid adoptive parents and was known for actively working on local Kentucky issues and, whenever they came before Congress, baseball-related issues."

As a politician, he was known as "blunt and abrasive," according to the publication. "In 1993, for instance, he referred to President Bill Clinton as 'the most corrupt, the most amoral, the most despicable person I've ever seen in the presidency.' In 2009, he made headlines by predicting Supreme Court Justice Ruth Bader Ginsburg would be dead of cancer within nine months."

In 2009, he said he would not seek another term in the Senate; his fellow Kentuckian, then-Senate Minority Leader Mitch McConnell, "all but pushed Bunning into retirement," NPR's David Welna reported at the time. McConnell's hand-picked choice to succeed Bunning lost in the primary to Tea Party candidate Rand Paul, whom Bunning endorsed.

We mourn the passing of Jim Bunning, a Hall of Fame pitcher and former U.S. Senator. He was 85. pic.twitter.com/NVTdhQuYmr

At the end of his run as a senator, in what NPR's Ron Elving called "a lonely crusade to become a fiscal hero," Bunning single-handedly held up unemployment payments for millions of Americans during a two-day filibuster against $10 billion in stimulus spending.

His son David Bunning is a U.S. district judge in Kentucky, who made the headlines in 2015 for jailing Kim Davis, the county clerk who refused to issue same-sex marriage licenses. On Saturday morning, David tweeted "Heaven got its No 1 starter today. Our lives & the nation are better off because of your love & dedication to family."