Accessibility links
Manuel Noriega Dies: Former Panamanian Dictator And CIA Informant Was 83 : The Two-Way General Manuel Antonio Noriega, who went from being a CIA informant to leading a nation and becoming a target of the U.S., has died. Noriega was ousted from power in 1989. 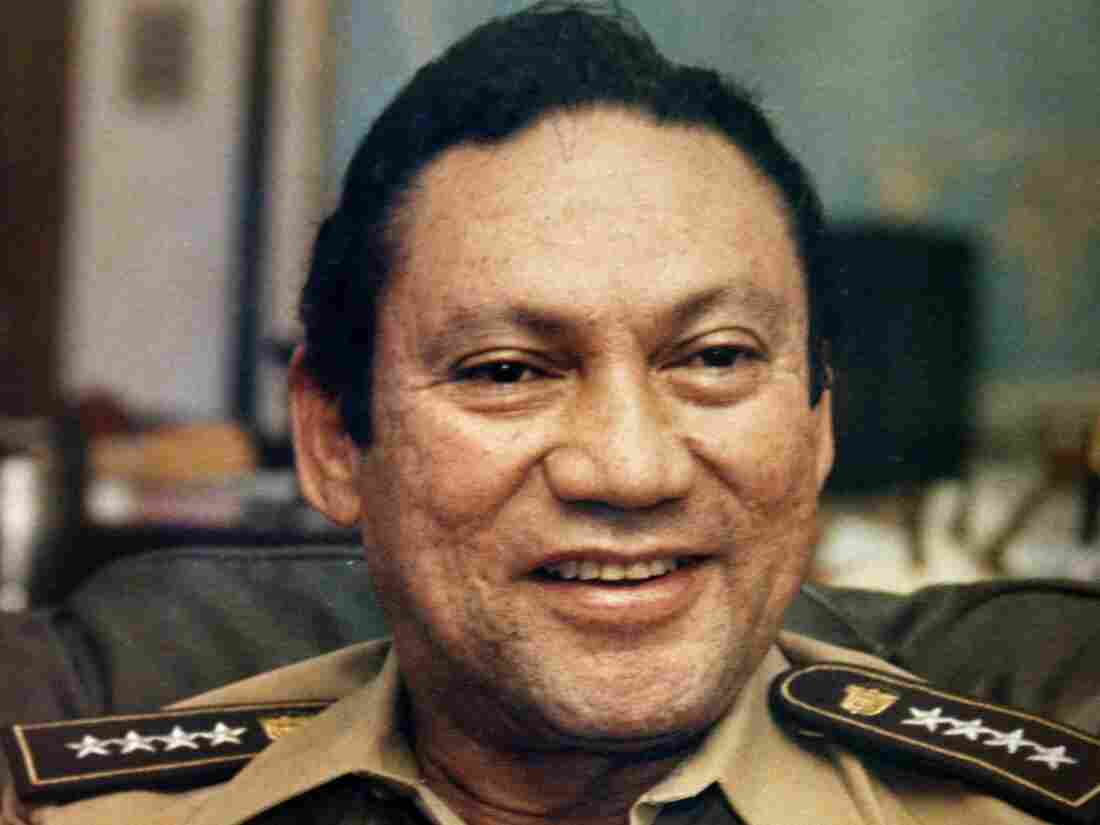 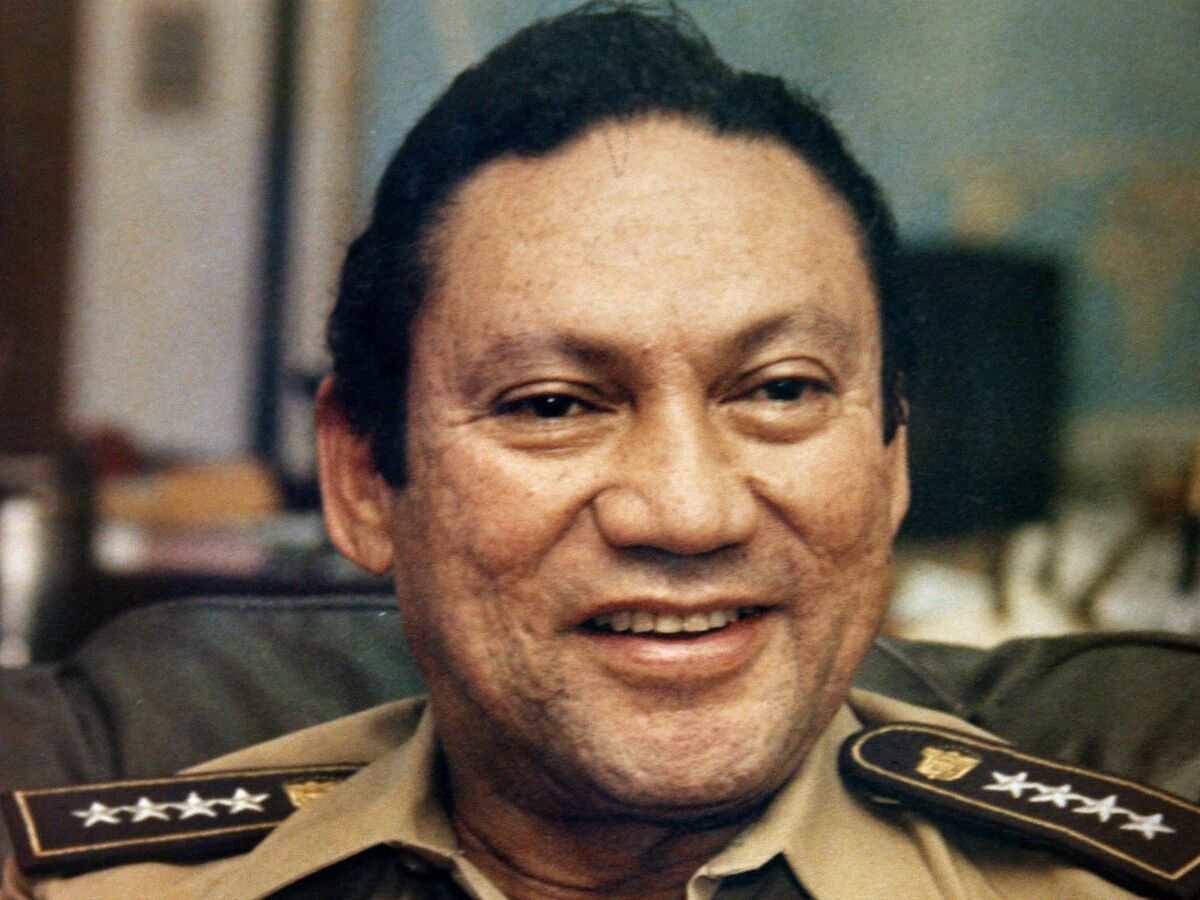 In this Nov. 8, 1989, photo, Panamanian military leader Gen. Manuel Noriega talks to reporters in Panama City. Panama's ex-dictator died Monday in a hospital in Panama City. He was 83.

Military commander, drug trafficker, CIA informant, dictator, convicted murderer: The strongman Gen. Manuel Noriega wore many labels during his tortuous path to — and fall from — the heights of power in Panama. Announcing Noriega's death at age 83 Tuesday, Panama's president said it "closes a chapter in our history."

Panama's President Juan Carlos Varela announced Noriega's death via Twitter. And while the cause of death wasn't immediately reported, Noriega had recently been dealing with complications from brain surgery; in March, it was reported that he was in a coma.

The era in which Noriega exercised absolute control over Panama is long past — but his ill-fated reign continues to cast a long shadow both in his home country and the United States, with whom he had a complex relationship.

At the time of his death in a Panama City hospital, Noriega was serving a prison sentence for corruption and having opponents killed.

Varela said Noriega's daughters and other family members "deserve a funeral in peace."

As he clawed his way out of an impoverished childhood, Noriega looked first not to the military, but the medical profession for his preferred profession. It was only after he was denied admission from medical school as a young man — likely because of his financial circumstances — that Noriega continued his studies at a military academy in Peru.

When he returned to Panama to begin his military career in earnest, he went into the intelligence services, where he quickly cultivated a stellar reputation among his fellow officers.

Noriega "possessed the uncanny ability to absorb information, size up the options available to an adversary, place himself in the other person's shoes and astutely anticipate probable courses of action," says John Dinges, author of the Noriega biography Our Man in Panama. 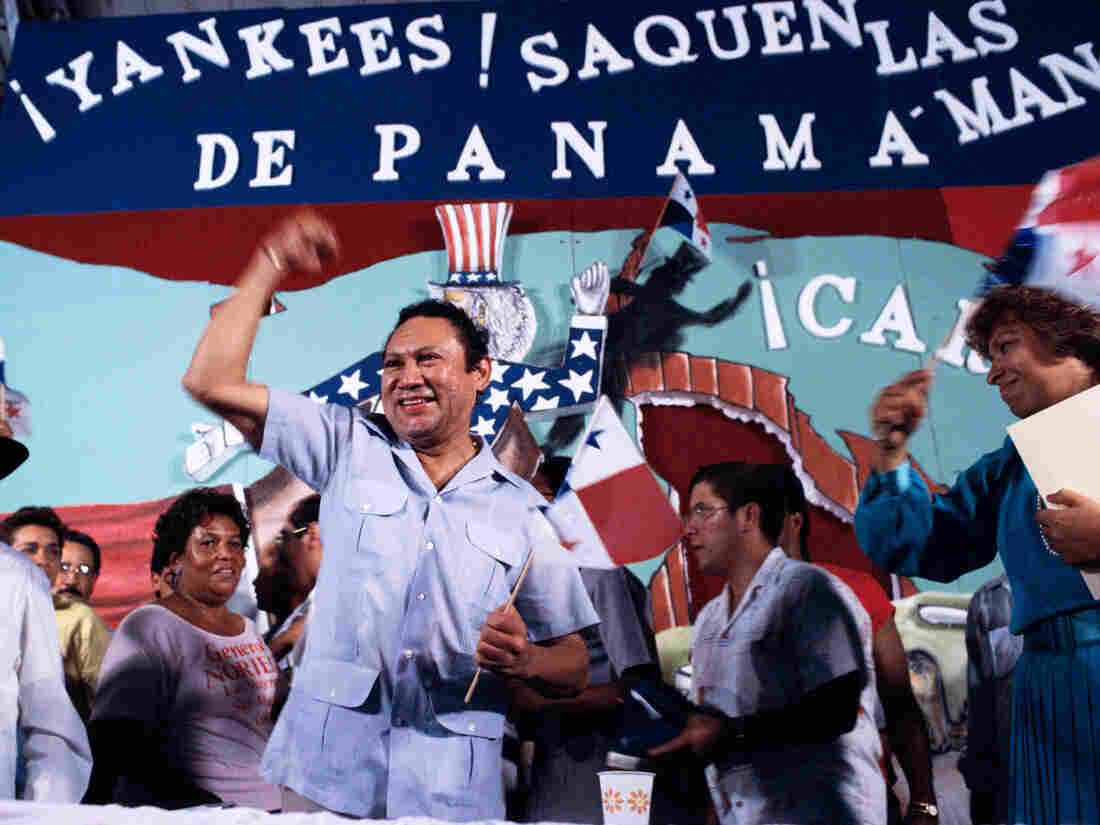 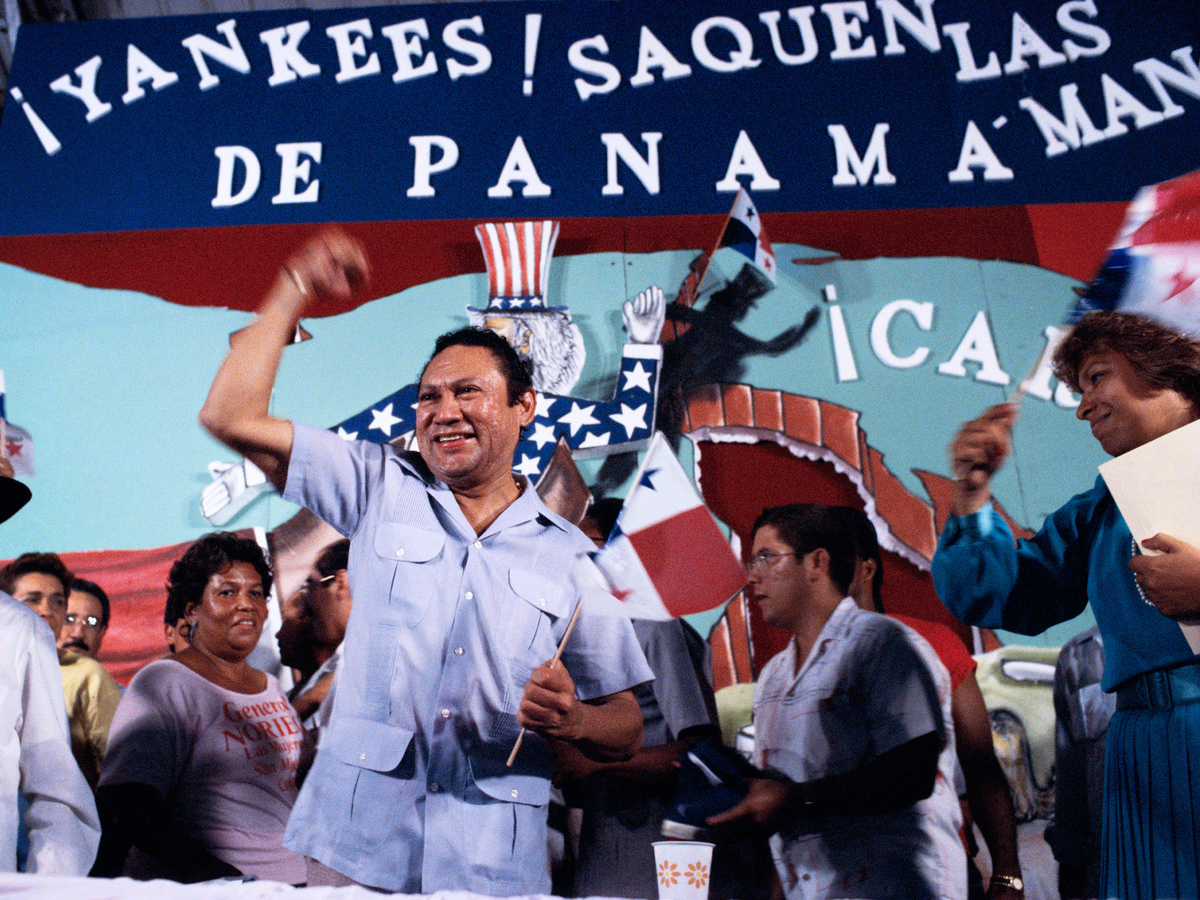 Noriega with supporters in February 1988.

By the '70s, Noriega had parlayed that ability into a burgeoning relationship with U.S. intelligence services — and with various gun- and drug-running cartels, including infamous Colombian narcotrafficker Pablo Escobar. Indeed, Noriega was so trusted by the U.S. that, as CNN notes, the U.S. government requested that he travel to Cuba to seek the release of "two American freighters seized by Cuba" in 1971.

As the decade wore on, the CIA paid Noriega for information even as Noriega climbed the ranks of his own country's military intelligence division, ultimately becoming its chief officer and one of the principal lieutenants of Panama's strongman at the time, Omar Torrijos.

After Torrijos died in a plane crash in 1981 — a crash that later engendered suspicions of foul play — Panama descended into a two-year struggle to fill the power vacuum Torrijos left behind.

Noriega emerged from the free-for-all with the mantle of commander of the combined Panamanian Defense Forces in 1983 — and in doing so, assumed absolute power in all but official name.

The de facto dictator would leave those official (and empty) titles to the series of puppet civilian presidents whose electoral victories he'd help engineer behind the scenes, a convenient fiction he would maintain until the twilight of his rule in 1989. 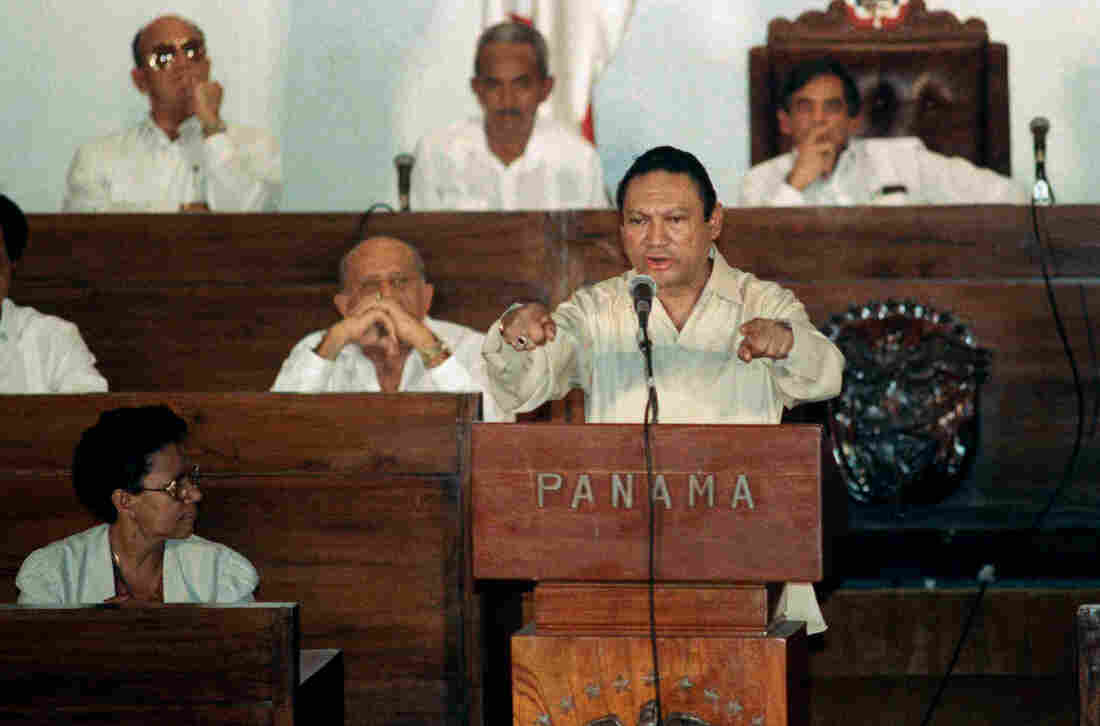 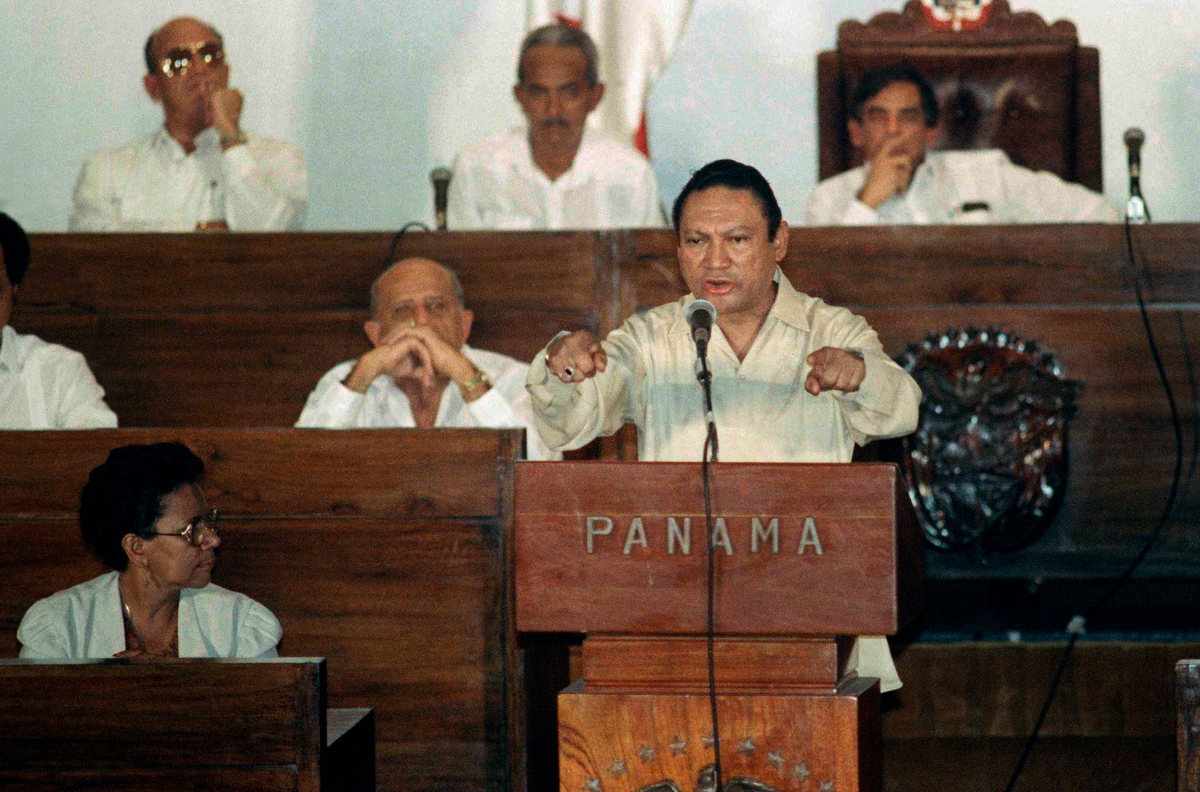 A fall from great heights

It wasn't long before Noriega's benefactor, the U.S., would turn on him, however. Evidence of the Panamanian dictator's extrajudicial killings and dealings with drug cartels mounted until it was nearly impossible to ignore — no matter how helpful he had proved to the CIA in the past.

By 1986, reports were circulating in the U.S. that Noriega had spearheaded the gruesome torture and murder of a high-profile rival and that he was now earning a payday from Eastern European governments for U.S. secrets. The U.S. Congress ended economic aid and military assistance to Panama in 1987.

Yet it was not until Noriega openly interfered with the 1989 Panamanian presidential election, seizing ballot boxes and installing his preferred candidate, that the U.S. openly began plotting his downfall.

After a U.S.-backed coup attempt failed in October 1989, then-President George H.W. Bush took a more direct step before year's end. On Dec. 20, citing Noriega's indictment on charges of racketeering, money laundering and drug-trafficking, the administration launched Operation Just Cause, an invasion force of more than 20,000 troops intended to oust him from power.

Noriega, naturally, explained the souring of his relationship with the U.S. differently.

"The United States understood that Noriega is not the same man that was lieutenant colonel," Noriega told American filmmaker Oliver Stone, who interviewed him in a U.S. federal prison in 1993. "Now he is commander in chief and said 'no' to our interests. And he is not our man." 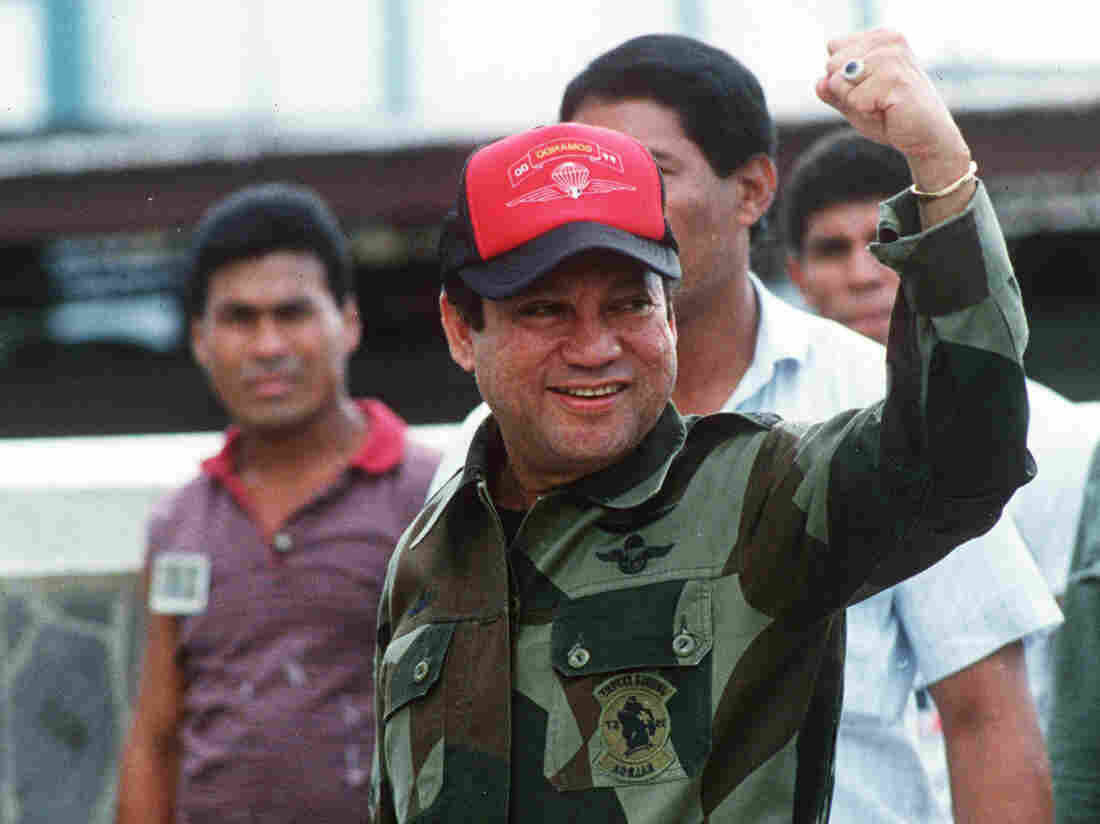 In this 1989 photograph, Noriega waves while leaving his headquarters in Panama City following a failed coup against him. It was just months before Noriega would surrender power amid a U.S. military operation against his government. Bob Sullivan/AFP/Getty Images hide caption 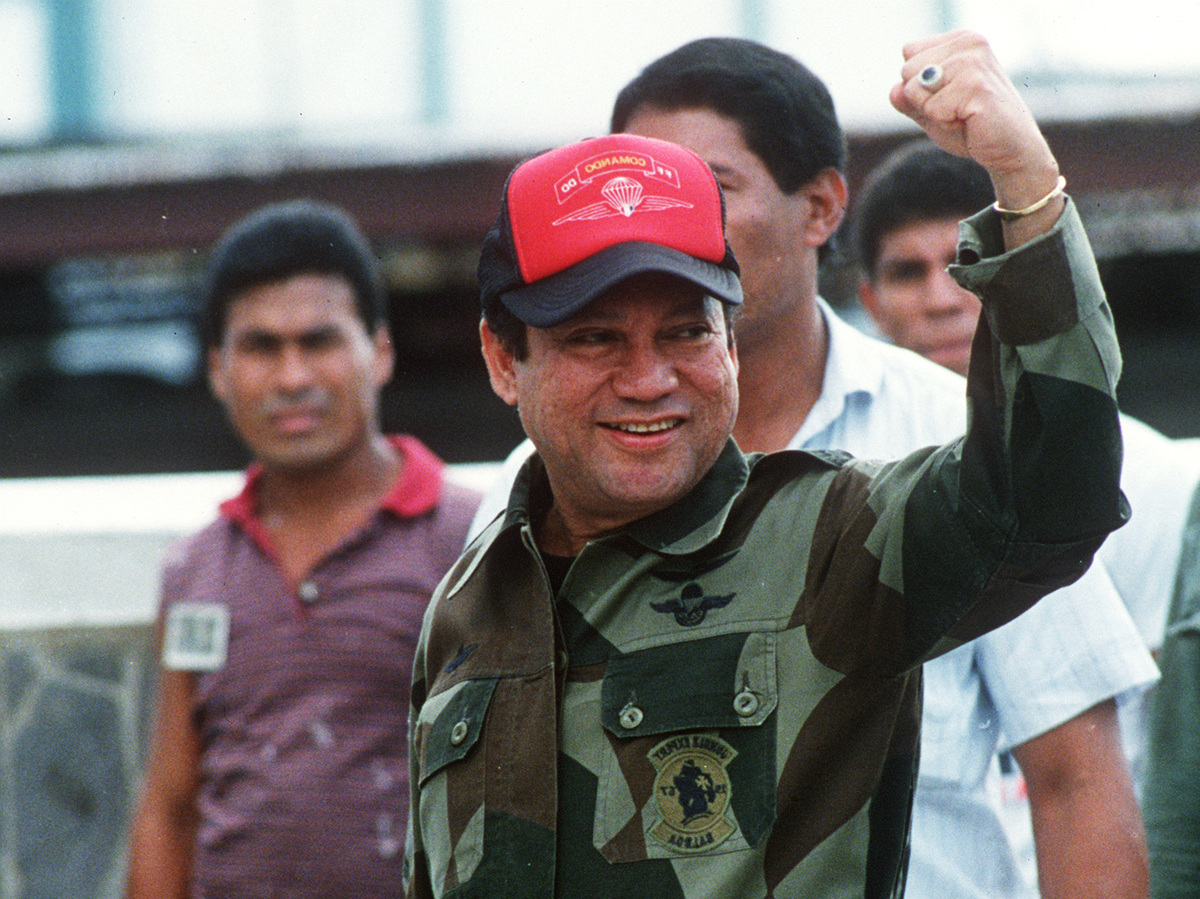 In this 1989 photograph, Noriega waves while leaving his headquarters in Panama City following a failed coup against him. It was just months before Noriega would surrender power amid a U.S. military operation against his government.

Though the reason for the conflict was disputed by Noriega, its result was not: After roughly a fortnight, Noriega surrendered to the U.S. at the Vatican Embassy in Panama City — but only after U.S. forces loudly blasted rock music (including Rick Astley's "Never Gonna Give You Up") outside the building during their efforts to drive him out.

Just a few days into 1990, Noriega was captured by the U.S. and transported to Miami to await trial.

There, he was convicted of a host of charges in federal court. And though his sentence in the U.S. was reduced to 15 years, his prison time ultimately was not — for he was also convicted of crimes in France and Panama, where he died at 83, still in custody for his crimes.