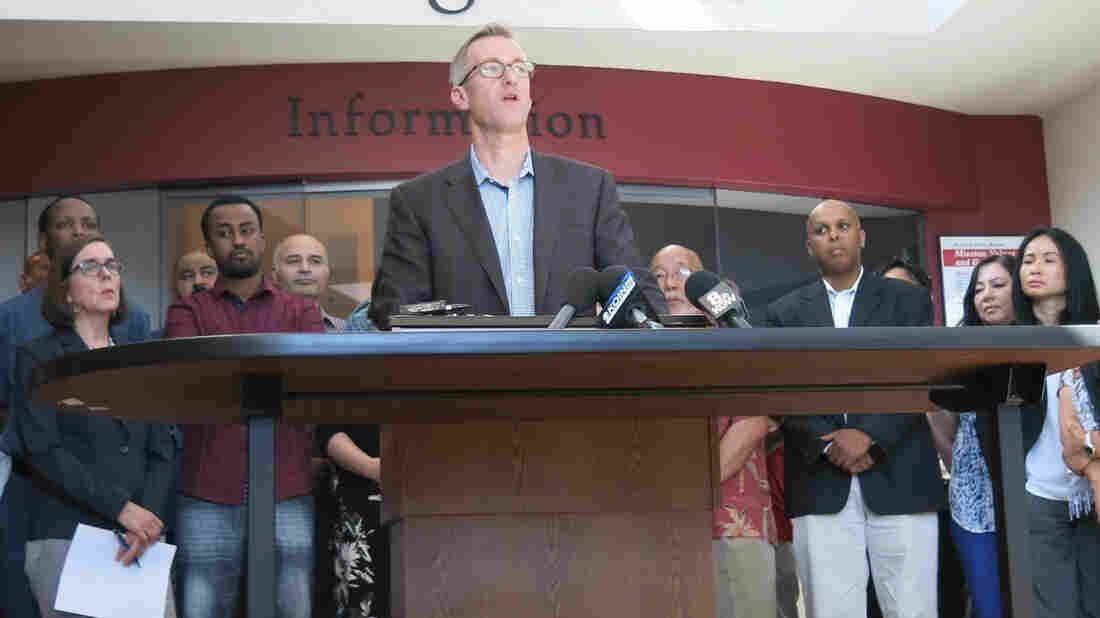 Portland Mayor Ted Wheeler speaks at a news conference in Portland on Saturday, after a man fatally stabbed two men Friday on a light-rail train when they apparently tried to stop him from yelling anti-Muslim slurs at two young women. Wheeler has since called for two planned demonstrations in Portland to be called off. Gillian Flaccus/AP hide caption 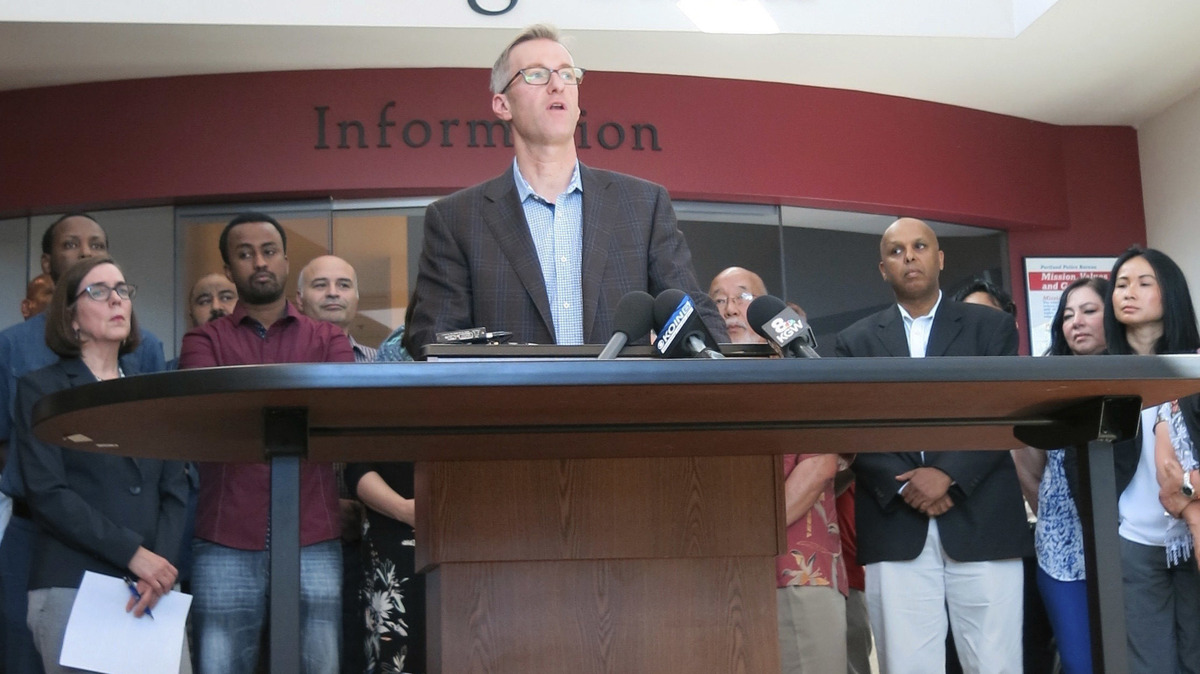 Portland Mayor Ted Wheeler speaks at a news conference in Portland on Saturday, after a man fatally stabbed two men Friday on a light-rail train when they apparently tried to stop him from yelling anti-Muslim slurs at two young women. Wheeler has since called for two planned demonstrations in Portland to be called off.

The mayor of Portland is calling for the cancellation of two right-wing rallies and marches scheduled for the next few weeks, given a recent stabbing in the city by a suspect who police say has expressed "extremist ideology."

Mayor Ted Wheeler has asked the organizers to cancel the events voluntarily while also urging the federal government to block the protests.

The ACLU of Oregon has responded on Twitter, saying in part, "The government cannot revoke or deny a permit based on the viewpoint of the demonstrators. Period."

Wheeler's comments come days after a man on a Portland train shouted racial and religious hate speech, some of it directed at two women, police say. The man then stabbed three male bystanders who apparently tried to intervene, killing two of them. Local media say the suspect in the stabbing, Jeremy Joseph Christian, has been identified as a white supremacist.

"Free speech or die," Christian shouted during his first court appearance Tuesday, repeatedly yelling over officials in the courtroom, according to Oregon Public Broadcasting. "Get out if you don't like free speech. You call it terrorism, I call it patriotism."

Jeremy Christian entered the court and immediately began shouting about " free speech" and "death to enemies of America".

The Oregonian reports that a "two-page probable cause affidavit filed after court" says Christian confessed to the stabbings immediately after his arrest:

"While still in the back seat of a patrol car, Christian said he hoped his victims died."

He is scheduled to be back in court June 7.

A "Trump Free Speech Rally" in Portland is scheduled for June 4, and a "March Against Sharia" for June 10th. Both events are planned in a plaza that is managed by the U.S. government, which offers permits for demonstrations.

"Our city is in mourning," Wheeler wrote on Twitter. "Our community's anger is real, and the timing and subject of these events can only exacerbate an already difficult situation."

The "Trump Free Speech Rally" is advertised as featuring Kyle Chapman, who is popular among alt-right groups and is famous for hitting an anti-fascist demonstrator with a stick. "There will be speakers exercising their free speech, live music, flags, and an uplifting experience to bring back strength and courage to those who believe in freedom," the Facebook post for the event says.

The June 10 event is one of nearly two dozen marches "against Sharia law and for human rights" planned by ACT for America in various cities. The organization calls itself "the NRA of national security," while the Southern Poverty Law Center calls it "the largest grassroots anti-Muslim group in America."

"I am appealing to the organizers of the alt-right demonstrations to CANCEL the events," Portland's mayor said. He also called on the U.S. government to revoke or refuse to issue the necessary permits for the demonstrations.

It was the appeal to the federal government to intervene that prompted a response from the ACLU of Oregon. The group defended the rights of the demonstration organizers, writing on Twitter, "We are all free to reject and protest ideas we don't agree with. That is a core, fundamental freedom of the United States."

"If we allow the government to shut down speech for some, we all will pay the price down the line," the ACLU of Oregon says. 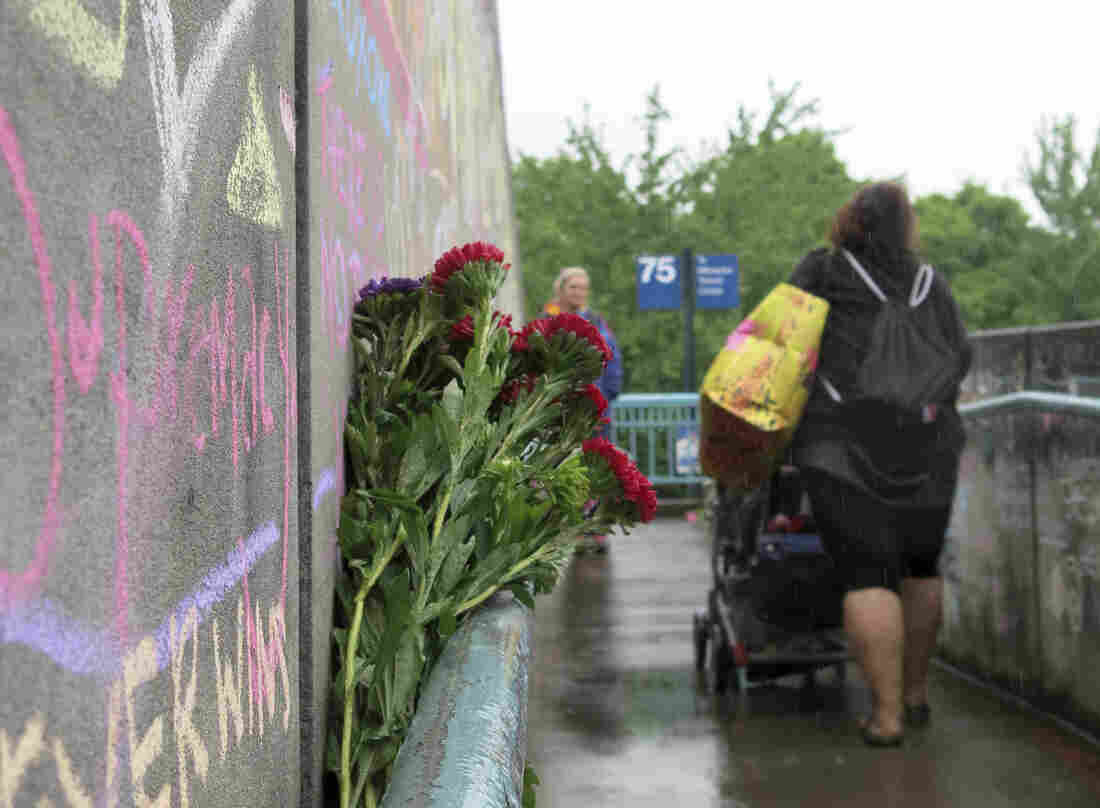 Commuters walk past a rain-soaked memorial on Tuesday to two men who were fatally stabbed after trying to stop another man who went on an anti-Muslim tirade against two young women in Portland, Ore. Gillian Flaccus/AP hide caption 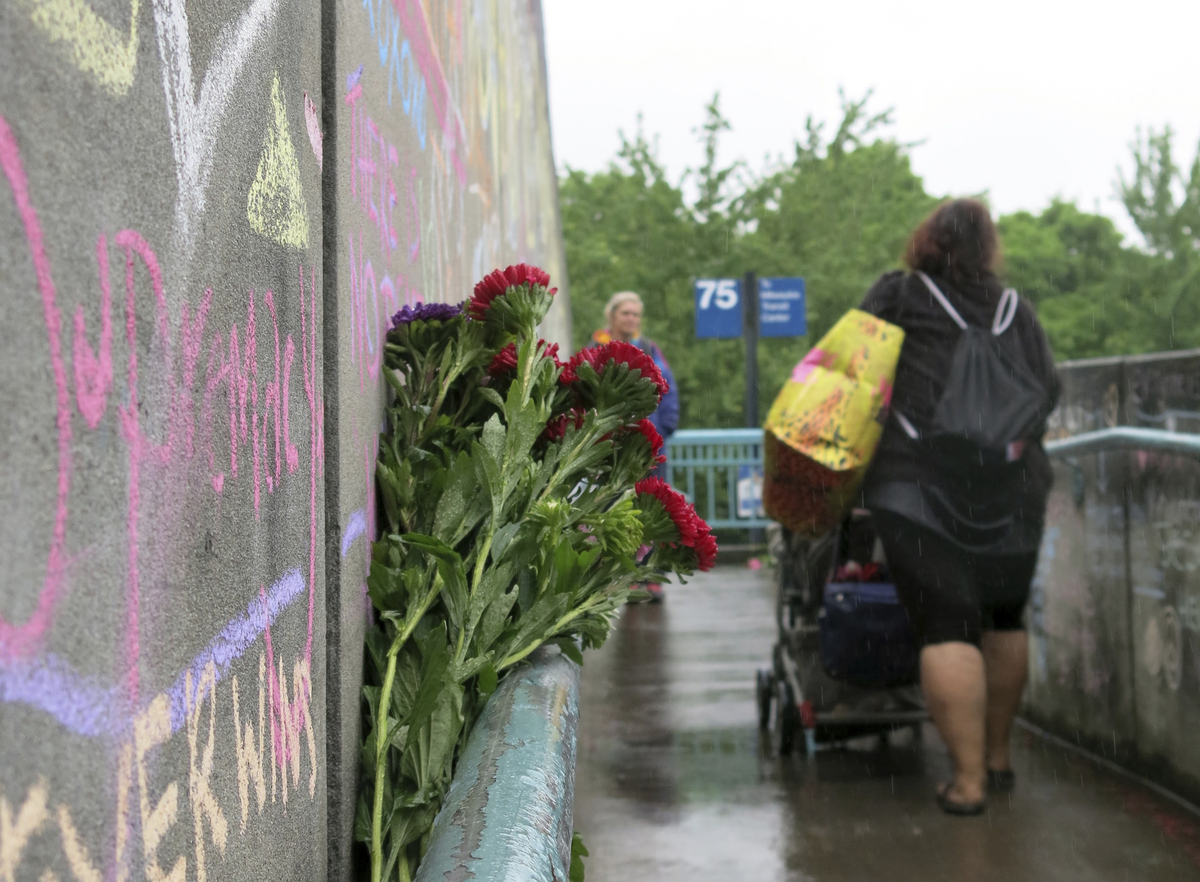 Commuters walk past a rain-soaked memorial on Tuesday to two men who were fatally stabbed after trying to stop another man who went on an anti-Muslim tirade against two young women in Portland, Ore.

Meanwhile, the mother of one of the stabbing victims has written a letter to President Trump asking him to condemn violence born out of hate.

Asha Deliverance's son, 23-year-old Taliesin Myrddin Namkai-Meche, was one of the two men who died. He "did not hesitate to act with love," she writes.

"You have said that you will be President for all Americans. So, I ask you Mr. President to take action at this time," Deliverance wrote to Trump. "Please encourage all Americans to protect and watch out for one another. Please condemn any acts of violence, which result directly from hate speech & hate groups."

You can read her full letter here.