Accessibility links
Trump Announces U.S. Will Leave Paris Climate Accord : The Two-Way President Trump followed through on his campaign trail vow to exit the historic international agreement. But he said the U.S. would begin negotiations to possibly re-enter the pact or a similar deal. 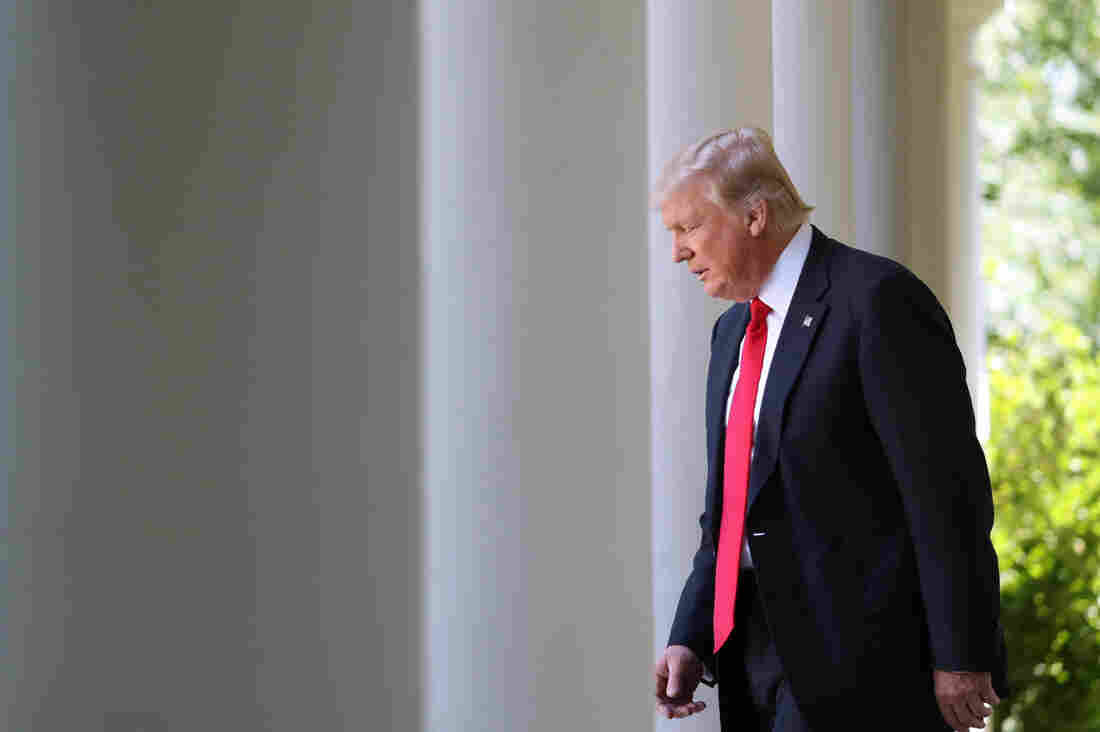 President Trump had been urged by world leaders, scientists and CEOs to keep the U.S. in the Paris climate accord, but the agreement's critics won out. Andrew Harnik/AP hide caption 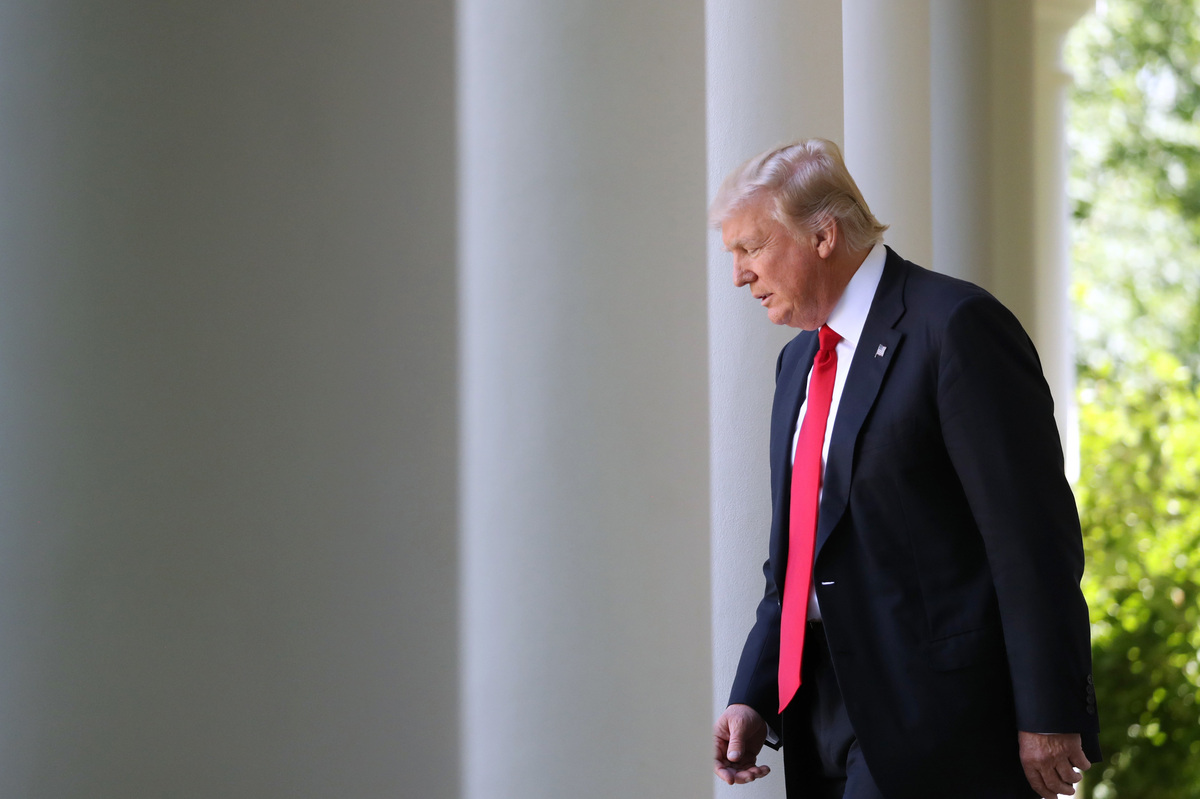 President Trump had been urged by world leaders, scientists and CEOs to keep the U.S. in the Paris climate accord, but the agreement's critics won out.

President Trump has announced that the U.S. will be withdrawing from the Paris accord — the historic global agreement reached by 195 countries in 2015 to set targets for reducing greenhouse gas emissions and limiting the rise in average global temperatures.

During a news conference Thursday in the Rose Garden at the White House, Trump said the withdrawal is aimed at keeping his campaign promise to put American workers first. But he added that the U.S. would begin negotiations to possibly re-enter the Paris accord or a similar deal that, he said, would result in a better deal for American workers.

"The agreement is a massive redistribution of United States' wealth to other countries," Trump said. "It's to give their country an economic edge over the United States. That's not going to happen while I'm president. I'm sorry."

He later added: "Our withdrawal from the agreement represents a reassertion of American workers' sovereignty."

During his campaign, Trump vowed to "cancel" U.S. participation in the deal. World leaders and business figures had recently urged him to reconsider, but by Wednesday morning, reports began to surface that Trump had decided to leave the pact.

Barack Obama had used his authority as president to join the Paris accord without a vote in Congress. That means Trump can remove the U.S. from the accord without a vote. But it will take awhile: Under the terms of the agreement, he wouldn't actually be able to withdraw until November 2020.

Leaving the underlying treaty — the United Nations Framework Convention on Climate Change — would be faster and could be completed within a year. But that treaty was ratified by the U.S. Senate. Presidents have unilaterally exited Senate-ratified treaties before, but it's rare and controversial.

Urged to stay, urged to leave

A wide chorus of voices had called for Trump to recommit to the Paris agreement: other world leaders and hundreds of scientists, of course, but also CEOs of major energy companies and other big U.S. corporations. Even many of Trump's own advisers support the deal, according to The New York Times.

But those supporting a departure won out. More than 20 Republican senators had called for Trump to leave the deal. Influential Trump advisers, reportedly Steve Bannon and Environmental Protection Agency Administrator Scott Pruitt, also urged him to withdraw.

5 Things That Could Change When The U.S. Leaves The Paris Climate Deal

And then, of course, there was the argument advanced by candidate Trump. On the campaign trail, he criticized the agreement that the U.S. formally signed on to last year. He called the deal "unfair" to the U.S., objecting in particular to the requirement that wealthy nations help developing countries build renewable energy sources.

He remained consistent with those criticisms Thursday.

"I cannot in good conscience support a deal that punishes the United States, which is what it does, while imposing no meaningful obligations on the world's leading polluters," Trump said — singling out China and India by name.

"In short, the agreement doesn't eliminate coal jobs, it just transfers those jobs out of America and the United States and ships them to foreign countries," he added. "This agreement is less about the climate and more about other countries gaining a financial advantage over the United States."

Though in his announcement Trump referred to himself as "someone who cares deeply about the environment," he has signaled, more broadly, that fighting climate change is not a priority for his administration. He has denied the existence of climate change and appointed as the head of the EPA a man who doesn't accept the overwhelming scientific consensus that humans are causing global warming by releasing carbon dioxide into the atmosphere. And he has already overturned several Obama-era efforts to reduce emissions.

The Paris accord was reached in 2015 after lengthy negotiations. The deal relies on voluntary cuts in emissions by all member nations.

The agreement also, significantly, sets a global target to keep the rise in the average temperature to no higher than 2 degrees Celsius above pre-industrial levels. And it calls for some $100 billion a year in funding from developed countries toward developing countries to support green energy sources.

Still, it fell short of what some parties had hoped for. Island nations — which face an existent threat from rising seawaters — had pushed hard for a target of 1.5 degrees Celsius. (Why not even lower? Well, as of 2015, the global average temperature had already risen by 1 degree Celsius, and even with robust efforts to cut emissions, some further increase is essentially inevitable.)

And the agreement relies on voluntary cuts in emissions, seen by some critics as a major weakness.

Still, the fact that the world managed to agree on a target was celebrated as a diplomatic achievement, one that multiple world leaders have emphasized as crucial to support. After the recent G-7 meetings of leading industrial nations, Indian Prime Minister Narendra Modi met with German Chancellor Angela Merkel and vocally supported her commitment to action on climate change.

Modi said failing to act on climate change would be "a morally criminal act." Merkel had previously vowed to "convince the doubters" among world leaders that "protecting the climate matters to all of us."

The doubters are in the minority. Only two countries — Syria and Nicaragua — have completely rejected the deal.

Several dozen countries have signed but not fully approved — including Iran, Turkey and, most significantly, Russia, which is a major emitter of greenhouse gases. But three-quarters of the countries on Earth have fully committed to the accord.

A pact in name or in deed?

It is important to note that the Paris accord is only as strong as each nation's actual reduction in emissions. That means leaving the agreement isn't the only way to weaken it: Trump could have kept the U.S. as a signatory but continued to slash the programs that would actually make it possible to reach the target for emissions.

The opposite is also true: U.S. greenhouse gas emissions could continue to go down, at least in the short term, even as Trump withdraws from the accord.

As NPR's Christopher Joyce recently reported, emissions in the U.S. have declined by about 12 percent since 2005.

"The U.S. has successfully bent its greenhouse gas emissions curve," Kate Larsen, of the economics research team Rhodium Group, told Christopher. "And we are going to continue to reduce emissions over the next 10 years, likely regardless of Trump policy."

But while the Paris accord isn't synonymous with U.S. emissions cuts, that doesn't mean Trump's decision on the accord is meaningless.

Economist Marc Hafstead, who is with Resources for the Future, told Christopher that exiting the deal "could potentially have political ramifications — to the extent that our pulling out of the agreement is going to cause other countries to do less."

It would also threaten the $100 billion a year pledged to help developing countries achieve emissions cuts, as Bloomberg has reported.

Meanwhile, many analysts see a U.S. departure from the deal as paving the way for China to take the lead on climate change.

It's not just a question of intangible moral leadership or even of the potential profits from green energy that would be on the table. The Atlantic reported last year that a U.S. departure would likely result in less-transparent mechanisms for actually enforcing the Paris accord — because Chinese "faulty and unreliable energy statistics" could play a prominent role.

By staying in the deal, the U.S. would have kept a spot at the negotiating table — and potential influence over how the agreement is enforced.

Reaction in the U.S.

He added: "I believe the United States of America should be at the front of the pack. But even in the absence of American leadership; even as this Administration joins a small handful of nations that reject the future; I'm confident that our states, cities, and businesses will step up and do even more to lead the way, and help protect for future generations the one planet we've got."

John Kerry, Obama's secretary of state and a key player in crafting the Paris agreement, also denounced the U.S. withdrawal as "a self-destructive step that puts our nation last."

"This is an unprecedented forfeiture of American leadership which will cost us influence, cost us jobs, and invite other countries to walk away from solving humanity's most existential crisis," he said in a statement Thursday. "It isolates the United States after we had united the world."

Just in from John Kerry: "The President who promised 'America First'" has taken a self-destructive step that puts our nation last.” pic.twitter.com/C2aTbvoR1c

Even before Trump announced his final decision, Democrats in the U.S. decried withdrawal as "a low point in modern American leadership," as Rep. John Garamendi, D-Calif., put it.

On Wednesday, Sen. Kirsten Gillibrand, D-N.Y., wrote on Twitter that it would be "catastrophic for the President to cede our leadership on this issue."

Some Republicans in Congress, including several representing districts particularly vulnerable to the effects of climate change, also rebuked reports of Trump's decision. "Climate change is a serious issue," tweeted Rep. Vern Buchanan of Florida — with a photo of development near a Florida beach.

In a tweet Thursday, Tesla founder and CEO Elon Musk announced that Trump's withdrawal from the deal means Musk will be withdrawing, as well — from the president's business advisory council.

Am departing presidential councils. Climate change is real. Leaving Paris is not good for America or the world.

But GOP Sen. James Inhofe of Oklahoma strongly defended the decision to leave the accord.

"The main thing is, it's something that we couldn't do; it'd be impossible to do," he told Here & Now. "It's necessary, then, to make sure that we don't have a bunch of people out there suing us because we're not doing what the president said we're supposed to do."

And in a statement, House Majority Leader Kevin McCarthy applauded the move, calling it the "right call":

"The previous Administration refused to recognize that private innovation and American natural gas have achieved more than government mandates and misguided international agreements — and that naiveté led President Obama to sign a climate deal that will impose great costs with little gain. President Trump made the right call in leaving a deal that would have put an unnecessary burden on the United States."

Reaction from beyond U.S. borders

Immediately after Trump's speech, France, Germany and Italy issued a joint statement announcing that the accord could not be renegotiated, as Trump said he would try to do.

French President Emmanuel Macron spoke to Trump briefly by phone, expressing that fact directly to him and saying France would no longer be working with the U.S. on climate issues, The Associated Press reports.

"The Secretary-General remains confident that cities, states and businesses within the United States — along with other countries — will continue to demonstrate vision and leadership by working for the low-carbon, resilient economic growth that will create quality jobs and markets for 21st century prosperity," the spokesman said in a statement.

The United States' northern neighbor weighed in as well.

"Canada is deeply disappointed at the U.S. position," the country's environment minister, Catherine McKenna, told reporters Thursday. "The Paris agreement is a good deal for Canada, and it's a good deal for the world. No one country can stop action on climate change."