Accessibility links
Trump Asks Supreme Court To Reinstate Travel Ban On 6 Majority-Muslim Nations : The Two-Way The Trump administration is seeking to reinstate a ban on travel to the U.S. from six majority-Muslim countries. The ban's challengers will have until June 12 to respond to the government's petition. 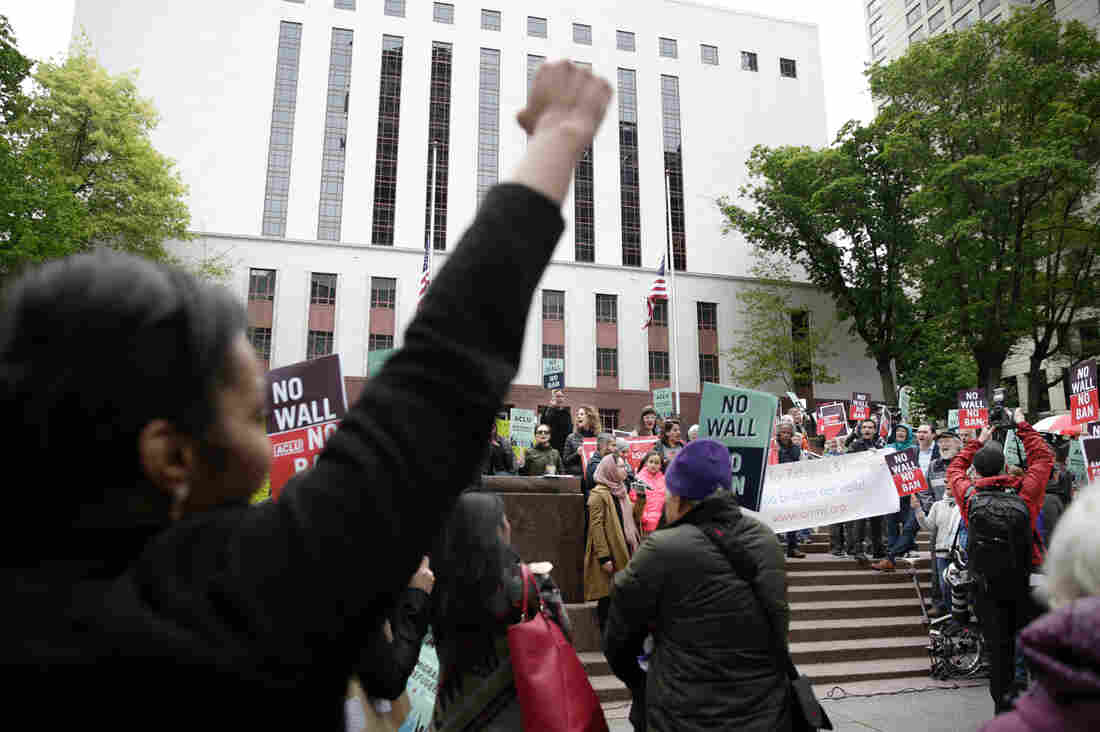 Protesters gather outside the 9th U.S. Circuit Court of Appeals in Seattle last month as judges prepare to hear arguments on the revised travel ban. This week, the Justice Department took its challenge to blocks on the ban to the U.S. Supreme Court. Jason Redmond/AFP/Getty Images hide caption 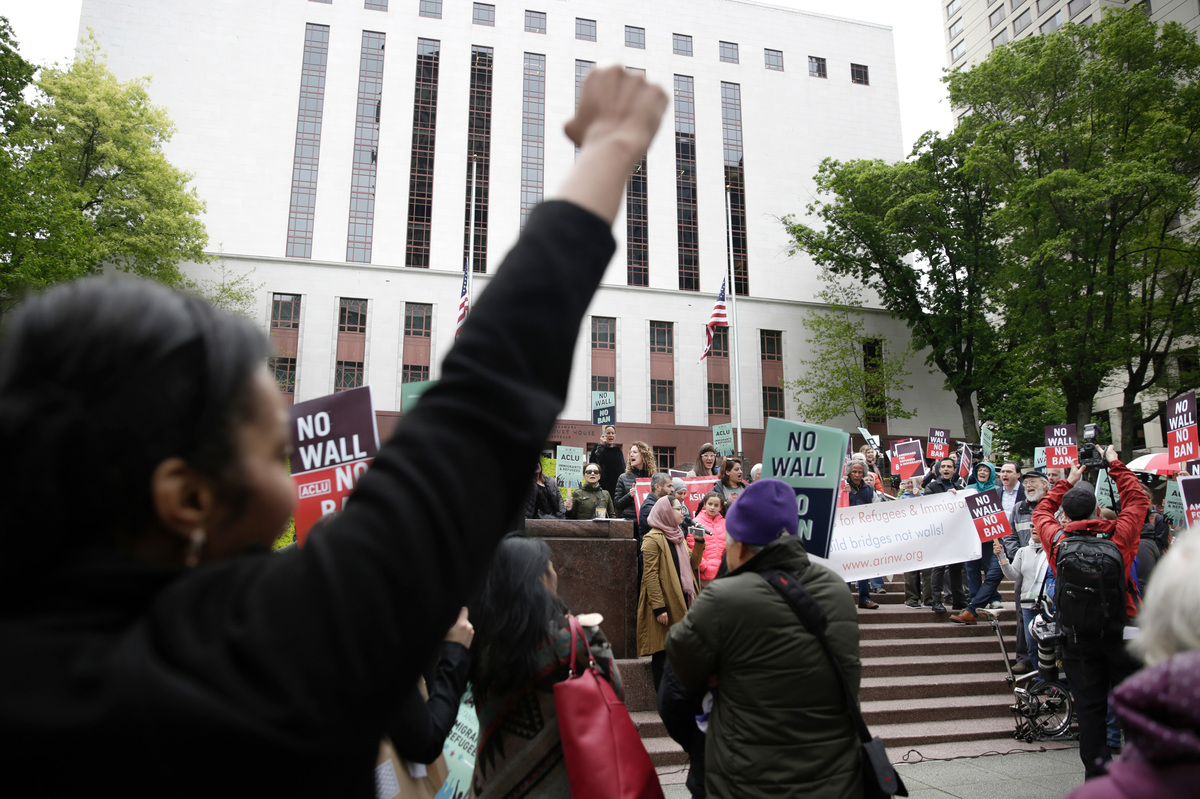 Protesters gather outside the 9th U.S. Circuit Court of Appeals in Seattle last month as judges prepare to hear arguments on the revised travel ban. This week, the Justice Department took its challenge to blocks on the ban to the U.S. Supreme Court.

President Trump's administration filed a petition with the U.S. Supreme Court on Thursday night seeking to reverse rulings by lower courts in Hawaii and Maryland that blocked a temporary ban on travel to the United States from six majority-Muslim countries.

The Trump administration says the Constitution gives the president "broad authority to prevent aliens abroad from entering this country when he deems it in the nation's interest."

On Friday, the Supreme Court set a June 12 deadline for the travel ban's challengers to respond to this petition.

Federal judges issued a nationwide temporary restraining order and injunction that blocked the travel ban in March, after separate legal challenges were mounted by the International Refugee Assistance Project, which filed its suit in Maryland, and by the state of Hawaii.

Last month, the Maryland District Court's preliminary injunction was upheld by the 4th U.S. Circuit Court of Appeals, with the chief judge writing that the travel ban "drips with religious intolerance, animus, and discrimination."

The 9th U.S. Circuit Court of Appeals heard arguments on May 15 regarding the administration's request for a stay pending appeal to lift the Hawaii injunction, but it has not ruled.

Trump and the Justice Department are asking the Supreme Court to review the case in the 4th Circuit and to place stays on the injunctions that resulted from both cases. The administration made three filings with a total of more than 880 pages late Thursday.

The executive order was issued in early March. It "suspends for 90 days the entry of foreign nationals from six countries that sponsor or shelter terrorism (Iran, Libya, Somalia, Sudan, Syria, and Yemen)," the White House says in its Supreme Court filing.

"We have asked the Supreme Court to hear this important case and are confident that President Trump's executive order is well within his lawful authority to keep the nation safe and protect our communities from terrorism. The president is not required to admit people from countries that sponsor or shelter terrorism, until he determines that they can be properly vetted and do not pose a security risk to the United States."

Trump's executive order calls for a "worldwide review" of the visa process to take place during the three months of the travel ban. It would also suspend the U.S. Refugee Admissions Program for 120 days and lower the maximum number of refugees who can enter the U.S. in 2017.

The two cases in question both sought to block the travel ban — but the Hawaii case also resulted in the court's blocking the Trump administration's plan to suspend the Refugee Admissions Program and cut the number of refugees.

In its Supreme Court filing, the Justice Department says, "Respondents barely mentioned any of these provisions in seeking to restrain the Order."

The contested executive order is a revised version of Trump's first attempt at a travel ban, which was issued during his first week in office and sparked a lawsuit led by Washington state. The temporary travel ban created chaos at airports both in the United States and abroad, as officials grappled with ambiguous instructions on whether and whom to admit to the country.

A U.S. District Court judge in Seattle blocked the executive order. The Justice Department appealed to the 9th Circuit, which upheld the lower court's injunction.

After first pledging to take the case to the U.S. Supreme Court, the president issued a revised executive order on March 6 in an effort to address objections raised by the Seattle judge.