Accessibility links
U.K. Election: Exit Polls Show Theresa May's Conservative Party Losing Majority : The Two-Way If the projections are correct and the Conservatives lose their majority, May could remain prime minister. But it would require a coalition with other parties. 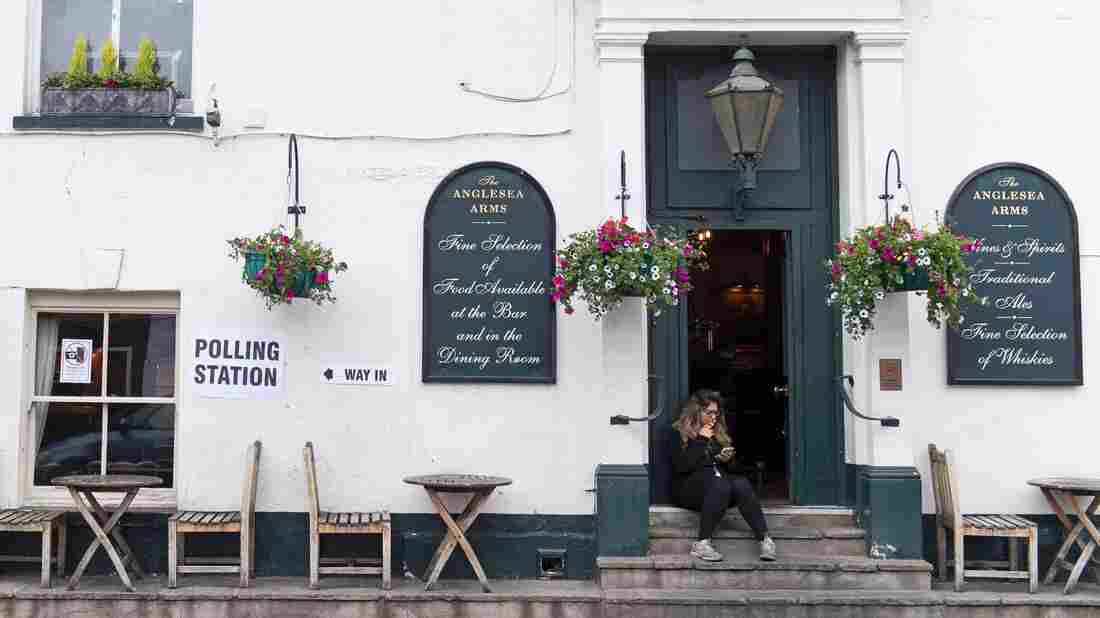 A woman sits outside the Anglesea Arms pub, set up as a polling station during Britain's general election, in London on Thursday. Justin Tallis/AFP/Getty Images hide caption 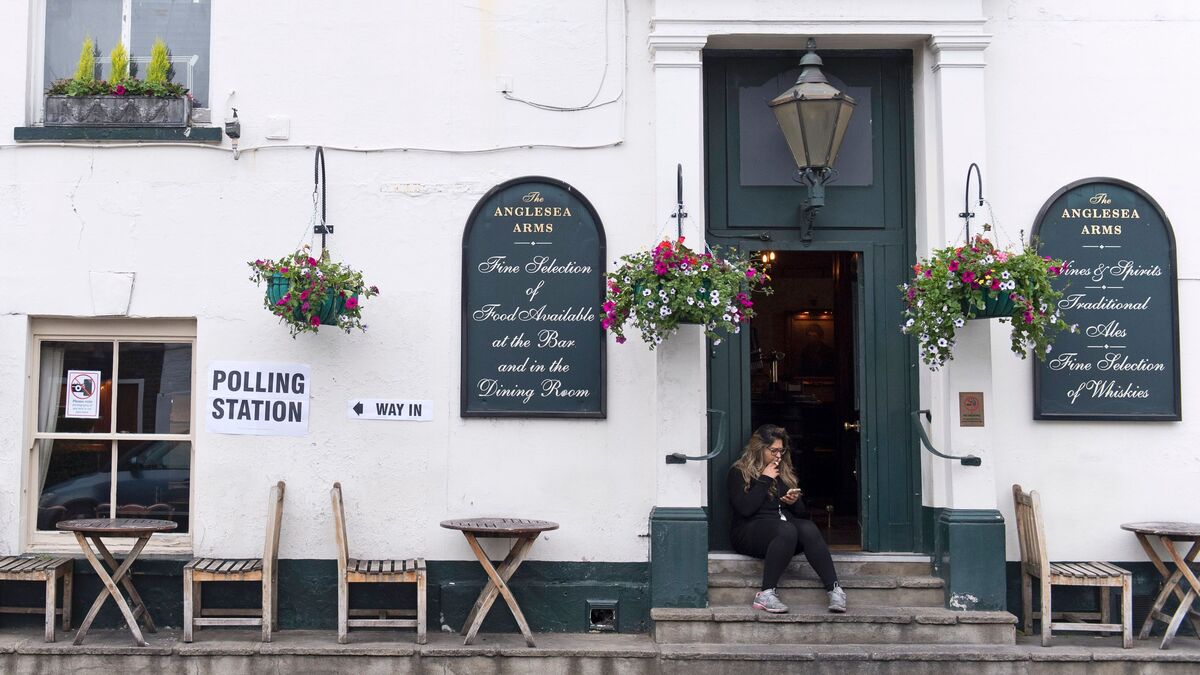 A woman sits outside the Anglesea Arms pub, set up as a polling station during Britain's general election, in London on Thursday.

Exit polls are projecting a loss of Conservative seats in the U.K. general election, in a blow to Prime Minister Theresa May and her party. Reuters reports that May will win 314 seats, short of the 326 needed for a majority in the 650-seat Parliament, according to exit polls released after voting ended Thursday.

If the projections are correct and the Conservatives lose their majority, May could remain prime minister. But it would require a coalition with other parties.

"If the poll is anything like accurate, this is completely catastrophic for the Conservatives and for Theresa May," former British Finance Minister George Osborne told ITV News, according to Reuters. "It's difficult to see if these numbers were right, how they would put together the coalition to remain in office. But equally it's quite difficult looking at those numbers to see how Labour could put together a coalition, so it's on a real knife edge."

The pound fell sharply, losing more than two cents against the dollar, after exit polls showed the Conservatives failing to keep their majority, The Associated Press reports.

NPR's Eleanor Beardsley, who watched the results from London, told All Things Considered that many in the room of journalists and political scientists where she was "gasped and even yelled" when the results came in, "it was so shocking that she lost this many seats."

Beardsley said that if projections hold, May will have to put together a coalition to govern, and a hung Parliament is possible. Just a month ago, Beardsley said, May was talking about winning a 100-seat majority.

Exit polls also projected major losses by Scottish nationalists, according to the AP, a hindrance to their plan to vote for independence.

May called for the snap election two months ago, and at the time, her party was expected to win by wide margins. In polls leading up to the campaign's final day, May's lead over Labour Party leader Jeremy Corbyn was seen shrinking to 6 percentage points. Voting closed at 10 p.m. BST — or 5 p.m. ET.

May's Tories had been hoping to build on their small majority in the House of Commons, where they hold 330 of 650 seats. Explaining the surprise election announcement in April, she called it the "only way to guarantee certainty and stability for the years ahead."

Thursday's vote took place less than two weeks before the U.K. is to begin formal negotiations on leaving the European Union — the same issue that brought May into office last July, after the resignation of fellow Conservative David Cameron.

While the subject of Brexit was a main issue when the vote was scheduled, much of the campaign has focused not on Brexit, but on security after high-profile attacks on public spaces in Manchester and London. And in recent weeks, the Conservative Party's lead in polls has been cut in half.

"The third terrorist attack on May's watch has weakened her, especially after it came to light that she had cut 20,000 police officers as home minister," Beardsley reports.

Responding to criticism, May said this week that she'll push for tougher policies on prison sentences and deportations.

"If our human rights laws stop us from doing it, we'll change the laws so we can do it," May said.

By contrast, Corbyn has been gaining momentum despite a widely held belief that his Labour Party won't be able to force May out of No. 10 Downing St. On Wednesday, he promised to stand up to President Trump if he's elected.

As NPR's Frank Langfitt reports, "[Corbyn] has been running a kind of Bernie Sanders-esque campaign, looking for a lot more funding for the National Health Service, which has really suffered. He's offering free higher education — so, really focusing on younger voters."

Both May and Corbyn were criticized for notable absences on the campaign trail. For May, it was her refusal to take part in a debate on BBC TV, leaving Corbyn to spar with other members of her party. For Corbyn, it was his no-show at an event touting Labour's populist message — feeding suspicions that rivals in his own party may have been working against him.

May's voice was also used against her in a protest song that hit the Top 5 on Britain's charts, as the relatively unknown group Captain Ska interspersed May's comments on social issues with chants accusing her of lying on "Liar Liar GE2017" — referring to the general election by its initials.