Scenes From #ComeyDay, As Bars Hold Watch Parties For Hearing On Trump And Russia

Scenes From #ComeyDay, As Bars Hold Watch Parties For Hearing On Trump And Russia 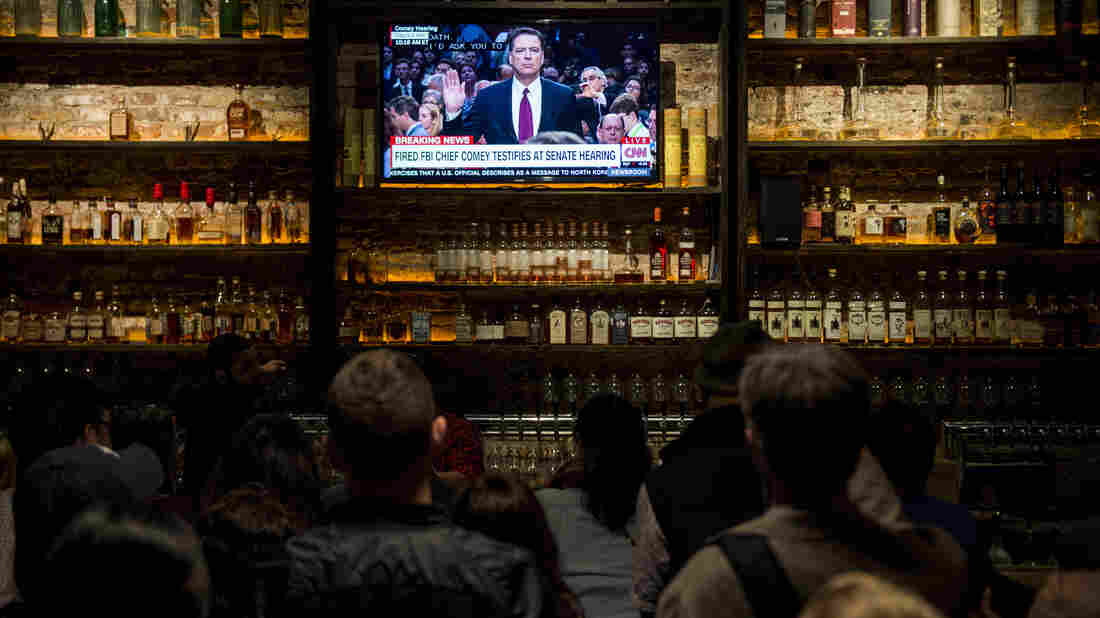 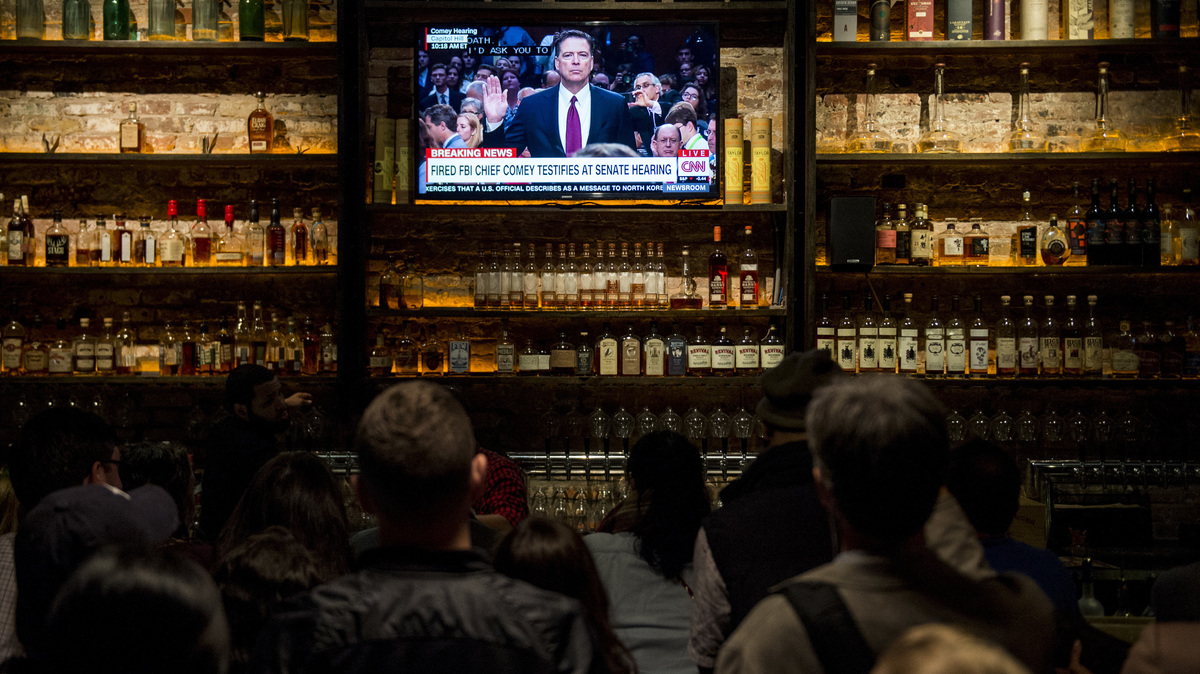 A crowd gathered for a watch party at The Partisan bar in Washington, D.C., on Thursday, as former FBI Director James Comey testified before the Senate Select Intelligence Committee.

The hearing, on Russian interference in the 2016 U.S. election and Comey's dealings with President Trump, was projected on walls and shown on TVs in sports bars, as the public looked for new details about a controversy that has dogged the Trump administration.

The line to get into Shaw's Tavern to watch the Comey trial. (It keeps going.) @wamu885 pic.twitter.com/FYfKp8nGRB

Down the street from congressional office buildings, the Capitol Lounge opened early. Washington's Union Pub offered to buy a round of drinks every time President Trump tweeted during the hearing.

Postings like that one inspired debate in some corners about whether it would look suspicious if five co-workers all called in sick. One potential patron asked the bar, "Do you have good WiFi? I might need to 'work' remotely tomorrow at the Pub!"

The president didn't tweet during the hearing, but the pub gave away a free round anyway, according to Washingtonian magazine's Benjamin Freed. He added that when Comey said to his former FBI colleagues, " I am sorry I didn't get to say goodbye to you," the patrons responded with a collective "Awww."

Comey: "I am sorry i didn't get to say goodbye to you."
Union Pub: "Awwww."
Seriously, like the live studio audience in a 90s sitcom.

"It was a packed house. Just nothing else but watching the hearing. Drinking coffee, having a cocktail in the morning," Bartender Mark Sappington, bartender told Frank Morris of member station KCUR.

Offerings included a General Flynn — a.k.a. a Moscow Mule, with vodka, lime, and ginger beer. Other drinks got a Cheetoh garnish. And on this day, a plain latte was renamed "The Recusal." 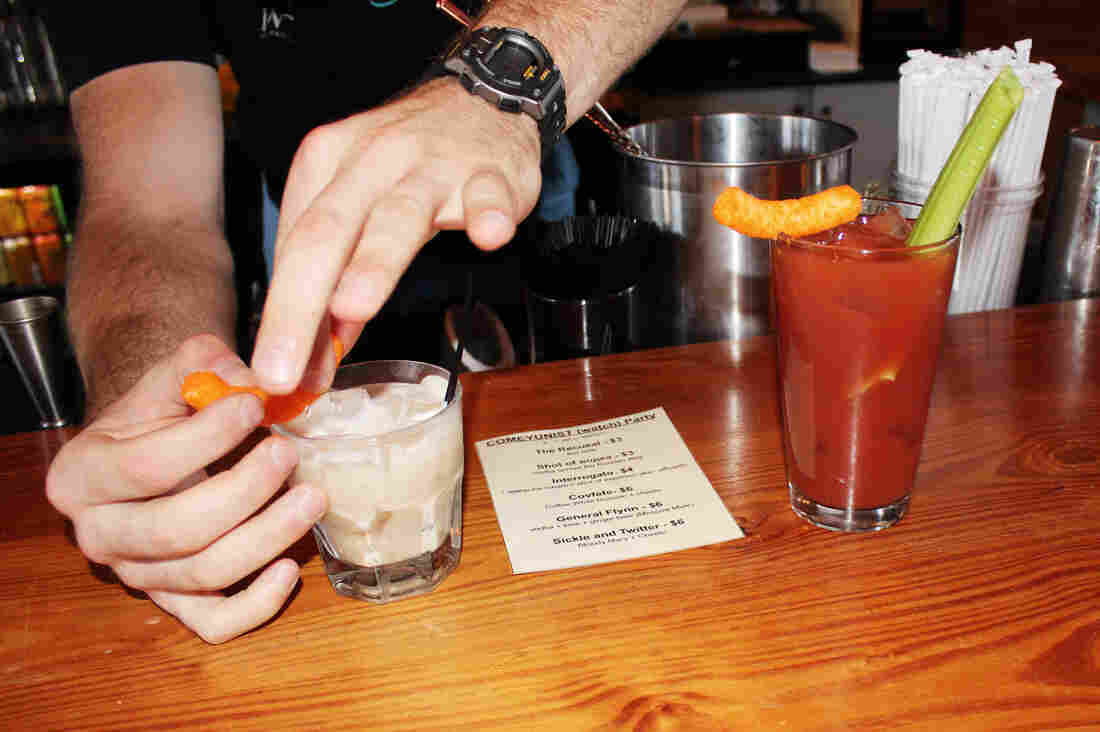 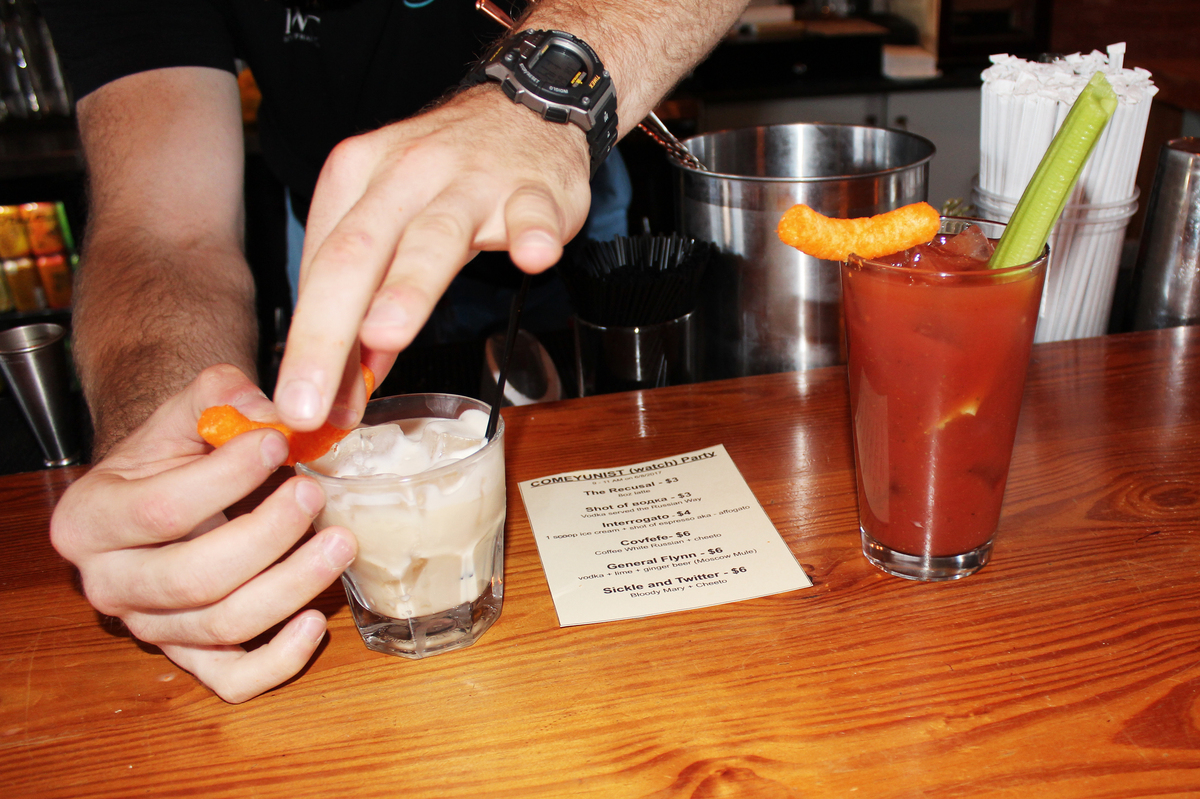 As for the hearing, Sappington told Frank, "The big thing was like, let's hear it from the horse's mouth. I mean he's under oath, let's see what Comey says."

In Philadelphia, viewers could take advantage of specials at the London Grill, which promoted its watch party by saying, "Come watch at the bar. We'll be drinking White Russians."

In Houston's Midtown district, the Axelrad Beer Garden opened early for what it called "the SUPER BOWL of Washington."

Urging customers to have "an early morning beer and engage in friendly debate with fellow patrons," the bar said it would make a drink called the Bad Hombre and serve tacos along with granola and coffee. More than 1,000 people responded via Facebook to say they were interested in going — and the bar later tweeted that the tacos were finding takers.

In Los Angeles, Tom Bergin's Irish pub opened at 6 a.m. local time — rather than its usual 5 p.m. — to host a watch party. The bar said that it's "apolitical, but that doesn't mean we can't turn on the TV when we wouldn't normally be open and drink all the Stoli Vodka that we can fit in a pint glass."

The pub calls itself "the house of Irish coffee" — but in an update this morning, Tom Bergin's posted a photo of at least four TV news vans and the caption, "Plenty of media and not enough drinkers!"

Many viewers of Comey's testimony were doing more than drinking. In the first hour of the hearing, Merriam-Webster posted a list of the trending words that people were looking up, and which had just been used in the hearing: "contemporaneous, vindicate, salacious, exfiltrate, collusion."

For those imbibing Thursday, the website PorchDrinking.com created a drinking game in which players were told to take one drink if The Washington Post is mentioned — and to take one drink with their eyes closed if the TV coverage showed someone who had clearly fallen asleep.

During the hearing, many on Twitter observed that the effects of a drinking game hinging on the phrase "I can't answer that in open session" — something Comey said repeatedly — would be devastating.

If you're looking for a guide to the players in this controversy and what's happened so far, NPR Politics has you covered.