Accessibility links
Theresa May Promises 'Certainty' After Queen Approves Plan To Form Government : The Two-Way U.K. Prime Minister Theresa May says she'll remain in office, even after her Conservative Party lost its parliamentary majority. She'll partner with another party to make up the lost seats. 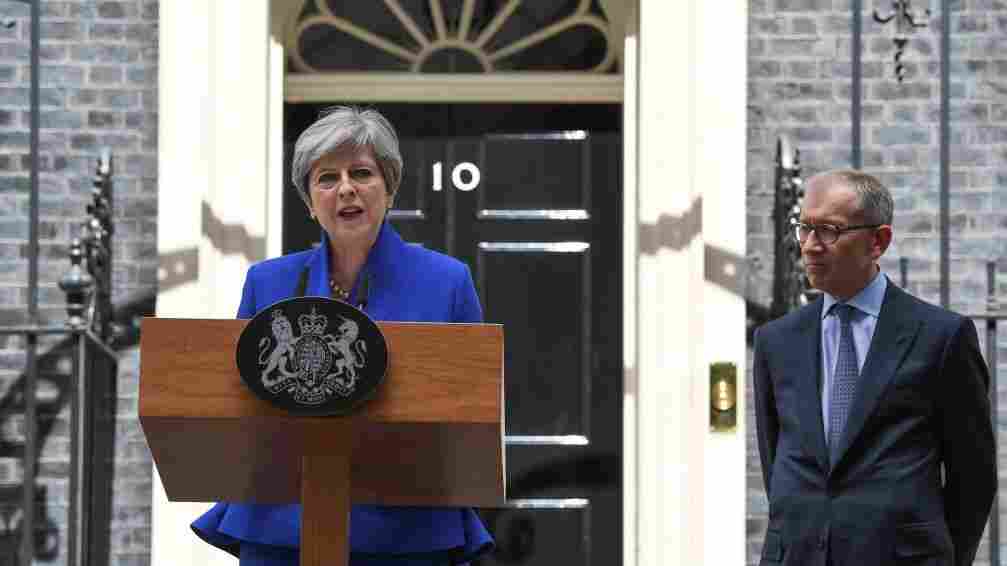 British Prime Minister and leader of the Conservative Party Theresa May, accompanied by her husband Philip, speaks outside No. 10 Downing St. in central London on Friday. Justin Tallis/AFP/Getty Images hide caption 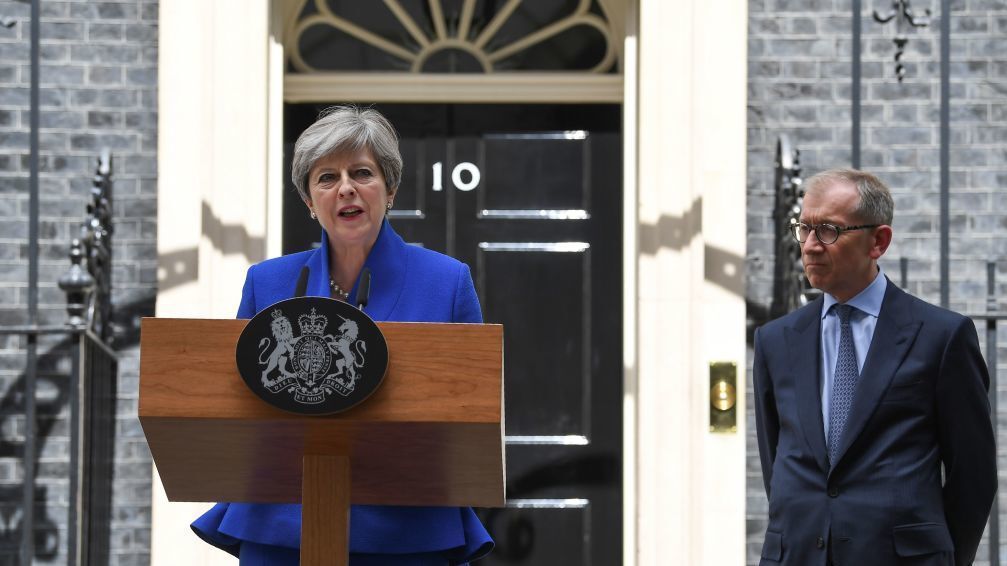 British Prime Minister and leader of the Conservative Party Theresa May, accompanied by her husband Philip, speaks outside No. 10 Downing St. in central London on Friday.

After receiving formal permission from the queen, U.K. Prime Minister Theresa May said Friday that she will forge a government after a snap-election gamble that cost her Conservative Party its parliamentary majority.

"I will now form a government," May said in front of No. 10 Downing St. moments after speaking with Queen Elizabeth II, "a government that can provide certainty and lead Britain forward at this critical time for our country."

Noting the "crucial Brexit talks that begin in just 10 days," May said the new government will work to fulfill the will of U.K. voters who decided last year to leave the European Union.

May also promised that her government will "keep our nation safe and secure," after recent attacks in London and Manchester, by "cracking down on the ideology of Islamist extremism and all those who support it and giving the police and the authorities the powers they need to keep our country safe."

In the new government, May plans to ally with the small Democratic Unionist Party in Northern Ireland.

The U.K. is facing a hung Parliament and May has resisted calls to resign, after her Tories lost 12 seats and the rival Labour Party picked up 29. One electoral district is still not final. May had called for Thursday's snap election just seven weeks ago, rather than waiting until the next scheduled national election in 2020.

"The prime minister called the election because she wanted a mandate," Corbyn said. "Well the mandate she's got is lost Conservative seats, lost votes, lost support and lost confidence. I would've thought that's enough to go, actually. And make way for a government that will be truly representative of all of the people of this country."

May took a gamble in April by calling for the snap election. She had hoped to boost the Conservatives' majority in Parliament and get a stronger mandate in negotiating the Brexit from the European Union.

But that gamble did not pay off, as concerns about social programs and security issues replaced Brexit as the main talking points in the U.K.

Now with 318 seats, May's Conservatives falls about eight seats short of the 326 needed for an outright majority in the U.K.'s 650-seat House of Commons. Corbyn's Labour Party now has 262 seats. Before the election, the Conservatives had 330 and Labour 229.

The election results create uncertainty surrounding the negotiations over Britain's exit from the European Union. Negotiations with European officials had been set to begin on June 19.

Reuters reports that Gunther H. Oettinger, a European Commission budget and human resources commissioner, expressed doubt about the talks starting as planned. The former prime minister of Finland, Alexander Stubb, tweeted, "Looks like we might need a time-out in the #Brexit negotiations. Time for everyone to regroup." Prime Minister Bohuslav Sobotka of the Czech Republic told Czech Television that "now it will be necessary to wait for who will form a government and what this government will bring to negotiations over Brexit," Reuters reports.

"We need to get started on the negotiations as soon as possible because time is ticking," German Deputy Foreign Minister Michael Roth told Germany's ZDF, according to Reuters. "Regardless of the question of who will form a government in Britain, time is ticking. ... We have less than two years to negotiate the exit ... so we should not waste any time now."

The EU wants a "legally smooth British departure" in March 2019, the wire service says. European officials are worried that the weaker position of the Conservatives make a breakdown in negotiations more likely. A stronger majority would have given May more ability to resist "hardline pro-Brexit factions in her party" and would have let her offer better terms to the EU. Some Brexit advocates want the U.K. to reject terms offered by the EU and possibly leave the union without an agreement.

"Britain will now go into its most important challenge in 40 years — extricating itself from the European Union — at a severe disadvantage," NPR's Eleanor Beardsley reports from London.

The Scottish National Party lost more than 20 seats to knock the party down to 35 seats. Nicola Sturgeon, leader of the SNP, said the results were "a disaster for Theresa May," the BBC reports. "Her position I think is very, very difficult. We have to wait and see how things shake out."

The broadcaster said Sturgeon was "disappointed at the SNP losses."

After the election, the right-wing UK Independence Party, which helped drive Brexit, was left with no seats in Parliament. "Theresa May has put Brexit in jeopardy. I said at the start this election was wrong. Hubris," Paul Nuttall told the BBC. Nuttall served as leader of UKIP until he announced his resignation Friday morning.