Accessibility links
London Grenfell Fire: At Least 12 Fatalities Reported In Massive High-Rise Blaze : The Two-Way London's Metropolitan Police say at least 12 people are dead and they expect the death toll to rise, after a massive fire engulfed most of the floors in a 24-story apartment building.

After Deadly High-Rise Inferno In London, A Search For Survivors — And Answers

After Deadly High-Rise Inferno In London, A Search For Survivors — And Answers 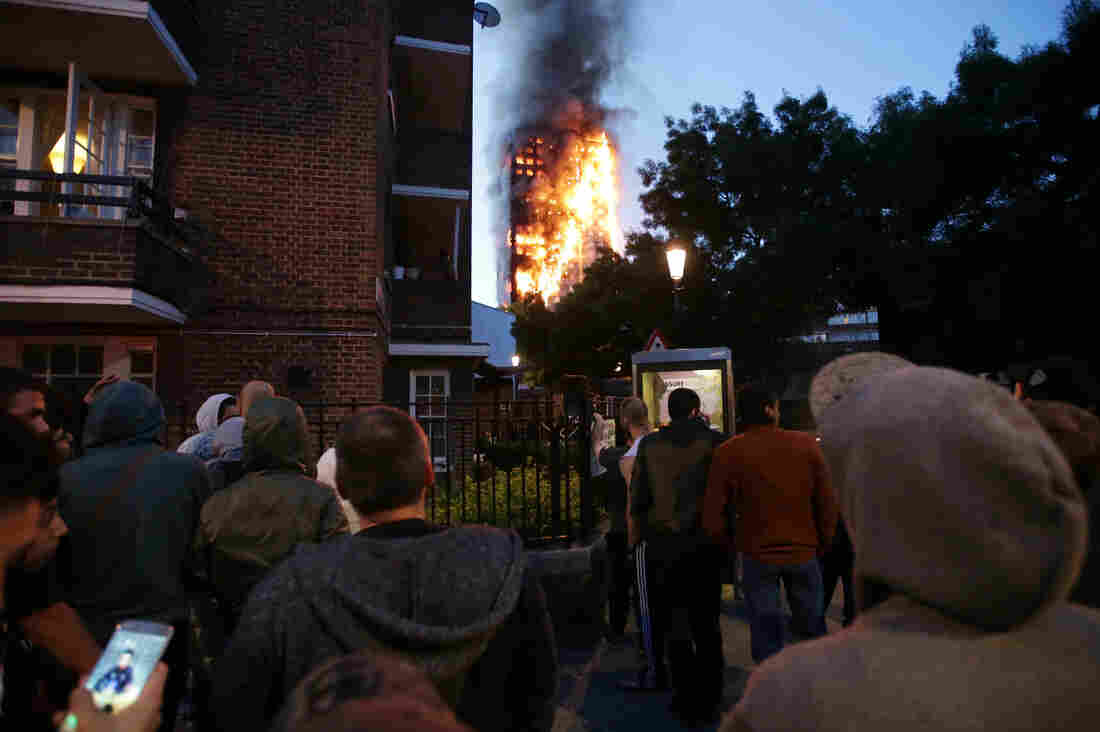 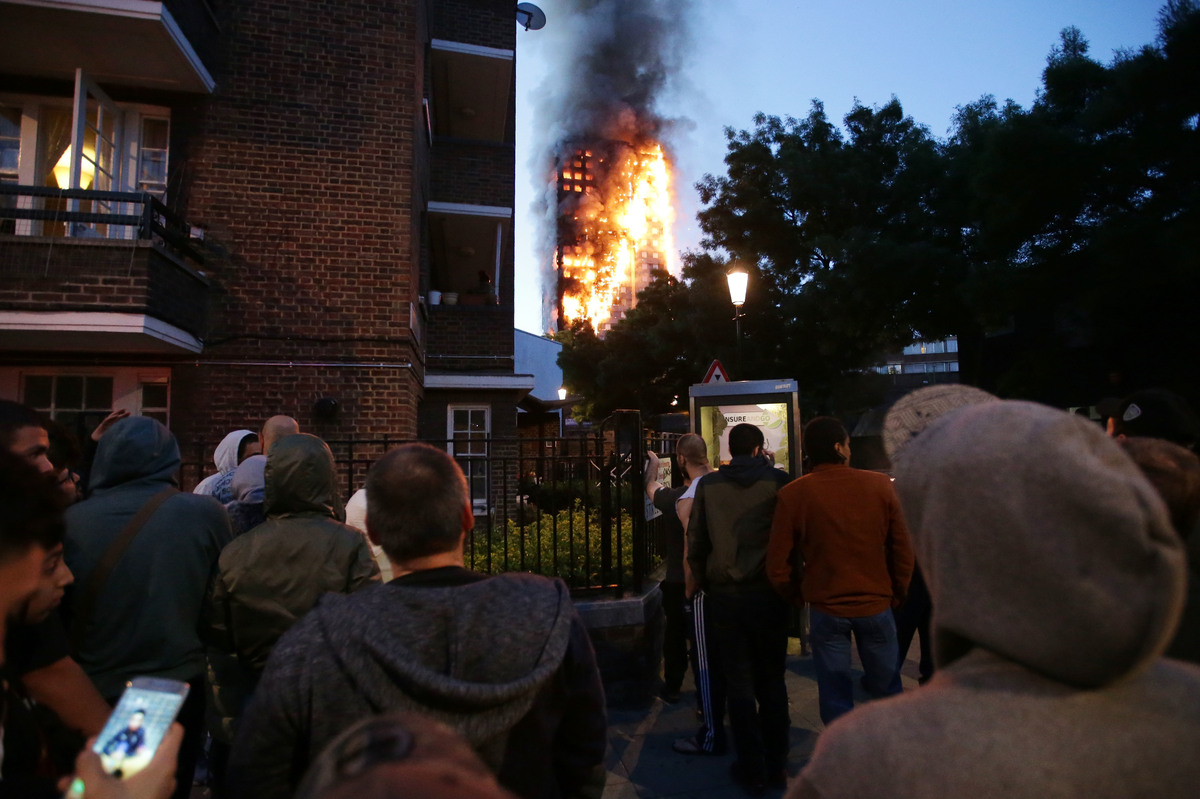 Local residents watch as Grenfell Tower is engulfed by fire on Wednesday in west London. The massive fire trapped residents inside as 200 firefighters battled the blaze.

Updated at 8 p.m. ET on Wednesday.

Fire and rescue crews are fighting a blaze and searching for people who may have been trapped in a 24-story apartment building in London that was engulfed in fire overnight. At least 12 people have died from the fire, twice the original estimate, and that number is expected to rise further, The Associated Press reports.

The fire burned uncontrolled for hours. By 11 a.m. ET, the fire had been contained but the building continued to smolder. Up to 600 people may have been inside the building's 120 apartments at the time the blaze broke out.

The blaze at Grenfell Tower was reported around 1 a.m. (8 p.m. ET Tuesday). Soon after, people nearby reported seeing smoke and flames shooting from its windows. Since then, more than 64 people have been taken to hospitals, and 20 are in critical care units, the London Ambulance Service says.

"This is an unprecedented situation, with a major fire that has affected all floors of this 24 story building, from the second floor up," said London Fire Commissioner Dany Cotton. 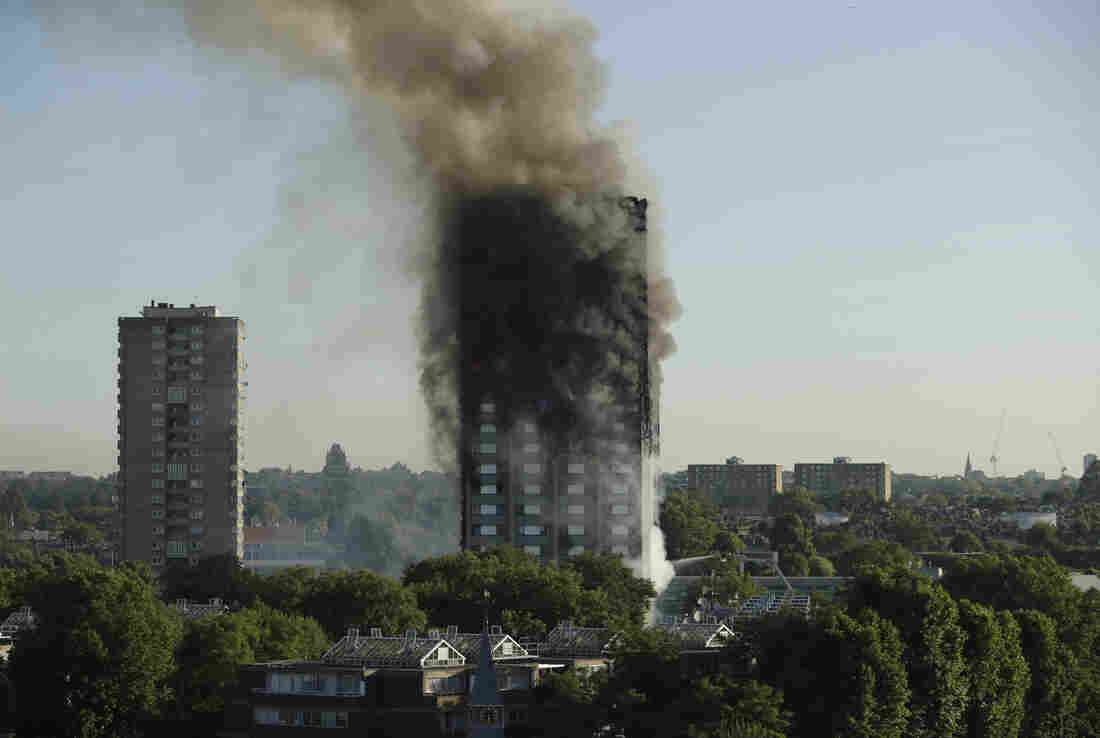 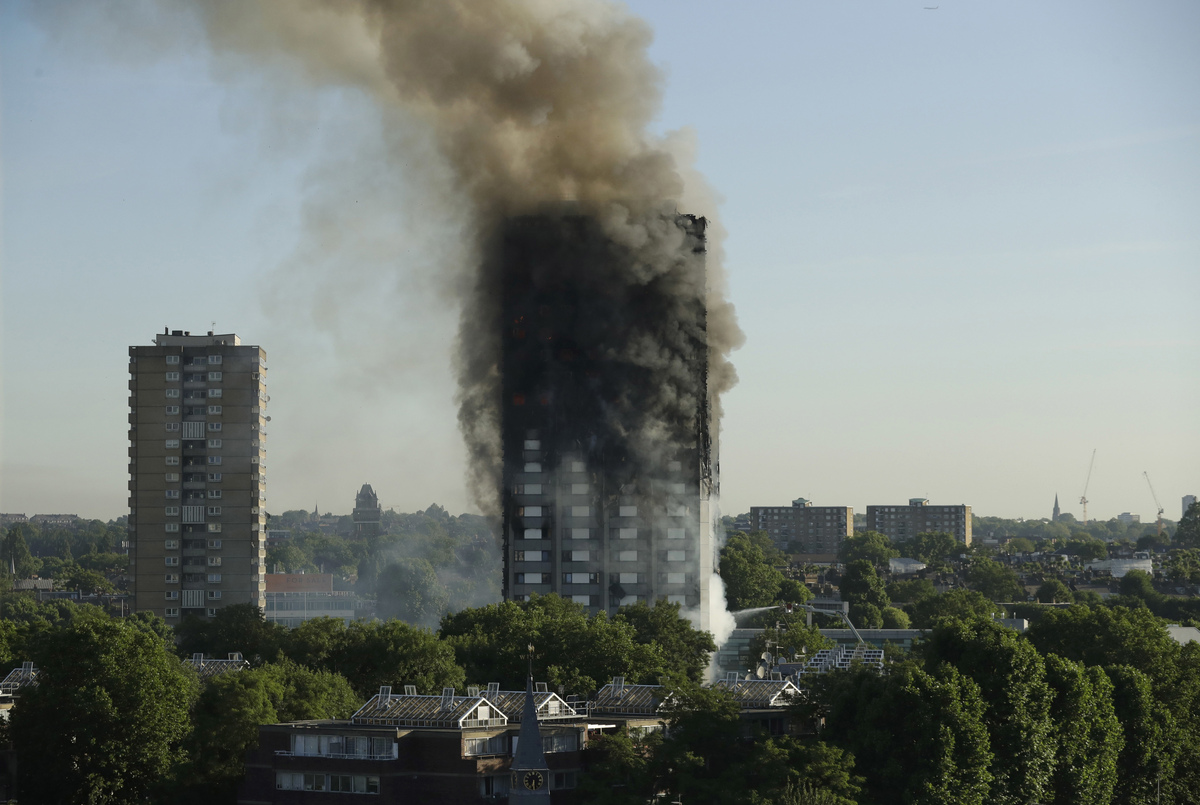 Smoke rises from the Grenfell Tower in west London on Wednesday. A massive fire raced through the 24-story high-rise apartment building overnight.

Cotton told reporters she'd never seen anything like the fire in her nearly 30 years as a firefighter.

Alex Ritson, reporting from London for NPR, says the blaze appeared to start on a lower floor of the building and spread with astonishing speed. "At its height, pretty much the entire building appear to be ablaze, with huge flames of several hundred feet running up the side of the tower," he says. "Forty fire engines and around 200 firefighters went to the scene — but their equipment didn't reach much beyond the 11th floor."

"There are already disturbing reports emerging of the pipework in the building for a fire emergency being out of action," Ritson says. "Also, the fire escape plan for the building told residents to stay in their apartments behind supposedly fire safe doors. Those who escaped the blaze were the ones who both woke up and ignored that advice."

Mickey Paramasivan, who took his children out of the building after he woke up and smelled smoke, told Ritson they made it out with just a few minutes to spare.

"I sure would have been dead if I weren't awake," he said. "Five more minutes and that was us. That's how close it was."

He described a perilous situation: "Only one fire escape to get down, and apparently that caught on fire," he said. "And the fire alarm that was going off, that wouldn't have woken no one up. It was as silent as it could be. ... Someone's got to be held responsible for this. It's ridiculous."

Eyewitness accounts describe horrifying scenes of people who could not escape from the building.

Strangers rally to support survivors of the #GrenfellTower fire by offering food, clothing and somewhere to rest https://t.co/4jzAtqpwoN pic.twitter.com/secTyahG6e

Residents who escaped spoke of others trapped and screaming for help, with some holding children from windows and others jumping from upper floors. Some were reported to have attempted to use bin bags as makeshift parachutes.

A witness, Samira Lamrani, told the British Press Association a baby was thrown from a 9th or 10th floor window and caught by a bystander.

"The windows were slightly ajar — a woman was gesturing that she was about to throw her baby and if somebody could catch her baby," Lamrani said, according to the BBC. "A gentleman ran forward and managed to grab the baby."

Lamrani said there were "endless numbers of people" trapped and "screaming for their lives."

One person, who did not want to be identified, told the British newspaper The Guardian, "I'm lucky to be alive — and lots of people have not got out of the building."

Police say it will take some time to confirm the cause of the fire, and authorities did not want to speculate on why it spread so rapidly, The Associated Press reports. 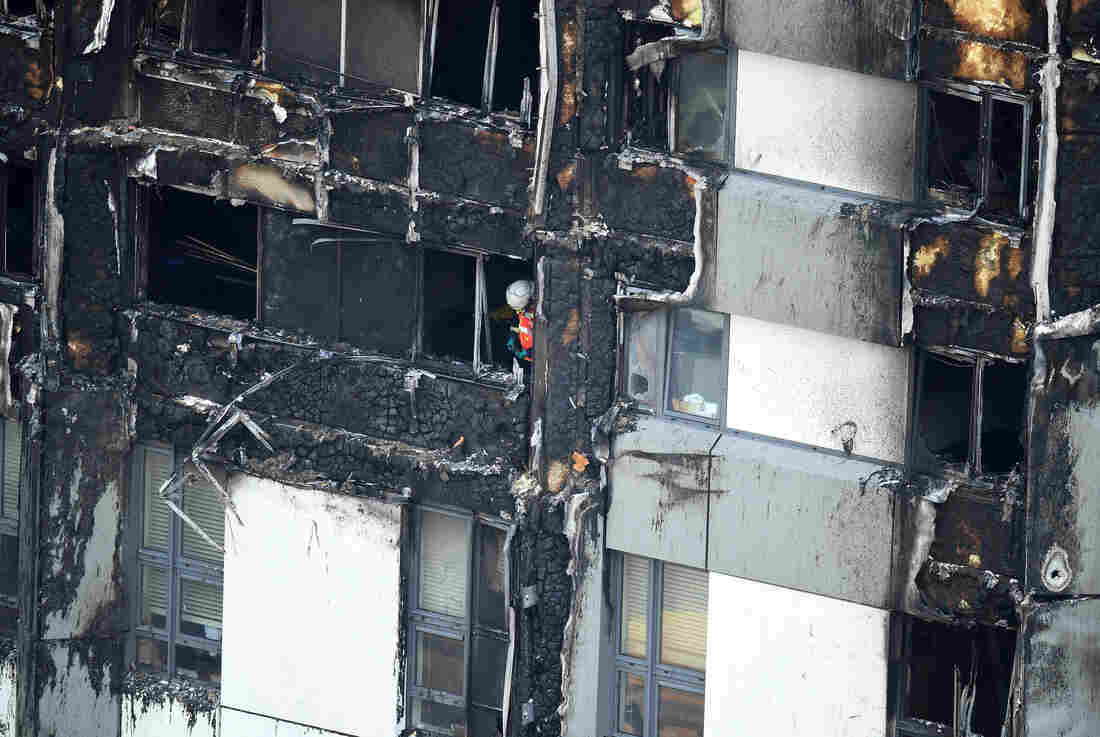 A firefighter is seen in a lower window of the burning 24-story residential Grenfell Tower block in West London on Wednesday. Leon Neal/Getty Images hide caption 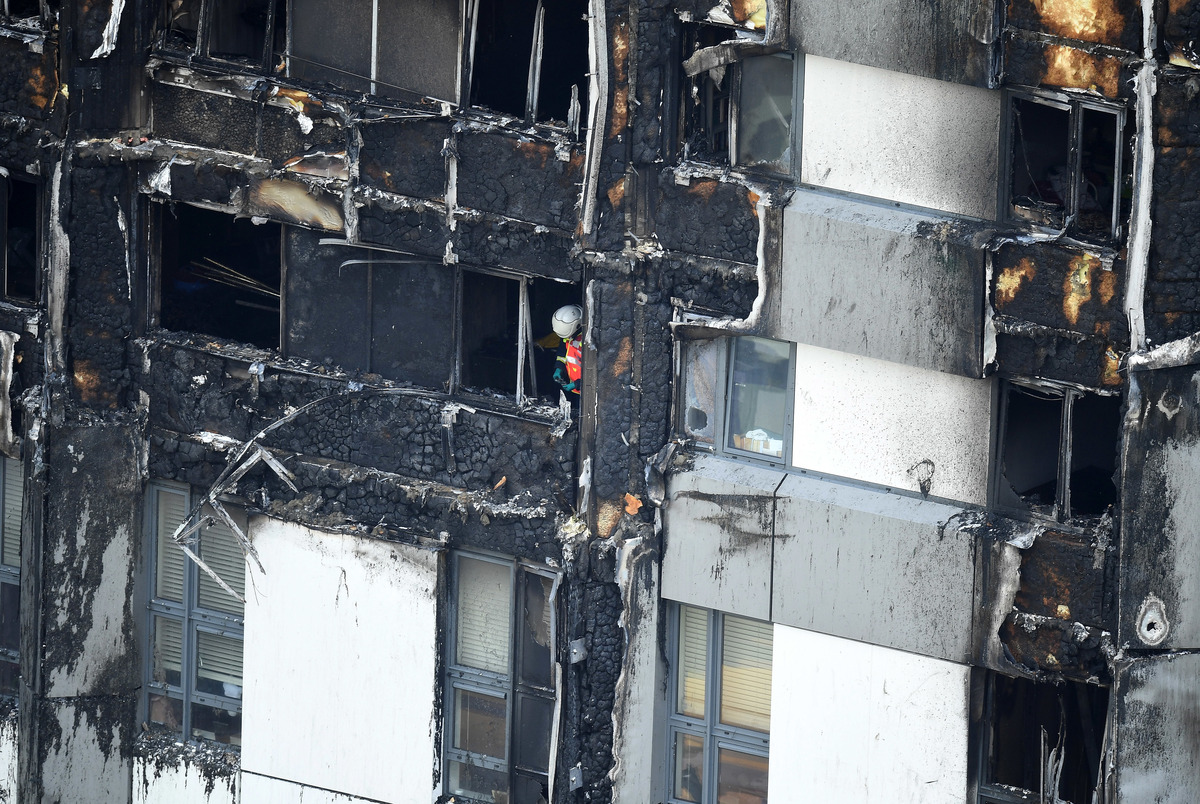 A firefighter is seen in a lower window of the burning 24-story residential Grenfell Tower block in West London on Wednesday.

As noon approached Wednesday, the building in the west London neighborhood of North Kensington was still smoldering and breaking out into flames. Volunteers were bringing sandwiches to people forced out of their homes; others donated supplies and money.

The AP reports that the building had been viewed as a fire risk:

"Local residents said they had warned local authorities about fire issues in the building, a public housing block built in 1974 and containing 120 homes, according to the Royal Borough of Kensington and Chelsea.

" 'We've complained to council,' said Edward Daffarn, 55, who said nothing had been done to improve safety. 'I consider this mass murder.' "

The building was recently refurbished at a cost of 10 million pounds ($12.8 million); the work was completed in May 2016, according to the local council, which owns the building. 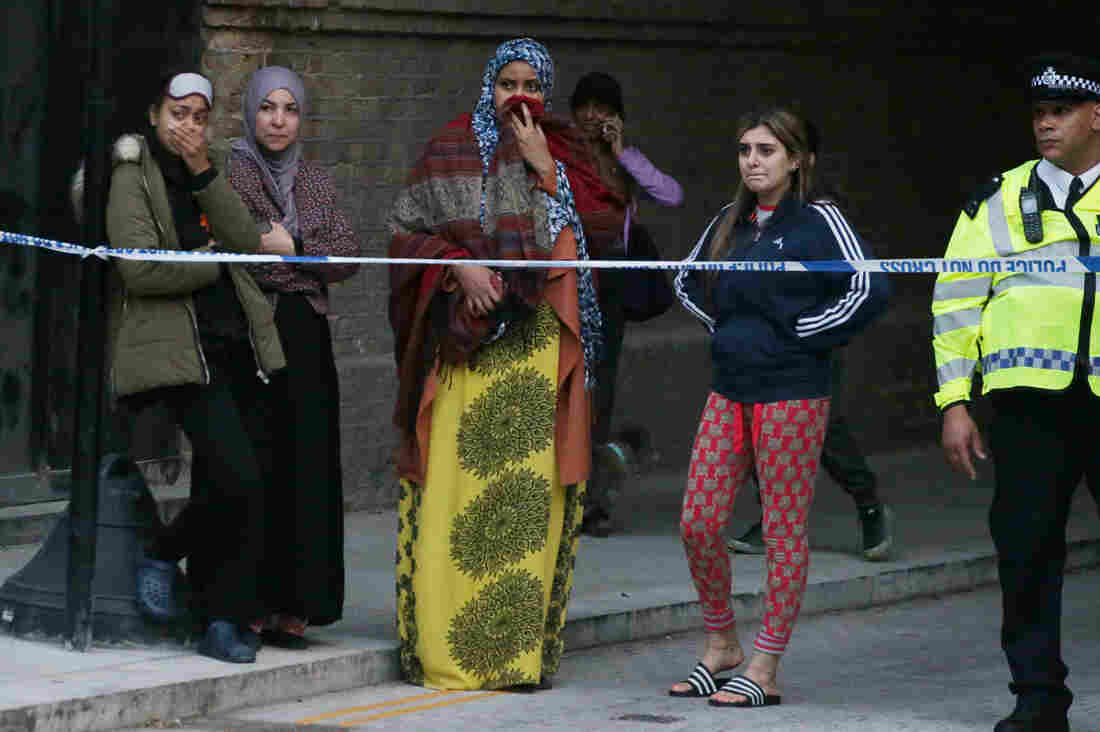 Local residents watch as Grenfell Tower is engulfed by fire on Wednesday. attempted to evacuate the concrete block and said "a number of people are being treated for a range of injuries." Daniel Leal-Olivas/AFP/Getty Images hide caption

On Twitter, London Mayor Sadiq Khan said the fire was declared a major incident; he and other city officials are spreading information about how survivors and families can find one another or report someone missing.

The borough said in a statement Wednesday night that it is providing housing and financial assistance to those affected.

"We have heard a number of theories about the cause of the fire at Grenfell Tower," it said. "All of these will be thoroughly investigated as part of the formal investigation which has already begun."

A local community organization called Grenfell Action Group said it has been calling for better fire safety in the building for years. In a post on its website Wednesday, it said "All our warnings fell on deaf ears and we predicted that a catastrophe like this was inevitable and just a matter of time."

"There is something seriously wrong with a bureaucracy that is incapable of reacting to serious negligence, affecting fire safety in a densely occupied tower block, with any sense of urgency," the group said in a post in 2013. "Does anyone actually give a damn?"