Accessibility links
Landslides And Floods Kill Scores Of People In Bangladesh And India : The Two-Way Heavy rains have overwhelmed the border region in recent days, setting a deadly amount of mud and water in motion and claiming at least 140 victims, according to disaster management officials.

Landslides And Floods Kill Scores Of People In Bangladesh And India

Landslides And Floods Kill Scores Of People In Bangladesh And India 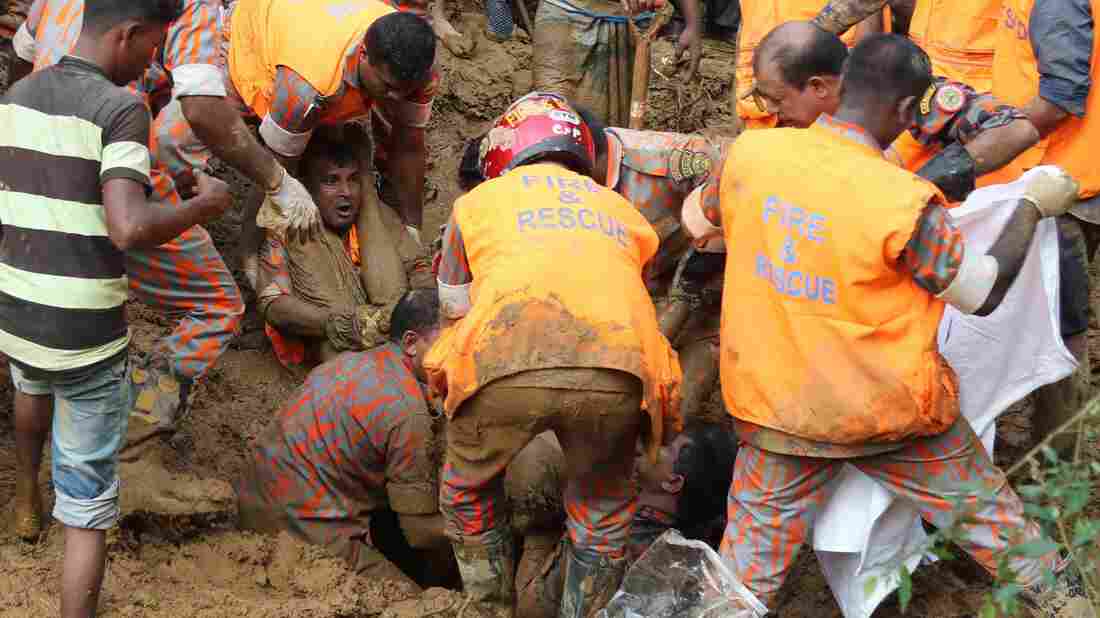 Bangladeshi firefighters pull a man from the mud Wednesday in Rangamati, after a landslide there killed scores of people. As rescue workers continue to search the area for missing people, authorities warn that the death toll is likely to rise. Stringer/AFP/Getty Images hide caption 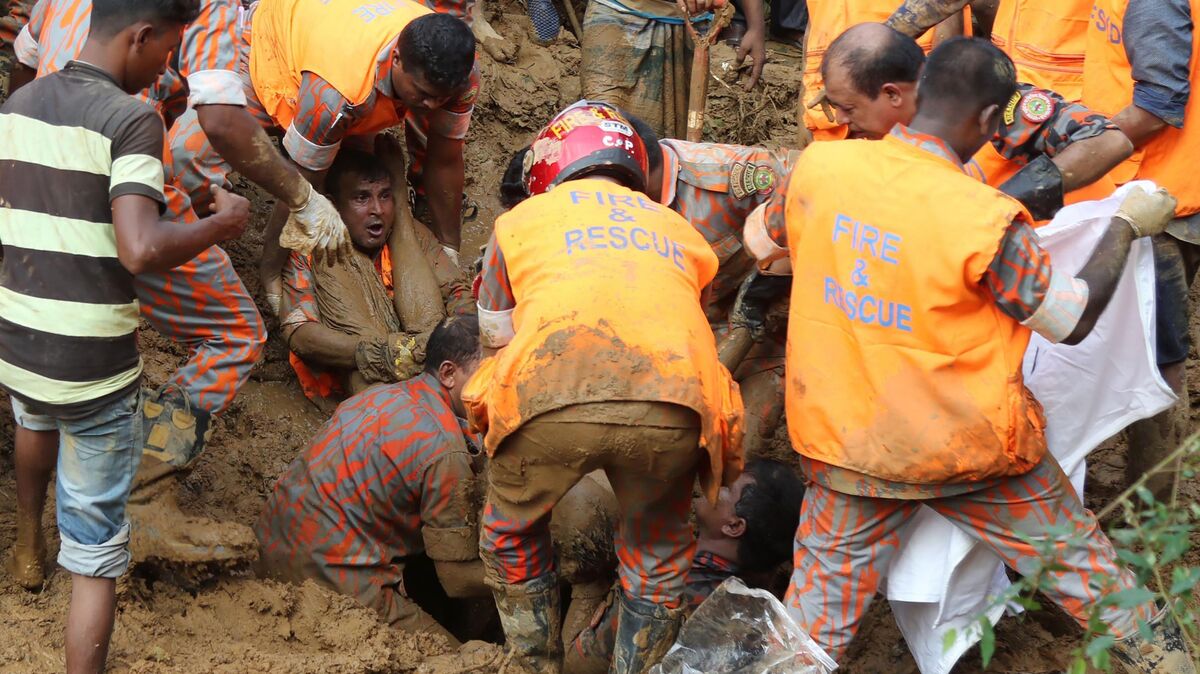 Bangladeshi firefighters pull a man from the mud Wednesday in Rangamati, after a landslide there killed scores of people. As rescue workers continue to search the area for missing people, authorities warn that the death toll is likely to rise.

In the past two days, heavy rains have triggered a deadly spate of landslides in southeastern Bangladesh. The landslides and intense flooding have claimed the lives of at least 140 people in the region, according to local authorities — and they caution that with many people still missing, the death toll could climb even higher.

It's already one of Bangladesh's deadliest natural disasters in the past decade — worse even than a 2007 landslide that killed about 130 people in the port city of Chittagong.

Hardest hit in the region is the hilly district of Rangamati, where The Associated Press reports at least 103 people were killed and at least 5,000 homes were destroyed or badly damaged.

Just over the border in India, Reuters notes that an additional 11 people died as a result of the heavy rains. In a tweet, Indian Prime Minister Narendra Modi expressed solidarity with his country's next-door neighbor and extended an offer of aid.

India stands shoulder to shoulder with Bangladesh. We stand ready to support local search and rescue efforts if required.

Bangladesh, which is now in its monsoon season and was hit just two weeks ago by deadly Cyclone Mora, found itself lashed by rains from a severe depression over the Bay of Bengal early Monday. But Al Jazeera reported from Chittagong that it isn't just these rainy conditions that are to blame for the disaster:

"These areas are prone to mud slides, but deforestation, mismanagement and land grabs have intensified this problem. The government needs to do much more in evacuation, stopping land grabs and hill cutting as well as deforestation."

The AP describes the scene:

"Rescuers were using boats to reach some areas where roads were cut off.

"Elsewhere, villagers joined firefighters and soldiers in cutting fallen trees and clearing debris in remote areas where rescuers have been unable to get heavy machinery, military spokesman Rezaul Karim said.

"The injured were being taken to area hospitals where doctors worked by candlelight.

"Hundreds of rescuers — including soldiers, firefighters, police and volunteers — were still digging through vast piles of mud in search of bodies. But authorities would not say how many people might still be missing."

At least four Bangladeshi troops were killed in the course of search-and-rescue efforts, as well — though rescue workers' dangerous labors have not gone for naught.

"We've rescued and evacuated around 2,300 people in Rangamati and Bandarban," Reaz Ahmed, director general of the Department of Disaster Management, tells reporters. "And they have been taken to safer shelters."