Accessibility links
Bill Cosby Sexual Assault Case Declared A Mistrial — But Prosecutors Vow To Retry : The Two-Way After days of deliberations, the jury could not reach a unanimous decision — but this does not spell an end to the high-profile trial. Prosecutors say they will retry the case. 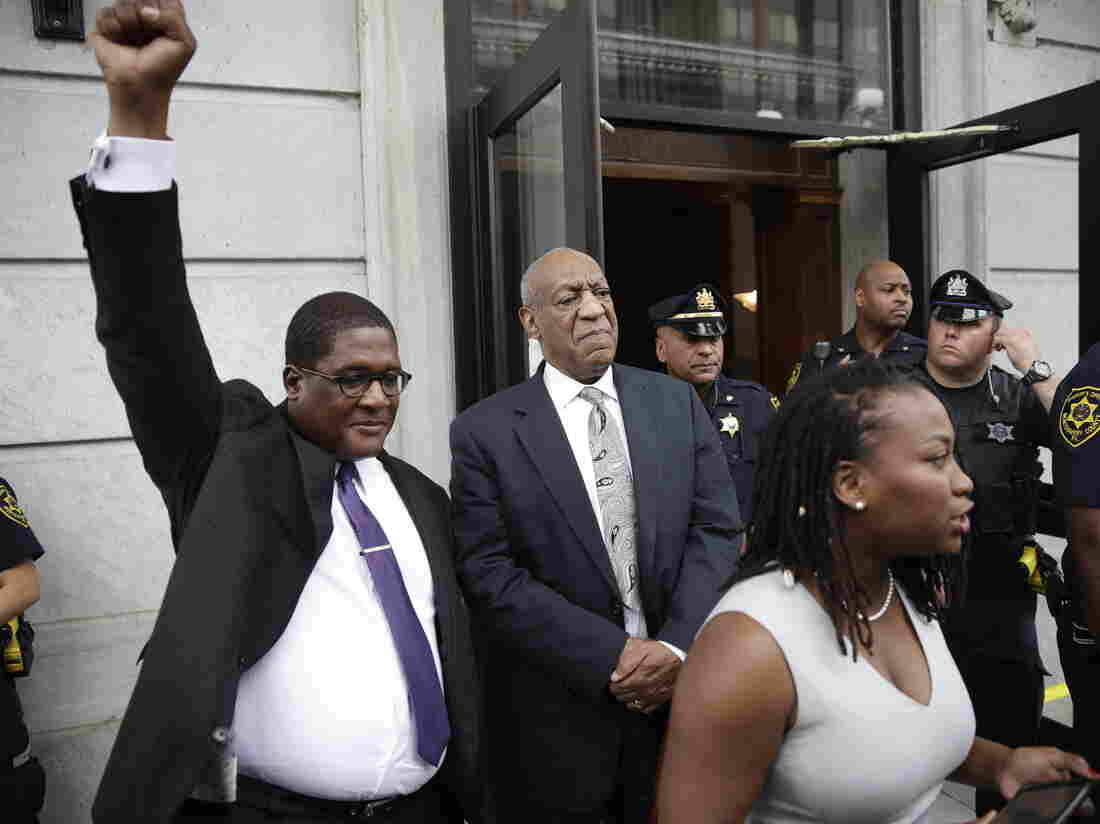 Bill Cosby looks on as spokesman Andrew Wyatt triumphantly raises his fist outside the Montgomery County Courthouse in Norristown, Pa., on Saturday. Cosby's legal and publicity team treated the mistrial as a victory, though prosecutors immediately said they plan to retry the case. Matt Rourke/AP hide caption 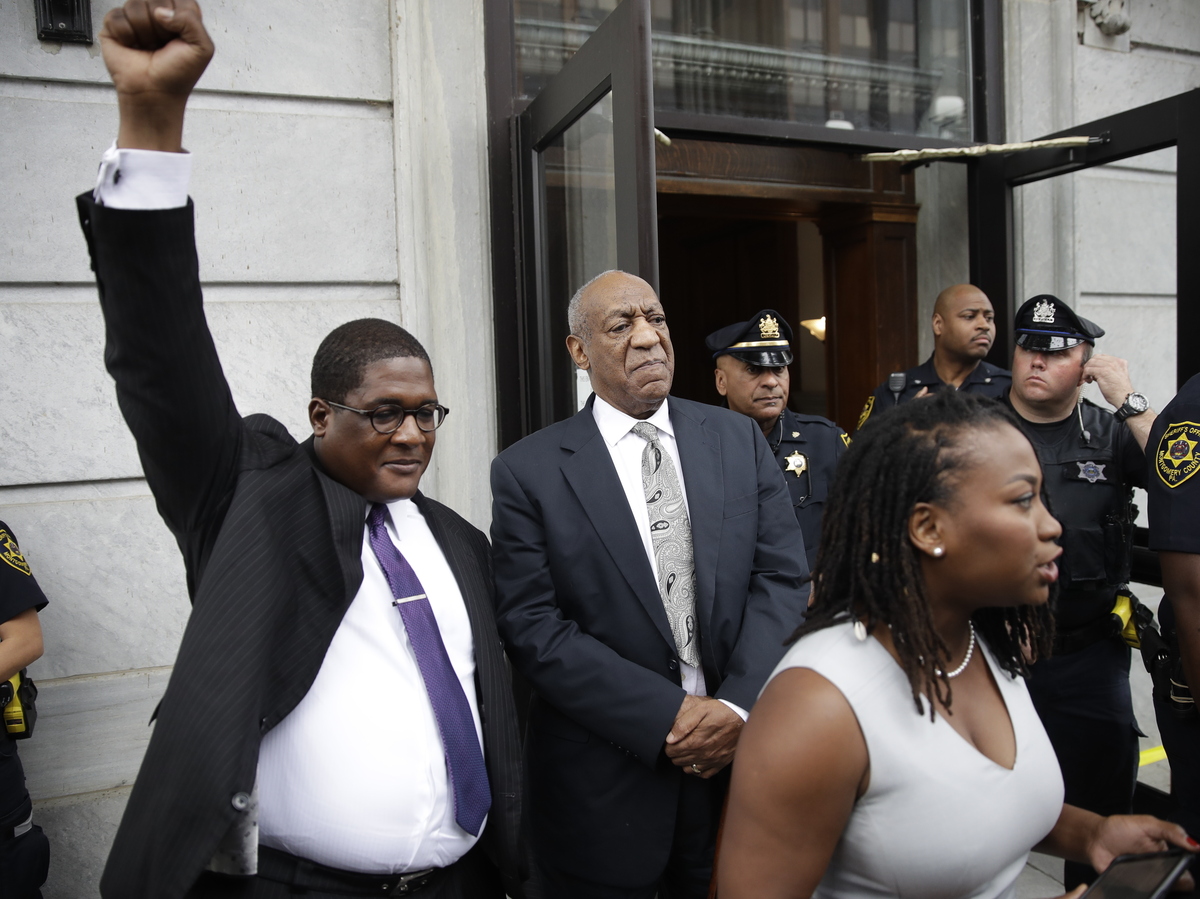 Bill Cosby looks on as spokesman Andrew Wyatt triumphantly raises his fist outside the Montgomery County Courthouse in Norristown, Pa., on Saturday. Cosby's legal and publicity team treated the mistrial as a victory, though prosecutors immediately said they plan to retry the case.

The judge in the sexual assault case of comedian Bill Cosby has declared a mistrial. After several days of deliberations, the jury could not come to a unanimous agreement on whether Cosby drugged and molested Andrea Constand, a former employee of Temple University, at his home near Philadelphia in 2004.

But this does not mean an end to the high-profile case: Prosecutors immediately said they will retry the case.

DA Steele announces we will retry this case.

Cosby, 79, remains charged with three second-degree felony counts of aggravated indecent assault, and each count carries a minimum sentence of five years in prison. All told, if found guilty, Cosby could spend the rest of his life in prison.

"I remind everyone that this is not vindication or victory," Montgomery County Judge Steven T.O'Neill said Saturday. "A mistrial is merely the justice system at work."

Nevertheless, Cosby's legal and publicity team emerged onto the front steps of the courtroom triumphant.

"Justice is alive in Montgomery County," Cosby's attorney, Brian McMonagle, said with his client standing silently behind him. "We wanted an acquittal, but like the Rolling Stones song says, you can't always get what you want; sometimes you get what you need."

And in a scathing statement read aloud by a representative, Cosby's wife, Camille, called the the district attorney "heinously and exploitatively ambitious" and the judge "overtly and arrogantly collaborating" with him — among other allegations.

Asked later whether he believes Saturday's mistrial represents a victory for Cosby, spokesman Andrew Wyatt said: "I do. I think the DA — he has to say he's going to retry. But why keep costing these citizens millions of dollars?"

Cosby spokesman Andrew Wyatt declares victory in the pouring rain, as Cosby sits in a black SUV behind him. #CosbyTrial pic.twitter.com/W0wh2C1SUB

Meanwhile, Constand's attorneys are "confident that these proceedings have given a voice to the many victims who felt powerless and silenced," they said in a statement.

"We commend those prosecutors," they continued, "who raised awareness that one of the hallmarks of drug related sexual assaults is the affect the drug has on the victim's memory and ability to recall and were nonetheless willing to present this evidence to the jury."

Andrea Constand is "entitled to a verdict in this case," District Attorney Kevin Steele said at a news conference later Saturday. "We will push forward to try to get justice done."

He says that legally, he has 365 days to retry the case but that he hopes to "push it along" sooner than that.

"You can't put a price tag on justice," Steele said, when asked by reporters about the cost of the trial. "If you do, you're saying if someone is wealthy or famous, they don't deserve the same sort of justice as everybody else."

How the case unfolded

Constand is not the only woman who says Cosby raped or sexually assaulted her. Dozens of women have come forward over the past several years, with stories that echo one another. But in most of those cases, the statute of limitations had expired by the time the women told their stories publicly. Constand's case was the exception.

She reported the crime to police in 2005 and filed a civil suit against Cosby after prosecutors declined to press charges. A decade later, as more and more women stepped forward with accounts of assault, prosecutors took a second look at the allegations and this time, filed criminal charges.

Prosecutors argued that Cosby drugged Constand to incapacitate her so he could assault her. They cited Cosby's own statements that he gave her pills and touched her sexually and called another accuser to the stand to make the case that Cosby had a pattern of drugging and assaulting women.

Cosby's defense team questioned Constand's credibility, pointing to inconsistencies in her accounts to the police, and argued that the 2004 encounter was consensual and "romantic."

The prosecution took five days to present their case; the defense, less than a day. Cosby did not testify in his own defense.

Cosby's wife, Camille, joined him in the courtroom as his defense team presented its case. Supporters and well-wishers also gathered outside the courthouse; at times during the trial, Cosby "appeared in good spirits" as he spoke to and saluted his fans, The Associated Press reports.

Jury deliberations started Monday afternoon. As the days passed, the jury repeatedly asked to rehear portions of the testimony.

On Thursday, after more than 30 hours of deliberations, the members of the jury told the judge they were deadlocked and could not reach a unanimous consensus. The judge ordered them to try again, giving them instructions meant to motivate an undecided jury to come to a conclusion.

By the time a mistrial was declared Saturday, the exhausted jurors had spent more than 50 hours in deliberations.

A growing wave of allegations

For decades, Cosby's public image seemed not just untarnished, but untarnishable. He was the star of the wildly popular The Cosby Show and a successful stand-up comic. Genial, avuncular, beloved: He was America's dad.

As NPR's Gene Demby has written, Cosby was a black luminary who served not just as a racial and cultural ambassador to white America, but also as a financial backer of black America.

"Black colleges and prospective black college students were buoyed by his philanthropy, while his collections of black art graced important museums," Gene writes. "Even before his late-career turn as black America's moral scold, Cosby had spent decades leaning into his popular image as a paternal figure to bolster his influence as a paternalistic one."

Cosby presented himself as a sort of moral leader and advocate for responsibility: His controversial "pound cake" speech excoriated poor black Americans for what he described as ignorance and poor parenting.

In Philadelphia, where he grew up, Cosby was a hometown hero. "Cosby gave money to the city, and whenever he could, his time," Annette John-Hall reported for NPR. "In the early 2000s, he participated in 'callback sessions' with public housing residents in North Philadelphia, where they would talk about education, violence and teen pregnancy, among other issues."

For Many Philadelphia Residents, Bill Cosby Is Still Their 'Hometown Boy'

But a series of allegations of rape and molestation began swirling around the edge of that reputation. In 2000, a woman accused Cosby of groping her. Then Constand's allegations drew attention in 2005.

Cosby repeatedly and vehemently denied any wrongdoing. Almost a decade passed, and no criminal charges were filed. Cosby's legacy and career survived — by early 2014, Gawker described the allegations as "effectively forgotten."

Then, in the fall of 2014, comedian Hannibal Buress mentioned the allegations in a set. He said he was annoyed by Cosby's "smug" persona: " 'Pull your pants up, black people. I was on TV in the '80s. I can talk down to you because I had a successful sitcom.' Yeah, but you raped women, Bill Cosby. ... Brings you down a couple notches."

"You leave here and Google 'Bill Cosby rape,' " Buress told the audience. "It's not funny. That s*** has more results than Hannibal Buress."

The bit went viral, and suddenly Cosby's alleged assaults were back in the news. As in 2005 and 2006, more women stepped forward with stories of assault.

But this time, the wave of allegations didn't stop, and few people seemed inclined to forget and move on.

NPR's Scott Simon asked Cosby to directly address the allegations in a November 2014 interview. Cosby responded with an attention-grabbing series of silences.

The Associated Press went to court to get access to a previously sealed deposition from Constand's civil suit against Cosby. The wire service released the document — in which Cosby admitted that he obtained quaaludes, a sedative, with the intent of giving the drug to women he wanted to have sex with.

Then 35 women told their stories to New York magazine. Side by side, the stories showed the same themes again and again: Women who saw Cosby as a mentor, a father figure or an admired celebrity. A drink or a pill. Helplessness or fear or a night entirely lost to memory. Years of silence.

Cosby has continued, through his representatives, to deny that he committed any sexual assaults — admitting to infidelity but maintaining that all the sexual contact was consensual.