Accessibility links
A Somber Queen's Speech Unveils A Brexit-Centric Agenda In The U.K. : The Two-Way The queen ditched the crown and royal robes for the speech, which lays out priorities for the new legislative session. On the agenda: Brexit, Brexit, Brexit — and a few other items, of course.

A Somber Queen's Speech Unveils A Brexit-Centric Agenda In The U.K.

A Somber Queen's Speech Unveils A Brexit-Centric Agenda In The U.K. 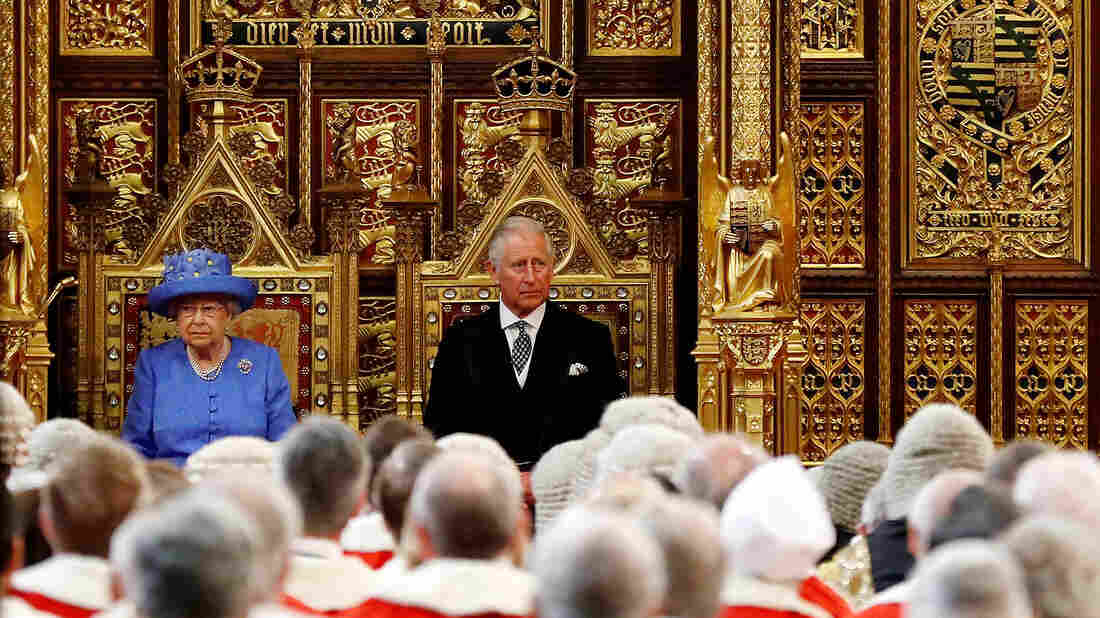 Queen Elizabeth II and Prince Charles attend the state opening of Parliament on Wednesday in London. This year, the ceremony was scaled back, with the queen arriving by car rather than carriage and not wearing the crown or robes of state. WPA Pool/Getty Images hide caption 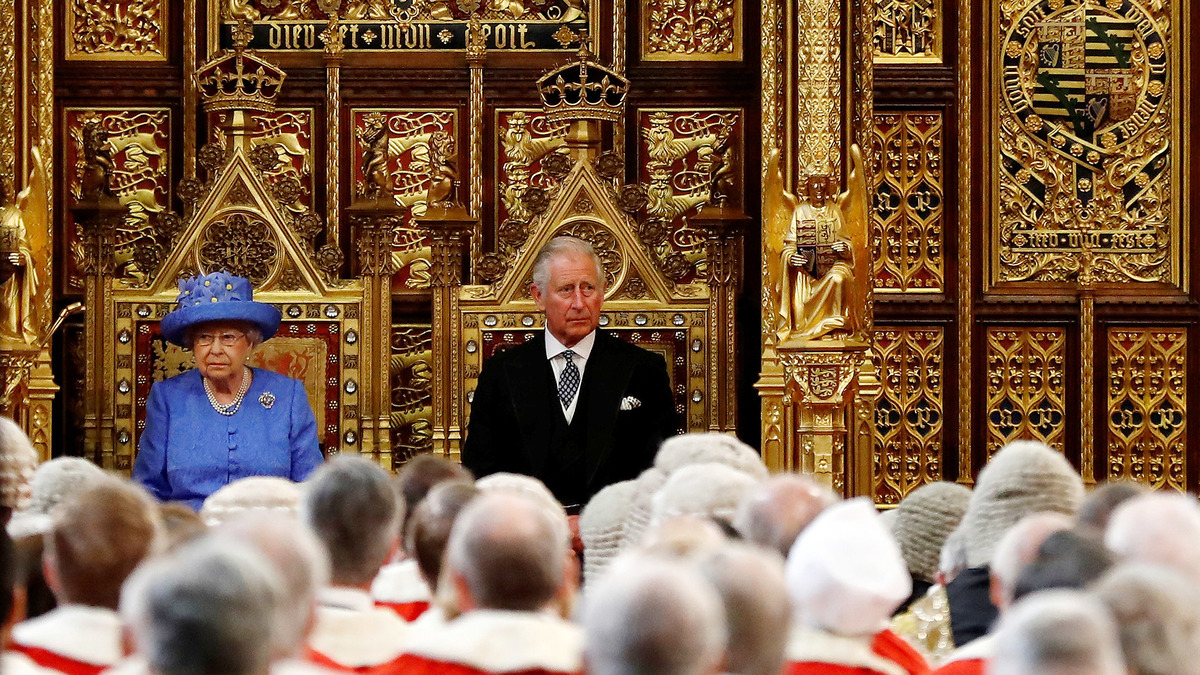 Queen Elizabeth II and Prince Charles attend the state opening of Parliament on Wednesday in London. This year, the ceremony was scaled back, with the queen arriving by car rather than carriage and not wearing the crown or robes of state.

When Elizabeth II rolled up to the Palace of Westminster on Wednesday, she did so without many of the trappings that typically attend the Queen's Speech. Declining her traditional horse-drawn carriage, keeping the imperial crown beside her rather than atop her head and swapping the royal robes for a blue dress, the queen pointedly toned down the pomp this year.

The circumstance, however — the speech's role mapping British legislative priorities for the new parliamentary session — remained as crucial and revealing as ever. In a U.K. roiled by surprising election results, terrorist attacks and the fallout from a deadly tower blaze, the Queen's Speech offered a concrete road map of the next two years under diminished Conservative leadership.

And that road map includes a whole lot of Brexit.

Of the 27 proposed bills put forth in the speech, nearly a third pertain to the U.K.'s departure from the European Union. That includes a measure to transpose current EU laws into British laws, so as not to lose them when the country leaves the international organization, as well as bills that give the U.K. autonomy in crafting new policies in immigration, trade and agriculture.

"My Government will seek to maintain a deep and special partnership with European allies and to forge new trading relationships across the globe," the queen said in prepared remarks.

For now, details on how exactly the British government will do so remain sparse, but the speech does appear to signal preparations for a clean break with the EU.

In other respects, her speech — which is shaped by the governing party's priorities — was notable for what it left out entirely. Gone was any mention of a few controversial points in the manifesto released by Conservatives before their anemic showing at the polls earlier this month — pledges such as an expansion of grammar schools and a re-examination of a ban on fox hunting.

Another detail earned notice for its absence: In a speech that traditionally notes important state visits — this time around, it was an upcoming visit from the king and queen of Spain — there was no mention of President Trump. Upon her own visit to the White House in January, Prime Minster Theresa May had agreed with Trump that he would pay a visit to the U.K. "later this year," though that visit has received its fair share of protest among Brits.

Still, one outstanding issue did receive attention in the Palace of Westminster: Grenfell Tower. The high-rise complex suffered a deadly blaze last week in which scores of people were killed and still others were stripped of their homes.

As protesters marched on the prime minister's residence in what they called a "day of rage" — a demonstration against perceived malfeasance and government inaction — the queen announced a Conservative plan to launch a "full public inquiry into the tragic fire" in order to "ascertain the causes, and ensure that the appropriate lessons are learnt." 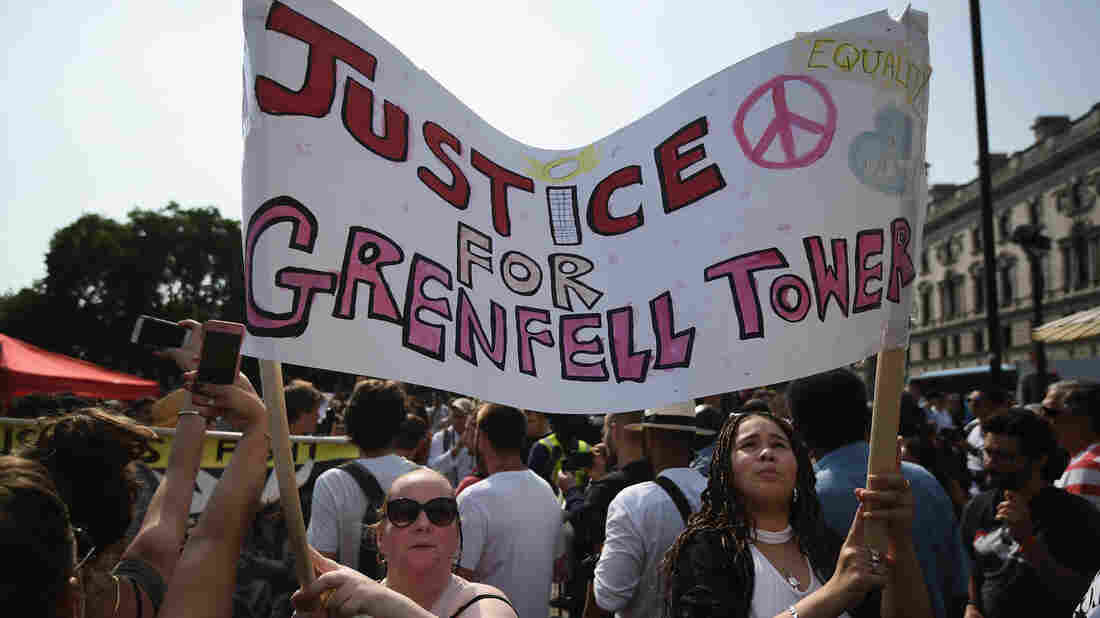 Protesters in London on Wednesday call for justice for the victims of the Grenfell Tower blaze. They joined other demonstrators in what they called a "day of rage" to protest perceived government inaction and neglect. Carl Court/Getty Images hide caption 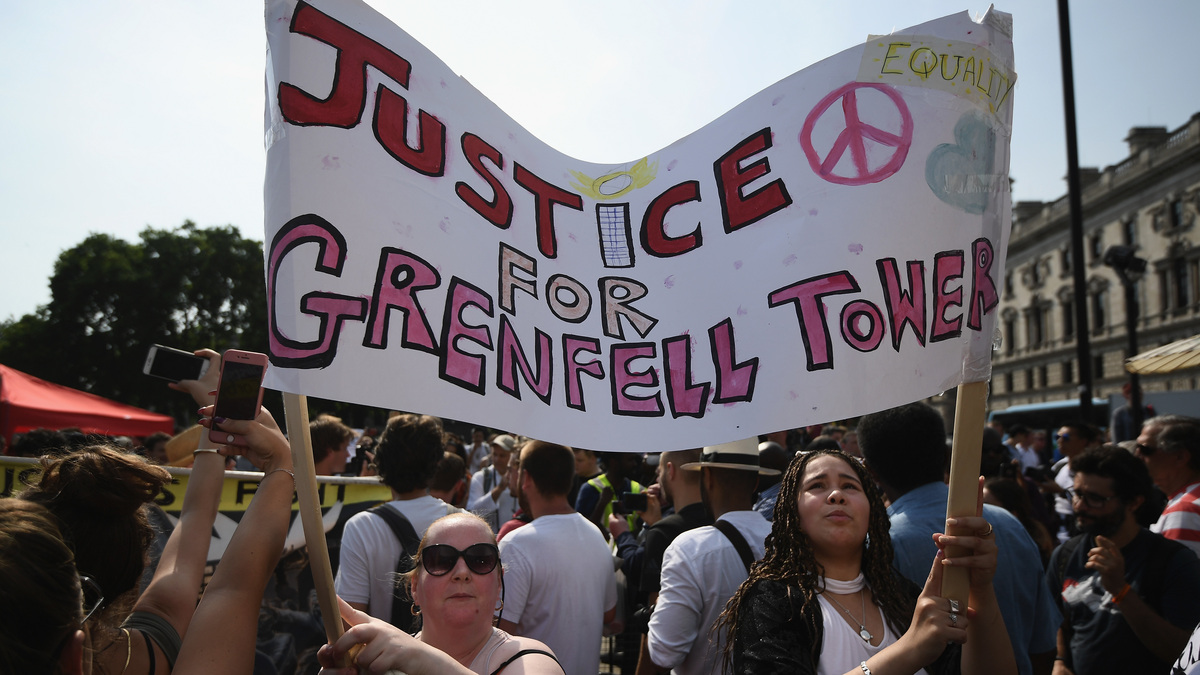 Protesters in London on Wednesday call for justice for the victims of the Grenfell Tower blaze. They joined other demonstrators in what they called a "day of rage" to protest perceived government inaction and neglect.

In a speech following the queen's, May apologized for how her government handled the aftermath of the tragedy.

"That was a failure of the state, local, and national, to help people when they needed it most," she said, according to The Guardian. "As prime minister I apologise for that failure, and as prime minister I've taken responsibility for doing what we can to put things right."

Full text of what Theresa May said in apologising for initial official response to the #GrenfellTower fire. pic.twitter.com/xHec7BE3VY

The Queen's Speech now heads to debate among May, Labour Party leader Jeremy Corbyn and other lawmakers to hash out potential amendments and eventually vote on its agenda next week.

In the meantime, onlookers both in the U.K. and abroad can content themselves that at least one of the beloved — and decidedly more eccentric — traditions of the Queen's Speech remains intact: the customary royal heckling.

For some three decades, Labour lawmaker Dennis Skinner has shouted a one-liner as the ceremony gets underway. Even amid the gravity, frustration and uncertainty surrounding this year's speech, Skinner bore the great weight of his informal duty gladly, quipping about the queen's plans to catch a horse race later that day.

"Get your skates on," he shouted, according to The Independent, "the first race is half past two."