Accessibility links
A Total Eclipse Will Sweep The U.S. In August, And People Are Going Nuts For It : The Two-Way NASA says a partial eclipse will be visible throughout the country. But within a "path of totality" from Oregon to South Carolina, an eclipse industry is booming.

A Total Eclipse Will Sweep The U.S. In August, And People Are Going Nuts For It

A Total Eclipse Will Sweep The U.S. In August, And People Are Going Nuts For It 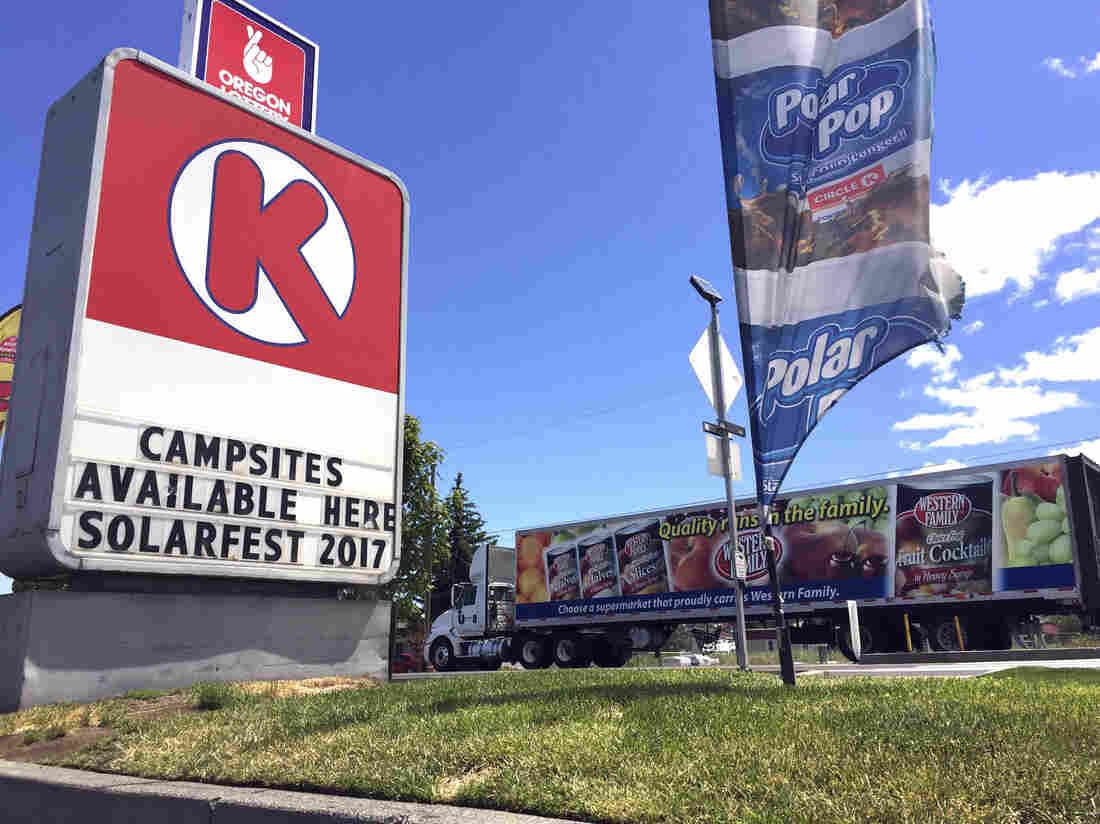 A June ad for campsites in the small town of Madras, Ore., anticipates the influx of tourists expected in the prime viewing location for the Aug. 21 total solar eclipse. Gillian Flaccus/AP hide caption 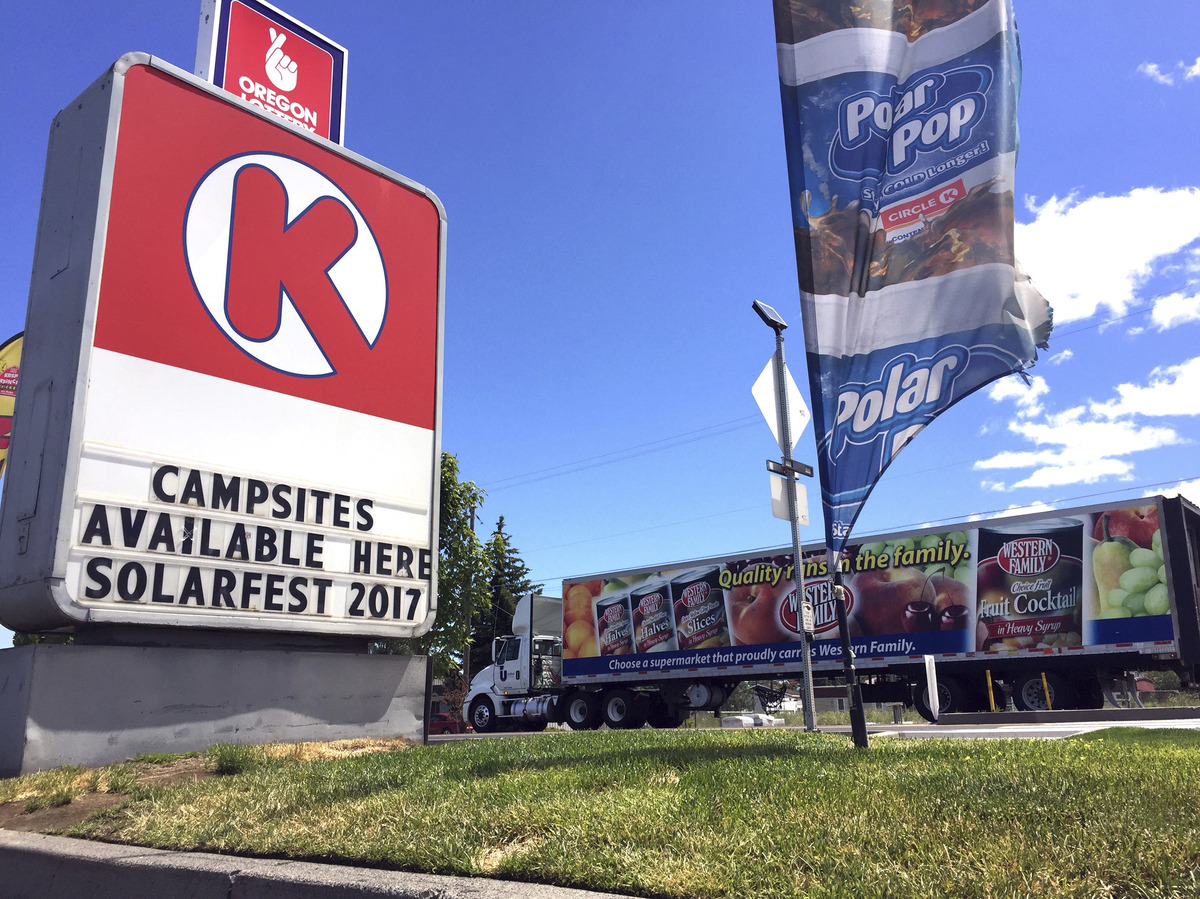 A June ad for campsites in the small town of Madras, Ore., anticipates the influx of tourists expected in the prime viewing location for the Aug. 21 total solar eclipse.

On Monday, Aug. 21, a solar eclipse will be visible across America. The last time the contiguous United States saw a total eclipse was 1979, and it will be the first coast-to-coast solar eclipse in 99 years, reports The Associated Press.

A partial eclipse will be visible throughout the United States, according to NASA. But within a band that the agency is calling the "path of totality" stretching from Oregon to South Carolina, viewers will witness a total eclipse. And in many of those places, an eclipse industry is already booming.

The mayor of Hopkinsville, Ky., says his town has spent more than half a million dollars preparing for the event since learning 10 years ago that the area would be in the path of totality.

The town even has an eclipse coordinator.

"It'll look like twilight outside. You'll be able to see stars. Four planets will be visible — Venus, Jupiter, Mars and Mercury. You'll notice the temperature drop about 5 to 10 degrees," the coordinator, Brooke Jung, told the AP. "You'll notice that animals will get a little disoriented. Birds will think that it's nighttime and go in to roost. Some of the flowers and plants that close up at night will close up."

"If it's cloudy, then we'll just have to deal with that reality as best we can and help people get to other locations," Mayor Carter Hendricks told the AP. "But, if somehow we overprepare and we're underwhelmed by the crowd size, that's a big concern for me." 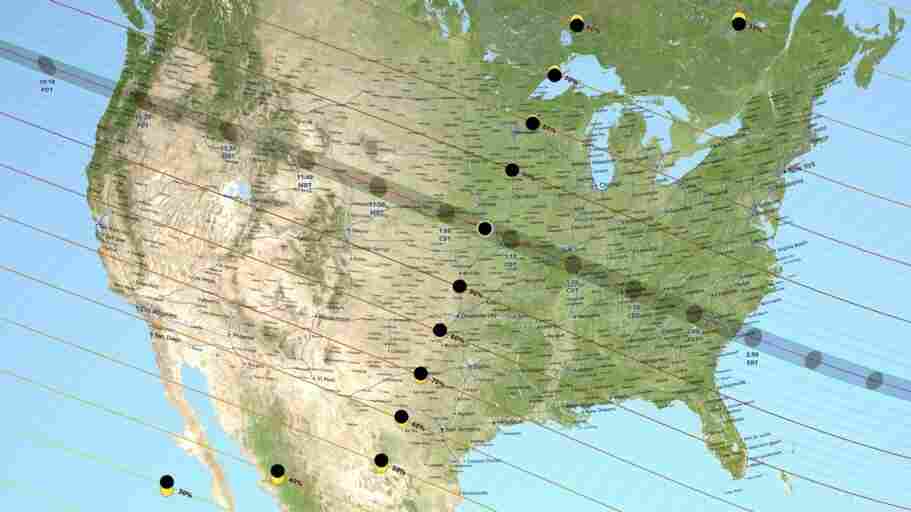 A map of the United States shows where and how much of the eclipse will be visible, including path of totality from Oregon to South Carolina. NASA hide caption 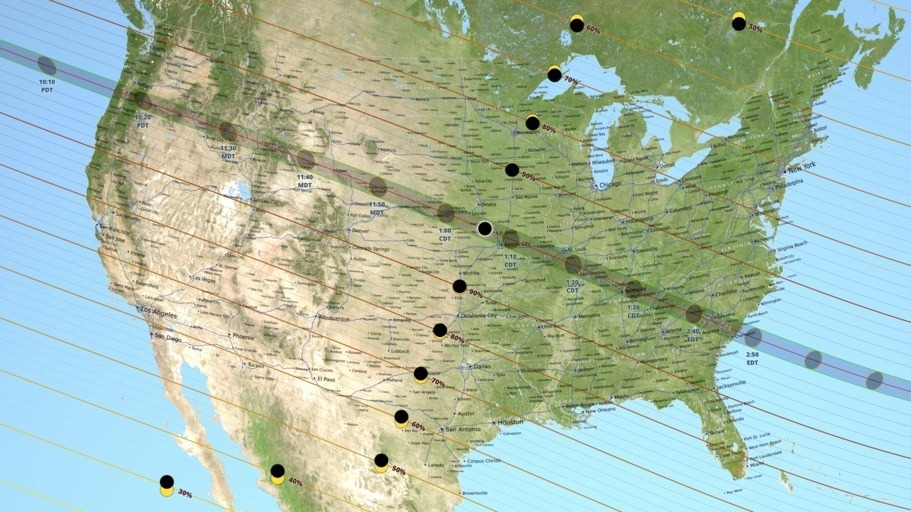 A map of the United States shows where and how much of the eclipse will be visible, including path of totality from Oregon to South Carolina.

Homes on Airbnb that are being rented specifically for the eclipse are going for thousands of dollars a night, like this one, in Casper, Wyo.

Perryville, Mo., is also on the path of total eclipse. "We don't normally rent out our house because this is not normally a tourist destination," the town's public works director, Mark Brown, told the St. Louis-Post Dispatch. He said he had listed his house on Airbnb for $2,500 a night during the eclipse, with a three-night minimum.

"We don't want to give up our house," he told the newspaper, "but everybody's got a number."

The Charleston Post and Courier reports that a million people are expected to visit South Carolina for the eclipse. Charleston's visitors bureau has set up a website listing area viewing events and hotel packages. Total eclipse will occur there at 2:48 p.m. ET, according to NASA.

"Highway 17 will be gridlock," College of Charleston astrophysicist Laura Penny told the newspaper. "If you're in the path of totality, you're better off watching it right where you are. But if you're in an area where the sun is even 99.9 percent covered, it won't be the same thing. You have to get inside the path of totality to experience the phenomenon of darkness in the middle of the day."

Oregon will be a major hot spot for eclipse watchers. Viewers there will experience the total eclipse first, with Salem and Corvallis in the path of totality at 10:18 a.m. PT.

Like South Carolina, the state is bracing for a massive influx of visitors. Up to a million people are expected to travel to Oregon for the event, the AP reports, and the area around the small town of Madras is expected to draw 100,000 people — with the potential for out-of-this-world traffic jams.

"Bring extra water, bring food. You need to be prepared to be able to survive on your own for 24 to 48 to 72 hours, just like you would in any sort of emergency," Dave Thompson, spokesman for the Oregon Department of Transportation, told news service. "This is pretty much a once-in-a-lifetime opportunity, and it's really worth seeing. But you've got to be prepared or you won't enjoy it."

Authorities in the state worry that if it gets foggy, people will decide to head east at the last moment, creating chaos on the roads.

The Oregonian reports that all of Oregon's reservable campgrounds within the path of totality have been booked. The state released an extra 1,000 campsites in April, and those were booked within 90 minutes.

As a result, people without reservations may start showing up at the state's nonreservable campgrounds two weeks early, the paper reports:

" 'Don't just assume that your favorite spot is available,' Traci Weaver, a fire communications specialist for the forest service and [Bureau of Land Management], said. 'Don't just have a plan, but have a plan A, B, C and D.'

"Weaver said her worst case scenario is campers losing patience and getting into verbal or physical altercations over campsites — a situation that could be exacerbated by the August heat. Unprepared travelers are also a concern, especially considering most of the non-reservable campgrounds are remote, and often don't provide drinking water or toilets. ...

" 'I keep hoping this will be like Y2K,' [BLM district manager Don] Gonzalez said — a big bust after months of concern. 'We want everybody to get along ... just enjoy your federal lands.' "

Travel website Atlas Obscura is organizing a festival around the eclipse in eastern Oregon. While it's clear that scores of people will flock to areas of total eclipse across the country, Atlas Obscura is spinning its fest as a rare chance: "The Path of Totality — where you can experience the eclipse in full — is quite narrow, and our campsite in Eastern Oregon's high desert is one of the few places in the country with a history of clear weather and where full viewing is anticipated. As a result, existing lodging in this desirable region is already scarce."

But, it adds, "we obviously can't guarantee the weather, and no refunds or exchanges will be possible under any conditions."

And in case you were wondering: Yes, there will be glamping, and no, it won't be cheap. The Deluxe Canvas Bell Tent for 2 will run you $1,500, not including admission fees.

In Madras, a town of 6,500, local event planner Lysa Vattimo has been hired to be the city's eclipse planner. She told The Oregonian that the town will spend at least $100,000 to manage the throngs eclipse chasers.

"We had to manage this from a safety standpoint," she said. "The people were coming. We couldn't stop them."

Editor's note on July 3: We noted earlier that, much like the ill-fated Fyre Festival, the organizers of the Atlas Obscura festival aren't yet revealing its exact location. David Plotz, CEO of Atlas Obscura, tells us there's a reason: Local officials have asked that the location be closely guarded to keep non-ticket holders from creating traffic jams on the day of the eclipse. We did not mean to imply that the Atlas Obscura festival is like the failed Fyre Festival in any serious way.