Accessibility links
Anti-Globalization Protests Spark Violence In Hamburg For Second Day : The Two-Way Activists continued protests in the German city as the summit of the world's major economic powers got underway. 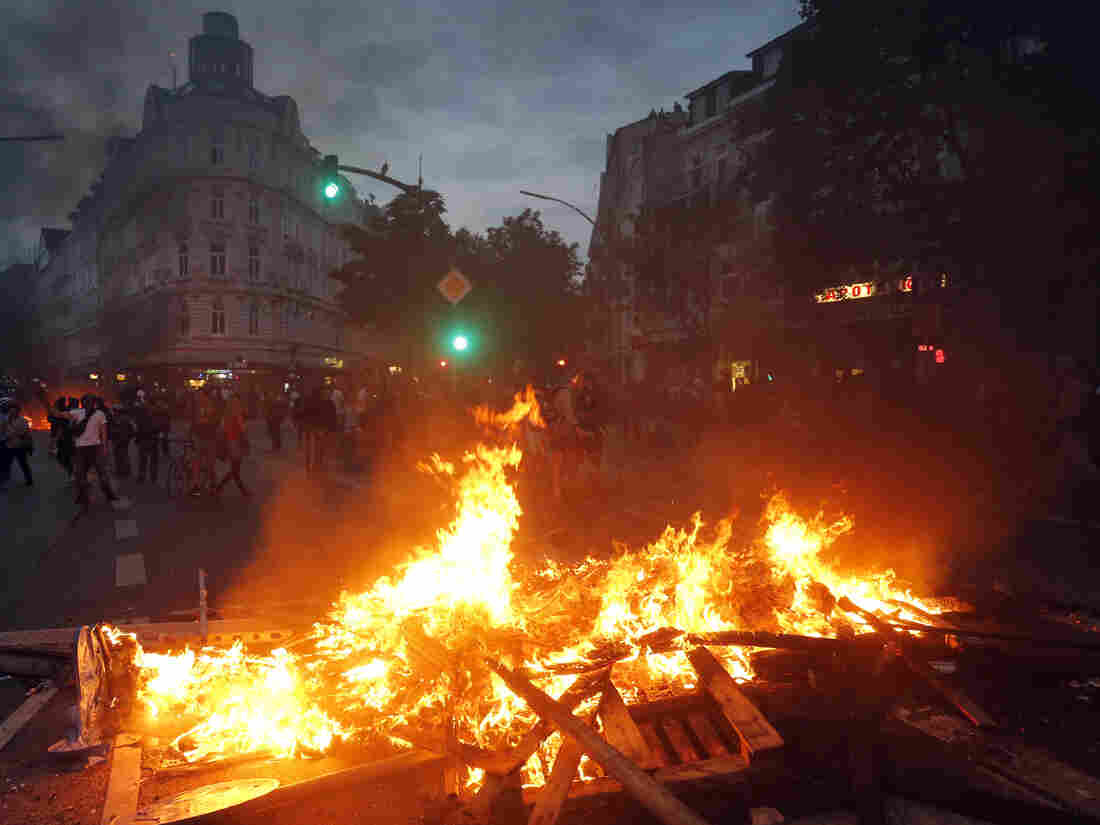 A barricade is set on fire during a protest against the G-20 summit in Hamburg, northern Germany, on Friday. Michael Probst/AP hide caption 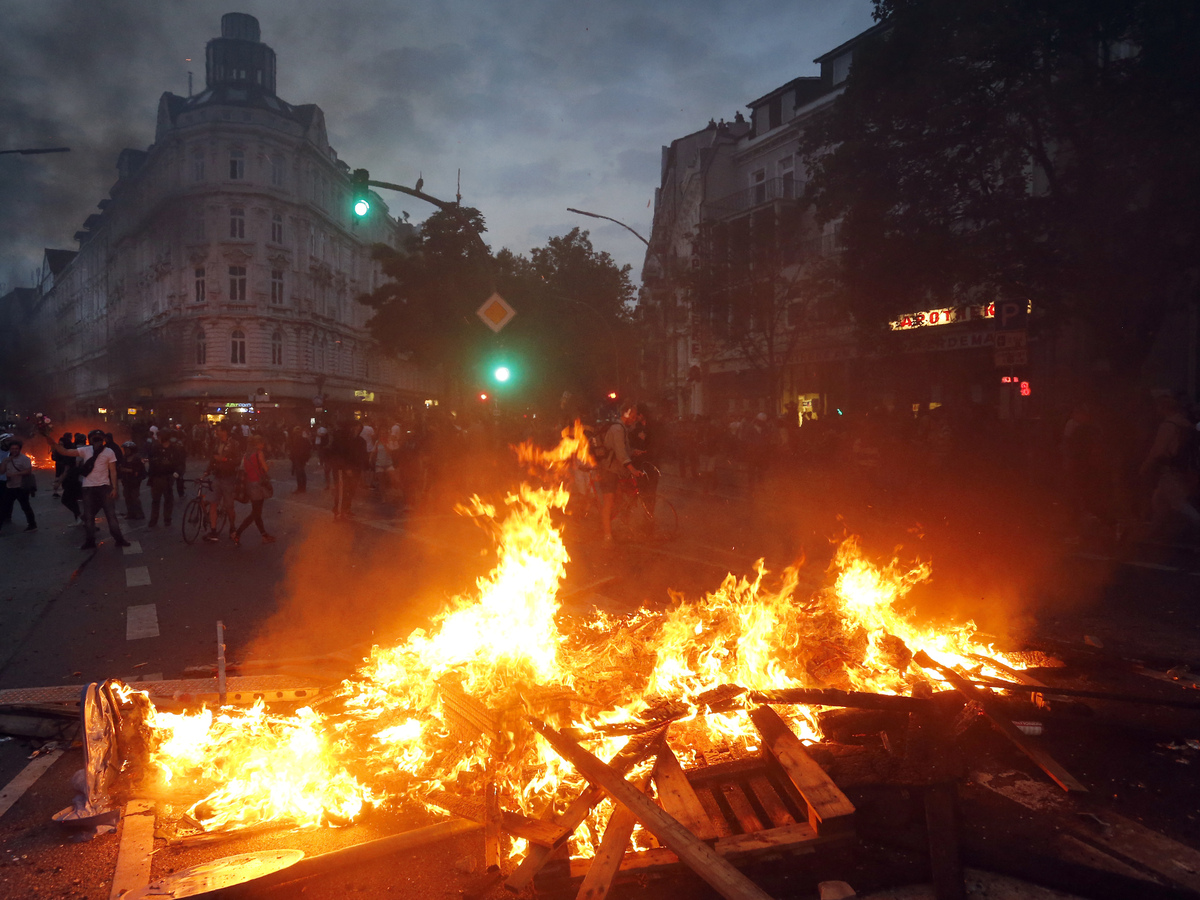 A barricade is set on fire during a protest against the G-20 summit in Hamburg, northern Germany, on Friday.

Smoke and flames rose from the streets of Hamburg for a second day Friday amid the start of the Group of 20 summit of the world's leading economic powers.

Police battled protesters, including some who threw gasoline bombs, set vehicles on fire and tried to storm the convention center where world leaders were meeting. Many other demonstrators were peaceful.

The Associated Press reports that police ordered nearly 1,000 additional officers to add to the 20,000 already reportedly on duty in the northern German city. 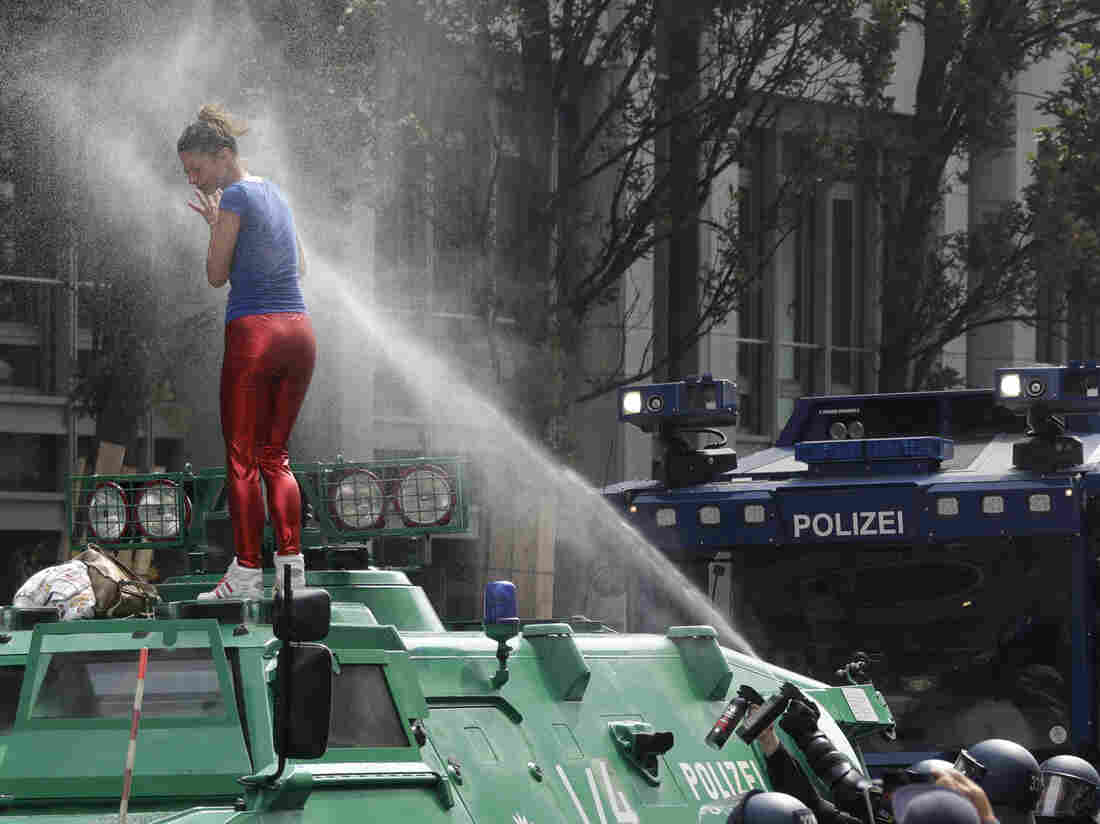 A woman is pepper-sprayed by police after she climbed onto an armored vehicle on the first day of the Group of 20 summit in Hamburg, Germany. Matthias Schrader/AP hide caption 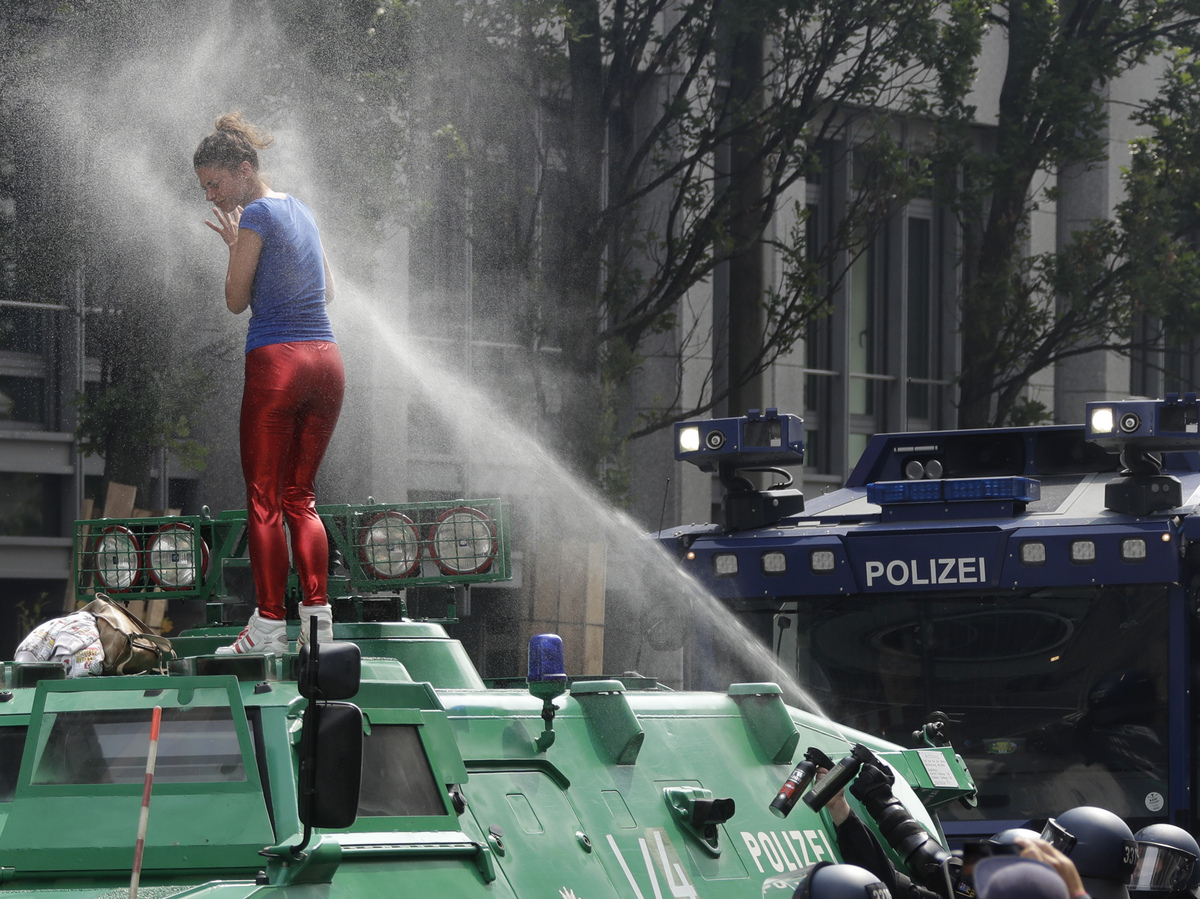 A woman is pepper-sprayed by police after she climbed onto an armored vehicle on the first day of the Group of 20 summit in Hamburg, Germany.

AP says that "196 police officers were injured, dozens of activists had to be taken to the hospital and more than 70 protesters were detained."

German Chancellor Angela Merkel said that she had "every understanding for peaceful demonstrations," but that "violent demonstrations endanger human lives, they endanger people themselves, they put police officers and security forces in danger, put residents in danger, and so that is unacceptable."

"Thousands of officers in full riot gear patrolled as many as 30 different protest marches. Most of the demonstrations were peaceful and creative, but some rioters threw gasoline bombs, iron rods and cobble stones through the city.

"As night fell, some lit fires in the streets of the city's Schanzenviertel neighborhood."

Police, who say protesters touched off the violence that began on Thursday by hurling rocks at officers, responded with pepper spray and water cannons.

As The Two-Way's Amy Held wrote Thursday, "Police had predicted there would be some 100,000 demonstrators. But German Interior Minister Thomas de Maiziere said earlier in the week that the city was bracing for up to 8,000 potentially violent protesters."

NPR's Soraya Sarhaddi Nelson described the protesters, saying some of them identify as anti-fascist activists and hail from Germany. But she said another group that police believe is most responsible for the violence, arrived by train from Switzerland.

"Some want the G-20 dissolved because they say it doesn't represent any of the countries whose fates are being decided at this summit," Soraya says. "Others want the focus [of the summit] to be on climate change. Then you have others wanting rights for specific groups, be they women, refugees or oppressed minorities."

Thinking of those hurt in #Hamburg protests. Hope everyone stay safe! #G20

Because of the protests, first lady Melania Trump was unable to immediately join the president at the summit venue earlier Friday.

The first lady's spokeswoman, Stephanie Grisham, told reporters in Hamburg that police there "couldn't provide clearance for us to leave."