Accessibility links
The New Syrian Cease-Fire Isn't That New : The Two-Way The pact between the U.S. and Russia that includes Jordan and Israel, and affects southwest Syria, would be the fifth such effort to halt fighting there. 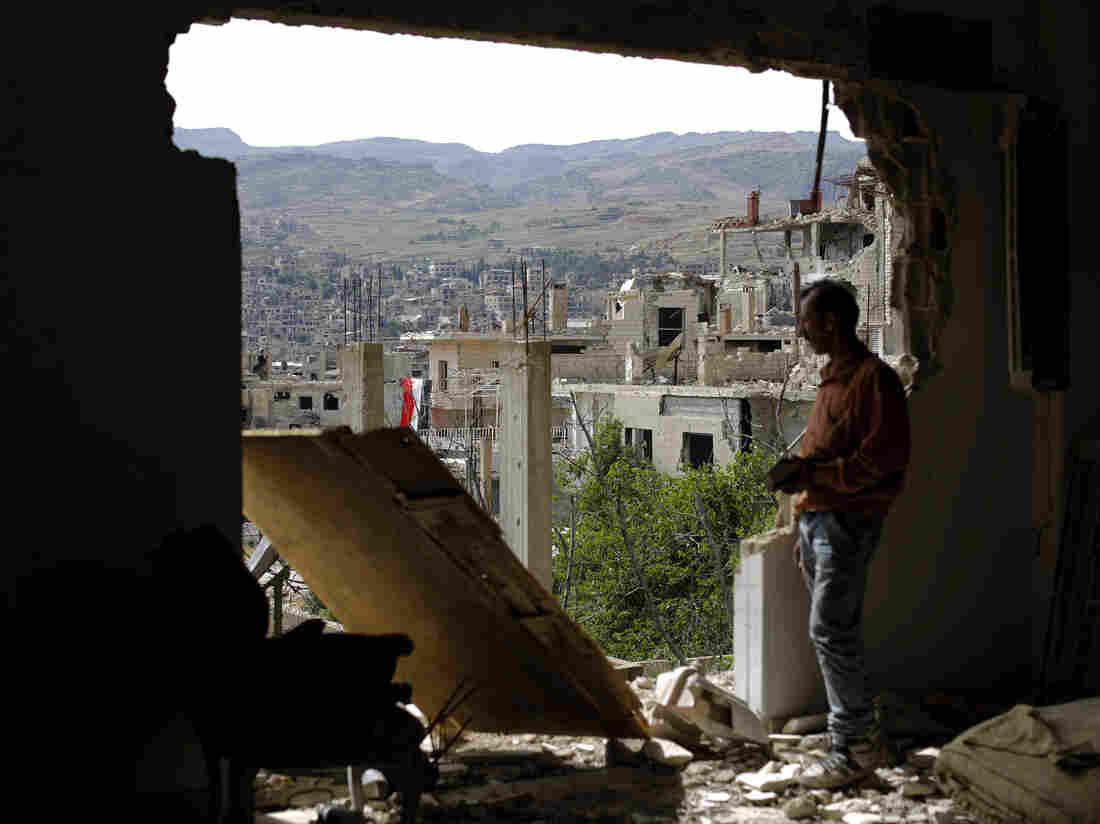 A man looks out of a damaged building in the mountain resort town of Zabadani, Syria, in the Damascus countryside, in May. The U.S. and Russia announced a new cease-fire deal on Friday. Hassan Ammar/AP hide caption 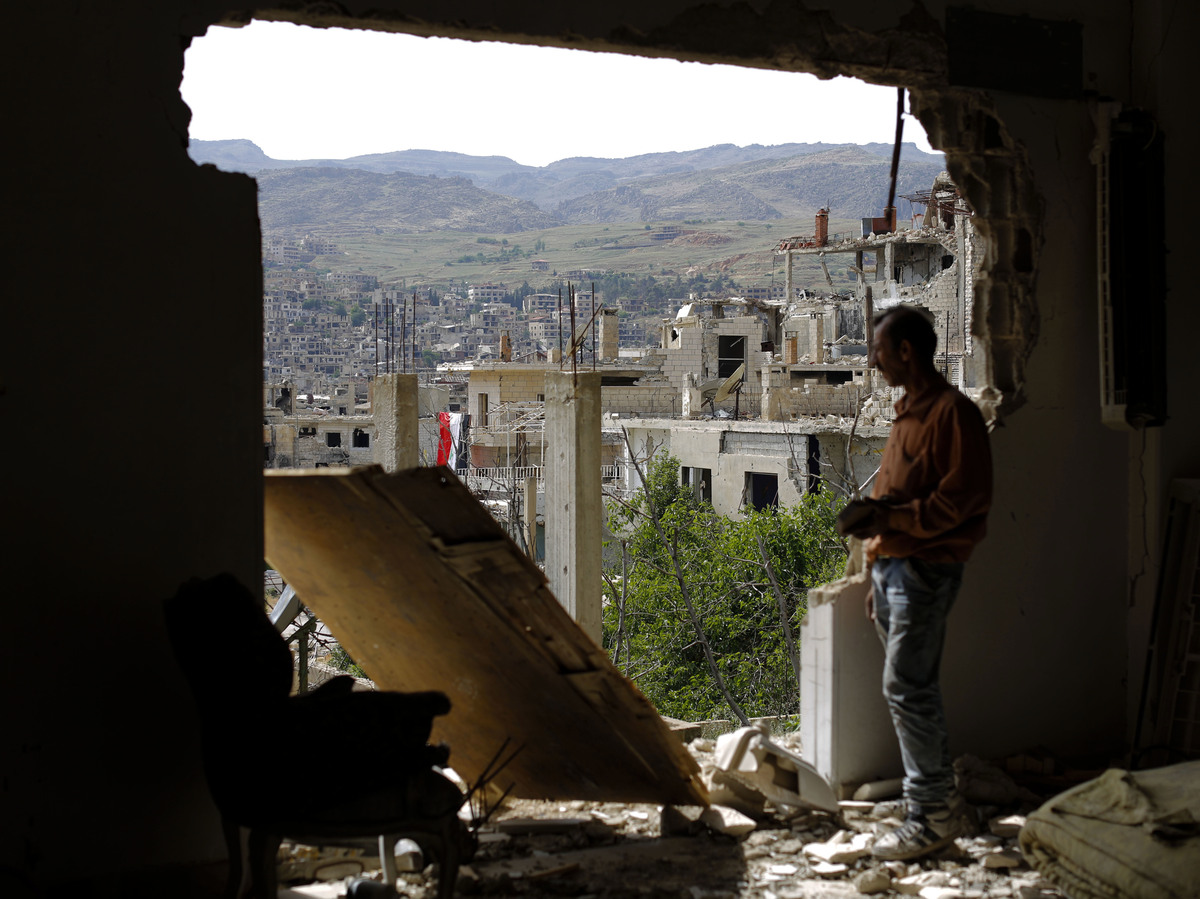 A man looks out of a damaged building in the mountain resort town of Zabadani, Syria, in the Damascus countryside, in May. The U.S. and Russia announced a new cease-fire deal on Friday.

If you think you've heard this story before – you have. Friday's announcement that the U.S. and Russia reached an agreement to halt the fighting in Syria isn't exactly new. If you've been paying attention, you've heard it all before – in fact four times before.

Secretary of State Rex Tillerson, speaking to reporters in Hamburg, Germany, tacitly acknowledged that it was difficult to put a fresh spin on the latest cease-fire deal.

"I would say that what may be different this time is the level of commitment on the part of the Russian government," Tillerson said. The Russians, he said, "see the situation in Syria transitioning from the defeat of ISIS ... to this discussion with them as to what do we do to stabilize Syria once the war against ISIS is won."

And this meshing of interests (if that really is the case) is key to making a cease-fire stick, not just in Syria, but anywhere, says Paul Floyd, a senior military analyst Stratfor, which consults on global intelligence matters.

Cease-fires, it turns out, are fragile affairs and almost by definition they're only expected to have a limited shelf life. But even if the big players can agree on a set of goals, "cease-fires are really made or broken by the guy with his finger on the trigger," Floyd tells NPR. "Oftentimes, the interests of the players on the ground and the players at the top don't align, and that doesn't bode well for the survival of a cease-fire agreement."

The more actors there are at the negotiating table and on the ground, the harder it is to forge a workable agreement, he says. "Syria is a perfect example — you don't have two parties, you have three, four, five. All they all have different interests in play."

Floyd says that mutual trust is the mortar that hold a cease-fire together. In Syria, that's a commodity in very short supply. He says it gets worse with each failed attempt, as has happened repeatedly there.

Since early 2016, there have been four attempts to broker cease-fire deals involving various groups and state actors. All but one collapsed outright and the last is only working by degrees:

— A cease-fire that went into effect in February 2016 involved the United States and Russia. A month later, Russian President Vladimir Putin announced that Russia would pull out of the pact as Moscow backed a push by Syrian-government forces to retake territory captured by the Islamic State. At the time, NPR's Alice Fordham put the difficulty of a lasting truce this way: The parties, she said, "have ... raised concerns that there's no consequences for violations. And they've shown a reluctance to really look beyond the first few steps of this sequential plan because they say ... we have to understand that there really will be a cease-fire."

— Another deal was done in September between Russian Foreign Minister Sergey Lavrov and then-U.S. Secretary of State John Kerry. It didn't last long. It was difficult even for Kerry to be optimistic about the outcome. NPR wrote when the announcement was made that the U.S. secretary of state noted "the history of [failure] ... and warned that the implementation of this new [cease-fire] is far from guaranteed."

— In December of last year, Turkey and Russia agreed to a truce. It unraveled quickly. When the cease-fire was announced, analyst Aron Lund told NPR, "If there's good faith on both sides here, then maybe. But good faith - Russia, Iran, Turkey - I don't know."

— And barely two months ago, Russia, Iran and Turkey signed an agreement in Astana, Kazakhstan, to create "de-escalation" zones. Although these zones have enjoyed some success, there's much confusion about their boundaries and not infrequently, violations that result in more bloodshed. As we reported at the time, the watchdog group Syrian Observatory for Human Rights said that airstrikes had dropped off in the protected zones but that government forces continued to consolidate gains near the capital.